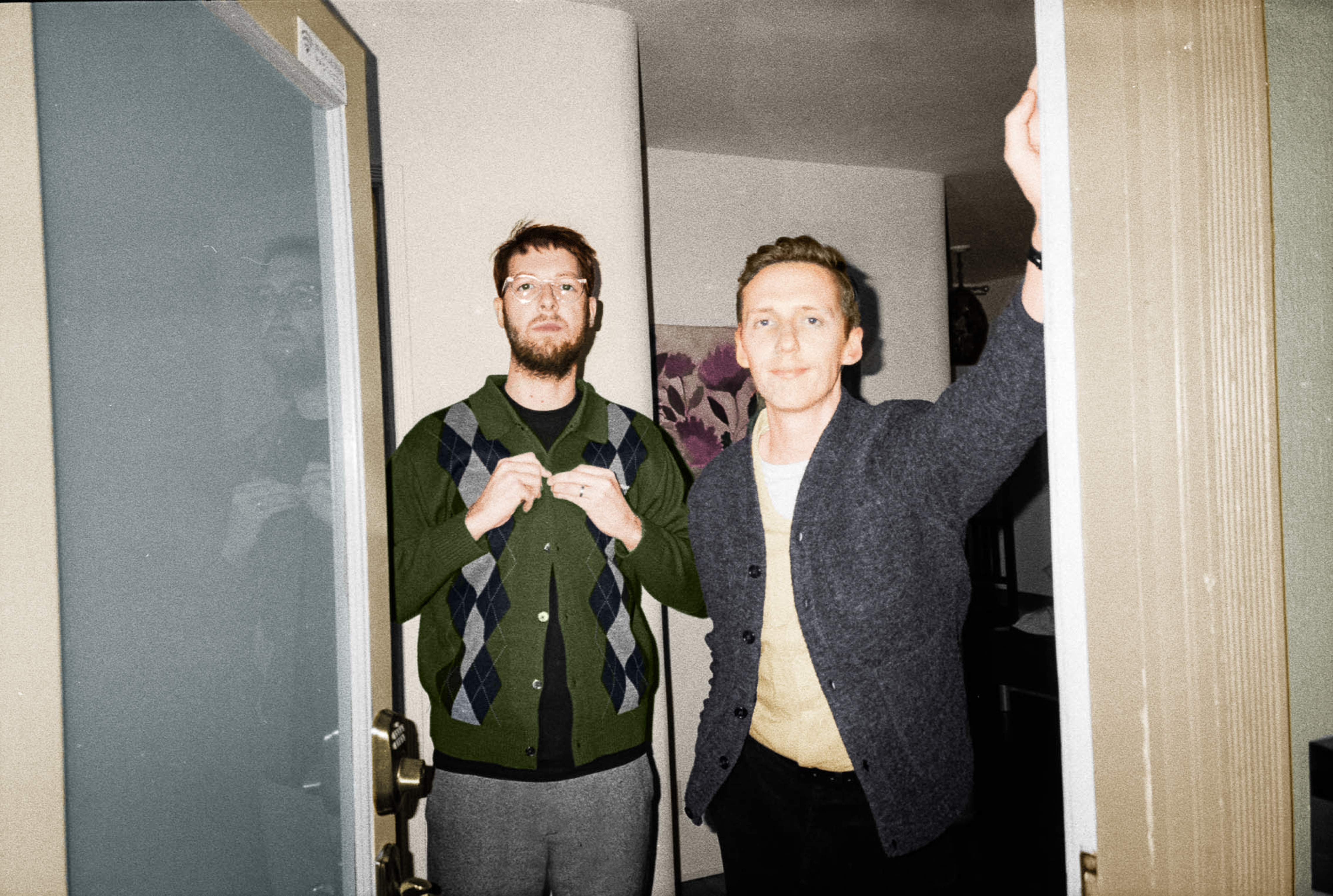 Emerging from the success of their previous album Love Me/Love Me Not, HONNE debuts a more mellow and intimate perspective of love and relationships through their latest mixtape, no song without you.

Complemented by soft instrumentals and delicate electro compositions, HONNE’s vocal and lyrical prowess are on full display in this recent mixtape. Their songs act as love letters to their significant other as well as reminders for the listeners to cherish one another, especially in times of hardship.

Since the pandemic has forged a barrier between Malaysians from seeing HONNE live, like the time they performed for Good Vibes Festival in 2018, JUICE had a conversation with Andy and James, so they can share their experiences and thought-process behind creating no song without you.

A secret little feature was also snuck into the mixtape in the form ‘iloveyoumorethanicansay’ which was actually sung by 88 Rising’s Niki Zefanya, whom the duo are huge fans of. You can’t really tell though due to the heavy reverb, but if you’re a fan of Niki’s, you’ll notice her runs.

The stand-outs of the mixtape are definitely ‘by my side’, an optimistic piano ballad about unconditional love, ‘la la la that’s how it goes’, a cute jingle about synching with your partner even when they go off-beat as well as ‘s o c i a l d i s t a n c i n g’, a cleverly-named break-up anthem for us currently in lockdown.

Listen to these bops below:

In JUICE’s interview with HONNE, we decided to ask Andy (A) and James (J) about the animated aesthetic behind their series of new music videos as well as get to know their sensitive side by asking them their favourite break-up songs and love languages.

Here’s what they said…

Hi guys! I don’t know if you remember this but you came to Malaysia and performed for Good Vibes Festival…
Both: Of course!

Well, a lot of Malaysians were introduced to you through Good Vibes. At the time, your album was more upbeat and easy to jam to, but this mixtape is more mellow and intimate. What caused the shift?
A: I don’t think there was any real thought-process behind it. I think things kind of tend to happen naturally in many ways. It was maybe the timing of it all and we finished the mixtape during lockdown here in the U.K., so maybe that had an influence on where the music ended-up. I feel like we’ve been mulling over this kind of style for a little while and yeah, it just happened to be at this time.

So, it definitely had something to do with the pandemic?
A: Yeah, I think it’s whatever that’s around us, be it a global pandemic or the weather or other things that happen in our lives, obviously seep one way or another into the music that we write.

Cool. So, this is kind of related to the pandemic but, HONNE has definitely created some of the best break-up anthems, in my opinion. And right now, at least in Malaysia, a lot of people are breaking-up!
A: Noo, that’s so sad!
J: Why? Is it because they’re forced to be in the same house together for ages? Is it because they’re at home and realise they don’t like their partner?

That’s one of them…
Both: (laughs)

But it’s mostly because they haven’t seen each other in a long time and long-distance relationships sort of affects everything. So, I just wanna know, what are some of your favourite break-up songs?
J: Well, it’s got to be ‘Crying Over You’ [by HONNE], isn’t it? It’s a classic! (laughs)
A: Yeah, ‘Crying Over You’ is good. Well, if we’re talking about our music, it’s not a break-up song but it’s on the mixtape, it’s called ‘one way to tokyo’. It’s a bit of a sad one. It makes me well-up a bit, but my mom cries to it every time she listens to it.
J: That’s so cute… Bless her.
A: Yeah. It’s about the time that I dropped my wife off to the airport when she was leaving to go to Tokyo for six months. So, that was a bit of a sad time, but it’s all good. She’s back now. (laughs)

Speaking about ‘one way to tokyo’, what is the most heartbreaking thing about saying goodbye?
A: We have to do it every time we go away on tour. I remember one of the (laughs), well you shouldn’t do it to yourself and you should be brief and just walk out the door, but one time, I was about to leave on tour and I was in the lift and my wife was outside and we were just waiting for the lift doors to close.
J: Oh no!

That’s like in a movie!
A: Yeah (laughs). Go on, James. Your turn.
J: I don’t know, I just don’t think speaking to someone on the internet or virtually is the same as being physically close to them and being able to touch them and see their face in person. It’s like a degree of removal and it makes it feel very different.

So, the hardest part is only seeing them on webcam and stuff like that?
J: Yeah, just not having that physical presence. That’s something really different that can never be replaced by anything virtual.

Speaking about that. Do you guys know what love languages are?
Both: Yeah (laughs)

So, ‘free love’ is basically not showing love through buying stuff, but by devoting yourself to one person, right? Do you guys have any love languages?
J: That’s a bit different for both of us, isn’t it Andy?
A: Yeah. It’s funny that you ask that question because there was a period of time on tour where everyone in our tour group was talking about what their love languages were and I can’t remember what we discussed but this is funny.
J: I think the things I appreciate the most are uninterrupted time, so someone dedicating their proper time to the moment we’re sharing and not being on their phone. And the other one was words of affirmation.
A: Yeah, I think that was definitely one for me as well.
J: Yeah, I think I need to be told that… [stammers]
A: How good you are?
J: Yeah, how great I am! (laughs) But funnily enough, for my girlfriend, it’s gifts and time. And for me gifts is not even on my radar. I do not care about gifts.

Wow!
J: I think a lot of my guy friends are very similar. Like we have to force ourselves to remember to buy gifts.
A: I feel like gifts can blend into putting in effort. For me, you don’t have to go out and buy the most expensive thing. Even if it’s a note that you’ve written, it’s good to know that you’re still putting in effort.
J: Or just sending a bunch of flowers whilst we’re away. We do try and do stuff like that. (laughs) These love languages are kinda fun. It’s really interesting speaking to a group of friends and seeing what everyone is and how your communication can breakdown when you’re not giving people those things, even on a friendship level as well. When you’re on your phone, you don’t realise how much the other person would appreciate you not doing that or would appreciate you saying you look good that day or whatever.

Yeah, it’s really interesting how everyone has a different thing and we all just recently started talking about it…
J: Yeah! What’s yours?

We do! But it’s so expensive here…
J: Yeah, my girlfriend asked for that for Christmas and I got it for her but it was well-expensive. (laughs)

So, moving on to our final question. The last song ‘smile more x3’ is an important PSA especially during these times, and the video is also really cute. What made you feel you had to list these things down?
A: So, we had these words for about a year and a half so obviously before the coronavirus. We wanted to use them in some way but we didn’t have the music necessarily to fit with it and it was just a case of trial and error when we eventually came up with the music that works. In terms of the words, it was kind of a reminder to ourselves of what we can change and do to just make us happier. It’s a nice message and we just wanted to include it on the album.

I especially like the video, it’s really cute!
J: Yeah, it’s animated by a girl called Holly Warburton who did all the videos for this mixtape. We wanted it to be quite literal, so what comes up on the video are what the words are saying.

HONNE is not only a lot of fun to talk to, but their music is equally as fantastic as they are.

For more music, JUICE has some catchy tunes.

WATCH: Brendan de Cruz Sings About The Struggles Of Friendship In “Evermore”

‘I Am Not Billie Eilish’ is out now!

No one else can wear your crown

A quick chat with the vocalist of the band.