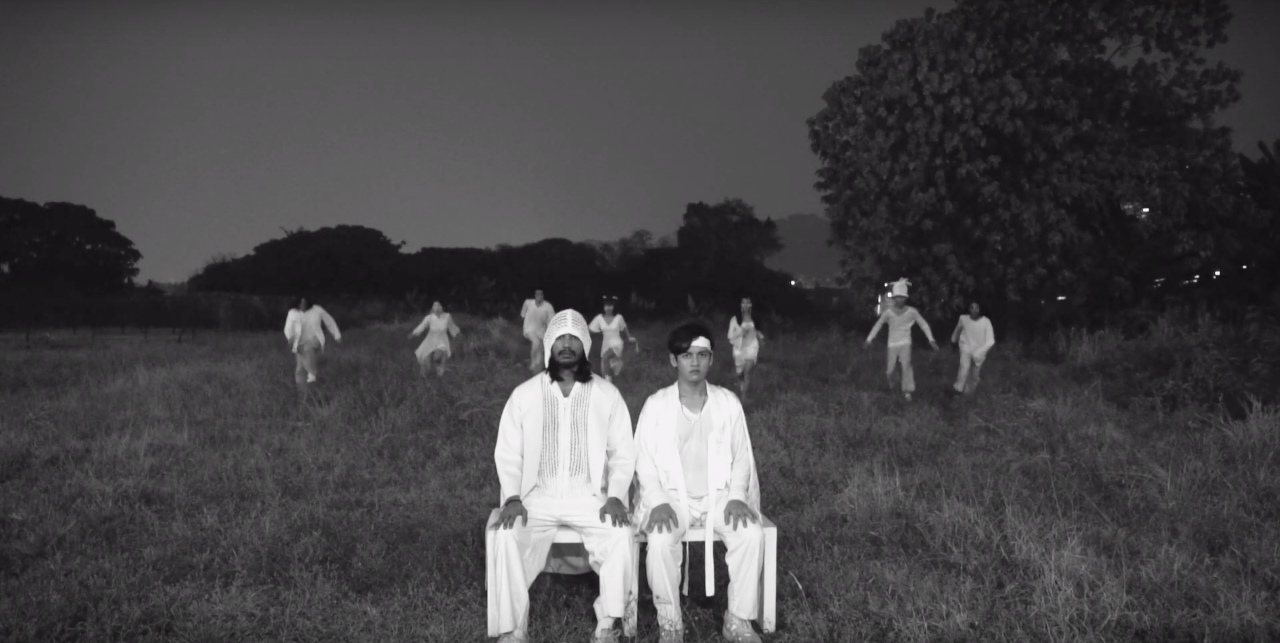 Jaggfuzzbeats are back from their hiatus, releasing their new single, ‘Fade’, that features the signature idiosyncratic vocals from lead singer, Azrul, alongside the unique pulse from drummer, Omar. Adorned in white, the band dances in a derelict field with a murky backdrop of the city, as they sing about the plights of modern folks, striving to keep afloat in a sink-or-swim world.

Arguably their most cinematic music video, JUICE was interested in their sudden shift from vibrant colours to monotone grunge. We got the chance to chat with Azrul and Omar as well as the creative minds over at Rocketmob who helped translate their vision for ‘Fade’ into a kinetic assemblage of dance and visual imagery.

‘Fade’ is noticeably different from all your other music videos. What was the idea behind the concept for ‘Fade’?
ROCKETMOB: Concept wise, we were given full creative control by Jaggfuzzbeats to execute this video. When Azrul first sent us the track, the trailer for Midsommar just came out. The trailer alone basically inspired this music video in terms of concept. With ‘Fade’, we wanted to flesh out a cult mood board as the visuals & play around with choreography. We did not intend for a specific storyline as a whole, but to subtly fit multiple plots within the visual.

Your last single ‘In Time’ had a more optimistic feel to it. Would you say ‘Fade’ is the single’s darker, more pessimistic sibling or are they completely distinct from one another?
JAGGFUZZBEATS: They’re definitely distinct from one another. ‘In Time’ depicts getting back up from your failures while ‘Fade’ is about having to deal with worldly matters to reach your dreams.

From an onlooker’s perspective, the lyrics to ‘Fade’ tell a very relatable story of pursuing a joyless path in life in order to pay the bills and keep food on the table. Is that the real intention behind the lyrics or is there something more to it?
JAGGFUZZBEATS: Haha you’re actually spot on! We were definitely going through that and we feel like a lot of people do too.

When watching the music video, I can’t help but get occultist Manson-vibes. Is that a visual suggestion towards a society that is blindly following orders from an anonymous leader?
ROCKETMOB: Nope haha we just thought the Midsommar trailer was cool. There isn’t any darker meaning behind the visuals.

There are numerous uses of plastic to suffocate the actors in the video as well as self-choking. What is the intention behind this?
ROCKETMOB: The use of plastic is actually evident in most of our videos. We just like experimenting with materials to give more texture on screen. It was purely visual purpose to elevate the scenes. We think it worked.

In the video, it’s as if the actors are performing a type of ritual surrounding you. What kind of ritual are they performing and what does it hint to?
ROCKETMOB: Not any specific ritual unfortunately haha. The whole video was just a choreographed performance. The actors did really well!

The grungey black-and-white atmosphere of the video is reminiscent of horror classics, especially Begotten which was touted as one of the most disturbing films of all time. Is there a reason for this visual?
ROCKETMOB: Yes! We did go through a lot of horror classics during the editing process of the video but we already had a clear aesthetic for the visuals when we first heard the track. We personally felt that ‘Fade’ would fit really well with the aesthetic as it had a movie soundtrack feel to it.

Towards the end, it gets more erratic before concluding with a blast of confetti. Does ‘Fade’ have a hopeful ending?
ROCKETMOB: Yes! We wanted to give a light ending so people don’t take the video too seriously. We just had fun making it.

In light of the new single release, will there be an album dropping soon from Jaggfuzzbeats?
JAGGFUZZBEATS: Yes! Our upcoming album is in the works and will be dropping in 2020.

I think we’ve exhausted all questions regarding the project. I wanna ask something a little bit more fun. Due to the occultist vibes, are you currently watching any good true-crime shows/movies or is that a genre you don’t lean towards? If no, are there any good horror shows/movies to recommend?
JAGGFUZZBEATS: Mindhunter! It’s such a good crime series. And for a horror movie, we recommend watching Hereditary.

The decade is closing in, what are your best memories as Jaggfuzzbeats throughout the years?
Launching an album, playing all the shows tak kisah kecil or besar and meeting all the lovely people throughout this musical journey. The past years have been kind to us and we’re truly blessed for that.

To wrap things up, name some local artists/albums that made an impact on your sound within this decade.
Pitahati – Fonetik Anak Candal
Orang
The Fridays – Verklempt
Iqbal M.
We are also always inspired by the new waves of local acts such as Midnight Fusic, lost.spaces and Allester Shaun.

For more interviews with your favourite artists, choose JUICE.