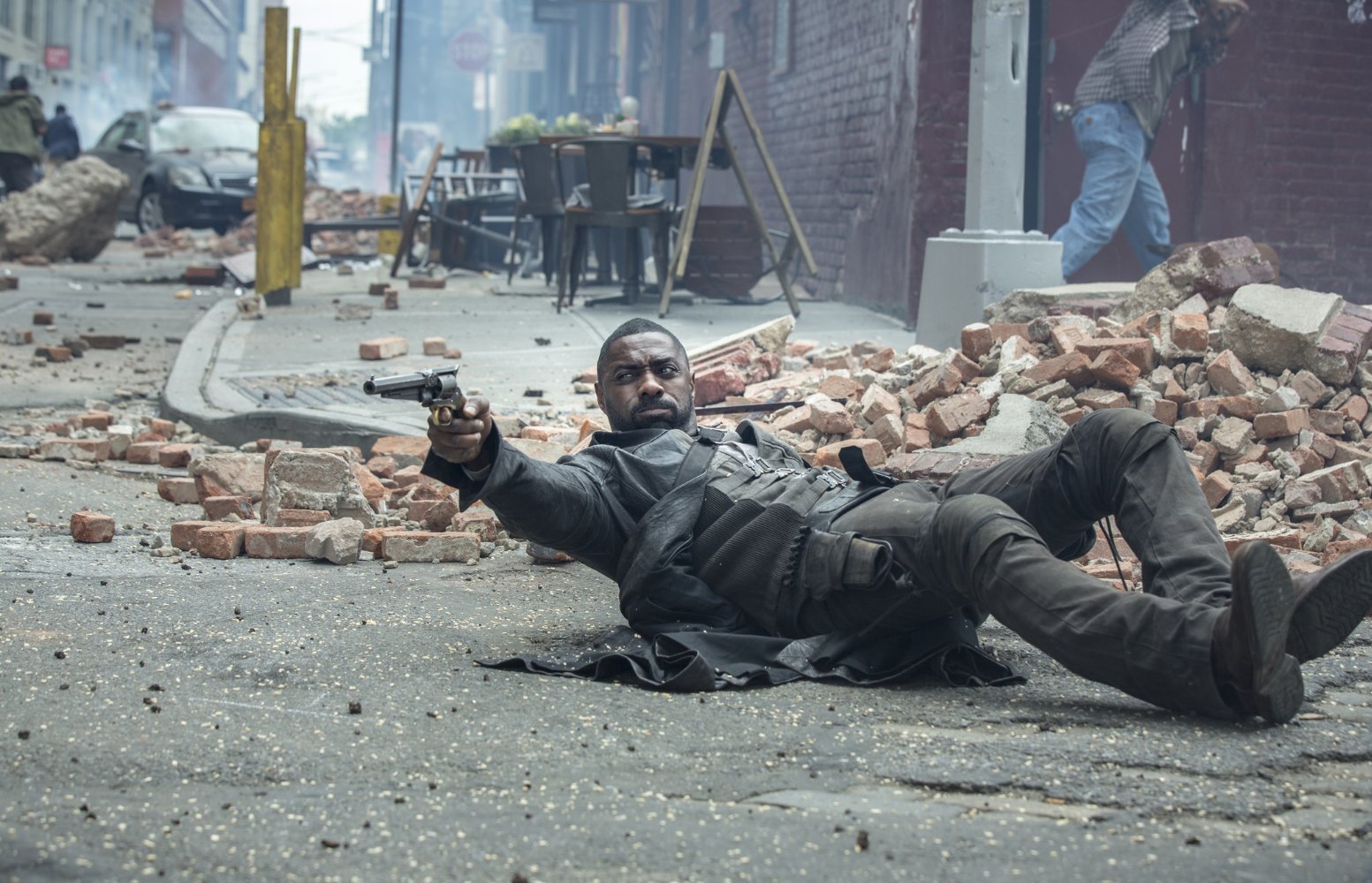 For a movie that took years to get greenlit, The Dark Tower generated an extreme amount of hype prior to its release. It’s a film whose source material precedes itself – legendary horror/sci-fi author Stephen King penned the series of eight novels on which the movie is based, and the series itself has long since been a staple favourite amongst both fans of King, and fans of the sci-fi and fantasy genres. After spending years in developmental hell at Sony Pictures, the announcement that The Dark Tower would at long last be released in 2017 set the Internet abuzz with expectation. If it took more than six years to work on the project, surely the film would be finely polished; a new sci-fi gem set for greatness – or so people thought. Well, much like Sony Pictures have done with half the other movies they’ve put out this year, expectations have been shattered and hopeful fans’ hearts have been broken with all the grace of a brick being thrown at a glass pane. The Dark Tower may not be the worst movie of the year – that doozy of a title goes to none other than The Emoji Movie, which Sony Pictures also produced – but it certainly may prove to be the most disappointing one yet.

Much like most other people out there, I desperately wanted to enjoy The Dark Tower. Its premise alone sounded phenomenal – a sci-fi and fantasy epic with near-invincible gunslingers, sorcerers, psychics, strange futuristic technology, and all with loose links to the Arthurian myths and legends. Going into more detail, the plot gets a little more convoluted, however. Roland Deschain, the last in a line of legendary gunslingers, is locked in a battle against his arch-nemesis, the sorcerer Walter Padick (better known as The Man in Black), to ensure that a mysterious monolithic building at the centre of the universe (the titular Dark Tower) remains standing as a beacon warding off the forces of an otherworldly evil. Caught in the midst of this war are several tribes of villagers living in Mid-World (an alternate world parallel to our own existence) as well as the whole of Earth itself, and the countless other dimensions existing around the Dark Tower. Still not making much sense? Don’t worry, it’s understandable. Stephen King had eight whole novels over which to flesh his many different worlds, races, and characters out. This, however, is where The Dark Tower makes its first and foremost failure – by attempting to cram eight whole novels’ worth of lore into a movie that barely lasts two hours, and expecting the audience to remain engaged, as opposed to confused and slightly disorientated.

Despite having Stephen King to credit for the film’s premise and story, if you’d gone in not knowing that this was an adaptation of his novel, you might never have guessed it. King is an author known for his masterful crafting of suspense and mysticism, but the movie simply piles on cliché after cliché and hopes it’ll be stable enough to call it a “story” – hint: it isn’t. Name any Hollywood cliché; I’ll bet you The Dark Tower has it. Is the main character a troubled child and an outcast at school? Check. Does the troubled child have issues with their step-parent, and miss their dead biological parent? Check. Does the troubled child also have nightmares regarding the fantasy world at the crux of the film? Check. Is the troubled child being forced into receiving psychological treatment for those dreams? Check. Does that “treatment” turn out to be the bad guys in disguise, waiting to abduct him? Check. Does the troubled child somehow escape and chance across the hero of the story, against all odds? Check and check. I could go on and on, but you’re probably getting the picture. The Dark Tower is predictable and kitschy at every step of the way. In fact, it could even be considered a stain on King’s good name in the world of fiction.

You’d think that Sony Pictures would’ve learnt something from its previous phenomenal failures this year (to name a few – Baywatch and The Emoji Movie), but they clearly haven’t. For a series of novels so rich in characterisation and world-building, The Dark Tower completely fails on that front. The film’s versions of Roland, The Man In Black, and all the other Mid-World characters whose customs and backgrounds need fleshing out, are neglected completely. The Dark Tower itself is never truly explained – the fact that it remains central to the movie’s storyline eventually starts to feel completely pointless, because audiences unfamiliar with the books will simply have no idea what the hell it is.

As for Roland, Walter, and everyone else, they remain flimsy, cardboard cutouts instead of fully-developed characters. This leaves them as unrelatable, unempathetic, and completely unengaging stand-ins for actual “characters”, making The Dark Tower a highly dissatisfying experience. The only upside to the way the characters were written is the fact that the movie is racially diverse beyond expectations, and throws out the illusion that there are no people of colour in the fantasy world that Hollywood has long since perpetuated. It serves as a decent showcase of the untapped pool of talent – that people of colour could contribute to Hollywood, if it would let them – Claudia Kim, an up and coming South Korean actress, does a fairly good job as the psychic Arra. In light of this, the fact that the movie is so poorly written in turn does the movie’s talented cast a phenomenal disservice.

Idris Elba – who seems unable to land suitable roles for himself outside of Britain lately – is perhaps the best example of this. Elba didn’t only seem like the wrong choice for the role the minute he appeared onscreen, brooding and broken, but he also clearly didn’t have enough meat on his character to actually play anything more than a thin caricature of a mystical, gun-wielding warrior. Apart from the scenes in which Roland’s father meets an untimely death – which we are forced to watch not once, not twice, but too many times over the course of the movie’s 95-minute runtime – the scriptwriting doesn’t allow the audience to develop a shred of sympathy for Roland, whose character is written flatter than a Starbucks latte. For an actor with such an impressive portfolio, whose credits include critically acclaimed roles on The Wire, Luther, and Beasts of No Nation, Elba’s moody and often conflicted expressions during the film seemed more like a cry for help than mere acting. It’s almost as if he could tell how misused his talents were.

On the other hand, some kudos should go to Matthew McConaughey as The Man in Black for his excellent portrayal of the film’s insidious villain. McConaughey’s performance was as slinky and sleek as it was ruthless, and his smug taunting of Roland’s already vengeful and impetuous nature just about saves the movie from being completely unwatchable – though it remains far from enjoyable. Coming from someone who had, until now, thought McConaughey was only good for playing rednecks, farmers, or cowboys – cough, cough, Dallas Buyers Club – this was a refreshing change from his usual Southern shtick, and had the movie been written better or even stretched out over several instalments, perhaps the role could have been considered one of his best yet.

In the end, the best thing that The Dark Tower could do is serve as a gateway into the books for anyone who loved the idea that the film was based on, but hated the actual film. Considering six years of effort was put into getting this movie on the big screen, it is still much too insubstantial to make any impact at all on the ever-expanding catalogue of sci-fi and fantasy gems. Idris Elba deserved better, Matthew McConaughey deserved better, and Stephen King’s eight whopping novels deserved better. But at the end of the day, I suppose only King remains laughing (all the way to the bank). The moral of the story? Always read the books first to avoid critical levels of disappointment.

Not all bad movies are, well, bad. Here’s a list of bad movies that might actually have some entertainment value – provided you’re drunk enough.

If you’re looking for this year’s most enjoyable film, look no further than Baby Driver.

And if you think that all movies suck these days, here are some notable alternatives to TV’s Game of Thrones.