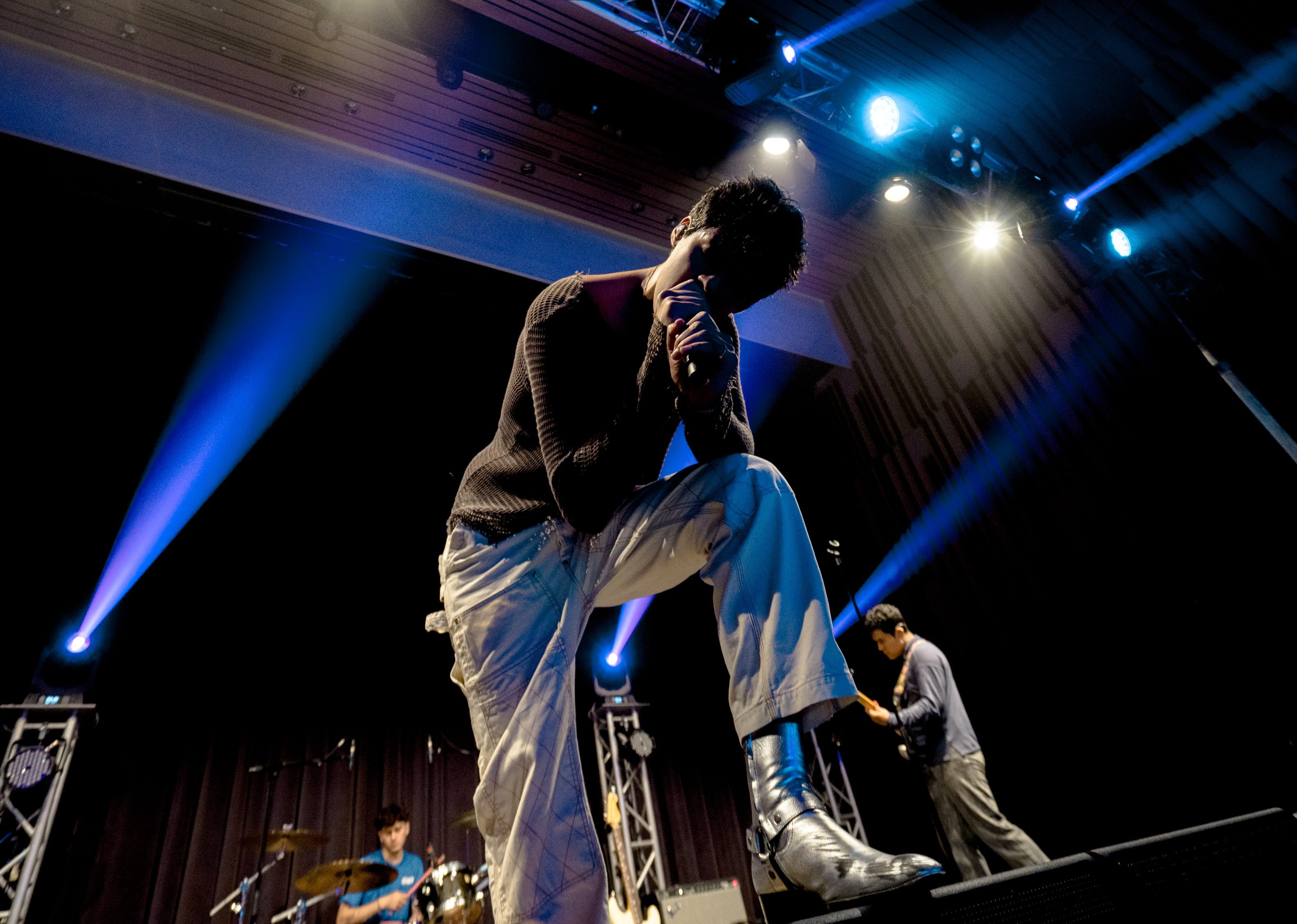 *All photos provided by Upfront

It’s crazy to think that neo-soul singer-songwriter, Omar Apollo has only been in the music scene for two years. Armed with little more than a guitar and laptop, his achievements so far have been impressive as he gained 15 million streams and complete back-to-back sellout headline tours last year.

From an attic in Indiana, Omar started his singing career by writing and recording his own mix of jazz, R&B, funk, alternative, soul, and pop music. It’s totally understandable why people are drawn to his craft from the get-go as his early songs like ‘Ugotme’ and ‘Erase’ shows his vulnerable lyrics and raw emotions. Paired with his sultry vocals and smooth runs – it’s a winning combination, kids!

Thanks to Upfront, JUICE got to see Omar live in Malaysia last week and it was one hell of a show! He’s energy, singing abilities, guitar solos turned us into screaming fangirls and we’re not complaining. Shout-out to Rufus who JUICE also interviewed for opening up the show. Before the actual event though, we got to sit down with Omar and ask some questions we had in mind. (Side note: He’s actually very tall and he looks like a young John Mayer.)

‪You started writing songs in your attic and now you’ve grown into this big superstar in just two years, how it like adjusting your lifestyle to what it is now? ‬
I thought it wasn’t going to affect me but it does in a lot of ways. A lot of good ways and a lot of bad ones too, but mostly good. I can take care of my family and that is what’s important.

‪When was the point in your career where you realised that “you made it”?
It still doesn’t feel like that many people know me, you know? Cause I usually stay at home *laughs* and no one at home is going to be like, “OMAR!” but when I go on tour – I definitely remember that woah… it’s crazy. So, probably at the end of 2018, I started to feel like that. I had this really big show in Chicago which is like the most I have done in that time. Yeah, December 2018.

Your last album was Friends – in April 2019, can we expect another album in 2020 or are you gonna take it slow? ‬
I wanted to take it slow but part of me is like.. I don’t know. It’s tricky ’cause you think you got time but you don’t really have time.

Yeah, you don’t want to force it…
Yeah, but everything has been pretty good. I do want to finish the album this year. I’m pretty far in but the theme is.. I guess, “it feels pretty good”? *laughs*

‪We saw you working with Kenny Beats for The Cave on Youtube. Obviously, we saw everything that happened on camera, but how was it really like working with him behind the scenes?
It’s just like that, we’re just making fun of each other the whole time.

And flirting?
Yeah, and flirting *laughs*. I’m not joking, it really is like that. Sometimes, it’s worst because we spent seven days together, made music and he was exactly like that, the WHOLE time. There were really long talks too, where we talk for hours about things, life and what’s going on, you know?

Some bro-bro stuff going on huh?
Definitely, he’s like the big bro. I call him all the time.

‪On the topic of a Kenny, we saw a tweet of yours stating that you spilled some White Claw on his laptop and he said he wanted to beat you up, LMOA. Did you ACTUALLy spilled it?
Basically, during the seven days, maybe the second to last day – I got really drunk at the studio. We both got drunk and then I was being funny while drinking and was acting like I was going to spill it. He was like “Stop, stop!”. So, I stopped playing around and was like, “Ok, I’m done”. Then, I accidentally spilled on it ’cause I was walking over the laptop. The laptop is fine, I almost ruined his life *laughs*

Speaking of beverages, can you name one of your favourite alcoholic drinks and a non-alcoholic drinks?
In Japan, it’s lemon sours. In the United States, it’s Moscow Mule. I used to drink whisky neat because of my dad but then I realised it was gross. I like drinking wine too. For non-alcoholic… I drink a lot of plain water now and coconut water.

‪Pretty confident this is your first South-East Asia tour, but have you been to Asia before this? If so, are there any countries you’re interested to check out? ‬
Yeah, this is my first time. Actually, Malaysia looks really nice but I definitely want to take my family to Japan. Especially my brothers and my sister too, but she has a lot of kids now. So I don’t know..

You can bring the whole family?
Yeah, I can bring everyone but she has like seven kids *laughs*. We could all just fit in one plane.

You have a big fan-base here, how do you feel about that and is there anything you would like to say to fans in Malaysia?‬
It makes me feel super comfortable being here. Usually, when I travel, I feel kind of like “Ahh! I don’t know anything” but knowing that “the kids” know about me – it’s super cool. It’s a good feeling and it makes me feel appreciated. Even like the kids that were here before this, doing the interview, I could tell they were excited and it’s dope.