Don’t be surprised when this upcoming month of March, you’ll see various events organised by groups and individuals to raise human rights issues among women and marginalised groups in our country. Another year for the rakyat to advocate legislation and policies regarding human rights and tolerance. The star of the show, of course, #WomensMarchMY is a part of this tradition.

From only around 50 participants when they first started, the movement grew 10 times bigger in 2019 and it has been an interesting ride. Last year, Malaysia’s Women’s March faced backlash by the media for solely being a “perhimpunan haram LGBT”, while totally ignoring conversation over the five demands that was written on a large banner and repeatedly emphasised in the chants.

Hundreds of people including NGOs and members of the public took to the streets of KL to mark International Women’s Day. #WomensMarchMY pic.twitter.com/uL3Uqoy5mC

It also became a hot topic as the organizers allegedly were not given a permit by the police for the rally. Turns out, the organizers provided the police with notice 10 days in advance – received no objections,  and maintained open lines of communication with the police during the whole event. Hmm.. weird.

Another thing to note is that the Peaceful Assembly Act 2012 stipulates that organizers need to notify police 10 days before a march or assembly is held, but makes no mention of permit.

This just proves that we still have a lot of fighting to do! Although the feminist movement is actively vocal online, it’s important to meet and engage offline – and the rally is perfect for that. So get your placard ready and save the date: Here are the seven demands for #WomensMarchMY 2020: 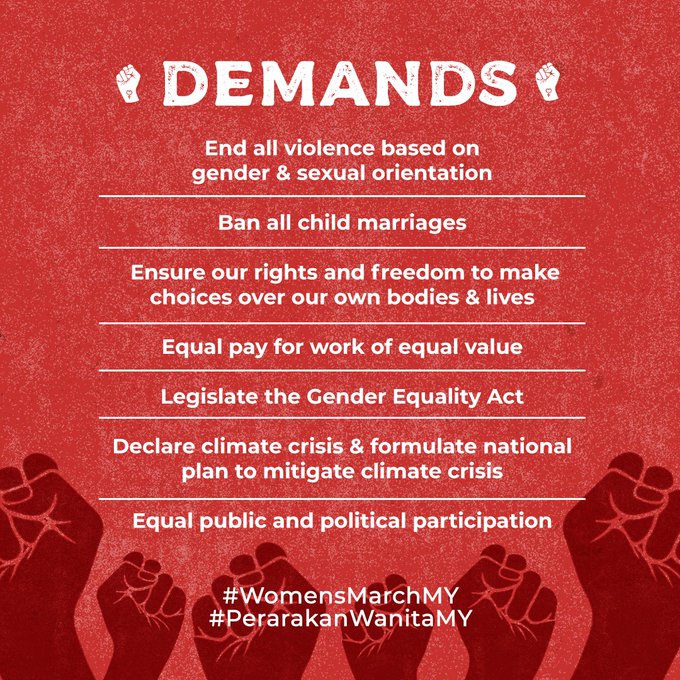 Now, before you say that the rally will be “hijacked” by the LGBT community once again – a reminder that last year and THIS year’s very first demand is to end all violence based on gender and sexual orientation. We all can co-exist in the same platform because like it or not – human rights are inclusive to everyone no matter gender, race, sexual orientation or religion.

So if you want to fight for the voiceless women in our community, the child brides, the Orang Asli, the minimum-wage workers, poverty, climate change, the constant struggle of patriarchy and straight-up equality, this one is for you. Solidarity forever.

Once and for all…

This Boot Camp is for the Youth Who Want to Start a Revolution.. Here’s How You Can Join