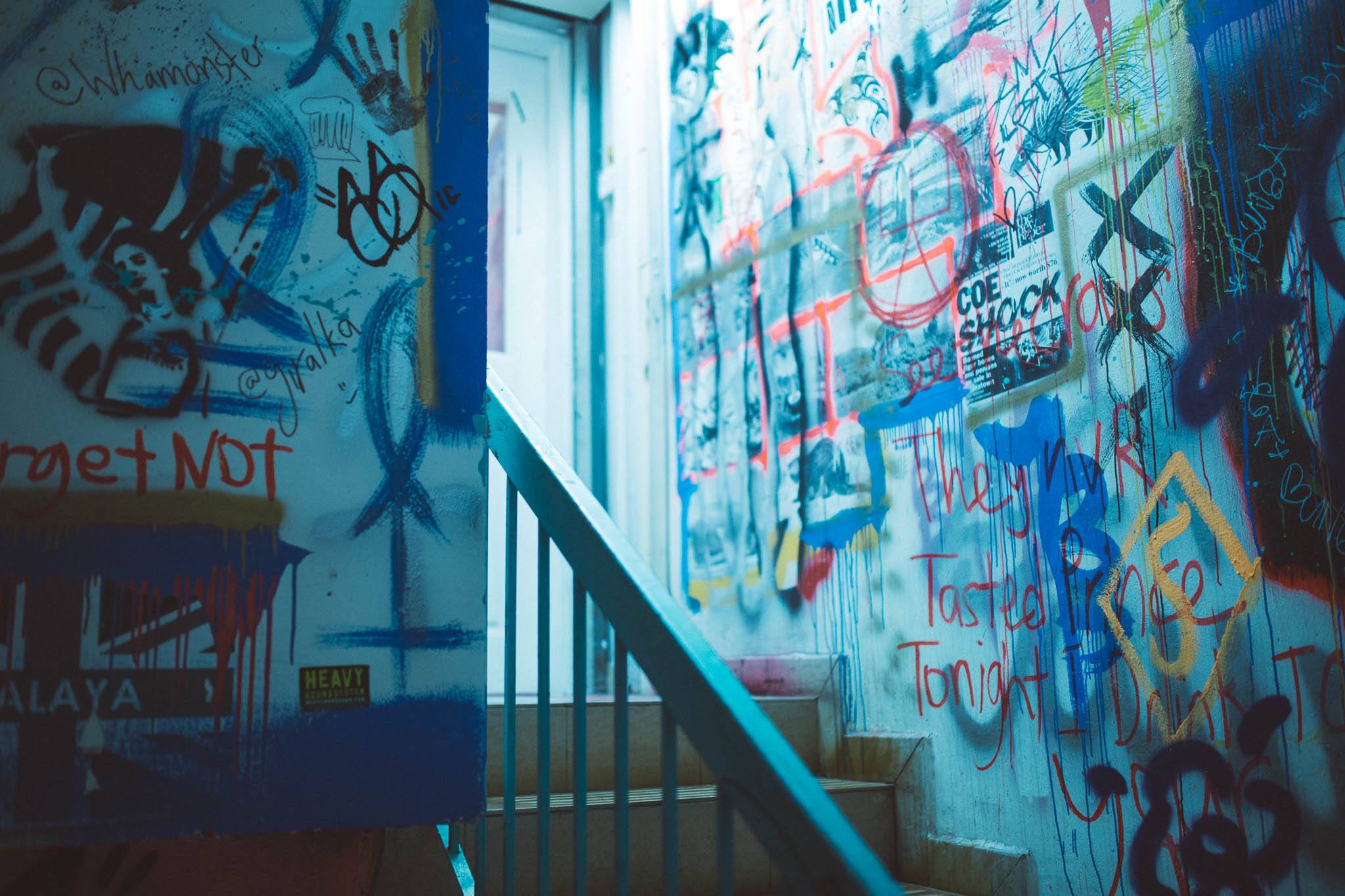 Almost everyone who has heard of Minut Init has their own perspective and often after they visit the place, they have another completely different idea of what it is. But regardless of how well you think you know the place. Whether you’ve been there a few times or a regular patron for the last few years. There is no one who knows Minut Init better than I do.

Except for the founders: Dali and James, natürlich. And of course, Mils Gan – who is currently engaged to Minut Init on Facebook and was there at the inception of the idea that would change the world.

Back in early 2011, Uptown Damansara was still dodgy looking and was not ‘arsty’ at all (arguably still not). It wasn’t a Black Mirror reality as it is today, smart phones was still a luxury and social media wasn’t as ingrained in our daily life. The idea of a privately own and artists-run creative space were fleeting dreams of the youngsters with only a few secret hideouts available.

Sh*t, this is a gallery? I haven’t seen anything like this before. This real Art. This is the voice of my generation. I found Nirvana! That was my first reaction when I entered Minut Init. I remembered it like it was yesterday. My life will never ever be the same again after that day. Here is a place that speaks the truth. No more can I enjoy the brain dead media that being shoved down my young generation’s throat after knowing that these revolutionary artworks are available for me.

Everything on display in the gallery was a feast for my eyes, my heart, my soul and my mind. From the abstract paintings to the gruesome metallic sculptures to the tiny TV that illuminates in the messy room. Everything was beautiful. It was chaotic but it was a Beautiful Chaos. The true embodiment of the rebellious youth. And the air in the studio was so fresh, potent and sweet that ease my mind to dance about with the immense beauty surrounding me. For almost an hour or so, I was in constant motion to ensure that every tiny details of the gallery are fully discovered by my wandering eyes.

That was the day I became Dali’s personal assistant, The first Robin to Batman. That was day I became an apprentice for The Black Palate. That was the day I became a Padawan of Minut Init. Every day since then was a journey. Every moment and every single minute with him was filled with words of inspirations and dreams. He told me everything that he had envisioned for Minut Init. He told me exactly what he expects from me. For awhile, I had a real older brother who I respect and look up to.

Han Solo had his Millennium Falcon,  Jack Sparrow had his Black Pearl, – Dali has Minut Init.

So when he unexpectedly decided to head out to Melbourne to pursuit his Master in Fine Arts for a few years, – I was honestly pretty afraid of being left alone with James Ly. The Chinese Viking. The Mongolian Thor. He is a legend in his own right. His management is one of the better and simpler days. James is the guru who sharpen my mentality and intellectual durability that shall withstand any obstacles that come with opportunity. Shout out to the previous patrons (Mary-am, Hazi-Man, Yo-Han) and the rest of The Jedi Council of Minut Init too – especially Big Man, KT.

I got free education from these boys in return for my service as the humble ‘voluntary slave’ of Minut Init.

The Journey to The West

From a Christmas party at Miss Malaysia’s house to stenciling the legendary ‘signage’ on the pink doorways, to joining a caravan of hippies, to opening a small booth for “Art for Grabs” and a trial shop at Publika, to countless studio visits and art projects to Dali’s return to renovating and revamping the venue with a neon touch and the opening of our second floor, to making that place my home and having travelling creatives from all around the world as my roommates, to finding and adopting a stray white rabbit from the streets, to my Ahsoka (intern) blasting Kanye West on the sound system every morning to wake my ass up, to the sermons of the African Christian Church below us that is loud enough to chase away the devils in me, to visiting nature parks with the travellers, to having a Fast & Furious kinda family of nut jobs, to sparring practices with our own Black Panther in the evening, to a last minute (init) art installation in a bank vault, to creative projects at carnivals all around Malaysia, to doing a Drink & Draw event next to original Andy Warhol’s Polaroid collections…

And of course the countless exhibitions exploring all themes from Time & Space to Gender Identity, music gigs in every genre, experimental audio looping festival, open mics, poetry readings, live drawings, art classes and continuous parties. All of it has been a crazy learning experience.

Founded with the intention of diversifying the artistic climate of Malaysia by becoming a melting pot of creative expression without censorship or discrimination. Minut Init has become a pocket universe where the possibilities are endless and unpredictability a basis of everyday life. We were dedicated to redefining perceptions towards contemporary art and encouraging discussion of aesthetic and politics. And in my view, we were successful.

But I am biased. I am certain there is plenty of criticism and negative perception on Minut Init.  Trust me, I’ve heard a few of it and yeah, guilty to a few myself. We have made a lot of friends and allies in the last 7 years but – also enemies.

So then, what happened? Why did the ultimate emblem of the underground scene die off?

There and back again…

There are a few factors that contributed to the closing of the establishment. Maybe it’s the fact that we started off with a very low budget due to being an independent space, it would have been best to have extra cash to sustain us for the slow weeks. Maybe it’s the fact that James Ly is now married with a son to care for and Dali has other business ventures to worry about and I was away in Berlin to chase my love and passion for the Arts. (Nah, I’m proud of Rivers’ tenure). Maybe it was the fact that we were too noisy and too outspoken in a time when it was best to keep quiet. Maybe we’re too transparent about our dirty deeds and should have been more paranoid about the authorities. Maybe it’s our reputation finally getting the best of us. Maybe we’ve pissed off too many people and was too rebellious.

But Minut Init is not just a party place, or a music venue, or just another art gallery. We’re an experiment. We’re a platform of ideas. We are an Art Social.

We were Andy Warhol’s The Factory re-imagined.

The main problem was that starting late 2015, everything seems to fallback to just one person. One key person. While the big boys were busy with their own lives and giving directions from afar – there was only one permanent staff. Most of the people who work in Minut Init are either Workawayers or supporting help from the Fam.

The Lord Commander of Minut Init.

It was all up to me.

I who was once a ‘slave’ now a ‘slave leader’ had to manage the place, execute the ideas to my best abilities and lead the team of travelers in order to generate revenues to eat, maintain and sustain the place – and if possible upgrade the facilities. Sometimes the events do feel like a half-ass effort but I ain’t got no higher education or rich parents. I know nothing. This ain’t my justification, it’s my G.O.M.D.

I’ve known Rivers. It was such a relief when James Rivers decided to take over my role. (Arguably his time was the wildest but he did a great job) I was able to focus on the things I needed to do for Berlin. Even if I didn’t complete everything I wanted to do there but at least I survived. And when I returned, Acap was initially supposed to run the place with me. It was supposed to be a team effort. In fact there was already a rough team but I wasn’t ready to take back my position. How can I command a team against an oncoming swarm when I was just resurrected from the dead after having an arrow through my heart then return to take a few knives to the stomach. My focus was my own personal castle. The bastard that was promised. I had to leave. I am needed elsewhere and I wanted to evolve.

This Robin wanted to fly and be Nightwing.

The Wall did crumble down after Jon Snow left Castle Black.

I believe there could be a Minut Init without me being there. It used to be able to. I believe it could have survived without me. And it did, for awhile.

But then this dumb-ass (me) had to get surrounded by an army of animated corpses which resulted in the White Walkers capturing one of our dragons and destroying the very wall I help protected. (If you know the truth, then this analogy is not too far off).

The revolution doesn’t start with a single person. It’s starts with everyone. Go on then, help the new rebel leader, Acap in the final days of Minut Init.

Remember that Minut Init is not a place. It is not a venue. It is not just a home. It was a Time Machine. It is Space. It’s Social. It is an Ideology. It’s a Philosophy. It’s a Cult. It’s a Movement. It’s Art.

Minut Init Art Social/Space/Galleria – the headquarter, the Castle Black, my TARDIS, the Rebel Base – is closing for now (kinda) but as long as you continue making Art, keep fighting for the truth and ensure that the voice of the youth is heard. Minut Init will live on. It will live on in all of us. I pass you the torch now. To every single one of you who love Minut Init. Keep true to the manifesto. Things will never be the same but keep your heads up and gaze into the stars.

One day, it shall return.

Be Art. Be Minut Init.

Minut Init & Chill: The Hitchhiker’s Guide to The Galaxy

No longer an underground art gallery, but a space where all forms of art and people are embraced.

Punk rock art gallery in the heart of suburbia