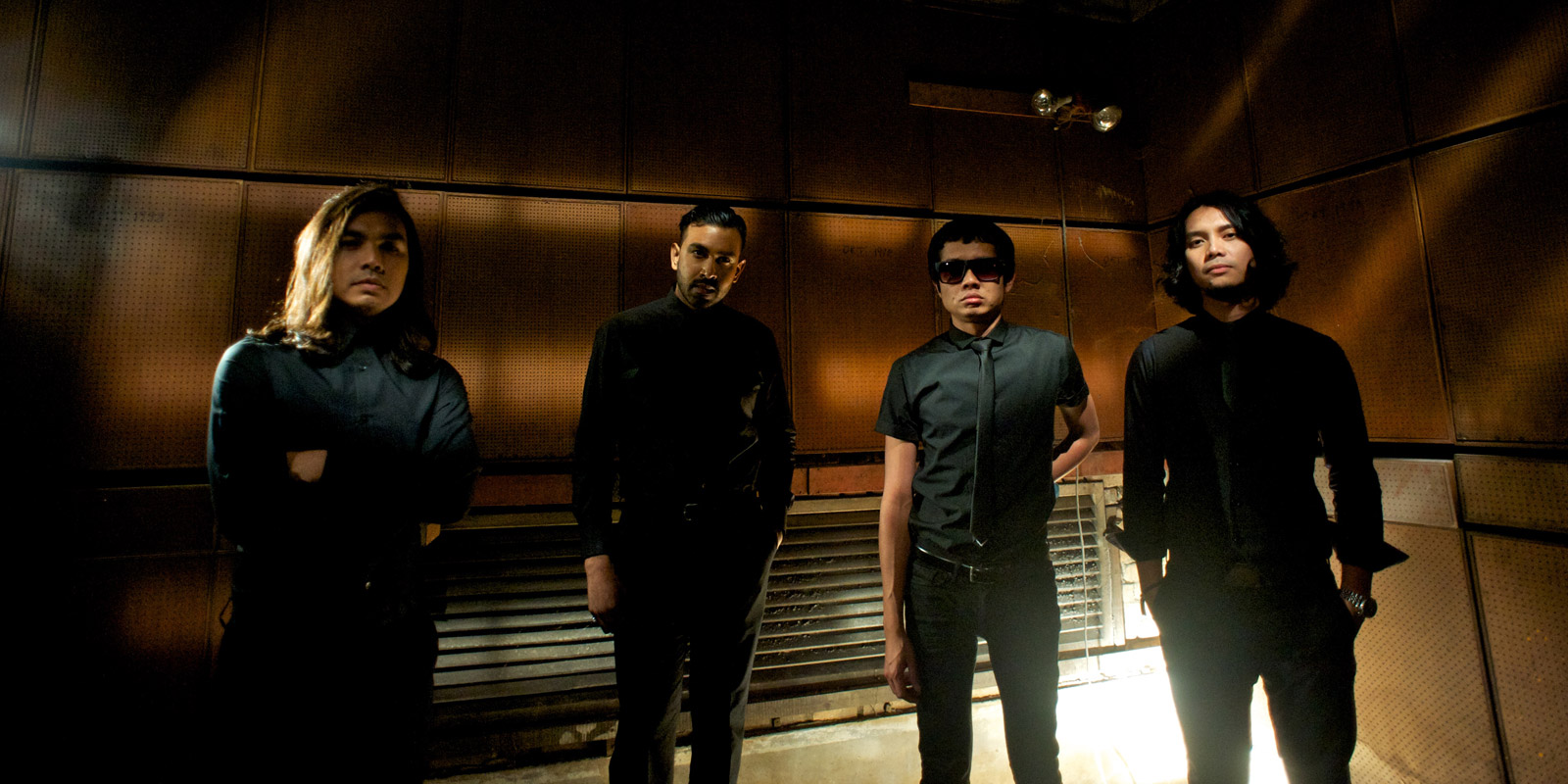 To local music listeners, we’d recognise the face of Edwin Raj as the man who fronted beloved rock band They Will Kill Us All, and to fans who are even more discerning, Irfan Iskandar is known as the noted drummer who has played in The Times and currently plays in Britpop band Bittersweet. However, they only make up half of their new band TOKO KILAT — the Malaysian half, specifically. Singaporeans Redzuan ‘Wan’ Hussin (bassist) and Khairil Shah (lead guitarist), both of whom play in indie band Moods, complete the lineup.

The meeting of the band members was a natural one, as Edwin explains, “In interviews, people ask, ‘So, how did you guys come together?’ I’m thinking of a story, but I have no story to tell.” He, Irfan, and Wan are long-time friends who started jamming away would-be music for this new band when Wan brought in Khai who seamlessly jelled into the established friendship of the three men. Though their band chemistry is a synergy of mutual understanding and aim, it does take a certain commitment, which is evidenced in Wan and Khai’s weekly crossing of the causeway to meet Edwin and Irfan for songwriting, rehearsals, and recordings on Friday nights, which will see them leaving by Saturday afternoon, only to repeat the process again the week after.

This practice has a tendency to sound taxing, especially if one took into consideration that all of them are working class men who are also married with children. But Wan and Khai both carry a relaxed disposition and they are compelled to follow through with TOKO KILAT without the need for persuasion or coercion. “I wish I could say that there was a dangling carrot, but there wasn’t — it’s just something that I want to do,” states Wan before he continues, “I mean, we’ve already passed our foolish rock star dreams. We’re not in it for the fame, money, or chicks… maybe later on. But now, we wanna focus on finishing the job.” The dedication that the four members have is unquestionable. Their maturity – in terms of age and the length of their respective careers – has given them the unwavering drive and focus to make music that they would be proud of and capture the organic energy they have as quickly as they can.

“A lot of people like us, but
they’ve not heard of our music.”

Inevitably, the coming together of musicians of their stature has caused people to talk – a lot of questions and expectations have been set for TOKO KILAT even though the band has yet to release anything, to which Irfan concurs, “A lot of people like us, but they’ve not heard of our music.” Though Edwin is confident about their ability to affirm all positive preconceived notions, he and his bandmates remain humble. “[For] every band that starts [afresh], it needs mileage. We need to go through the tiers – we need to jam, we need to write,” Edwin offers while Irfan adds, “It’s like starting all over again, but this time, everyone knows what to do. So, in the studio, everything went quite fast, actually, because of the experiences we have. But the thing is, we’re starting anew. We don’t expect to go out as big as… no.” He stops himself short of making a comparison, perhaps not wanting to fall into the cliché of band comparisons. There was also a consensus among the men that fans would compare the music of TOKO KILAT with the past works of their respective bands, but as one can imagine, the men are wise to know that they can’t please anyone but themselves. “Everyone is curious on how we’d sound like, for once in this band, I don’t feel like explaining, I don’t feel like justifying ourselves – I’m just enjoying the ride,” says Wan.

One defining statement that they’d like to make is a simple one, as Edwin illustrates, “This time, we wanted to write songs and produce music with just four guys and four instruments – two guitars, a bass, and drums. No keyboard, no synthesisers, no orchestra. We wanna try for this first record, what it would sound like with just four guys.” And their objective, however, is much more of an undertaking as they want to achieve writing music that can be considered timeless classics, but still relevant to the times – an ambition that all musicians share and strive for.

For now, TOKO KILAT is excited to share their music with everyone. Their songs are predominantly in Malay, though there are two English songs in their current repertoire too. Edwin is eager to share that their singles will be mastered in Abbey Road Studios, London. The band’s engineer, Keith Yong – also known as DJ Slutski (alternatively, to our amusement, Edwin refers to it as Keith’s Jewish whore name) – sent everything off to prolific mastering engineer Frank Arkwright, who remastered the entire catalogue of Joy Division, The Smiths, Blur, and the illustrious list goes on. Though the finished results haven’t been returned, Edwin is rightfully optimistic that “99%, it will be fucking awesome.”

“I wanna debunk, diminish… shut
[naysayers] up, in a nice way (laughs).”

And if one still has questions on the conception of TOKO KILAT, Edwin has this to say, “We’ve prolonged this journey and ambition of music. I’ve always joked that we’ve invested so much in gears, just because one or two bands broke up, don’t tell me you wanna give up? And it’s so hard to find a bunch of guys who want to make music at this age and time – and that alone is a syiok sendiri trip.” Though his declaration ended on a jokey note, it is clear that the men are not flippant about their music. Their formal debut in the form of a music video for lead single ‘Pemacu Api’ — which is a complete audiovisual presentation of TOKO KILAT — will assuage all curious minds (and ears) of those intrigued by this new rock band. Or as Edwin simply announces, “I wanna debunk, diminish… shut them up, in a nice way (laughs).”

The music video for ‘Pemacu Api’, directed by Shimy Latif, will be out soon.

The band is slated to play on the first day of Good Vibes Festival ’16 on Friday 12 August ’16.