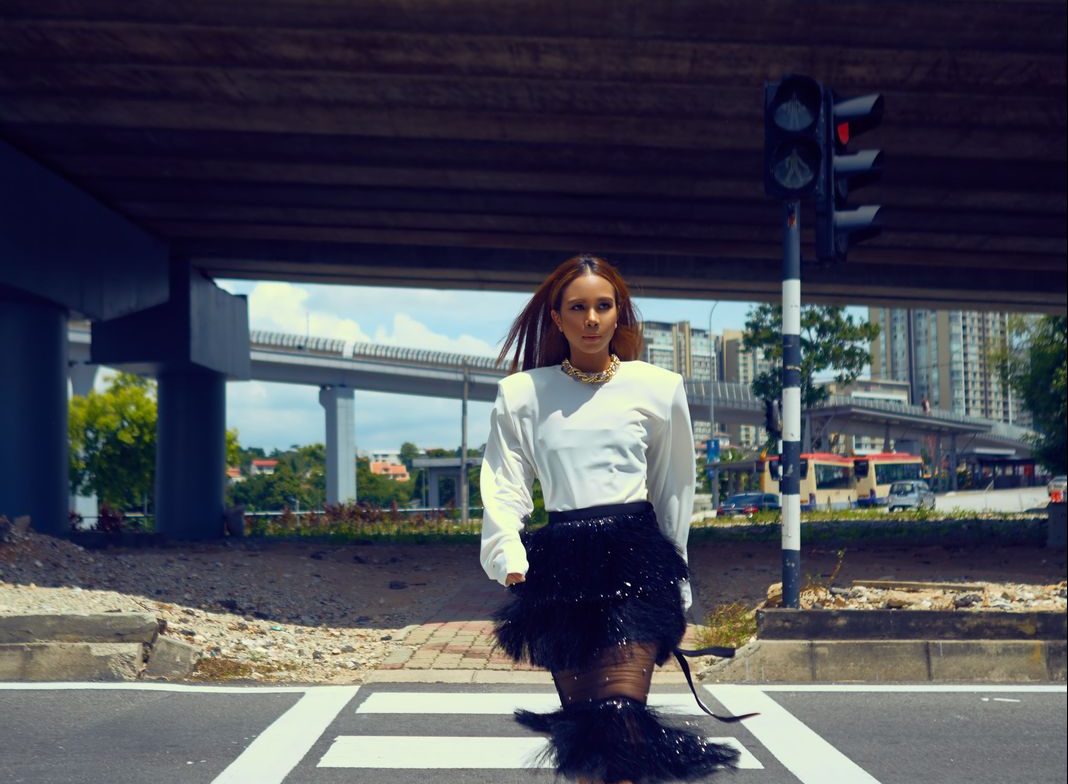 Her album is finally here! No stranger to the local hip hop community, Kayda just released her debut LP Love For No Reason last week and boy are we hooked!

Crafted with raw emotions, the 6-track hip hop/R&B album explores Kayda’s personal and arduous journey from heartbreak to hope. She shows off her hard-hitting rap style and wavy singing as the album gives us a peek into her personal life and insights. It definitely invites listeners into a deeper conversation about our reasons to love.

Love For No Reason contains six tracks — ‘Can’t Go Back To You’, ‘Views, Pull Up And Swerve’, ‘Sugar’, ‘Call On Me’ (feat. Sheila Majid), and ‘Sugar (remix)’. While ‘Call On Me’ has a mixture of both Malay and English lyrics, the other five numbers are in English.

JUICE got invited to her album launch party that was held at The Bee, Publika last week. Before the event started, we had a little chat with the rising artiste about Love For No Reason, being an OG/Kak Long and more…

Why did you choose the name Love For No Reason as your title for your first solo album?

Kayda The story behind the title is that people would always ask me questions that sometimes I can’t even answer. For example, when people ask me “Kayda, why do you love to write this kind of songs? Why do you love hip-hop? Why do you love to rap?” Sometimes, I just don’t know how to respond to that, I just… love to. And I want to convey the message that you don’t need to explain yourself as to why you love something, you know? That’s why I named it Love For No Reason. Also at the time I was creating this album, I didn’t really want to think too deep about what others thought about me and how I should be. Because before this, I was like that and that alone definitely held me back. In this album, I get to be fearless. I could take the risk and release the things that I want. Freedom.

What can fans and new listeners expect from this album?

Kayda Definitely a different side of me. A little more deep and something more real. I wrote a song about being really heart-broken, that took me a few hours to just let all my emotions out. Also, a lot more vulgarity because I was feeling really angry this past year. Basically, expect me to be straight up honest about what I am feeling and not be afraid of what people think.

You have six tracks on ‘Love For No Reason’. Out of all of them, which track holds a special place in your heart and why?

Kayda I would say ‘Call On Me’ cause my mother – Sheila Majid, is featured on it. In the process of writing the lyrics, somehow I just felt like singing along to my mother’s song called ‘Dia’. I called my mum, and asked her to try to sing over the beat. When she did, I asked her if we could record it and she was just like “yeah, okay”. At the beginning, I didn’t take it seriously cause I thought that she’d forget about it or she’d over-think about how it should go. But two weeks after that, she asked me when we were going to record the song and I was like “Yes!” Also, I feel like a lot more people could relate to it.

You have been in the hip hop scene for quite some time now, why did it take you this long to release the album. How long did you take to complete it?

Kayda Like I said before, I was thinking too much about what others thought and that held me back. That’s why it took me 5 to 6 years to finally get to this point. Previously people kept comparing and telling me to be this or that. But deep down, I knew exactly what I wanted but I just didn’t have the resources. It took me a year plus to complete this album. I also took the time to gather and find the right people to work and help me along the way. I had to carefully choose what song is suitable to be in it and make the tracks more uniformed. Now, finally I have Love For No Reason.

The hip hop scene is Malaysia is slowly thriving with more representation in mainstream media, ease of distribution with the internet and many talented newcomers. Since you are an OG/Kak Long, what do you think of the scene now as compared to before?

Kayda Haha, self-proclaimed okay… Oh my god, so much difference… I can really see now how much the scene has improved as compared to when Raising The Bar just started. The younger generation, WOW. They really support the scene, man. I’ve seen hip hop gigs here where the crowd/fans/friends would know all the lyrics to the songs. When it comes to the newcomers, their talent is also the same as the people out there internationally. It’s just that they are underrated. I feel like if we give them the right people to work with and enough resources, man… our scene would level up definitely.

I’m proud to say that I came from the hip hop scene. These young kids are really creative too, they make their own beats, write their own songs. They’re not afraid to do what the people in the US are doing. There are also many female rappers now that aren’t properly discovered. I was surprise like banyak gila! The mass media has this perception that our scene is still dominated by men. But no, hip hop is doing good and there are so many female rappers actually.

Take a listen to Love For No Reason below:

Love For No Reason is available on all streaming platforms.

LISTEN: Groove to NYK’s New Single ‘Make It On Me’ Featuring Airliftz

All this love you tryna make, just make it on me.

LISTEN: R’n’b Songstress Nadhira Says ‘Hold Me Down’ In a New Single