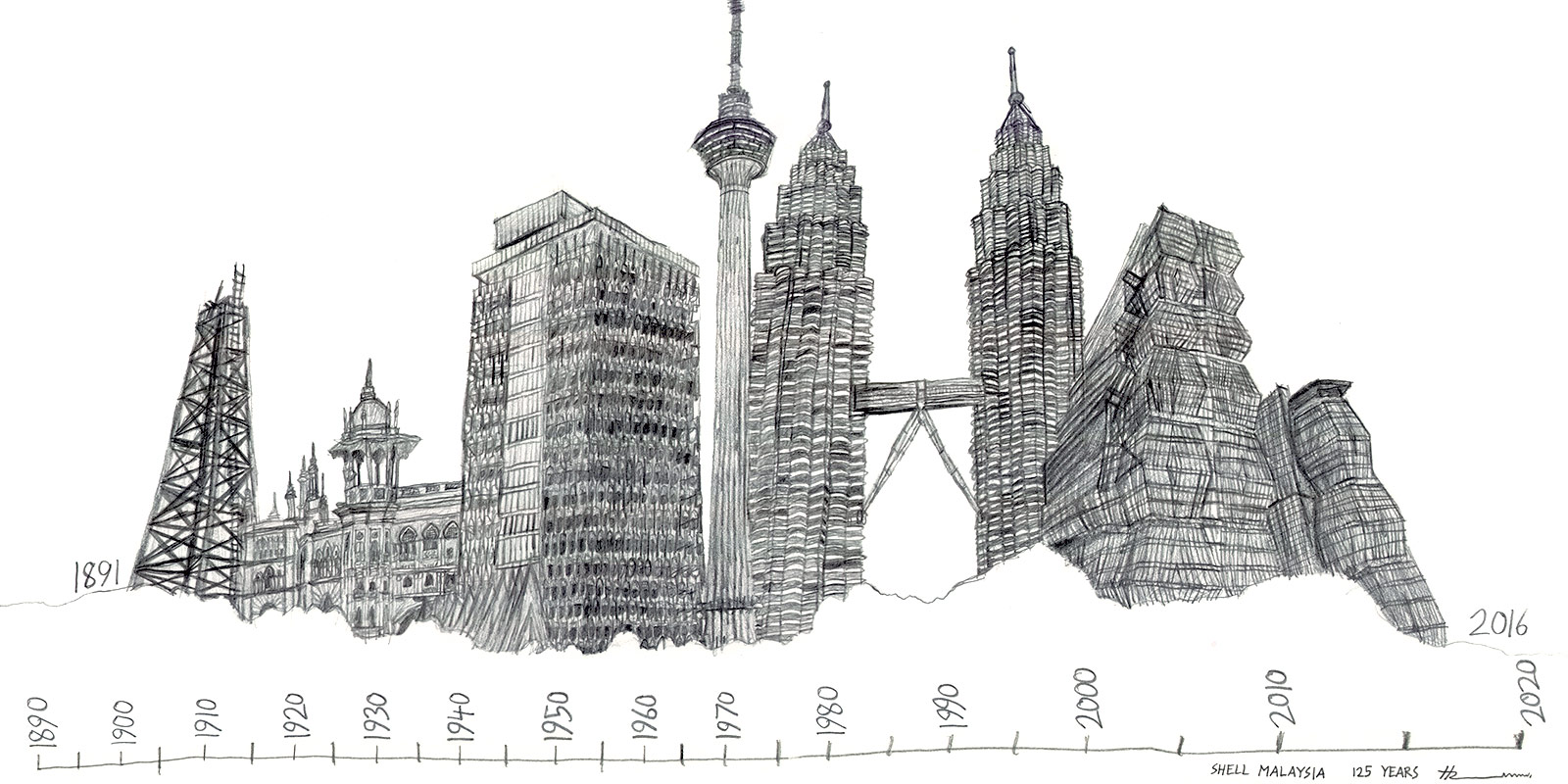 Perfection and accuracy is the way of 18-year-old Yap Hanzhen, who sketches in tremendous monochromatic detail of subjects that range from architectural marvels to local flora and fauna. The talented wunderkind’s autism was the point where his encouraging and supportive parents used sketching as a method to communicate with their taciturn son. Hanzhen has a photographic and industrious approach to his sketching with his parents stating, “It probably explains how he could draw with such speed, consistency, and quantity. He has drawn a total of 476 sketches in five years!” Along with the helpful elaboration from his parents, JUICE learns more about the young artist’s beginnings, his impressive work ethic, and utilising his autism as an asset.

When was the first instance you realised that you had a knack for sketching?
Hanzhen I began drawing on sketchbook in 2009, then on art paper in 2011.
Parents We noticed that Hanzhen is a visual person. Verbal communication was difficult and he didn’t have speech until about 3 1/2 years old. Even after that, the articulation and expression were blurred. Thus we communicate with Hanzhen through part sketch, particularly on things that he does not know.

It started with us sketching objects around the house with him and naming them so that we know for sure the image of the object and the name will be etched in his memory. They were only meant to be thumbnail sketches, each done in less than a minute. The sketches were very fast and started to look nicer with Hanzhen insisting to draw details and shadows. The vocabulary training session became a routine where Hanzhen sketches about five objects in a night. In the learning process, he has gained a vast vocabulary.

He always included a routine of the sketching wherever he goes, including holidays and vacations. We decided to give him a sketchbook to record all the things that he has sketched. Soon Hanzhen ran out of thing to draw. He had drawn all our handphones, credit cards, keys, trays, baskets, beds, pillows, doors, bags, watches, furniture. Even his father’s foot! And the list goes on.

We wanted to increase his vocabulary, so we looked for books for him to sketch so that he could increase his general knowledge. He ended up reading about each of the subjects, very robotic-like, all about a certain subject at a time, like a little pictorial dictionary. At one time we wanted to teach him different species of dogs in a park and ended up with him drawing a full range of dog species!
We noticed his liking for sketching things of the same type, like different types of butterflies. That is when we asked him to draw his collections in a bigger format for them to be framed up for exhibition in April ‘11.

In an interview, you said you spent six hours doing schoolwork and spend another six on improving on your sketches. Was this discipline set upon by yourself?
H Yes, by myself. I want to be better.
P Very typical of Hanzhen – he goes to details in giving equal treatment to everything. Without any notion of cheating, he gives to his brother half of everything he has, dividing equally the food and clothing, etc. He even bought two smartphones (one for himself and one for his brother) when he first received a big proceed from one of his exhibitions. That also goes for our pledge to contribute 20% of all proceeds to charity. He will remind us of that too! His six hours of sketching include some of the other chores in between (e.g. scanning and uploading his sketches to the website), with some quick video games slotted in too!

You clearly work hard on your sketches. Being autistic; do you think this is your way of expressing yourself?
H I think about the many details. I think about my series and my collections.
P Hanzhen has been told he’s autistic but he is not able to grasp why he is different and how autism has affected him. However, even before he was told, he appeared to be conscious of being different. Often, when in public or during functions, we see him looking at his brother for cues on how to act. He takes our directions very seriously in public areas, knowing not to confuse others who do not know his condition. However, he lets his hair down in the company of people that he knows! Completing a series of drawings seems to give him much pleasure and satisfaction… complete with the numbering list of the whole range of drawings (which he keeps a very detailed record) and exact dates clearly indicated on his drawings.

We understand your parents are architects. Did being surrounded by their architectural sketches have an influence in your own sketches, which comprises of a lot of buildings?
H Yes, Pa and Ma helped me to choose the building to draw.
P We know the subjects that he will excel in sketching, thus we would channel his energy towards them. If we had already prepared a collection of subjects, then he would choose the ones that he prefers to draw first. For example, he had chosen to draw the Sydney Opera House, the Town Hall, and the Harbour Bridge as his first subjects from our last Sydney trip. He enjoys sketching in a series that has a finite collection, almost mathematical in deciding.

Your photographic memory can last for quite some time. Do you only rely on what you remember or do you still reference from photographs when you sketch?
H I draw from the photographs.
P Hanzhen refers to a photograph or to a real-life object when he sketches. We believe he sees the image as a whole, like a camera taking in a shot. That probably explains how he could draw with such speed, consistency and quantity. He has drawn a total of 476 sketches in five years!

How did you come to develop the skill to be so detailed? Is this because you want to capture whatever you saw as accurately as possible?
H I draw everything I see.
P He has an excellent attention to detail, seeing things in his own way. From the way he draws, he appears not to have a preconceived idea how the object would appear in the end. He sees the things that we do not see. He sees the half shadows of objects that he sketches. It is because he does not preconceive things that he draws. He draws what he sees.

We’re sure you must be meeting a lot of new people, has all the attention you received for your sketches been easy for you?
H It’s ok, I like it.
P Hanzhen’s type of skills will always spark a light of hope in the autistic community. Interestingly, it is a hope that is built upon autistic behavioural traits. Somehow the table has turned around… in Hanzhen’s case, autism is now an asset; a cause for jubilation rather than just acceptance. I quote Mr. Herman Adhiyatma, past president of Kiwanis Club of Singapore (Delta Chapter), who wrote in his email on 18 February ‘14: “I also alluded to the fact that Kiwanians are the beneficiary of Hanzhen rather than the other way round. We need to recognise that.”

Are you aware that you could possibly be an inspiration or role model to other people who have the same condition as you?
H I hope a lot of people will like my drawings.
P From the feedbacks that we get after his many exhibitions, we can confidently say yes, his work has raised awareness on autism to a certain extent. More importantly, we trust it has given hope to many parents. I quote Gil Perez of Singapore, who wrote this on Hanzhen’s guestbook during an international conference in Melaka on 23 August ‘14: “Good job, Hanzhen. I would like my daughter Amor to draw like you someday!”

Do you want to continue to be an artist when you become an adult?
H Yes, I want to be an artist. I want to go to university to learn to draw better.
P Upon completing his O-levels, Hanzhen hopes to get a placement at a reputable art college to further his art education at the tertiary level. We are still searching.

How did it feel to see your sketches available at two Shell stations – two public spaces available for all walks of life to see?
H It feels good and nice and clever.
P Even though he is not very good in expressing himself, we could see and feel his self-esteem being boosted on a daily basis. He is brimming with pride, from the praises and the fuss that is around him; from the daily constant activities that are centred around his art exhibitions and commissions.

Yap Hanzhen’s murals can be found at a Shell station at Terengganu and Kuala Lumpur. For specific locations, log on to www.shell.com.my/murals.