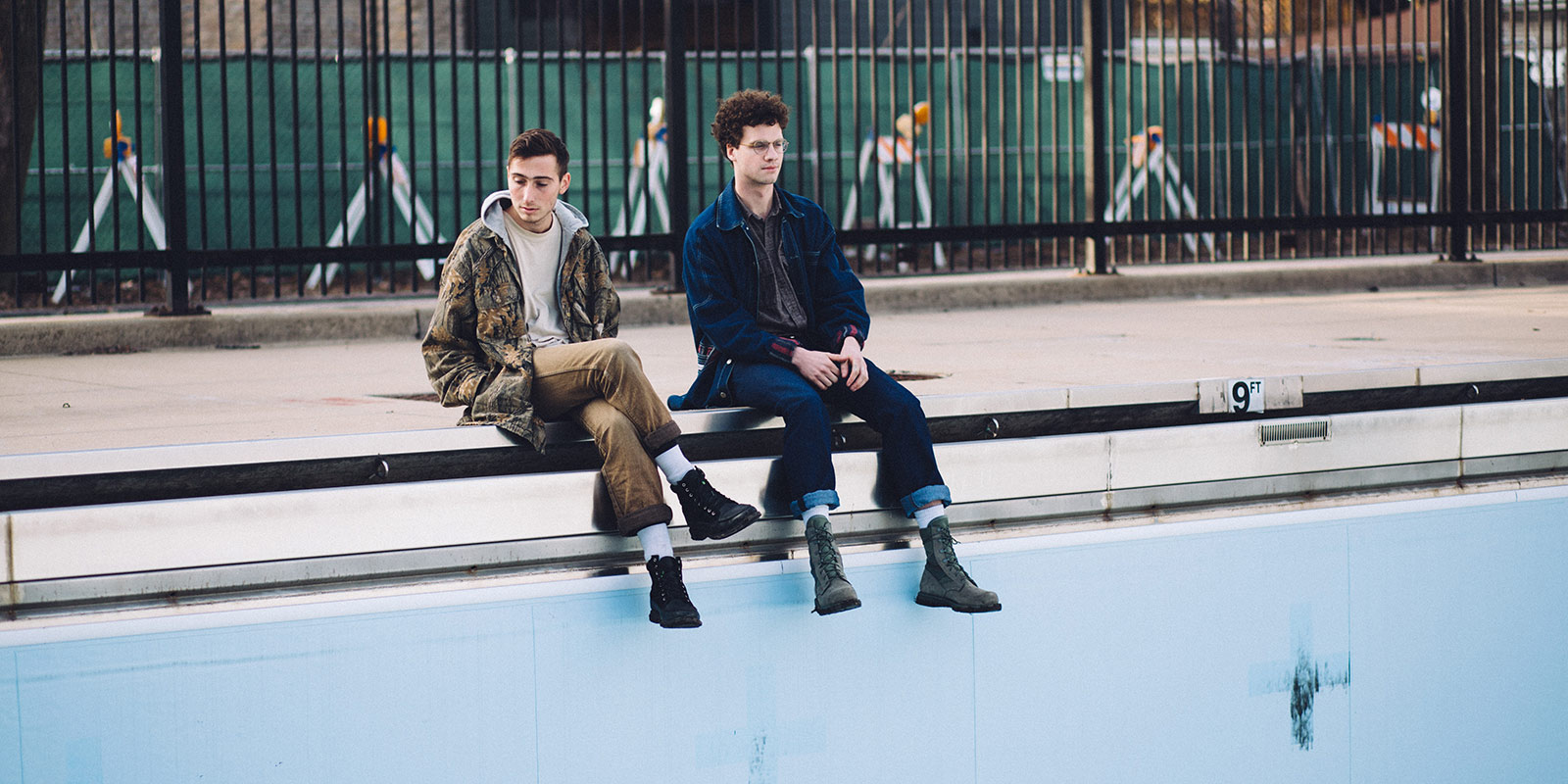 Julien Ehrlich on his learned experience with his past bands, allowing songs to pass the test of intoxication, and having full creative control over Whitney.

Chicago indie band Whitney has generated plenty of buzz with their debut album Light Upon the Lake; the band is constantly on the tongues of many, citing their wistful sound that bears lots of soul. Though they’re generally placed under the label of indie rock, country and folk follow closely behind. These descriptors still encompass a range of meaning, but they do highlight the earnest storytelling in their songs. A pervading theme on the album is the separate heartbreaks that the two core members, singing drummer Julien Ehrlich – whom we spoke over the phone with – and guitarist Max Kakacek, were enduring.

‘No Woman’, ‘On My Own’, and the oft-referenced ‘Golden Days’ include lines of a new feeling of being a solo person without a lover to hold in bed, and moving through this phase of life alone. The sepia warmth that exudes from their songs, Julien’s knowing delivery, the gentle pace, and the gravitas of the brass instruments are some of the standout components that make Whitney such an accelerated favourite. So much so that the English marvel himself Sir Elton John publicly declared his adoration for the new band via an interview in The New York Times after the band was recommended to him by The Guardian’s music writer, stating that ‘No Woman’ “was so wistful and so plaintive and no one else sounded like that.” Julien, who sounded still in disbelief of the conversation ever happening, remembers, “It was incredibly nerve-racking. I basically spent the whole day unable to talk because I was nervous that I was going to talk to Elton John.”

Julien used to drum for alt rock band Unknown Mortal Orchestra (UMO) before he eventually joined the now disbanded band Smith Westerns where he met Max. When Smith Westerns bit the dust, the two friends ventured their separate ways to work on their individual projects before returning to each other to form Whitney. A name, of which, has since devolved into many different interpretations, but the root origins was a fictional character that was conceived by the men as an aid in their songwriting. It didn’t take long for them to retire the character to allow their own voice be Whitney. Joining them, there are Will Miller (trumpet), Malcolm Brown (keys), Print Chouteau (second guitarist), Charles Glanders (sound person), and Josiah Marshall (bass) – a sprawling band of friends that only further strengthens the euphoria that is inherent in their personalities, and inevitably, their songs.

For all their affecting sincerity in writing songs that matter to them, it’s best to keep in mind that the men of Whitney are still young – getting into antics of taking photos in the nude, publicly talking about their Twitter DMs, and reportedly getting so stoned as a collective that the high induced panic attacks. Away from music, it’s delightful to know that they don’t take themselves too seriously. Before Whitney touches down on this part of the world for Laneway Festival Singapore ‘17, JUICE manages to speak to Julien about his learned experiences in UMO and Smith Westerns, letting things happen organically, getting stoned while in the songwriting process, and writing songs that brings tears to people’s eyes.

You guys are on a fast ascent to fame. Did you guys expect any of this when you were practically homeless in the countryside, writing songs?
We 100% believed in what we’re doing, but you can never expect that things are gonna pan out when it comes to art – it’s chance, you know? Our songs caught the ear of an amazing record label – Secretly Canadian. You can never know, but we definitely had like a magical feeling while we were writing. I think we have a strong creative relationship, so we believe in the music that we’re writing now.

“… we’re not the type of people to be enamoured with sad, sad bullshit.”

The album is written during a transitional period of pain and heartbreak and it was during the dead of winter. How did you manage to not allow the gloom to enter the music, even though the lyrics are sad?
We were going through a bunch of crazy, transitional heartbreak and tragedy in a way, but we’re not the type of people to be enamoured with sad, sad bullshit. We’re generally happy and positive people, I think that came out in a lot of the music, but what we went through also came out in the lyrics.

Having been in Unknown Mortal Orchestra and Smith Westerns, what have you learnt from being in these two bands?
Musically, I don’t think they influenced what we’re doing right now. I think, just a good work ethic, especially with UMO. They toured for two years straight and they worked so hard and had such a good live show – we wanted to emulate that. With Smith Westerns, it was on what not to do in terms of getting high on yourself and not on drugs – just letting any perceived success get to your head. We never want to do that with this project, we just want our heads to be on the ground and work as hard as we can.

Before coming together with Max, you guys worked on other projects before working on songs for Whitney and realising that this was the best. How did you guys come to that realisation?
After Smith Westerns broke up, we were creating this space to come together to work on a project and let it happen organically. I don’t know, I think it’d be easy for us, post-Smith Westerns, to immediately concoct some crazy plans or take over the indie world. But I don’t think that’s our vibe, I think we wanted things to happen organically, that’s why we went off and did our own separate solo projects for a little while.

“… we wanted [Whitney] to be like a time capsule of where we were in our lives rather than a weird art project.”

We know you don’t like talking about this, but you guys used to have Whitney as a character to get a different perspective on songs and to monitor levels of self-indulgence. Why was that necessary at the time?
Kind of. For the first couple of songs, they were a way for us to join forces creatively to get to know how to write with each other for a little while. But when we were writing ‘Golden Days’, we realised how the melodies and the topic of the song… we were like, “Alright, let’s stop using this fictional character idea and actually put real thoughts and emotions.” I think that was the first time we realised we’d have to live with each song forever – we knew how special it was, we wanted it to be like a time capsule of where we were in our lives rather than a weird art project.

Working with Jonathan Rado of Foxygen on the album, you mentioned that it was nice working with a producer who’s the same age. Is it because of the relatability factor?
Since Smith Westerns, we worked with Chris Coady and he’s an incredible producer, but I think for this project, we didn’t necessarily want to have a weird power imbalance. With an older producer, you sorta have to take what they say and go with it, like, “Okay, fine! That’s fine!” I think we wanted ultimate control over the record, so that’s why we chose to co-produce it with Rado, who knows the all the sounds of a studio and gets the gear that we want to use. I think ultimately, it came down to power. We were so close to the project that we didn’t want anyone to drastically change or influence it. And everything that Rado contributed was so incredible that it was perfect. Yeah, we didn’t want the project to have a facelift.

You have this tendency of describing songs with their ability to make you cry, be it when fans listen to your music or when you’re describing Frank Ocean’s Blonde to Elton John. Is that quality of emotion something you strive to create when you’re writing songs?
Oh yeah, definitely. It’s not a unique quality, but it’s definitely something we strive for though. We want people to feel something in their heart, we don’t just make vibe music. We’re not a style over substance band by any means. I think we try to write the most substantial songs, the most emotional songs that make you cry. I think when we first wrote ‘Golden Days’, “Those golden days snuck away from us,” – that was the moment where I was like, “Oh, shit.” I can pinpoint someone who’s going to cry in this song after writing that line.

“… revisiting [songs] while stoned or on whatever substance is very important, it kinda has to pass that test as well.

It’s clear that you guys have a great time generally – drinking and getting stoned. Is it true that you write songs while sober but then revisit them while drunk?
Yeah, I think there were some songs where they were written while we’re a little buzzed. But in general when we’re coming up with a concept and foundation for a song, we’re usually always sober because we take it seriously and we’re not gonna do it while we’re fucked up. But yeah, revisiting it while stoned or on whatever substance is very important, it kinda has to pass that test as well.

Whitney is one of the headlining international acts to perform at Laneway Festival Singapore ‘17 at The Meadow, Gardens By The Bay on Saturday 21 January ‘17. More information at singapore.lanewayfestival.com.