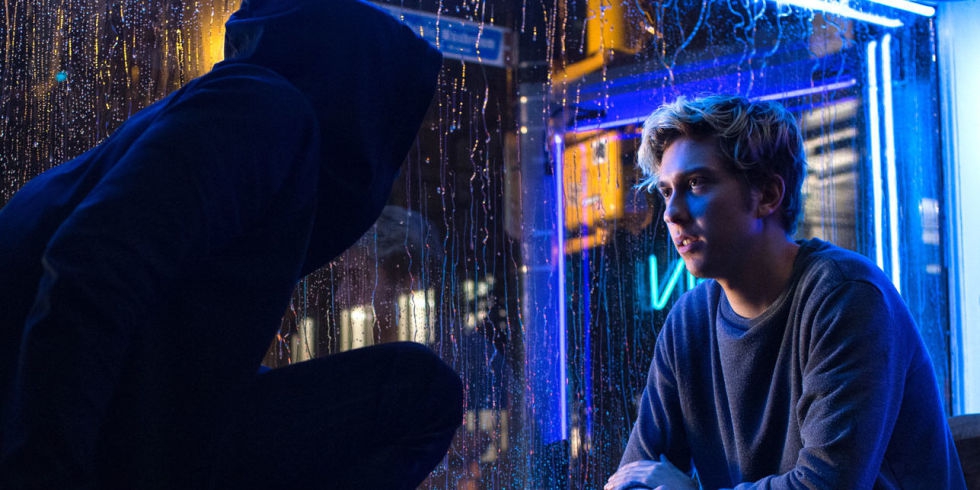 Thought America would stop making poor, whitewashed movie adaptations of brilliant foreign franchises once and for all? Think again. It turns out Hollywood didn’t learn its lesson after Ghost In The Shell tanked with critics and hit a sore point with fans all over the world. One of Netflix’s newest commissions includes a movie adaptation of the landmark anime Death Note, and the casting is – despite Netflix’s current reputation as champions for onscreen diversity – a minefield of bastardised storylines and political incorrectness.

For those of you not in the know, Death Note was initially a manga by Tsugumi Ohba and Takeshi Obata, serialised in Japan’s Weekly Shonen Jump magazine before being faithfully adapted into an animated series. It revolves around high school student Light (or Raito) Yagami, who finds a mysterious black notebook. It turns out that the unassuming piece of stationery is actually a ‘Death Note’ dropped by a shinigami (Japanese for ‘God of Death’), which brings about an untimely end for those whose names are written on its pages. Light, a charismatic ace achiever at school, secretly harbours a megalomaniacal mindset and is hell-bent on meting out his own twisted version of justice to the world’s criminals. In light of this (no pun intended), he takes control of the notebook into his own hands and embarks on a crusade of terror against the entire Japanese nation. Squaring up against him is a genius detective known only as L, who sports trademark eyebags and pale skin (from rarely sleeping or going outside), as well as an infamous sweet tooth that has made him one of the most recognisable characters in anime today.

As a fan of the original manga and anime, I desperately wanted Netflix to perform on this one. From the first announcements, it seemed that all signs pointed to go. Adam Wingard, who has directed excellent films like The Guest and last year’s Blair Witch, is slated to direct. The production team includes Roy Lee, a veteran of Asian film franchise remakes; Dan Lin, who also produced The Lego Movie; and Masi Oka, who you may remember as Hiro Nakamura from Heroes. Everything seemed to be all set for a fantastic Hollywood remake of an Asian franchise – which would also be the first of its kind, looking at the meteoric failure of previous adaptations like Dragonball: Evolution and Ghost in the Shell. But as they say, nothing lasts forever, and my initial happiness was only short-lived.

Netflix and Wingard’s creative team have taken a whole other step with their version of Death Note. Most of the characters have been given Western names, sometimes obscuring their initial characters beyond recognition. Light Yagami has become Light Turner; his pseudo love interest Misa Amane has become Mia Sutton; and his father Soichiro Yagami has inexplicably become James Turner. This may seem unwarranted, much like the unnecessary name changes in the early seasons of Game of Thrones, but there is a darker motivation afoot here. You may have guessed it already, but Western-sounding names only fit a predominantly Western cast. That’s right – Hollywood have whitewashed a movie once again, cutting Asians out of the roles they most deserve.

Most of the main parts in the new Death Note have gone to white actors. Nat Wolff (a former Spiderman hopeful who lost out to Tom Holland) plays Light Turner, who is now no longer Asian, nor a brutal cold-hearted psychopath masquerading as a brilliant student. Instead, Wolff’s portrayal of Light has bleached-blond hair and a permanent sulk, fitting the American teen drama trope for a depressed troublemaker – which is so far removed from the whole point of Light Yagami’s character. The trailer also clearly points at a romantic relationship between Light and Mia Sutton (the Westernisation of Misa Amane), who is played by Margaret Qualley. Qualley is brilliant in HBO drama The Leftovers, playing the conflicted teenage daughter of the town sheriff. She also certainly seems suited to play Misa, who has been re-imagined as a tough, smoking cheerleader. This change may seem to fit the context of the movie (and plausibility, in general), compared to Misa’s original character as an international model and pop star who becomes infatuated with Light. But no romantic relationship between her and Light ever existed in the original – to Light, Misa was only ever a means to an end, and someone to be used for his own personal gain. Trying to cater to a Western audience is bad enough if it has to be done via whitewashing, but changing such a notable relationship beyond recognition in addition to this makes everything about the new Death Note just, well, wrong.

Some fans have defended the choice to cast Light (but not any other cast member) as a white man, with claims that putting a white actor in the role of a psychopathic teenager helps bring the issue of school shooters and similarly ‘troubled’ teenagers to the forefront; implicating the main racial demographic involved in such events and not placing the blame on ethnic minorities as is often done with cases of police brutality. These claims do have some merit but are still ultimately flawed, as racial stereotyping – whether of white people or otherwise – should not be a message toted by any movie. Nor do I believe that Death Note is a movie that sets out to send any kind of message about white teenagers and violence and/or bullying, which makes such an excuse even less applicable to this blatant example of whitewashing. But whether or not you agree with Wolff being cast as Light, the new Death Note seems set to completely diverge from Light’s role as the ultimate wolf in sheep’s clothing, which in itself is already one major error against the seminal franchise.

What is even stranger, though, is the casting of Lakeith Stanfield, a black actor, as L. There is, of course, no problem in casting a black actor as a main character in a major movie. However, there is a problem with casting a black actor in a role meant to be played by an actor of another ethnicity. Tsugumi Ohba, creator of Death Note, said in an interview that L was meant to be “a quarter Japanese, a quarter English, a quarter Russian, and a quarter French or Italian”. Neglecting the original East Asian ethnicities of almost every other character in the movie while casting a black actor as a character who shares both Asian and Caucasian heritage, reeks of a fake attempt at diversifying the cast, and appears more insensitive than inclusive. Only two characters in the new Death Note are East Asian – Watari, L’s assistant and a minor character, as well as Masi Oka’s role (which has yet to be announced). The fact that Japanese actors have previously played Death Note characters should not just be chalked up to the fact that the movies were made in Japan – that is, at the end of the day, yet another throwaway reason that many Hollywood studios use to downplay the need for a bigger East Asian presence in the mainstream media. Lakeith Stanfield’s casting as L may mean inclusion of ethnic minorities in general, but overall only serves to further cut East Asian actors out of movies and the mainstream media. Netflix may have had a brilliant track record for diversity so far with dramas such as Sense8 and its Marvel superhero series, but the casting for Death Note cannot be said to be anything more than racism hiding in plain sight.

When confronted about the whitewashing at hand, producers Lin and Lee claimed that “the talent and diversity represented in our cast, writing, and producing teams reflect our belief in staying true to the story’s concept of moral relevance — a universal theme that knows no racial boundaries.” But this hardly seems to be the case. The ‘diversity’ presented in the new Death Note seems skewed and utterly fake; its new Westernised storyline completely alien from what made the original so great. Will Death Note succumb to the same fate as its unsuccessful predecessors? Only time will tell.

Closer to home, blackface has been a prevailing example of political incorrectness. Read about it in our review of 2016 here.