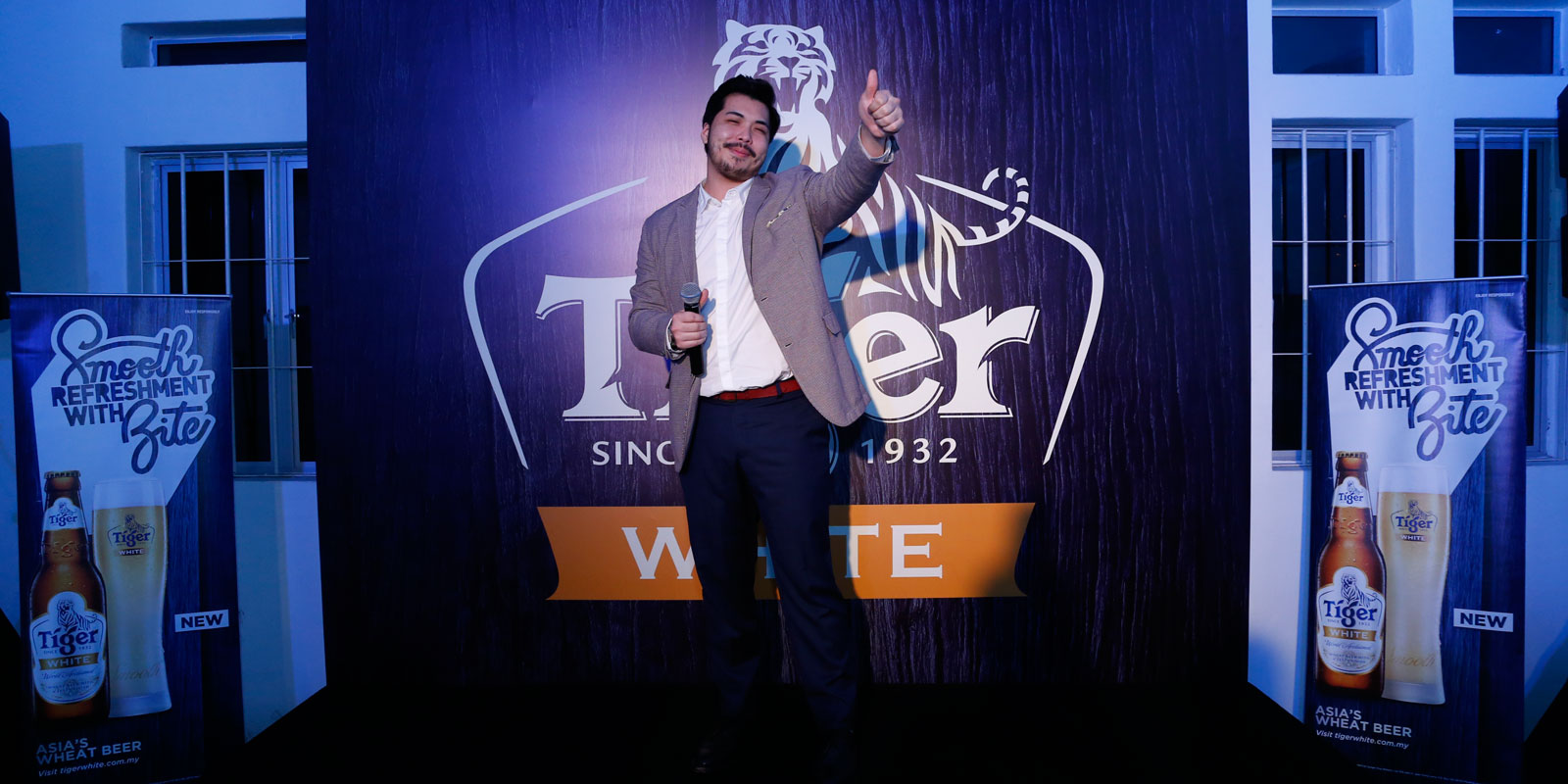 We’re kicking ourselves that we didn’t attend the first Tiger White Expect the Unexpected experience that involved eating food on a yacht. That’s a missed opportunity at an illusion of opulence, something only achievable on our own once we get that five-figure job (never). Still, the people at the Tiger invited us to join them for the second Tiger White Expect The Unexpected experience that involved dining in the dark at the eponymous dining establishment in Changkat, Bukit Bintang. We – and the others who actually entered the (simple) contest – were chauffeured from our respective pick-up points to Dining In The Dark KL. While we waited for our small group to arrive, we were given some blindfolded activities or tests that were designed to train our visionless coordination, such as fiddling for four paper clips in a small bucket of rice and beans as well as putting differently shaped blocks into its correctly shaped home. Quite banal if you were not blindfolded, but markedly more entertaining if you were.

Throughout the waiting and the small talk, it was thankfully made more facilitating due to the bottles of Tiger White. Soon after, we were ushered into the dark room, but not before we stripped ourselves of our phones, watches, and purses. Then, we were instructed to form an orderly line with our hands on one another’s shoulders (yes, much like the time we were in daycare/elementary school). After some parting words such as “Don’t strain your eyes in the dark, otherwise you’ll get a headache,” and “Remain calm,” we were guided into the pitch black room where it felt like we were entering a maze as we twisted and turned aimlessly till a great staff member who introduced himself as Marcus individually guided us to our seats.

We sat down and the onset of slight terror was coming– we couldn’t see anything. We were told that the restaurant’s waiters were either blind or visually impaired, and they sounded warm, calm and genial, with that in mind, we eventually relaxed. Before each meal, Marcus told us which direction we should begin with, generally from left to right and in an anti-clockwise direction, depending on the shape of the plate. Unfortunately while we’d like to say that with our vision taken from us, our taste buds become heightened, the reality was – and we’re embarrassed to say this – after reviewing the menu where the ingredients used were revealed to us, we felt like shameful foodie hacks as we’d thought we had much better knowledge of tasting and eating food. The best we could muster was, “It tastes like salmon,” instead of simply, “It tastes like fish.” The experience of dining in the dark, however, comes highly recommended from us. Have your next date, birthday party, or special family day there.

The “unexpected” twist of the night, as can be gleaned from the cover image, was a private performance at Feeka by the self-proclaimed cheapest and youngest comedian in Malaysia – Kuah Jenhan. Having not seen him perform before, Jenhan was like any other comedian; at turns self-deprecating, and sometimes self-aggrandising, all for the purpose of a punchline. In his comedic retelling of the many familiar Malaysian experiences, it involved sociocultural stories of the different races here – how Chinese families are during a banquet, how Malays can only communicate in various inflections of grunts, sounds, and gestures, and poking fun at the extensive length of Indian names. Also, jokes were aimed at the sexes too; Chinese boys finish short and quick, how girls put on makeup, etcetera. Usual topics for local comedians, but we still managed to laugh at a few nevertheless.

It was a Saturday night filled with new experiences, definitely better than attending a poorly attended club night – getting pointlessly wasted can become maudlin. Thanks Tiger for keeping our dignity intact for the night!

Tiger White Expect The Unexpected Experience #2 went down on Saturday 14 May ’16.