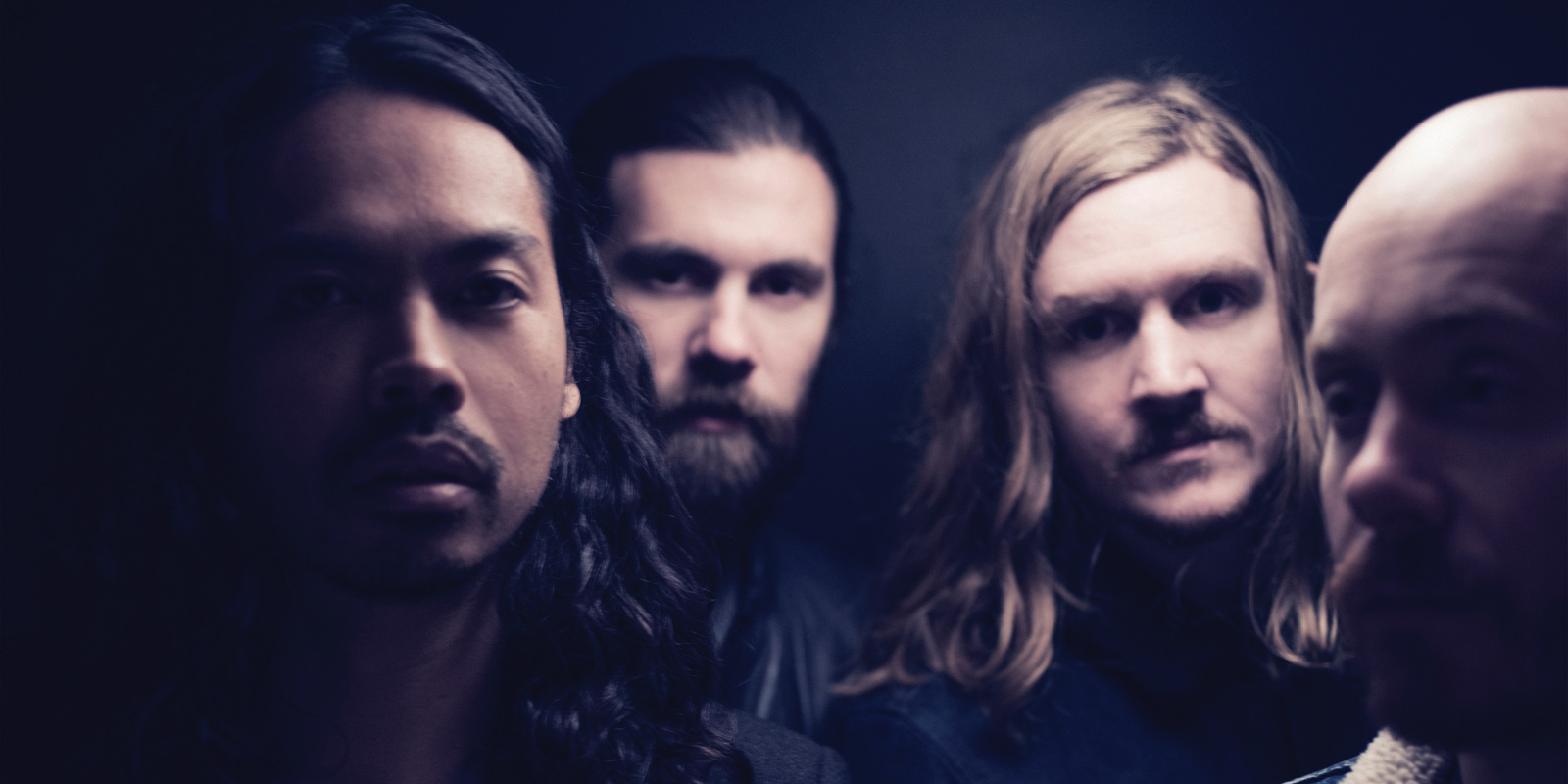 JUICE chats over the phone with Dougy Mandagi of The Temper Trap, who was on a promotional stopover in Singapore, to talk about the making of Thick As Thieves — the band’s third album in four years, writing pop songs, and his nomadic existence.

“I remember waking up at the crack of dawn, the land was so bare and dry, any plants that grew there were hostile and thorny. Mount Kilimanjaro was popping out of this cloud, everything felt so big and expansive, and the people there were friendly as well,” Dougy regales about his 10-day sojourn in the desiccated but no less astounding land of Tanzania, which led to the conception of the second track, ‘So Much Sky’, off latest album Thick As Thieves. He and bassist Jonathan Aherne were invited to the East African country to witness firsthand the progress of a charitable effort the band was involved in to build water wells for the Maasai tribe. Travelling and experiencing new places and cultures are commonplace for musicians, but if you were Dougy Mandagi, being part of The Temper Trap would compound on your roving lifestyle.

Dougy’s untethered existence has been well-documented, and a quick internet search on the Indonesian native would reveal a lifetime of displacement. He even jokes about it, “I am that nomadic person that you’re speaking about and I will never settle down and blah, blah, blah.” Nevertheless, his levity shouldn’t be translated as an inability to grow fond of wherever he decides to reside. Dougy divulges that he had left London (the band had relocated there from Melbourne) just weeks before our scheduled interview. “To be honest with you, when I had to pack my stuff, put my stuff in storage and find a place in Berlin, it was very bittersweet, I was quite emotional. It was very sad.” Only drummer Tony and keyboardist Joseph remain in London, while bassist Jonny lives in Brooklyn. Dougy realises that this arrangement may not be the most ideal, but since the album is completed and the band are currently on tour, regardless, they have to make it work.

“I am that nomadic person
that you’re speaking about
and I will never settle down
and blah, blah, blah.”

One of the most intriguing details that we found from a press release regarding The Temper Trap’s new album was the nugget of information that music producer du jour Malay (aka the man who co-wrote Frank Ocean’s channel ORANGE) was among the many producers who had worked on the album. Thick As Thieves was written over the course of two years, but the band had only taken a month long break after their last show during their sophomore album cycle. The process saw the band working in various locations, from Tileyard Studio at King’s Cross, London to Los Angeles, which resulted in a fruitful trip where Dougy had met Malay.

The collaboration brought about a song called ‘Summer’s Almost Gone’ and it was conceived while the band was at an idyllic artist residency called La Casa. “I took it over to Malay and played it for him from my iPhone and we came to a fully fleshed-out song. We actually had such a great time working in LA that we flew him out to Byron Bay to do more writing and producing.” Aside from that though, Dougy is reluctant to divulge any more information regarding the collaboration. He was similarly reticent on writing material with other producers such as pop producer Justin Parker and Damian Taylor, who’s known for his work with Bjork — Dougy simply chalks the opportunities up to the band’s label. “We just wanted to try something different – we just seized the opportunity, really. All these people called and expressed interest in writing with us, and we thought, ‘Why not?’”

“All these [producers] called and
expressed interest in writing with us,
and we thought, ‘Why not?’”

Even though the band opened themselves up to a range of external people for this album, the band had to continue working without a longstanding member as they dwindled from a quintet to a quartet when guitarist Lorenzo Sillitto — who had been with the band since 2006 — departed from the lineup in 2013. Lorenzo appeared in the documented footage at La Casa and even commented about the prospects of the impending third album, “I always felt we weren’t going to hit our stride until this next record.” With that in mind, it’s no wonder his leaving had taken his band mates by surprise. However, there wasn’t much grieving over Lorenzo’s departure as it did not deter the rest of the band from working on the album. “It was emotional saying goodbye. He has been such an integral part of the band. But afterwards, it was business as usual, to be honest. We were already in writing mode. When he left, we picked things up where we had left off,” intones Dougy.

Early last year, in regards to the conception of Thick As Thieves, drummer Toby Dundas said in an interview, “There’s Conditions and The Temper Trap, for the third album we picked the best bits and meet somewhere in the middle.” Only armed with lead single ‘Fall Together’ and (vague) descriptors such as “guitar-driven” and “uptempo” that were used by the band in interviews to provide some sonic perimeter for the album, we ask Dougy if Thick As Thieves were possibly a return to their guitar-laden debut album rather than their synth-y self-titled sophomore. “Yeah, I’d say so. We were trying to figure out a direction… So, yeah; more or less, yes,” he concurs to some extent. Within the two years when the band wrote the album, the musical direction developed and altered as work-in-progress albums inevitably do. Nevertheless, the band had agreed that they wanted to make a guitar record, and Dougy cites that particular idea anchored the band from venturing into one too many trajectories.

On lyric-writing, Dougy – much like many other songwriters – is one for keeping misery close to him like a best friend. “Sometimes, things are going really well in life, there are no real conflicts and there’s nothing to really rattle your cage. I don’t know, I don’t really wanna write about how good my day is going – who wants to hear that?” Most of the time, it’s personal, sometimes it’s based on his observations, but when both strategies fail to inspire, Dougy would conjure characters in his mind only to have them face a conflict to serve his writerly purposes. Another skill he emphasises a number of times during our conversation is the band’s propensity and capability to write pop songs. Although the band may not be the most adept at their instruments, they make up for their shortcomings in that department with this talent. He goes on to explain himself, “We’re in the business to write pop songs, so [the] ability to put together a song with great hooks and great melodies is more important, I feel, in our line of work than to be able to play the guitar very well.” Listeners of their output can certainly attest to this and their commercial success is evidence of their achievement.

“I don’t really wanna write about
how good my day is going
– who wants to hear that?”

Still, The Temper Trap’s brand of pop still circles the field of ‘indie’, and Dougy admits that the balance of writing accessible songs while maintaining a level of experimentation is a task handled with great difficulty. But he’s quick to swat the admission away as he nonchalantly adds, “Whatever, it’s good to have challenges, nothing comes easy.” He does, however, provide an example of the problems the band has encountered, and it comes in the form of their best-known yet double-edged hit ‘Sweet Disposition’. Despite Dougy being the one who brought up the song, he’s slightly wary as he tries to express his point, “Off the back of the success of ‘Sweet Disposition’, for better or for worse, it has put us in… you know, it comes with certain limitations.” No matter what those limitations may be, Dougy entertains the idea of writing, as it were, another ‘Sweet Disposition’. Of course, an artiste such as himself recognises the transient, unexplainable moment in which a hit is made. “There was something in the air that night when we wrote it. I don’t know how you’d replicate that. You can try, but I don’t know… I hope we’d write another one!” he enthuses.

Very selfishly, we ask Dougy if he’d remembered that night. The question comes out clumsily, of course. We knew it was both a corny but essential question to ask, and since the chance had presented itself, we seized it. Still, we cushion our enquiry with a laugh and thankfully, Dougy reciprocates. “We were in a little sweatbox in Melbourne. It was myself, Toby, and Lorenzo. Joseph hadn’t joined the band yet, I don’t think, and Jonny was on his honeymoon in Mexico.” He graciously recounts, “It happened organically – the moment when Lorenzo started playing that riff, or just guitar scales apparently, I’ve been told they’re just guitar scales – immediately I had the melody swimming around in my head, which was the beginning of the song. It’s a sign that we had something. We finished the song in two days, which was another good sign.” Little did they know at the time, those small indications would launch the band to the ring of international prominence.

“… there are a lot of uncertainties in this industry, but I think we just have to put our heads down and do what we love – play music that’s genuine to us and if other
people liked it, that’s the icing on the cake.”

It’s been four years since the band last released an album; we wonder if the fear of being relegated to irrelevance is something that Dougy thinks about. “Yeah, all the time, but what can you do? I mean, at the end of the day, there are only so many things in your life that are in your control and you just have to throw caution to the wind,” he answers. “I think there are a lot of uncertainties in this industry, but I think we just have to put our heads down and do what we love – play music that’s genuine to us and if other people liked it, that’s the icing on the cake. We have to be able to go to bed at night knowing that we’ve made a record that we like as a band.” Going by the fan support and reception to the new material, The Temper Trap seems to be easing back into the limelight just fine.

The Temper Trap is one of the headlining international acts slated to perform at Good Vibes Festival ‘16, happening on Friday 12 and Saturday 13 August ‘16 at The Ranch, Gohtong Jaya, Genting Highlands. Tickets are available via www.boxtix.asia.

Thick As Thieves will be out on Friday 10 June ’16 via Liberation Music.