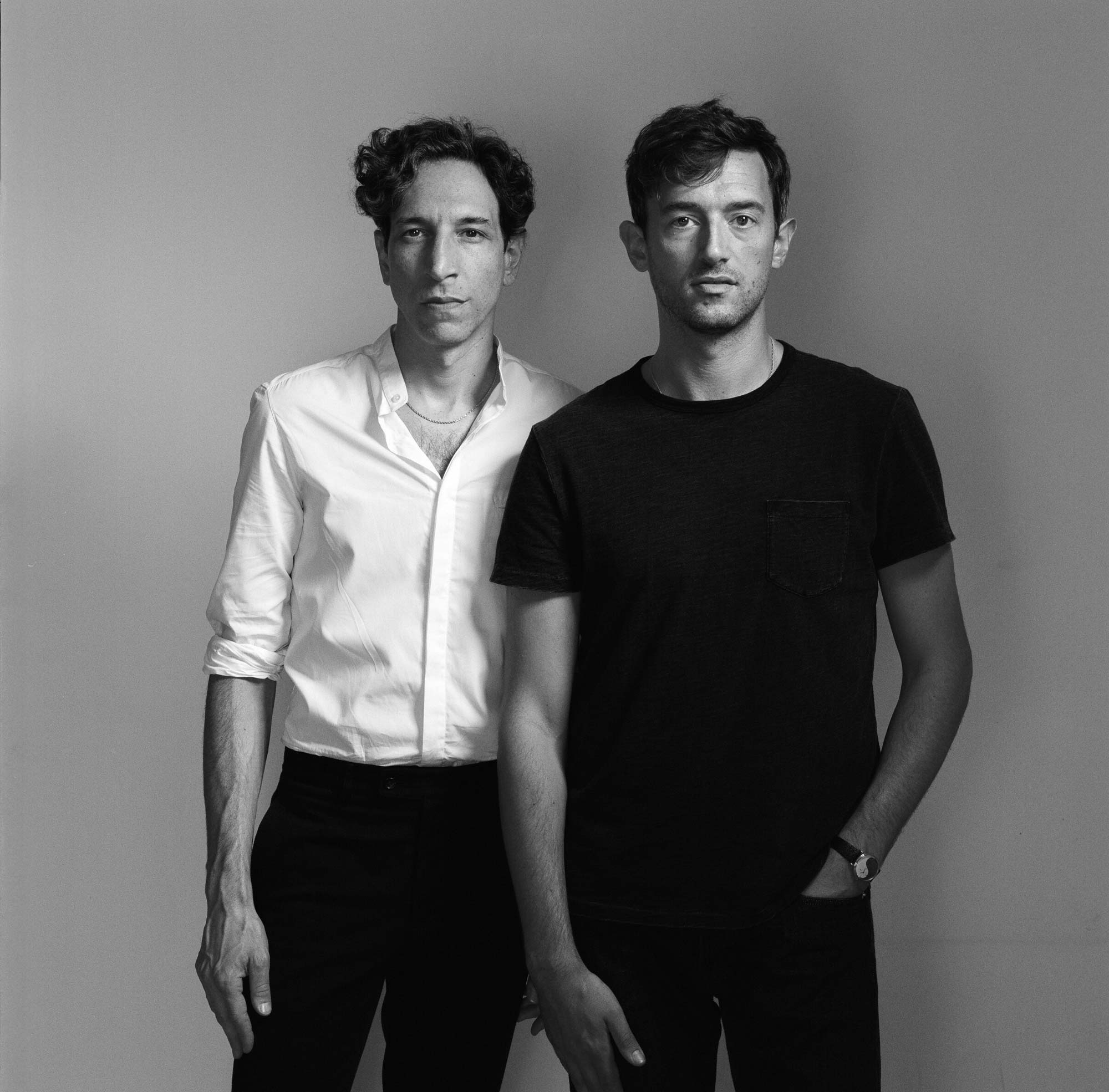 New York duo Tanlines is more known for their worldly beats that informed their synth pop sound such as songs ‘All of Me’ and ‘Real Life’. Though the music is jaunty and danceable, the lyrics are harbouring a heavier message, hence the relation to the ‘winking sad face’ that has become a mascot of sorts for Tanlines. The jokey aspect of that emoji also encapsulated the humorous personality of the band – which can be demonstrated on their snarky Twitter account and the excellent revamping of their band website, or better known now as ‘Tanflix’, as it eerily resembles the popular American media streaming website. Satire, as it turns out, is a strong suit of theirs – so it’s a relief to know that their humour is intact as they’ve grown along with the making of their sophomore album Highlights. With a confluence of fangirl glee and journalistic prowess, JUICE called up the chattier band member Jesse Cohen in New York to talk about the new album and how he’s become more empathetic to interviewers.

Tanlines’ music has always been associated with the ‘winking sad face’ emoji, but with this album, the yin yang has taken its place. Was it because you guys wanted a more sophisticated symbol to represent the band?
That is exactly what we were thinking – that’s a very good interpretation. It’s more of a sophisticated symbol of the coexistence of the two different feelings is what I would say. And this album I believe is the same thing; it’s a more sophisticated approach to the same sort of more emotional kind of music, which is both happy and sad at the same time.

On the subject of symbolism, flowers are used as the backdrop for the new songs on YouTube. Do the flowers have a significant meaning?
Yeah, well, we have these beautiful black and white flowers… I guess it’s symbolic of a beautiful thing that’s usually colourful shot in black and white. It’s still beautiful but in a different way, it’s the sort of the inverse of the album: Our album cover last time was a black and white photo of ourselves and this one is the colour photo of ourselves. On the inside of the last album, we had lots of colourful prints; on the inside of this album, we have lots of black and white photos of colourful subjects. It’s sort of a reverse play on colour I would say.

Could you tell us why you guys decided to document the band’s Pittsburgh experience and share it with everyone?
When we released that song, ‘Invisible Ways’, we thought it might sound different to the rest of our music and I wanted to tell the story of how that song came to be and why it’s significant to us and why it’s on the album. And in general, I’m always finding ways to let people in on to who we are and what we do. I had documented our trip for myself, you know? When we went to Pittsburgh and I saw all these photographs and I thought to myself, “People might like to see this,” and to give context on how the song came to be. So, that song and that little essay together became a package that was very nice.

In the past, you guys have always been open to listeners’ opinions and now, it seems that you guys are giving a sort of a guide or an informed perspective on the band’s music…
I see what you’re saying. You know, I still think that for the most part when people discover music, people will form their own opinions regardless. In this case, I thought it would be helpful or interesting to explain how that song came to be because it was so different for us. I thought I would share that with people. My feeling is still the same, I still like it when people tell us what they think of our music as much as I like to [do the same]… you know, if it helps me.

Even though ‘Invisible Ways’ set the tone for the new album, instead of it being the opening track, why was it positioned in the middle?
I don’t think there’s a particular reason other than we wanted the album to have a certain low [tone]… there are a lot of different tones in the album and we opened the album with the song ‘Pieces’, which I think is a better start to the album [and] I think is a better tone for the album. Having that song ‘Invisible Ways’ in there [means] that we could reset the album at certain points. I mean, that’s why it ended up where it is on the album.

We can definitely hear Eric’s vocals more clearly on this album, the way he emotes is very apparent. Was it a conscious decision to have a focus on his vocals?
Yes, definitely. In fact, I think there is one real story about the music on the album, the main story was about his voice because I think he did exactly what you said; it’s certainly a focus on every song we wrote. The vocals were the main instrument that we were interested in and cared about. I think he did a very good job of stepping forward on this album as a vocalist and a singer. A lot of our approach on this album came from playing the songs on the last album live – having played live with this but not really in front of large audiences – and this album, we started writing this album on tour after a year of playing in front of larger audiences and it affected the way we wrote, in terms of live instrumentation and Eric’s vocals. I think he got his stage voice in between the last album and this one. So now, his voice is a mixture of his studio voice and his stage voice, and I think it’s really good.

From the existential theme of Mixed Emotions, the songs on Highlights deal with relationships, was there something in particular that influenced the narrative of this album?
I appreciate very much your question, I think you’re a very good listener and also interviewer. I try not to talk on the lyrics because that’s really Eric. I do think that this album came from a bit of a more settled place than the last album where it came from a place of displacement and unsettledness… “What am I doing with my life?” This one came from a more of “where we landed” and yeah, it’s more about relationships than about ourselves, I would say.

You once described the band’s music as “emotionally abstract” but now with the Netflix tribute site, all of the songs from Highlights come with their own summary. Does that make everything less ambiguous?
I haven’t thought about that. It’s possible and I’m interpreting your question here… You know, from your last question you asked if this album is about existential anxiety and more about being settled, and now you’re asking me if we’re less ambiguous about how we feel about our songs. It’s possible you’re right, you know? It’s possible we’re at a place where we’re more comfortable presenting what we think the thing is than just leaving it in the air. Although I don’t think that was our thought when we created those images on the website, the images on the website are more like just to have fun and a little bit of humour.

… maybe we’re reading too much into it.
Well, I appreciate it and now you’re making me think on a subconscious level, maybe we were doing exactly what you said.

You guys made a comment about the pointlessness of having a band website these days, so we were curious why you guys chose to satirise Netflix via your band’s website?
Do you guys have Netfilx over there?

No, but we know of it…
Okay, well, whatever service you have, have you stared at a screen [thinking] what to watch? And you end up spending a lot of time on that page trying to pick what you wanna watch. Having that kind of experience, I thought to myself this is how our website should be because these are the websites that I look at for a long time and that was kind of a funny thought to me, a funny idea. And it sort of came out of that, you know? And I think it’s just a reflection of how a lot of people use the internet today, you know? And we sort of put our own spin on it and put our content onto this format that people use. It’s a reflection of that and it’s the way I use it myself.

We know that you host your own podcast – No Effects with Jesse Cohen – what insights have you gained from the artistes that you’ve interviewed?
One insight I can tell you is that you’re very good at this.

(Laughs) We’re happy you think so because we’ve read that you started your podcast because you find interviews boring and uninteresting.
They can be. They can be and I understand why, you know? Like there is this road crash aspect of doing this that happens and it’s understandable. But what you do have to understand is when you talk to somebody who’ve put thought into it or have some perspective that they bring to you when you talk about it – it’s more interesting. You know being that I just started press for this album, I’m very experienced about how it’s gonna feel having been on the other side. I can tell you that from just talking to you I’m more attentive now to your perspective and I think that’s interesting.

It’s not often that an artiste compliments us. Thanks for spending the time with us, Jesse!
Thank you. I hope to come over there. Thank you.

Tanlines: Pieces from Funny Or Die

Highlights will be released on 19 May ‘15 via True Panther Sounds.