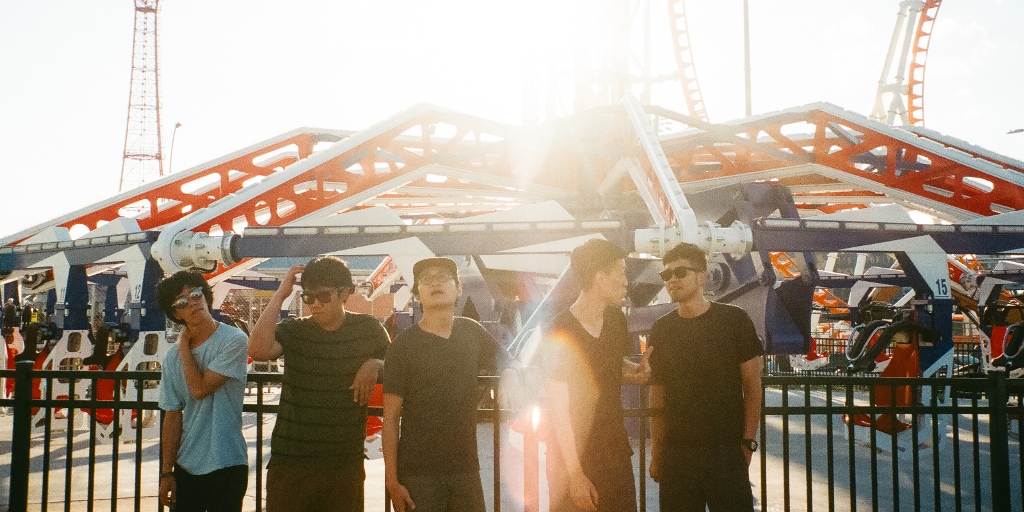 Indie band Sunset Rollercoaster is one of the few examples of city pop proponents in the Taiwanese music scene. The band began its conception as a trio with the release of their debut album Bossa Nova in 2011. Years after dispersing to their individual lives, Sunset Rollercoaster expanded into a quintet and released a three-track EP called Jinji Kikko. The EP is sweeping and languid; it lulls you into an ease that is reminiscent of a beach side holiday in a summer’s day. This sensibility can be said to be the polar opposite of the lead singer and guitarist Kuo and drummer Tsun Lung’s experimental industrial act Forests, which has been quite acclaimed in its own niche right. JUICE spoke to the band over email about their influences, writing songs by way of “trolling”, and expressing themselves as naturally as possible.

Singing in English and playing this sort of city pop in Taiwan, how receptive would you say local audiences have been to the band’s music?
Our music is kind of easy going, and it has a retro and chill vibe that is mixed with a bit nostalgia of good old times. Some have said it’s like “the music in my dad’s car,” so we would say it’s alright.

Was there a point in time when Kuo wanted to write and sing Mandarin lyrics? Possibly even conflating both English and Mandarin in a song?
I did a song that I sang and rapped in Mandarin a couple of years ago and even won a contest. In my understanding, I was trolling, not thinking that much. I’m not thinking that much now as well, and I’m still trolling with a romantic vibe – but in English. I don’t know, maybe my life will find a way to troll with writing songs in both languages sometime.

The band went through a change of lineup – adding more members into the group in the process. Why is that?
Needed more layers of the arrangement and it’s cool to have more bodies shaking on the stage.

Seeing there was a five-year gap between releases, could you guys share what did you guys do differently with the new EP?
Kuo (guitar/vocals) went to study fine art, ZL (drummer) played couple bands with other friends, Kevin (former bassist) was working as a doctor and doing some filming as well. Gump (keyboard) went to military service.

It’s known that some of you in the band play(ed) in numerous other bands, mostly popularly the noise, industrial Forests. Can you explain how did you two come to manifest the wholly different sound for Forests?
We don’t do any tricks, we just follow our hearts and let it guide us, they are lights which show us the way, and not to get lost in the immense universe of the sound.

“Playing in Forests is like rowing a boat into the unknown of our inner souls, and playing Sunset Rollercoaster is more like breezing in the summer afternoon – dazing all day.”

Does playing in different bands allow you all to properly experiment and express your ideas in a fruitful and rewarding way?
Yeah, it does. Playing in Forests is like rowing a boat into the unknown of our inner souls, and playing Sunset Rollercoaster is more like breezing in the summer afternoon – dazing all day.

Kuo once described the band as a bunch of weirdos in the context of the Taiwanese music scene. Does being outliers inform the music of the band?
Not really, we just do what we like to do, and nobody really cares if we do this or do that, we don’t have that kind of pressure. We make music; we love it, and share it, that’s it.