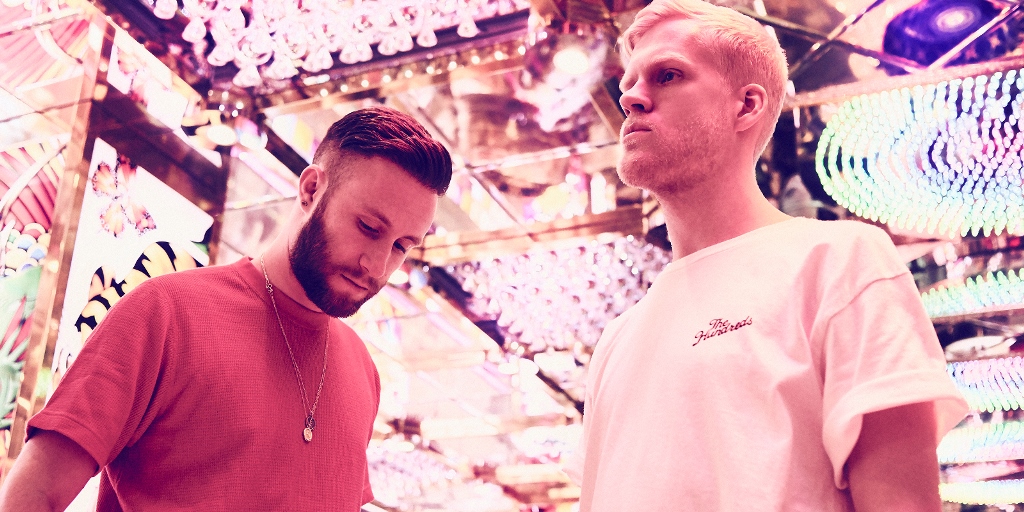 ‘All My Friends’ featuring Tinashe and Chance the Rapper as well as ‘Cruel’ featuring Zayn Malik are Snakehips’ widely recognised and most played originals, both of which have racked up a soaring amount of plays online and on radio. Before their mainstream hits, the UK producers have been on an industrious mode of releasing remixes for the likes of The Weeknd and Banks, resulting them being a regular on Majestic Casual. JUICE took the chance to speak to both Olly and James on their work process, their love for hip hop, and their thoughts on producers as the main talent on a track.

You guys work a lot of with the songwriter Cass Lowe. What is it about him that makes the songwriting collaboration consistently successful?
Cass is awesome to work with. He’s the one person we have found that totally understands where we’re coming from musically and just really gets the whole project. We also all get on really well and hang out loads outside of making music, so it just works really well.

What was the one thing that you guys talked about on the plane from HK to London that made you guys want to start working together?
(Laughs) Probably loving Ja Rule and classic Murder Inc. tunes, but yeah, generally we’re into similar hip hop stuff like Dilla, MF Doom, Wu-Tang, etc.

A lot of times, songs are made by sending materials back and forth and never actually meeting face-to-face with artistes who you work with. Would you guys prefer to have the artistes in the studio with you two if possible?
I think ideally we’d always love to work with an artiste face-to-face in the studio just to get a vibe, and we like to be involved in all aspects of the tunes, so it’s frustrating not being able to be in the studio with people sometimes. It has worked out well for us though when we have done things remotely with people, so it can be cool either way.

“I think once you’ve put out a remix that people feel, you get asked to do others.”

You guys started with making lots of remixes and things turned around when the remix for Wild Belle’s ‘It’s Too Late’ went viral. Do you guys have any inkling as to what audience would react well to?
No, it all just happened naturally. I think once you’ve put out a remix that people feel, you get asked to do others, so that’s why we started out doing a bunch of those. It’s also a really cool way when you’re starting out to produce your own tune with a really dope vocal when you might not otherwise be able to do that without a studio and stuff.

When you guys wrote ‘All My Friends’ and then eventually getting both Tinashe and Chance the Rapper to be on it, did you guys already know you had a hit in your hands?
(Laughs) No way. We really didn’t know what was gonna happen with that tune. We’d also been working on it for quite a while and when you’ve been doing that, you can kind of lose perspective.

There’s of course a rich musical history in London and you guys are influenced by living there. What sort of music that each of you two listen to that has directly shaped the music of Snakehips?
Loads of stuff. We both used to listen to loads of UK hip hop. Things like Rodney P, Roots Manuva, etc. And, also loads of UK garage and d’n’b, and then a lot of classic American hip hop and r’n’b.

“In the past, you’d get records where the producers aren’t even mentioned – and in things like hip hop, house, and etcetera, the beat can be everything.”

Currently in music, producers are placed at the fore, they’re the main talent; the singers and rappers are now the featuring acts. Do you think that listeners are now increasingly paying more attention to the production of a song rather than the vocal work?
Yeah, it’s kind of cool, I think. In the past, you’d get records where the producers aren’t even mentioned – and in things like hip hop, house, and etcetera, the beat can be everything. I’ve always listened to hip hop especially for the beats, so the fact that producers can be putting their records together and working with different vocalists makes sense.

You guys have also spoken about how most people actually don’t know how you guys look like. Is putting out your respective faces as Snakehips important in portraying yourselves as artistes? Or are you guys comfortable with letting your work represent Snakehips?
We’re cool with whatever. We do interviews and have our faces on Instagram and shit. The music has always been the most important thing for us.

Snakehips is one of the headlining acts at Djakarta Warehouse Project, happening from Friday 9 December to Saturday 10 December ’16. More information at djakartawarehouse.com.