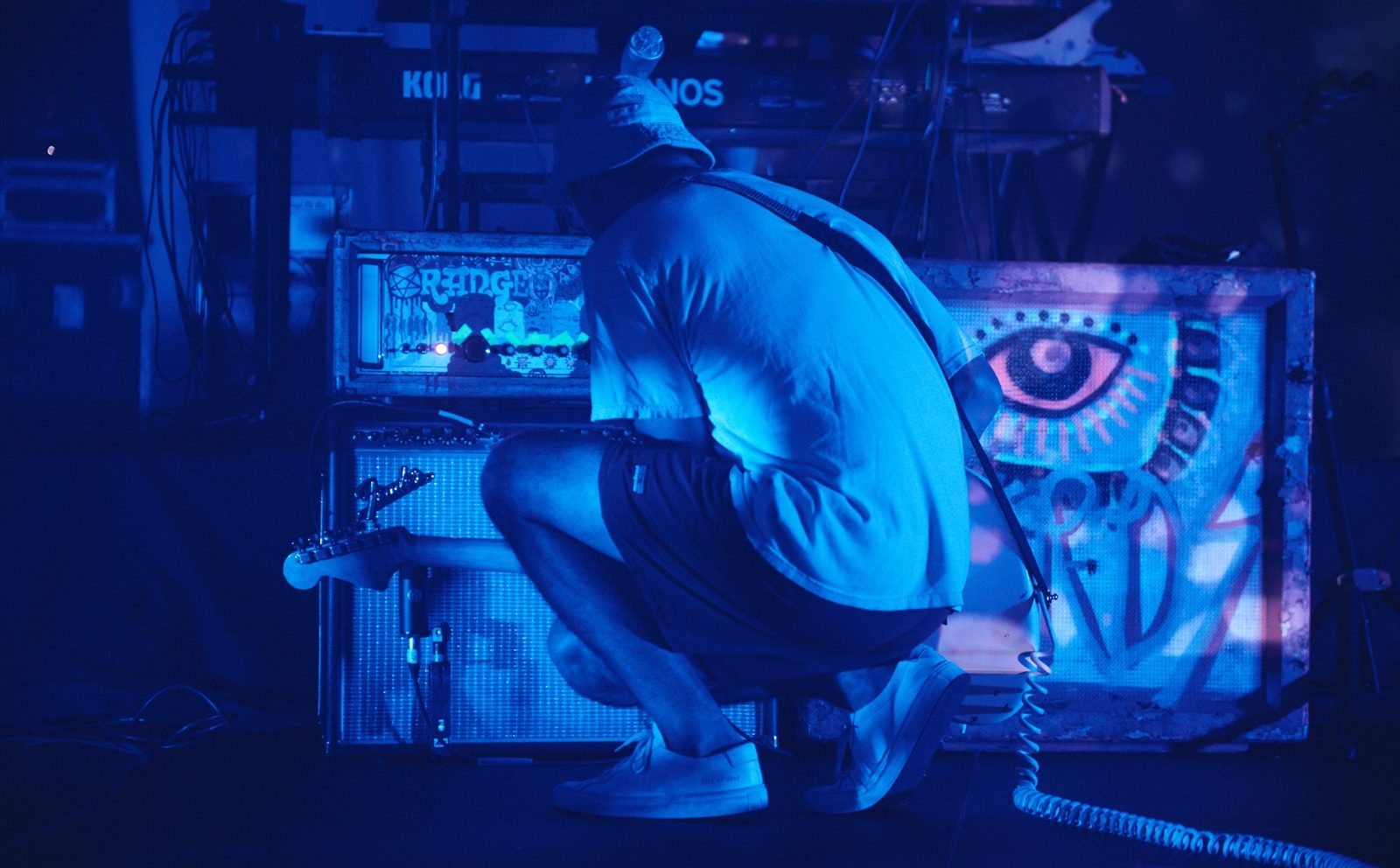 Hailing from Portland, Oregon, rock band Portugal. The Man made the world groove to their hit single ‘Feel it Still’ that earned the band a Grammy Award for best Pop/Duo Performance, and there’s clearly nothing stopping them from moving forward. Eric Howk, Zach Carothers, Jason Sechrist, John Gourley and Kyle O’Quin have been experiential with their sound over the years, proving that there’s no limit to their vigor and creativity that makes every album has its own voice and personality.

With their latest record titled Woodstock, the band channels the spirit of the rock festival of the same name, to recapture the essence of Rock’N’Roll and living carefree.

JUICE was granted the opportunity to talk to Eric Howk, guitarist and backup vocals for the band, about the band’s sound, success, politics and the future.

From proggy/punk stuff in the first album to southern blues rock in the second one and then to psyechedelic rock and beyond. What made you finally do Woodstock as a pop album?

If you listen to the element of Evil friends, it sort of has that pop sound. It kinda depends on who you end up working with. Our band has been working with guys like Mike D and Danger Mouse, those are kinda ‘pop’ people and ultimately, it’s up to whoever is sitting behind the board that gives you that sort of final sound and product. I mean y’know, we all like pop music. We grew up with 90s Hip-Hop, like Missy Elliot and stuff like that, so it was kinda an opportunity for us to be able to make that record we want to make and we talked about it. Also, wanting it to be sort of a nostalgic record. If we were playing this record for ourselves 20 years ago would we be happy with it? And I think ultimately, we decided yes, we would be really stoked on what we’d come up with.

“Some people just want musicians to play music, just shut up and don’t talk about politics.”

What makes the band so versatile? Is it the fact that you guys love exploring genres or you just get bored easily?

If you look at our group chats, it’s all about music. We’re constantly sending songs, iTunes and Spotify links back and forth. That’s just kinda a major of how we like to pick music in. It can get competitive almost if someone’s like, “Here, check out this weird band’s track, this Hollywood 60s from India.” And someone will be like, “Oh yeah? You think that’s cool? Check out this weird Russian track.” Y’know, there’s a lot of free form and the same thing goes to what we grew up listening to. We’re at an age where everyone’s got everything from Busta Rhymes to Rage Against The Machine to all that stuff. We’re pretty eclectic.

The band is very musically outspoken when it comes to politics. Have you gotten extreme backlash or got in serious trouble for it?

A little bit. We did when we kinda messed with Alex Jones from Infowars – a pretty big, dumb loud organisation. Basically, we had our friend in our music video for ‘Feel It Still’ burning a newspaper that said Infowars on it and that got us in some pretty hot water. But he’s [Jones] not a real journalist, so we don’t take his jurisdiction seriously. For us, that sort of narrative that you hear… Some people just want musicians to play music, just shut up and don’t talk about politics. We talk about this a lot, and we travel so much. We were at Le Bataclan playing a show shortly after the shooting fair, and London when the Manchester bombing happened with Ariana Grande. We need to have that perspective and those conversation, so for us to come back home after all that and say nothing after what we’ve seen? I think that’s insulting to not talk about your experience on the road. We are really fortunate and have the best job in the world. For us, it’s all about perspective and sharing about what we’ve seen.

“They’re [Woodstock Festival] a group of people coming together on a street that can change history so much more than a President, one man or one law ever can.”

‘Feel it Still’ came as a surprise success since rock music hasn’t been making mega hits as of late. What do you think is the magic formula behind this song?

We wish we knew, man. It was so right and it came together so quick. It’s just a super, natural song and if anything that’s the lesson we take from it is that, y’know, so much of that song was sort of born out of first instincts and first ideas coming up and they just work. That playful melody is kinda like the same chorus on ‘Please Mr. Postman’ by The Marvelettes, which worked years ago. Our lawyers would love it if we’d change the note but that was our first instinct, just kinda humming something that we’ve already listened and it just worked, nothing else sounded right. I think it’s a really special moment, it’s just the right song at the right time.

Despite the vibrancy of the single, Woodstock as a whole contains an underlying message about the current political climate. So what can the album provide in times of turmoil like this?

We didn’t go into it trying to be Rage Against The Machine, you’re never gonna be more political than those guys are. I think if anything the message we’re trying to spread with that is sort of a renewed concert, which is what I think the original Woodstock festival was all about. They’re a group of people coming together on a street that can change history so much more than a President, one man or one law ever can. So I think it’s just trying to get back in and recapture some ideals of that time, that as a group, we can achieve multitudes even in the face of changing our unfriendly political climate or you know, idiotic President. We can come together and use our voices to create something contrary to it and get to the other side. That’s kinda always been how the spirit of Rock ‘n’ Roll is like, so we just kinda going back into the history books.

“We’re pretty fortunate to be able to stay on the road for 12 years and make that fanbase first.”

The eight album brought out your most mainstream hit yet. Do you think you’ll feel the pressure to achieve similar success from your singles and records in the future?

Nah, we’re just gonna keep doing what we want. With this eight album, we have a record label here on Atlantic Records, and we basically told them after we’ve spent all this time and all this money recording a lot of songs that we were just gonna throw all the songs away, start from scratch and re-record the ten songs that were important to us, and they charged no questions. We’re not one of those sort of pop projects where they’re pouring millions of dollars into billboards or anything like that. They kinda let us do whatever we wanna do creatively and there’s no one looking over our shoulders.

At this point, we’re pretty good in terms of just being able to get out on tour. People who totally get it, get it. We’re pretty fortunate to be able to stay on the road for 12 years and make that fanbase first. We’re gonna keep trying to push our art forward and make the most interesting and compelling songs to us. There’s no pressure, we do what we do.

Are there any plans for a tour in South East Asia in the future?

I really hope so man. Right now we’re still on our schedule for the next year and so forth. The schedule always change and there’s all these places that you wanna play, and we wanna play as many places as we possibly can. There’s never anywhere that we actively trying to avoid, or you know, playing favourite field. I really hope that we get to go over there soon because everything I’ve heard about it – just the concert fans, the loyalty and the sort of celebration that you get over there just sound really appealing to us and yeah, we can’t promise you anything yet but know that we’re trying. We’ll make it work.

Listen to their new single ‘Live In The Moment‘ off their new record Woodstock.

Interview: George Maple Welcomes Those Fears That Makes Us Human

Australian singer/songwriter/producer George Maple will be releasing her debut LP, called ‘Lover’ – 27 Oct’ and we got the chance to catch up with her!