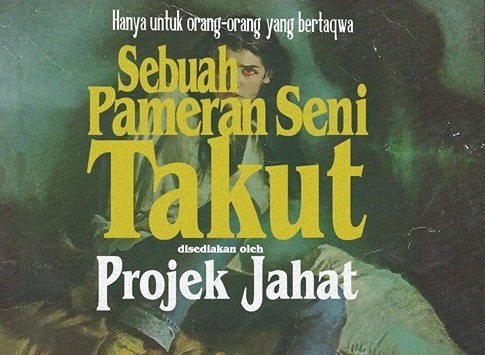 Projek Jahat is hosting a showcase at Minut Init called Takut. Not to be mistaken with the feeling of fear, this gallery is all about finding the true meaning of ‘takut’ (fear) and ‘taqwa’ (piety). The showcase will be going on for a week so you’ll have plenty of time to prepare yourself for it.

Projek Jahat stated that this showcase is meant for people who are God-conscious or God-fearing because for them that is a genuine fear. They will also be including a project called ‘Seluar Jin’. In Islam, jinn is created from fire and unlike ‘malaikat’ (angels), the jinns either have faith in God or not, similar to us humans.

To explore more of their deeply metaphoric concept, have a look for yourself whenever you’re free on those specific dates.

No idea on what to do this month? Find more events here.