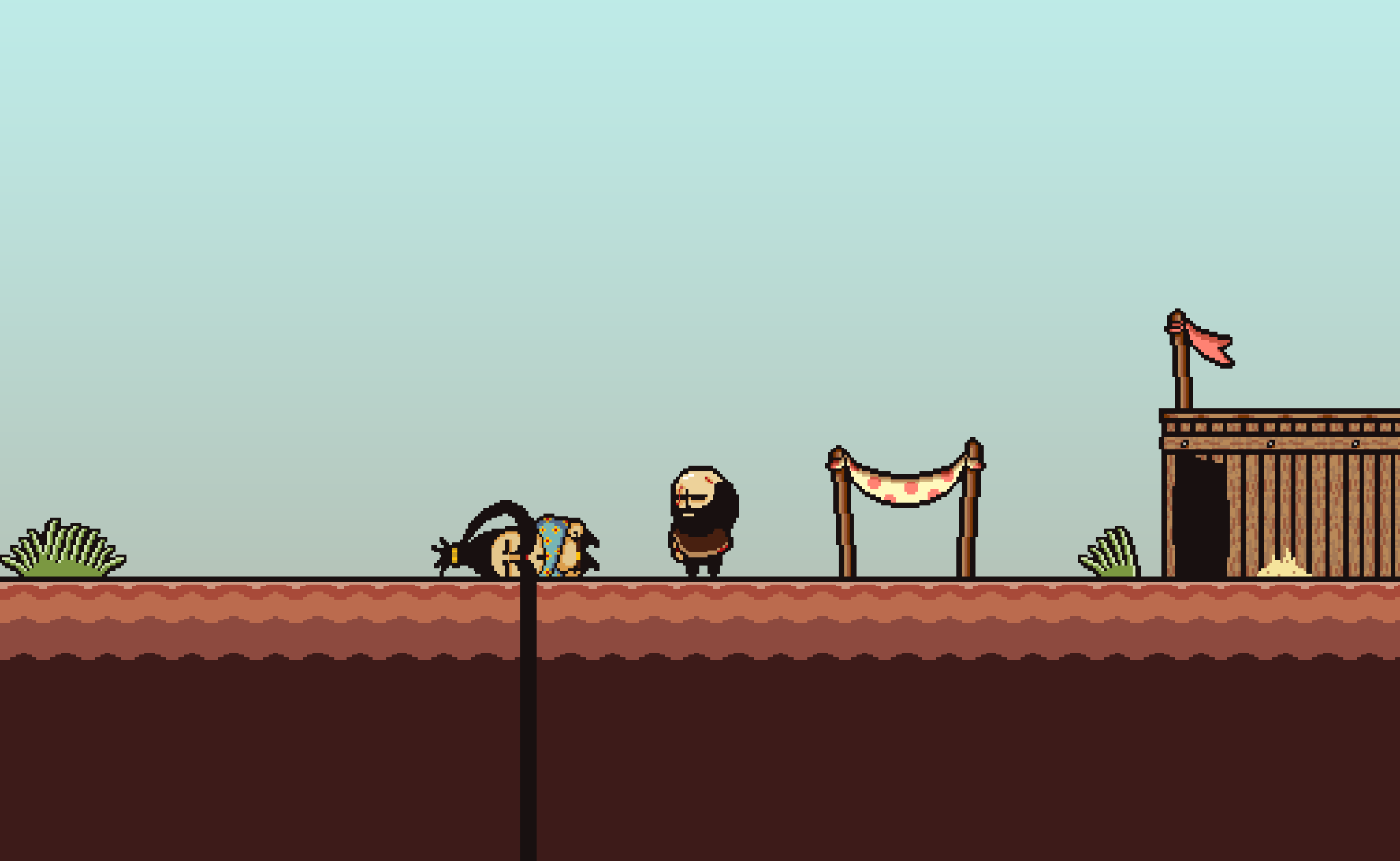 Tired of playing the same EA Sports games year after year? Disillusioned with the Call of Duty franchise’s slow descent into the gaming pit of shame? Want to play a game that’s fun, innovative, and different? We at JUICE are committed to bring the often unheard voices of indie game developers to the forefront, and to give their art the exposure it deserves.

Previously in this series, we interviewed the good folks at Red Candle Games about their debut release Detention, which has been making waves in the Western video game market and in its home country, Taiwan. We’re not running out of steam any time soon, either. The indie video game market is a vast, untapped resource, and we’re digging deep for the finest diamonds in the rough – so stay tuned to our feature series for more.

This time around, we had a gander at the side-scrolling RPG, LISA. The game consists of three parts – an exploration-based first instalment, Lisa: The First (which is available for download here), the second (and largest) instalment, Lisa: The Painful, and the story’s final chapter, Lisa: The Joyful – all of which incorporate pitch-black humour, plenty of kung fu, and a story that alternates between heartwarming and disturbing at the drop of a hat. Video games rarely make you enjoy them to the degree that you might even go to hell for doing so, but LISA nails that feeling perfectly with its vicious wisecracks, artful (yet gory) surrealism, and its cast of all-round terrible human beings that are ever so relatable.

The main crux of LISA‘s story, which takes place in The Painful and The Joyful, takes place in a post-apocalyptic desert world completely devoid of women – all of whom disappeared into thin air after a mysterious event known only as The Flash. At the start of The Painful, you play Brad Armstrong, a middle-aged man who endured a tortured childhood only to grow up and face the utter bleakness of the desolate wasteland that is the new nation of Olathe and its population of lonely, creepy men. The dollar has been replaced by nudie magazines; the new currency of this male-dominated world. Men indulge in wrestling competitions, kung fu duels, and deadly rounds of Russian roulette to assert their dominance and masculinity over each other. In the midst of all this macho mania, all Brad wants is to live a peaceful life in his hut – but all that changes when he finds the last female baby on earth; a girl who he names Buddy. Brad and his three childhood friends manage to raise Buddy in total secrecy at first, but when she is abducted by Rando, the playground bully now all grown up, Brad must take an epic journey through the Olathian wastes to save the one good thing that ever came into his life.

LISA looks and feels like a run-of-the-mill pixel RPG at first, and you wouldn’t be completely wrong to say that. The First was made entirely on RPGMaker (every aspiring game developer’s first foray into crafting one, of course), and The Painful and The Joyful follow suit stylistically. But never underestimate the simple RPG – LISA‘s Final Fantasy-esque combat sequences, when combined with its surreal (and at times brutal) cast of villains, as well as dial combo kung fu sequences and hilariously animated skill sets, could even rival your typical live-action combat games on the strength of its quirkiness alone. What’s more, LISA is a harrowingly realistic look at a society made only of males – poop and fart jokes aside, its set of testosterone-fuelled characters often take their anger and/or libido way too far, resulting in devastating consequences. This is one RPG that really wasn’t made for children, and could even reduce a grown man to tears if he made the mistake of getting too attached to any one character.

In order to take a deeper look at this modern classic, we had a chat with game creator Austin Jorgensen to talk more about the ideas behind LISA and the creative process that shaped it.

“I like to take what is popular or mainstream, especially things I resent or find idiotic, then rebirth it in my world.”

How did you come up with the idea for LISA, and how did that grow into the game that it is today?

All the LISA games start from a very ‘cheap’ place. Lisa: The First was a Yume Nikki clone I never expected to be played by anyone. Lisa: The Painful was a response to The First gaining a small cult following. It’s a product of its time, based on the sad dad stories and post-apocalyptic nonsense that were everywhere in the last couple of years. Lisa: The Joyful, I did as a stretch goal, otherwise I would have kept what happens after The Painful up to the audience. So ultimately, I like to take what is popular or mainstream, especially things I resent or find idiotic, then rebirth it in my world.

LISA has a huge cast of characters that you can recruit, each with their own very unique quirks – from Ajeet the playboy to Harvey the fish lawyer. How did you create such a wide range of characters, and what’s the most interesting way you’ve come up with a character?

I knew early on that I wanted a lot of party members; it was a selling point for the game. I always love characters, I love to create them. I see it like pro wrestling. A good pro wrestler knows that the second they walk out from behind the curtain, the audience has to be able to identify their character immediately. Are they good or evil? Where are they from? What’s their gimmick? Almost like stereotypes. Strong identities.

“Dark Souls proved to me modern gamers can handle the abuse and loss.”

A lot of video games coddle their protagonists – nothing ever bad seems to happen to the main characters in RPGs. LISA, on the other hand, is a game that makes it unavoidable for Brad to escape his own share of unhappiness. Was it hard to just write in misfortune after misfortune for all your characters, or was that the plan from the start?
It was the plan, Dark Souls proved to me modern gamers can handle the abuse and loss. Some are even attracted to the challenge. I actively tried to create these moments, I didn’t care if anyone quit or got frustrated, and that mentality helped me to not think about the result (laughs).

What were your biggest inspirations when making LISA?
Earthbound, The Last of Us, and [the movie] Fist of the North Star.

“… at the time [Lisa] was like a big silly diary that I didn’t even realise I was confessing into.”

The depiction of a hyper-masculine society in LISA seems eerily accurate, down to the incredibly creepy comments about Buddy and the need for gladiatorial sports like wrestling as entertainment. Was this universe’s creation shaped by your background and experiences as a former martial artist, or by something else altogether?
It’s just me. I didn’t have any master plan, I’m not that calculated. I was lucky to feel like I could express myself without fear of judgement, at least it’s how I felt when making the game. I wasn’t thinking, I was just making stuff. I’d say things are different now that I have more people paying attention to my work, but at the time it was like a big silly diary that I didn’t even realise I was confessing into.

“I like that every person I talk to has their own idea of what Lisa was supposed to be, it helps me understand better what exactly I made.”

The defining theme running through LISA appears to be the importance of family and friends, and how it’s important to stick together. Was this informed by any personal experiences of yours, or did you just want to tell a story about a family in a different way?
Again, I didn’t know where I was going. I don’t know what the message is. I just tried to make something that would make people laugh and/or cry. I like that every person I talk to has their own idea of what Lisa was supposed to be, it helps me understand better what exactly I made.

You also made the original soundtrack for LISA, under the name Widdly2Diddly. What made you want to use a different alias for your music instead of simply taking credit as Dingaling Productions?
I figured the ending credits will look so lame if there’s only one guy that did everything. So I used him as a way to make it seem like this game was bigger than it actually is. I tried to add as many ‘credits’ as I could!

As Widdly2Diddly, your work on LISA is being hailed as one of the best video game soundtracks out there today. From sampling Toro y Moi on LISA’s defining track ‘Summer Love’, to making straight up trap beats on songs like ‘666 Chop Kill Deluxe’, it’s definitely a soundtrack many could listen to removed from the context of the game. What is your creative process like when it comes to music? Do you make music with the game in mind, or try and fit tracks that you come up with to different parts of the game?
Yes, my goal was for it to not sound too ‘video game-y’. Some songs could, but I wanted the important songs to stand on their own. Like the pro wrestling thing, I love stuff with a clear identity. You either love it or you hate it. No grey area, no middle ground. I very much try to visualise how the music will work with — or even overpower and takeover — the visuals. I believed the crazy music would help make ‘boring’ RPG battle mechanics more tolerable.

Tell us about what the future has in store for Dingaling Productions. Your next game, Ninja Tears, is currently in development – can you tell us anything about that, too?
I can tell you it has been tough! A much more different process than what I was doing with LISA. You’ll have to wait till 2018 for more news on it…

LISA is out now for PC, Mac, and Steam OS.

Read the previous article in the series here, or check out some other brilliant indie games here.