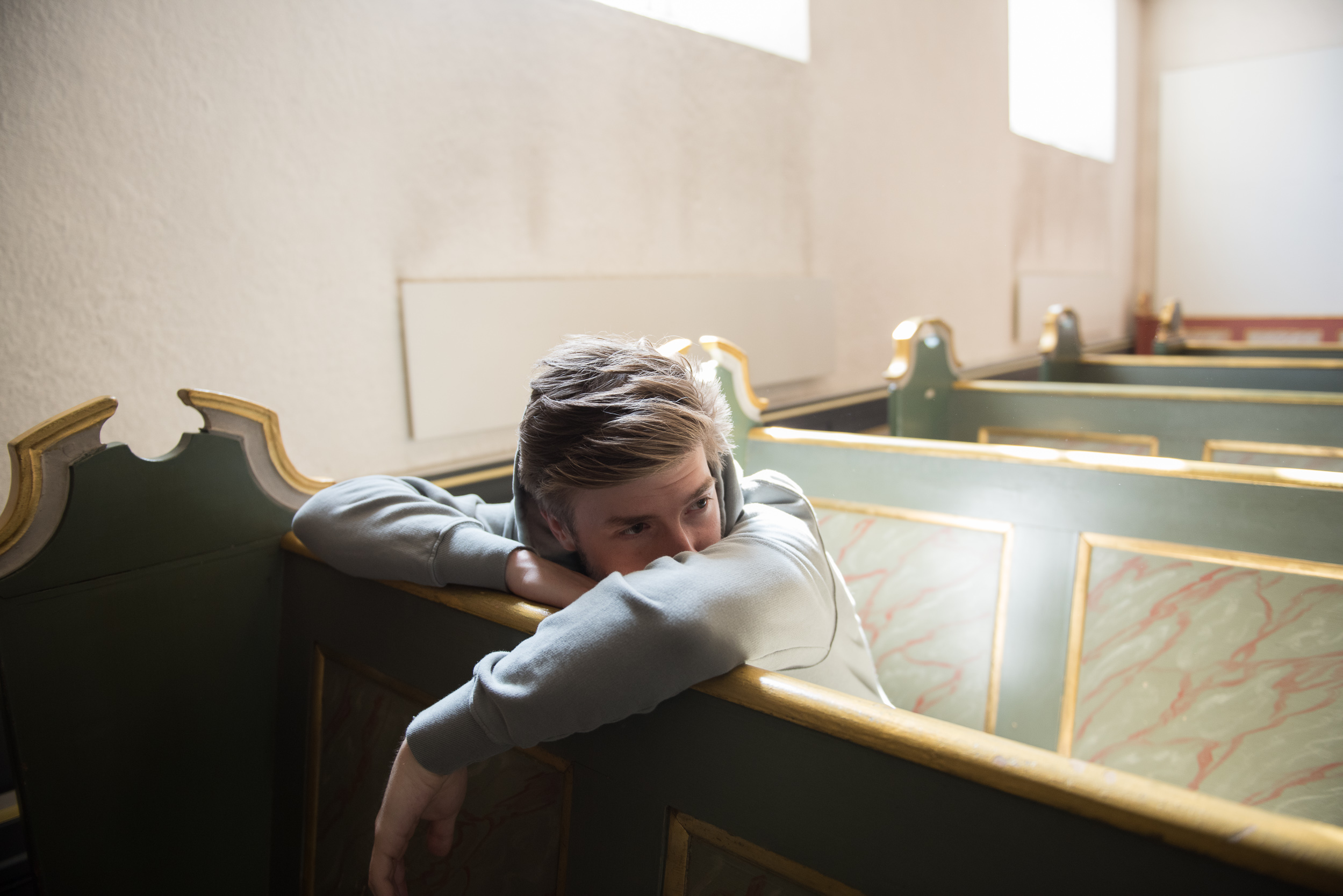 “Who is Lido?” was the question on the lips of anyone even slightly into the electronic music scene. Nobody could put a face to the name, only some very bop-worthy tunes – hyperactive, neon hip-hop with hooks that were catchier than any other pop song’s chorus out there. Lido was already at the zenith of fame when the man behind the music (and the mysterious moniker) finally surfaced as Peder Losnegård, a Norwegian-born, LA-based beatmaker whose work transcends the borders of pop, hip hop, and EDM.

At only 24 years old, Lido has made a name for himself unlike any other. As an artiste, he’s embarked on a sold-out US tour for his debut album Everything, and reimagined all of Kanye West’s The Life of Pablo into an eight-minute remix while sleepless on a plane. As a producer, he worked on rising indie pop star Halsey’s debut album Badlands, and has collaborated with star-studded names such as Chance the Rapper and Cashmere Cat. He’s clearly a musician that doesn’t do things in halves, and this August, he’s bringing his emotionally-powered, energetic live set to our shores at Good Vibes Festival in Genting Highlands. We managed to sit down with the man himself for a little chat to find out more about what makes him tick beneath that multi-talented exterior.

It’s been almost a year since your album Everything first came out. Looking back, are you happy with how it came out? Do you ever listen back and wish you could’ve made certain changes?

“… the playlists that are popular now are like really well-curated albums. I think people are going to start listening to albums more again.”

A lot of electronic artistes – in the mainstream at least – actually aren’t recording albums because of the short attention span of listeners. What made you, as a new artiste, want to record a full-length album?

I think that’s going to change very soon – we saw for a long time when the radio was very important and when people’s attention spans got shorter and shorter that people weren’t able to make albums any more. But now, with streaming services, people have started using playlists more, and playlists get popular and famous because of how well done the playlist is. You can relate that to an album – the playlists that are popular now are like really well-curated albums. I think people are going to start listening to albums more again, because the market is so oversaturated that if you put out one song, you’re competing with hundreds of other songs that come out on the same day. But it’s important to put out a good body of work, so that people can use it the same way they use a playlist. Also, I just really love making albums. I love making albums more than making single songs.

You’ve collaborated with so many big names out there in pop and rap, like Chance the Rapper, Halsey, and Cashmere Cat. Has there been a favourite person you’ve worked with so far? And who’s your dream artiste to collaborate with?
I think the favourite artiste I’ve ever worked with is Chance the Rapper. We work really well together because he’s inspired by a lot of the same music that inspires me. He loves gospel music, r’n’b, and rap from Chicago – these are all things that I love too. We really connected through that, and we’re similar people in a lot of ways, so that’s definitely my favourite collaboration, and I’d wanted to make it happen for a long time, so I consider myself very lucky to have gotten to work with him.

“[Kanye West] has such an interesting mind to me, and he has such crazy ideas – I think that if we made music together it would be very different…”

In terms of artistes that I have not worked with yet, I would want to collaborate with Kanye West. He has such an interesting mind to me, and he has such crazy ideas – I think that if we made music together it would be very different and interesting. I’d be very curious to hear what that collaboration would sound like.

You released a song last month, ‘Not Enough’, with the duo THEY. It’s quite different from your previous work. What inspired you to write the song?
I’ve been working with THEY. for a little while, and we’d written a few different songs together. One night, we were in the studio, and we were really inspired by a subgenre of early ‘90s r’n’b music called new jack swing – which is what Bobby Brown and other incredible artistes at the time were making. So we decided that it would be funny to experiment and make a song that sounded like it was made in the ‘90s. It was a fun experiment, and we wrote the song out of conversation. All of us have felt the way that the person in the song feels – even though I don’t think any of us feels that way at the moment – so we decided to make something fun. We didn’t really have a plan, or know what to do with it, so we just decided to put it out and see what’d happen because we really loved the song.

“… being a drummer was an important foundation – rhythm to me is probably the most important part of music.”

You went from being a drummer to a rapper, and then to an EDM artist. How did that transition go?
Quite smoothly. I think being a drummer was an important foundation – rhythm to me is probably the most important part of music. The rapper part was a very short period of my life, but I do think I’m going to start singing more again. The thing I found out from being a drummer is that I love music so much, but I have to write it. And that’s why I became an EDM producer. I wanted to write all the parts of my music. When you’re an electronic producer, you can control all aspects of your music, and that was really appealing to me. So the transition was pretty smooth, and each stage has played an important part in my life. I’m happy that I’ve gone through them.

What was the rap scene like when you were growing up in Norway? Is it as lively as it is in the USA?
No, it’s definitely a lot smaller. Norway is a small country in general. Most of my music education in general was from the internet, and googling different genres and musical artistes as well as looking through videos on YouTube and discovering music online. That was my main source of inspiration and education. The scene in Norway definitely exists, and there are very talented people in Norway working in all genres of music, but I grew up in a very small town up in the mountains in the middle of nowhere, so I didn’t have many people around me that could teach me about these different genres of music.

Your rapper name was ‘Lil P’. How did you later become ‘Lido’?
It was kinda random. When I was 12 or 13, I travelled to Kenya and did a musical project with a charity organisation. I met this little boy there who was probably seven or eight years old, and he gave me the name Lido. I never understood what it meant, but he gave me that name and I really liked it. So I stuck with it, and got all my friends to call me Lido, and that just became my name after that trip.

“Even though I was a pretty big artiste in Norway, it’s still a very small country, so it didn’t feel like I was famous.”

You got involved in the music scene at quite a young age, and reached national fame in Norway when you were a teenager. How do you feel about that? Did such huge fame affect you in any way?
I think it was really good practice. I learnt a lot about myself and about performing music and being an artiste. Even though I was a pretty big artiste in Norway, it’s still a very small country, so it didn’t feel like I was famous. I always felt like I was very fortunate to get to make music as a job. It’s taught me a lot and given me experience for what I’m doing now, but I’m still very proud of what I made and grateful that I got that training.

Were there any older naysayers who tried to discourage you from doing what you were doing at such a young age? How did you cope with that?
I’ve definitely experienced a lot of that in my life. There will always be those that want to put you down, and to discourage you no matter what you do in life. But I think the most important thing to realise in those situations is that those people are people too, and they say what they say for a reason. When you’re an artiste, you often think of criticism as this world that’s telling you, “What you did was right!” or, “What you did was wrong!” or even, “What you did was bad, and you should stop!” But you have to remember that these are people who are also going through things in their lives; who are also frustrated about things; who are also mad about things; who might be jealous of what you’re doing because they tried what you did and failed at it. When you realise this, that changes things very quickly. At least, that helped me a lot.

I grew up in a very small place, and when I started making music, none of my friends really liked the music I was making. But I really liked it, and I wanted to continue making music for myself. That’s the most important thing ­– if you make music, you have to make it because you love it, and not because somebody else loves it, because that can always change just like that. But you will always trust yourself, and you will always have that love in your music if you stay true to yourself. Those two things helped me a lot – learning to love my own music, and learning that other people who say stuff about my music don’t really matter because they’re all people just like me.

How do you feel about coming to Malaysia and seeing your fans here for the first time?
I’m super excited! I didn’t even know I had fans out here and I’m really excited to come meet everybody who likes the music.

“You can expect a lot of crazy emotions [at GVF2017] as well – I write music that’s very personal to me, and I usually have a very emotional time onstage myself.”

What can we expect from your set at Good Vibes Festival 2017?
A lot of crazy energy, different instruments onstage, and me running around. I’m going to be playing most of my album, and maybe some new music that most people haven’t heard before. You can expect a lot of crazy emotions as well – I write music that’s very personal to me, and I usually have a very emotional time onstage myself. It’s only going to be me onstage, but I bring a lot of different things with me, and I have a lot of fun with that.

Get your tickets here now, and keep your eyes on the festival’s Facebook page for more updates.