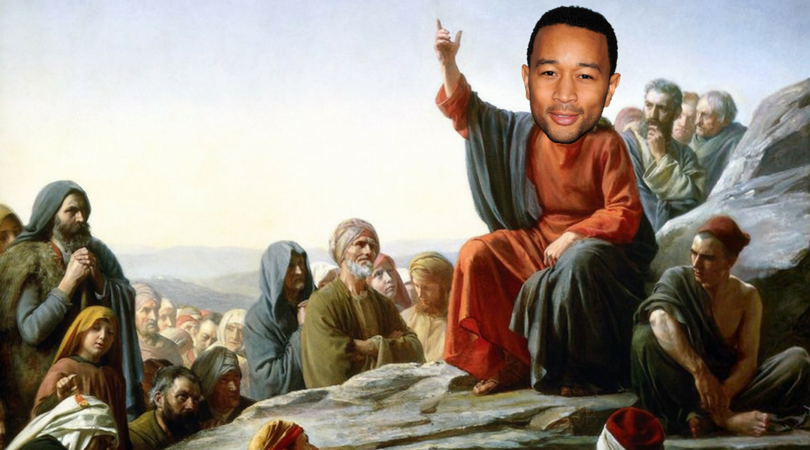 We all love John Legend, because seriously, what’s not to love? He’s got a voice fit for angels, he’s an amazing husband to the Queen of Twitter, Chrissy Teigen, and well, we could go on and on about him. But bottom line is, he’s a good egg—good enough to play Jesus in NBC’s upcoming live musical Jesus Christ Superstar.

According to Variety, the live musical will be coming on—you guessed it—Easter Sunday next year. So it’s official, Legend will be playing Jesus, and to be honest, we’re not entirely surprised. We’d probably choose Legend to play the role too, since he does have this messiah vibe going on around him, and if Jesus could sing, wouldn’t it be nice to think that he’d have a voice like Legend?

“We’re all overjoyed to have world-class musical artiste and producer John Legend starring as Jesus,” said Robert Greenblatt, chairman of NBC Entertainment, in a statement.

“This score demands a singer with an amazing range and an actor with great depth, and there isn’t anyone better to bring this story to a new audience. His casting is also groundbreaking as the traditional image of Christ will be seen in a new way.”

Yep, sounds like Legend to us. With that, Legend expressed his excitement on the announcement of his role in a recent interview.

“I’m thrilled to join the cast of this production of Jesus Christ Superstar Live in Concert, it’s such a powerful, meaningful musical and I’m humbled to be part of this performance. We’ve already formed an incredible team, and, as we finish casting, I’m certain we will put together some of the greatest talents around to do this work justice.”

Being the ever-supportive wife she is, Chrissy Teigen took to Twitter to comment on her husband’s latest role. Now, she’s the Queen of Twitter for a reason, and as usual, she didn’t disappoint us with her smart mouth and epic clapbacks.

How are they gonna fit u in the manger

Legend was quick to reply the tweet, and no shocker here, with just about enough wit to match his wife by referencing to the many photos of babies that fans have claimed look like him.

One of the many baby John Legends will be in the manger https://t.co/mc2IJfcLgm

Or perhaps John, Arthur could play baby Jesus, since we all know how much y’all look alike.

John when you tell him he looks like Arthur pic.twitter.com/0NW3NDtAb1

Jokes aside, we’re all pretty excited to see how this all plays out. What do you guys think about John Legend playing Jesus? Tell us about it in the comments!

Ryan Reynolds is the Pikachu You Never Knew You Wanted