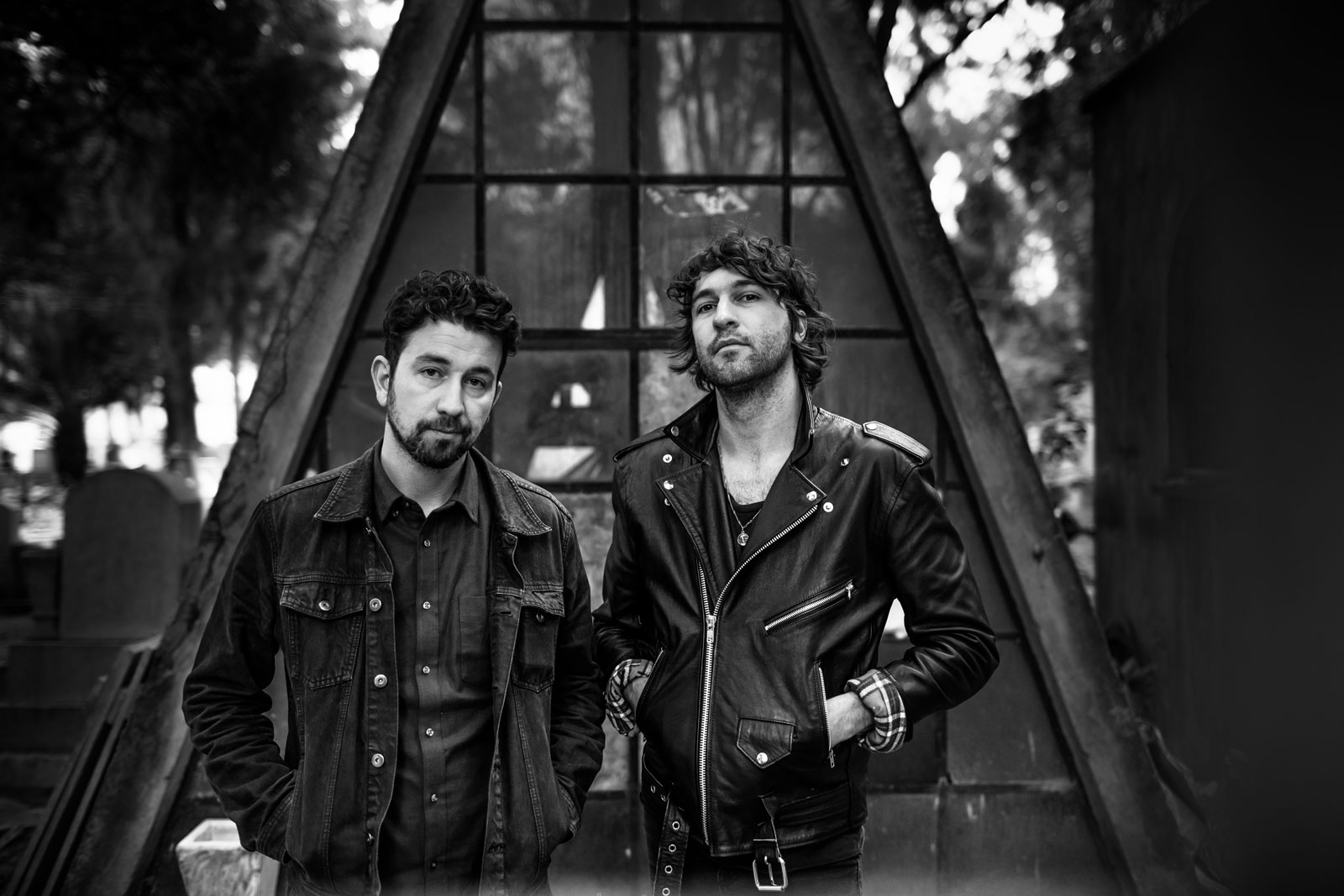 Canadian duo Brian King and David Prowse, together known as Japandroids, makes good ol’ rock’n’roll – the kind that used to be steeped in myth and made of legends. Most evident in the grand sound and heaven-hell motif of the appropriately named sophomore Celebration Rock, you’d think the two look the part of rock gods, but they are very much like Average Joes. Because we love bothering bands when they are coming over for a gig, JUICE managed to speak to Brian on the purportedly hated album name, his fondness for sci-fi, and being self-effacingly Canadian.

What’s good, Brian? What are you up to at the time of answering this question?
We are at home in Vancouver, resting after an extremely long fall tour.

We read that Post-Nothing was written with only yourself in mind and that Celebration Rock was with an audience in mind. What were the challenges of writing for yourself vis-à-vis for an audience?
I find writing songs to be quite difficult regardless of whether or not I am writing strictly for myself or with an audience in mind. The biggest challenge when writing with our audience in mind is how to go about giving them what they want, while at the same time satisfying yourself, and on top of both of those things, not becoming simply a parody of yourself.

During the recording process of Celebration Rock, you guys faced a writer’s block. How did you overcome it? Do you ever feel like writing during that particular phase might have made some of the lyrics sound forced?
The following excerpt is from a Grantland article on Celebration Rock;

“And now along comes Celebration Rock, and it’s like Japandroids went down to the crossroads and came back offering up The Bends as the follow-up to Pablo Honey. Sessions for Celebration Rock were reportedly difficult and plagued by writer’s block, which pushed the official gap since Post-Nothing to a near-disastrous three years.” – Steven Hyden

To clarify, we never faced ‘writer’s block’, and the reason we took three years between records was that our first record was so successful, that we spent nearly two full years touring around the world in support of it. We then spent the following year writing, and recording our second record. This the same model used by almost all modern bands who have very successful albums, including (but not limited to), Arcade Fire, Yeah Yeah Yeahs, Radiohead, The National, Fleet Foxes, The xx, etcetera.

We did, however, feel stifled and uninspired in Vancouver, and ended up relocating to Nashville, Tennessee to continue writing. While the writing process was forced (in a sense) due to time/financial constraints, at no point were the lyrics actually ‘forced’ and I don’t believe they sound forced at any point on the record – quite the opposite, actually. I believe these are our strongest lyrics to date.

The album was recorded due to you guys having trouble adjusting to going back to a sedentary lifestyle. You guys are on tour now, feeling relieved?
Yes, very much so!

What decision during a tour led to you guys saying this; “it’s best not to make any major life decisions on tour”?
I meant it more in a general sense, rather than a lesson learned from any particular decision I had previously made. As in, wait until you’re sober and rested, and then make that kind of decision. Lessons for the kids!

The more we hear and read about the album, the more it sounds like it was built to be a mythic rock ’n’ roll record. However from the cover alone, you guys are still pretty much ordinary Joe rockers. Do you guys think image plays a hand in building a legend to a record?
Of course! As Jack White (an expert in the image/legend department) famously said, in reference to the White Stripes image, that someday “the only thing that’s going to be left is our records and photos.”

Japandroids is a portmanteau of 2 former name ideas. We’re kinda interested in the history of the 2 of ‘em. How did Japanese Scream and Pleasure Droids come to being? We’re guessing you’re big on sci-fi… or Real Dolls, maybe.
Yes, I am big on sci-fi. Who isn’t? As you may or may not know, the name Pleasure Droids is a reference to the pleasure androids in Blade Runner. As for Dave’s choice, the name Japanese Scream comes from a line in the song ‘The Bucket’ by Kings of Leon. It is from their record Aha Shake Heartbreak, which Dave was listening to a lot around the time we started the band.

Speaking of titles, we thought we were the only who disliked the name Celebration Rock, but while doing research we found out that you guys and the label hated it too. Who came up with it and have you guys learnt to like it now that everyone is loving the album?
I came up with the title Celebration Rock, and always liked it. It is true though; it was not a popular name when I first suggested it, and I received very little support for it in the beginning. Nevertheless, I was confident that it was not only the right name for the album, but the only name for the album, and thankfully I am very stubborn when I believe in something. Since then, most of said folks have either changed their mind, or at the least come to terms with the title, accepting it in no small part due to the same album’s success, as thankfully for all parties, our fans seem to almost unanimously love the title.

You studied science and has/had career in geology, Prowse attended lectures in anthropology, and you guys once described yourself as being not particularly creative people. But you have recorded 2 great albums. It seems like Japandroids is quite the self-effacing band, have your confidence increased now that success is a clear thing?
Confidence and self-effacement are not mutually exclusive. One can be very confident, while at the same time self-effacing (though Kanye West would surely argue this). We have a lot of confidence in ourselves and our band. You couldn’t possible exist within the sphere that we do if you didn’t. As far as any self-effacing tendencies are concerned, I would simply chalk it up to being Canadian, and as such the mannerisms instilled in us since birth.

On a similar note, just out of curiosity, does having background in scientific studies help you out creatively?
Not that I am aware of. In fact, had I been smarter and/or more ambitious when I was younger, I would have studied music, or fine arts, or literature, or journalism, or any one of a number of faculties of study that could have more directly aided in my own creativity.

Finally, will Prowse go to the Dark Side and maybe collaborate with Timbaland (like Chris Cornell) one day? What not with him sharing the same name as Darth Vader…
I agree with you. If Dave plays his cards right, he may very well just be the next Chris Cornell!

Japandroids is set to play at St. Jerome’s Laneway Festival 2013 this Saturday 26 January 2013 at The Meadow, Gardens by the Bay, Singapore.