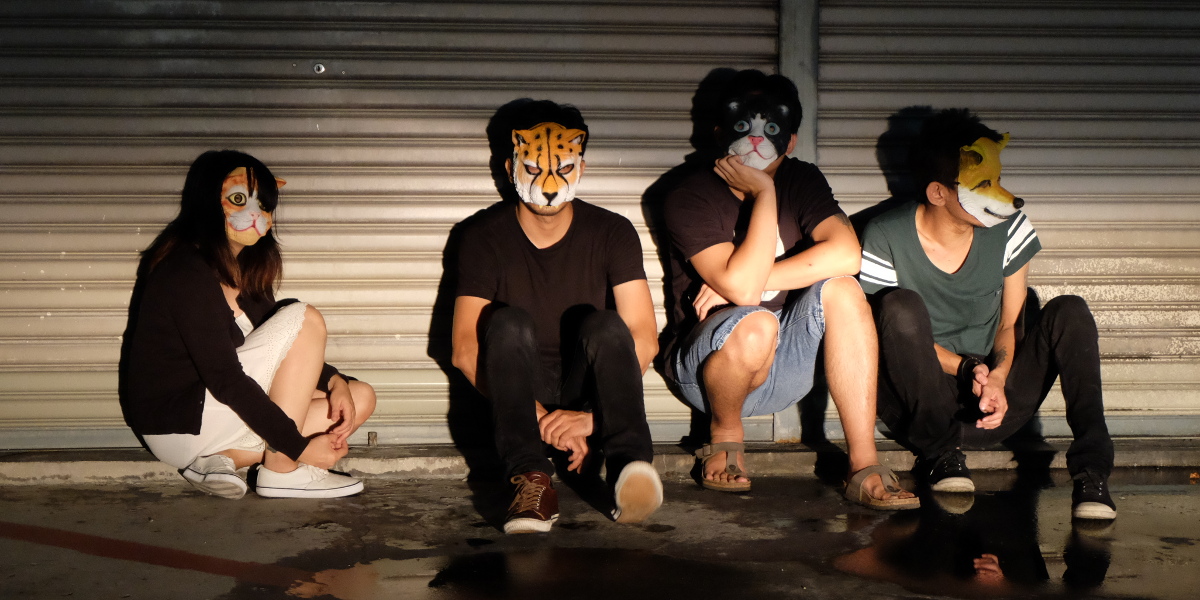 Two years ago, indie band Foxlore released a music video for their folk rock single ‘Devil Made Me’ – a monochromatic stop motion animation that intrigued us with its quality production and its fair resemblance to the visuals of Of Monsters and Men’s ‘Little Talk’. It’s taken them some time, but the band has finally released their debut album Release Me, My Ghost (RMMG), which they launched at Live Fact – the venue in which they recorded the songs live.

The recording process was an urgent one, as it was finished in a month with the instruments recorded in just a day. In the grander scheme of recording timelines, they are news of even more brief durations, but considering that nearly every song on the album is a collaborative effort between the band and their musician friends, the schedule sounds intense. Describing the period as “imbalance,” Troy (vocals, guitar) endured backlogged deadlines, Selene (vocals, bass, synths) only slept a couple of hours for a few weeks, and guitarist Affan took two days of medical leave.

Nevertheless, RMMG is a collection of songs, some from the archives, some new, that are reenergised with the help of their friends. “Surprisingly, the contributors threw in a lot of awesome things without conditions, so everything turned out quite smooth,” says Troy. Each song was sent to a specific musician in mind and the results were as such; the members of the experimental band Skits provided their skills on a number of songs, with bassist Eric serving as engineer and co-producer of the album; saxophonist Yong Yandsen’s interpretative prowess can be heard on the romantic ballad ‘Love’; and then there’s the swirling chaos of ‘C’mon’ with Brendan Teh of Skits on guitars.

The Americana essence of ‘Satellite Heart’ is furnished by folk musician Johann Sultan of The Cotton Field Scarecrowes as he duets with Troy, who jests, “When he sang on the song, I wanted to remove my vocals from it.” Thankfully, he didn’t. The harmony between the twang in Johann’s voice melding with Troy’s raspy tone is highly complementary, it sounds almost powerful. Selene’s backing vocals add an ethereal lightness to their dense neo-psychedelic, Britpop sensibilities, and her voice shines on ‘In The Rain’, where her role in the song calls to mind many dream pop songs of yore.

The synths on ‘A Better You’ was contributed by Skits’ Phang and Teng of instrumental rock band Nao. Monotribe maestro Silent Keat – or shoupihou – gives ‘Fever’ the electronica ebullience that bolsters its unhinged messaging. Album closer ‘Fix Love’ is supported by The Maharaja Commission’s Hwang on the synthesisers and a choir that consists of the owners of Live Fact – Mak and Shane.

The band’s sudden need to make RMMG is due to Troy and Selene’s imminent migration to Australia. “The album serves as a memory. We want to leave some marks before we leave, and we’ve known each other for so long.” Between them and their long time friend Affan, their friendship spans over ten years. When asked if the making of the album was bittersweet, Affan states, “Yeah, a bit, but life goes on.” Troy, in his dry tone, shares, “Things might turn ugly, things might turn better – nobody knows (laughs). But, this looks like the right time.” Selene, on the other hand, answers with a tinge of worry, “Yes, there are so many things I can’t leave behind, especially the music. And God knows what would happen when we move to Australia, it’s just the two of us – it’s a bit scary. But, I think nothing is impossible.”

Although Joe, the fourth drummer to join the lineup, is new to the band, he’s spoken of highly by his bandmates. He’d only joined them during Foxlore’s few David Bowie tributes around town, but he quickly learnt the band’s repertoire of songs in two months. Among the seven songs on the album, Joe managed to work exclusively with the band on the song ‘Resurrect’. Some of the songs are two and a half years old and that’s the reasoning behind the name of the album. “We are the ghosts who took too long to release the album, that’s why we named the album Release Me, My Ghost.”

It’s certainly been a long time coming for Foxlore who started with the dark folk outfit Weaker that never really left the compounds of the internet. The songs were folkish, doomish, and frankly depressing – “It’s all about suicide,” Troy says laughingly, “we had an album called Songs for a Dead Lover!” With boredom and gloom surpassing the music itself, Foxlore came to be thereafter as they distanced themselves away from folk songs. The band experimented with their sound and naturally ventured into the Britpop sound they’ve grown up with, as they cite the likes of The Verve, The Stone Roses, and Blur as inspiration, along with Joe’s aspiration for Pink Floyd’s Nick Mason.

“Can we not call ourselves musicians? We’re just people who are passionate about music.”

Foxlore will soon enter an indeterminate hiatus and it’s clear they’re grateful for the contributions of their friends on the album, especially to Live Fact’s Mak, Shane, and Hwang. Yet, with the album finally produced, the band is uncomfortable with labelling themselves as musicians, as they say, “Can we not call ourselves musicians? We’re just people who are passionate about music.”

Release Me, My Ghost can be purchased via the band’s Facebook shop.