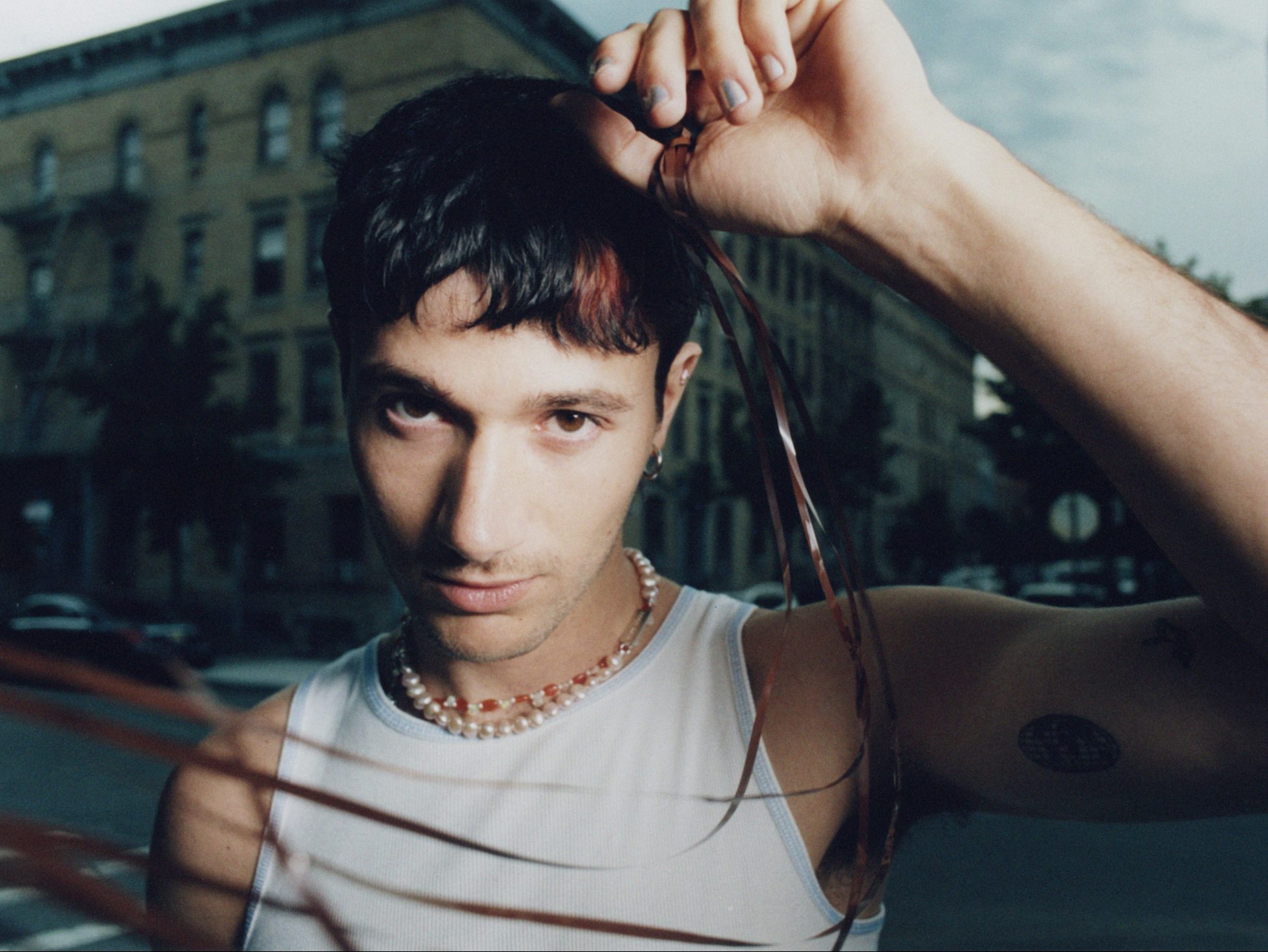 You’ve probably heard of this softboy by now. American singer-songwriter Jeremy Scott Zucker, best known for his songs ‘all the kids are depressed’ and ‘comethru’, has met with commercial success and garnered millions of streams across SoundCloud and Spotify.

Word on the street is that he’s about to take on a more pop-punk approach with his new upcoming album, CRUSHER. And his latest single ‘Therapist’ only gives us a peek into what’s more to come.

JUICE recently had the pleasure of interviewing the 25-year-old talent, and here’s what he had to say about making music during a pandemic, mental health, and evolving as an artist.

Well first off, we’re really excited to get to know you, especially after your latest single ‘Cry With You’. Personally I found it really comforting, yet heartbreaking at the same time. Can you explain how this song came about?
So it’s one of the more specific stories that came together with a song that I’ve ever experienced. But basically, I was on the East Coast, making music with a couple of friends, and my friend Lauren was living on the West Coast in California. She was going through a really tough time and it was sort of this really long, ongoing thing. And she would call me every once in a while to vent and I would hear her out and try to take her mind off things and cheer her up and just try to be there for her. But it was really hard to do from such a distance, and through a phone.

There was a certain point where I just felt like I didn’t know what to do. And so I said to her, “If I can’t be there with you physically, I guess all I can do is cry with you.” And she was immediately like, “You should make that a song.” And I was like, okay I will. And then I said bye and wrote the song.

Is that going to give us a good peek into what CRUSHER is going to be about and what we’re going to feel?
‘Sort of, Cry With You’ is definitely on the sadder side of things. And it’s also very reminiscent of my older music. I would say the rest of the album is like a solid mix of the previous three singles, if that makes sense. So it’s a little bit melancholy, but definitely a lot of energy and introspection, and there’s just a lot more uplifting feelings and a lot more confidence from me, as a vocalist, lyricist, and a producer.

You mentioned before that you became yourself more than ever, more raw and confident. Can you talk about that and what the importance is in evolving as an artist?
I think life isn’t a straight shot to getting better and becoming a better person. It’s full of ebbs and flows and I think the important thing is knowing that no matter the ups and downs, you’re heading in the right direction. It was sort of a realisation that I wouldn’t be where I am right now, without these low moments, and I was sort of embracing all of the things before that I used to feel afraid of or ashamed of.

I thought a lot during that time, and I felt a little lost after my previous album. It took me a while to figure out who I was and what I stood for, because you know, especially with relationships, going through a breakup and going through a crazy situation, it’s really easy to lose yourself when you have really strong feelings. So yeah, CRUSHER is sort of like, finding myself again.

I always want to be making new things, and if I’m using the same chords using the same sounds using similar lyrics, or phrasings,  it’s like, “I miss the old Kanye,” (chuckles) like if Kanye made another one of his classic albums, that second one wouldn’t be a classic album. I need to be myself in my music and doing things differently is my way of doing that. And it makes it that much more fun and exciting and satisfying for everyone.

How did you get that much inspiration to write music during a pandemic?
Really great question, it was really hard at first. There were four or five months where I couldn’t really write anything that felt like a step forward. Everything was like I was sort of in the same place. And I kept making songs, and I would send them to my friends in my team. And they’d be like, “This sounds like it belongs on Love Is Not Dying. And I was like, “Yeah, that’s not what I’m trying to do,” because I just don’t think it’s fun to make the same album over and over again.

A lot of it came from introspection, and spending a lot of time with myself and learning more about myself and also starting to prioritise connections and friendships when you don’t get to really see people. I didn’t experience that many new things, but I think that’s why it’s coming across as more mature, because I’ve spent more time marinating, analysing and learning from things instead of writing about them right after they happen when the motions are really raw.

Going back to what you said about prioritising connections during a pandemic, do you have any tips on how we could focus on the relationships that we have, or what you’d like to share based on your experience?
I don’t totally feel like I’m in a position to give advice on this, but it’s just something that I’ve been working on. You know, I like to think the reason we’re all here is connection, and relationships and friendships. You know, happiness is only real when it’s shared. And yeah, with having music as a career, there are just so many different things to stay on top of, and it gets a little isolating from friends because you’re on a completely different schedule than everyone else. So I have to really make a conscious effort to keep in touch with people. Just call your friends. That’s my only piece of advice.

You’ve been referencing in other interviews about being previously lied to or manipulated. Is CRUSHER perhaps, a revenge story?
(Claps) Nice, nice. Yeah, I’ve been dropping little hints here and there in interviews about what ‘Love Is Not Dying’ was exactly about and you’re sort of the first person to hit the nail on the head. Thanks for bringing that up, Quinny.

I’m writing about the same situation on this album, after having a couple months to sit down and digest. In Love Is Not Dying, I was very sympathetic and empathetic. And I was sort of losing myself. And like, “Why do I feel this way? Why has this impacted me so negatively?”

CRUSHER is sort of the realisation that I wasn’t treated well, I was very blatantly mistreated. There’s a lot of anger on the project because of that. The first handful of songs I wrote were just really, I hate to say mean, but music is emotion, right? Like, I wasn’t writing the songs to get revenge. It’s not really a revenge album. It’s an expression of anger, and it’s not designed or intended to hurt anyone. But it is designed as a medium for me to express my anger. And once I really got it out during the first half of the album, I just felt more like I processed the emotion that I needed to get through and things came across a bit lighter, and easier.

What was the whole collaborative process like with Keshi and how did your musical differences synchronise?
I had so much fun working with Keshi. It was unbelievable, I really loved working with him. I have been working on this album for so long and it really started coming together in the past month. I literally finished it like two weeks ago. But I had no features on any songs. And if I’m bringing on an artist that I’ve never worked with before, I have to sort of finish the song before I bring them in because I don’t know how we’re going to work together. And I like to take what they do and incorporate it into my songs in a way that I feel fits.

So I finished the album and I was like, okay, I’m gonna get all these features on it. And I sat down and the only song that really needed someone was Sociopath. And I had been talking to Keshi on and off, I was just a big fan of his stuff. And I messaged him, “Do you wanna do something?” And he’s like, “Hell yeah, let’s do it. I’m in LA for a week.”

From there I finished the song in a week and sent it to him. He sent back some really awesome stuff, vocals and some drums. I messed with it a little and mastered the production, and it was just a perfect way to tie it all together. It turned out awesome and the song was finished, then we hung out and it was really great.

With the increased volume of the album, linking back to your feelings of being crushed, would you say that people need to be louder in the music industry to be heard over all the noise?
That’s a very interesting question. I don’t like the idea of competing for noise or for attention. The industry is very saturated, and everyone feels like they have to make a lot of noise to get noticed, and I really tried to not do that. That’s not really my motivation for more noise and for all the energy in the volume.

I think it’s just self expression. I just want to be loud right now. But I don’t believe in the rat race mentality where everyone’s trying to scream over each other because, what are you even saying at that point? So yeah, when everyone’s screaming, you have to whisper to make everyone listen to you.

What inspired the visuals for the CRUSHER trailer and visuals?
I just wanted to strip it all away and make it really simple and minimal looking. We have the CRUSHER logo on the little truck, sort of symbolising a lot of what the album’s gonna be like visually. And then those massive speakers, just sort of showing how the volume and the intensity is gonna be.

And it’s funny, my mom sent me a text message when that came out. And she was like, the little boy reminds me of you. Which was weird cause I actually don’t really like when people put a kid in their videos as a younger version of them. It’s obviously like not not, you know? Yeah, it’s not supposed to be me. It’s more about the truck. The boy gets called and runs away and then the truck is there. It’s more like, why is there a kid sitting in the middle of this room? Like, what’s the point of this? I don’t know, I guess more details will be revealed in the songs.

Mark your calendars for a listening party, cause CRUSHER is dropping on 1st October! Pre-save the album here.

INTERVIEW: CHVRCHES On Life During The Pandemic, M’sian Food & Working With The Cure’s Robert Smith