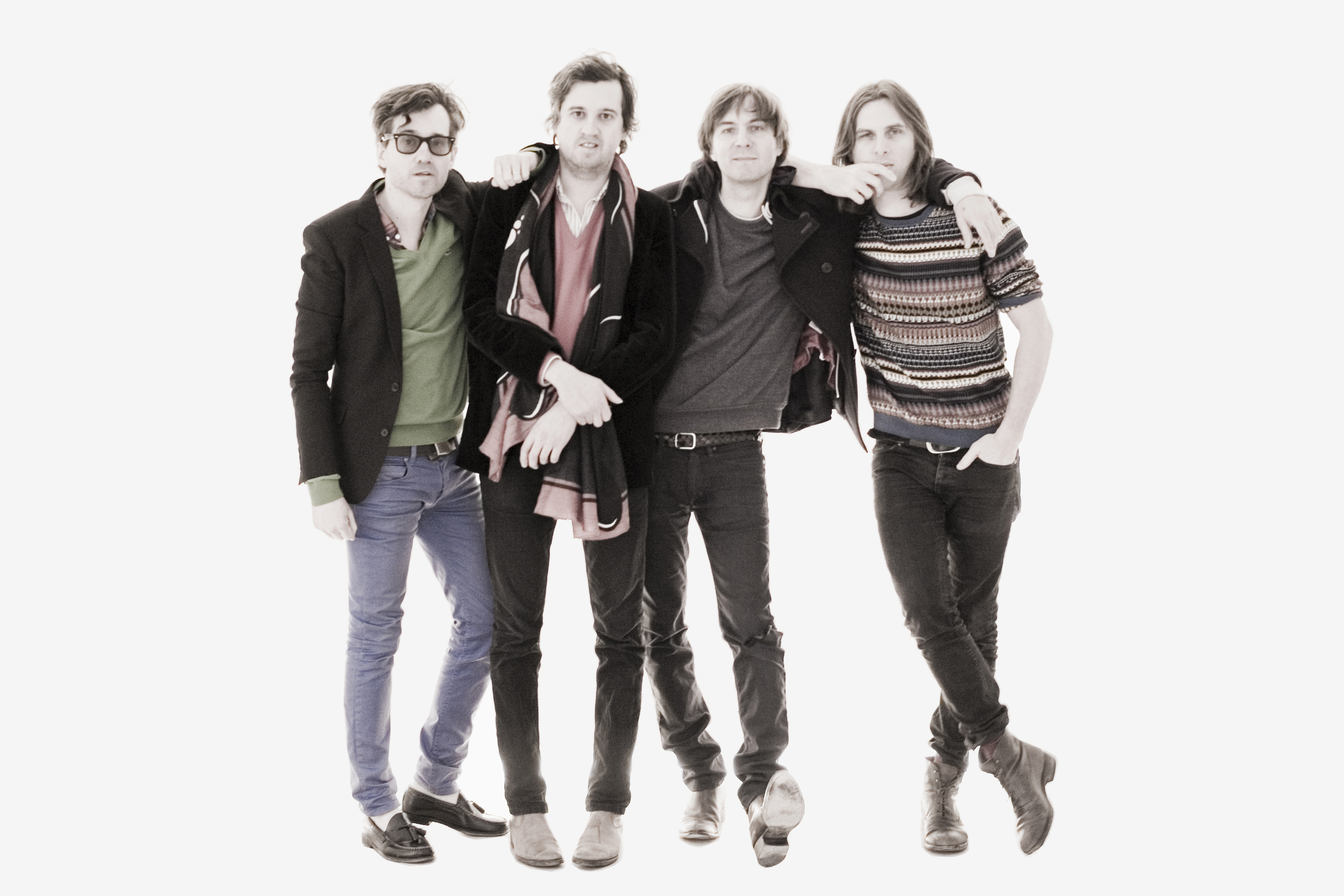 Good Vibes Festival 2017‘s lineup certainly makes the festival live up to its name this year. With a slew of brilliant international headliners, as well as the cream of the crop when it comes to local acts, Good Vibes Festival is definitely going to be a weekend of music that you won’t want to miss. Need a little more of an introduction to the best acts in the lineup? Don’t worry, we’ve got you covered. We’ve chosen the ten acts from the lineup that we’re getting the best vibes from – we’re sure that by the time you’re done tasting these sweet tracks, you’ll be excited as we are about seeing them in concert.

There is no way you wouldn’t have heard of these guys if you were a ‘00s indie kid. Their debut album Inside In/Inside Out spawned runaway hit singles ‘Naive’ (which has played in just about every bar, football stadium, alternative club, and clothing store since 2006) and ‘She Moves in Her Own Way’. Both tracks hark back to the golden days of indie rock, back when guitars had a spring in their step and life was much simpler. Catching their set at Good Vibes will undoubtedly be the sweetest throwback you ever experience this year.

Perhaps one of the most well-lauded indie rock bands to come out of Europe in the past decade, Phoenix have been a staple in the scene basically since it started up. The French four-piece have certainly grown as they’ve moved through the years too – their output now consists of a thorough exploration of pop, rock, and even electronica, though each album has remained just as danceable. Their most recent release, Ti Amo, sees frontman Thomas Mars remaining as enigmatic as ever with his lyrics, taking listeners on a journey round the world from “being a bad cop sunbathing in Rio” to the neon-drenched discos of Italy. Their set at Good Vibes Festival will surely incorporate both their newer material, as well as unforgettable hits like ‘1901’ and ‘If I Ever Feel Better’. Be sure to catch them play for a journey through indie music like never before heard.

An up-and-coming pop princess, Dua Lipa has been making waves all over the world for her infectious brand of pop, her powerful, reverberating alto voice, and the fact that she is just ‘Hotter Than Hell’ (pun intended). Her debut album only dropped in June, but she’s been making waves since she first appeared on the scene; garnering a BBC Sound of 2016 nomination, along with a BRITs Critics’ Choice tip, and an NME Award for Best New Artist. With her debut album reaching the Top 5 on the UK Albums Chart in its first week of release, magazines commissioning documentaries about her, and her increasing number of collaborations with stars like Miguel and Martin Garrix, it’s probably a good idea to catch Dua live in concert just as her star is ascending on its meteoric rise.

We can’t get enough of the local scene’s most FIRE rapper right now. Sure, SoundCloud rappers are popping up like mushrooms all over the world, and we all know at least two people who want you to check out their mixtape, but Airliftz’s new EP, Bagel, is actually in the running for one of the hottest new releases this year. On Bagel, the nineteen-year-old rapper recounts all manner of relatable topics, from the innocence of a first crush, to the inner workings of an introvert who sees going out as a chore instead of a relief. Looking for new faces in rap to listen to? Be there for Airliftz’s set, and you won’t even remember who else you came to see at Good Vibes Festival.

Are you one of those people who constantly thinks about how pop culture was better in the ‘80s, and wanted your life to be a little like those vintage romcoms and John Hughes classics that your parents used to watch? Ever wished your dose of indie pop could be a little more sociopolitically aware? Shura has got it all. The London-based singer-songwriter went from making minimalistic pop tracks in her dorm room while studying at University College London to blowing up the live circuit with her energetic showmanship and undying cheerfulness. Add in LGBT+ positivity and support to the lyrics; throw in a good amount of nostalgic lyricism that will make you feel exactly like a character on a high school teen drama, and you’ve got what might just be one of the most fun sets to witness at Good Vibes Festival.

In case you didn’t know, Malaysia has a homegrown answer to indie pop singers like Halsey and Melanie Martinez, resting in the capable hands of 21-year-old Talitha Tan, an athlete and singer-songwriter. Her music treads the line between pop and folk music beautifully, resulting in some heart-rending ballads that are as bitter as they are sweet. Be sure to catch her set for an evening of mellow, warm vocals; gentle acoustic guitars, and hints of radio-friendly pop beats.

Norwegian producer, beatmaker, and multi-instrumentalist Peder Losnegård aka Lido is one hell of a talented dude. Having first started out as a drummer, he eventually transitioned into rapping under the name Li’l P and made a household name for himself in the Norwegian music circuit, before finally evolving into a fully-fledged producer who found international fame with his own personal take on chillwave, EDM, and indie pop. In a previous chat we had with Lido, he promised a performance full of emotion, crazy vibes, and him flitting about on stage from instrument to instrument as he orchestrates the best live set you’ll ever see this year. What other reason do you need to catch his set?

Now, for an artiste that’s more downtempo – look no further than Malaysia’s own homegrown r’n’b prodigy, alextbh. If you’ve ever been in love, the 20-year-old r’n’b producer’s smooth, sexy sounds will be sure to resonate with you, whether or not that romance turned out wrong or right. It makes sense, too, that music coming from a fellow millennial would be a fitting soundtrack for your summer. From doing covers of equally lovelorn bands like Cigarettes After Sex, to putting out his own, more personal content to “capitalise on his own heartbreak,” alextbh is the perfect act to start your evening with as you look back on bittersweet memories with a lover, past, or present. Who knows – you may even find yourself along the way.

It may come as a surprise that Kodaline initially had no plans to follow up their fantastic debut album In A Perfect World at all. But after the four-piece from Ireland challenged themselves to think outside the box and reinvent their sound, their second album Coming Up For Air seemed to almost write itself, and was completed within eight weeks. Now, with new single ‘Brother’ already on the airwaves, Kodaline’s third album seems just inches away from being announced, and the band are riding a wave of creativity that shows no signs of stopping any time soon. If you’re a die-hard Kodaline fan, you’ll probably already have plans to check out their set, and to catch a sneak live preview of their new material before you hear the studio versions on the upcoming album. If this is your first listen to them, and honest, low-key indie folk music is your thing, you won’t want to miss them either.

Chances are that this duo from London had something to do with one of your favourite summer hits from the past few years. Churning out bangers like ‘All My Friends’ and ‘Don’t Leave’ seems be second nature for Snakehips, who have put out two EPs and a slew of hit singles and still show no signs of stopping any time soon. Catching their set will undoubtedly result in you dancing the night away – with head-bopping left-field electronic tracks, blistering rap bangers, and even a tinge of soulful r’n’b.

Want more dirt on the Good Vibes lineup? Check out our interview with Lido, and our previous coverage of Airliftz.

Keen on going without spending a cent? Join our contest.