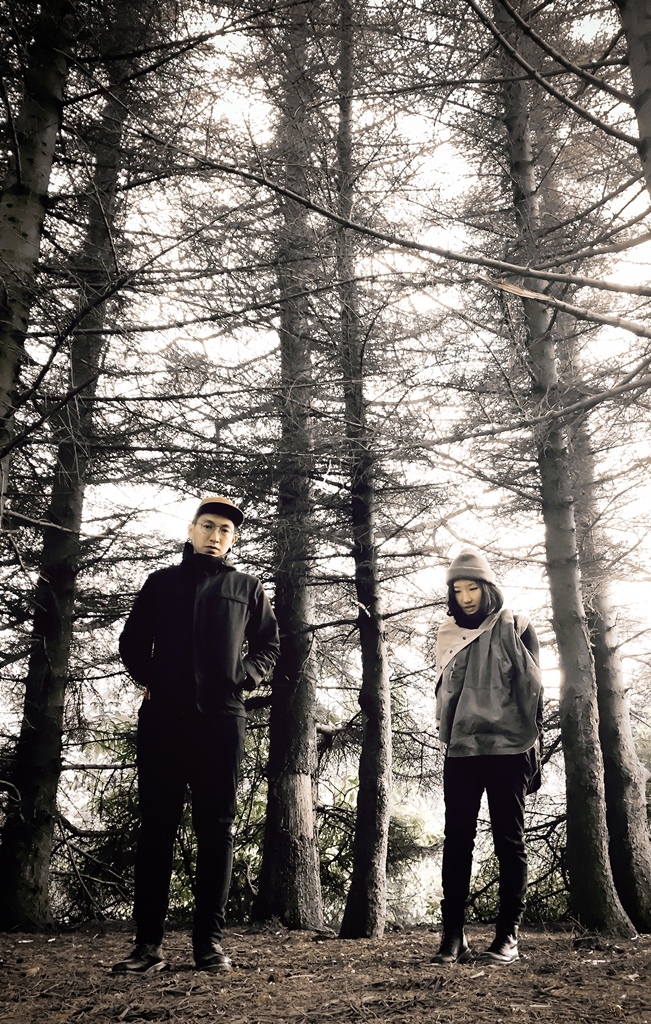 .gif has always been on our radar ever since we saw them perform at Laneway Festival Singapore earlier this year. Two years after the release of their EP saudade, the duo finally dropped their first full-length album soma, continuing to demonstrate their deft lyricism and a musicality that has grown to accommodate the weight of the sombre subject matter. Despite being on tour, .gif managed to answer JUICE’s questions regarding soma; such as dissecting the theme of the album, understanding the characters who inspired them, Weish’s first attempt at rapping, and their literary influences.

Between the release of the saudade EP in 2013 and a full-length album now, how has the band grown individually since then?
Din Well, we’re both slightly more technically adept with our equipment, so we managed to do a lot more for this album.
Weish We’re also older, of course, with more responsibilities… we’ve got day jobs that can get really draining and stressful, so it’s been harder to juggle doing what we love and doing what we have to. I think that comes through on the album too.

How was the process of writing and producing soma with all that responsibilities getting in the way?
D Well, this has been in the works for a really, really long time. I mean, we finished some of the songs ages ago, but never really got down to recording them, so we’ve been performing songs like ‘blanche’ and ‘godspeed’ live for a number of shows. In terms of process, we’d record everything at home and send rough demos to our producer Jason, who’d clean up the mix and offer us creative input.

Can you guys explain a bit about the cover art of the album?
W Our artist, Marc Gabriel Loh, was first telling us that he’d always found this strange duality in our music — to him it sounded retro, yet futuristic, eerily familiar yet foreign, evoking a feeling that was intimate, yet distanced. So with the girl on the cover, Marc references those old-school Chinese album covers, but sets the scene in space to convey that opposition. Also, our album being largely about alienation, entrapment… the art expresses and informs those themes, too. There are characters who estrange themselves, try to rise above and “beat the system,” only to find themselves trapped by bigger, predetermined cycles. Marc’s work encapsulates that for me; that alienation of vast outer space as the girl has risen far beyond Earth, yet she remains constricted by a room with closed windows, by the bubble around her head.

There is a general theme of ennui and the dissatisfaction derived from working and earning a living, why did you guys choose to tell these messages with soma?
D Not so much from working and earning a living, but just a general sense of ennui I guess.
W Like Din says, I think we’re just reflecting an ennui that pervades most of modern life, modern lit, film, etc. In my own lyrics though, I can’t deny that they’ve been inadvertently shaped by my own hardships, and the struggles of my friends and family around me. Once in a while amidst the madness of the urban rat race, we have a moment of clarity — but in that clarity, [there’s] no revelation or respite other than the oppressive weight of nothingness, of not having purpose or finding meaning. That bugs the hell out of me, but fascinates me in some surreal way (laughs). I guess that’s why I (and Din, too) am an ardent fan of Beckett, Camus, etc.

Having studied literature in university, did you all see the songwriting process as a way of asserting your literary aspirations?
D Well, I didn’t (and don’t) really have any literary aspirations per se. Neither did I have any musical aspirations. Everything just started happening; one song led to another which led to a show which led to more shows which eventually culminated in soma. There was no grand master plan or end goal (and there still isn’t).
W Same. I don’t think we ever see ourselves as ‘writers’. But of course, being forced to read widely and beyond our own literary tastes really enriched our perspectives a lot. 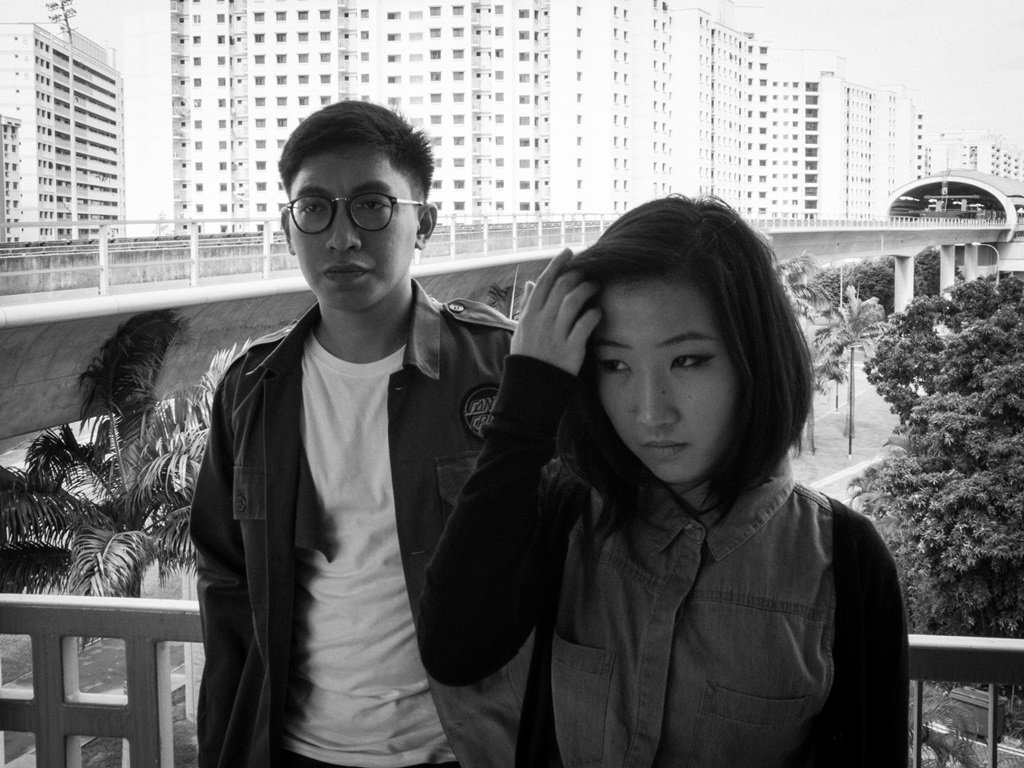 Ah Gu, Blanche Dubois, and Jay Gatsby are some of the characters whose stories the band has referred to for inspiration. Why are their stories so resonant for you both?
W Funny enough, we didn’t set out to compile characters that fit this mould… it was only after we’d been performing these songs for awhile that it dawned on us of their uncanny similarity. These are all dramatic, larger-than-life characters who are not the hero/heroine that the reader automatically empathises with. Ah Gu, from Singaporean film Eating Air, is an obnoxious, overly gung-ho biker who thinks he is invincible and takes huge risks; he is eventually a victim of gang violence and exits the story fragile, frail — his survival is unclear. Blanche, from the play A Streetcar Named Desire, is harder to explain… I won’t bore with too much context, but it suffices to know that she, too, has grandiose delusions of self that she actively perpetuates. At the end, she is told the man of her dreams has arrived to whisk her away to the ocean, when she is actually being sent to an asylum by her sister Stella. Jay Gatsby, as more people may be familiar with, meticulously constructed his entire life and persona to get the girl of his dreams, and is not only rejected but dies an arbitrary death from a silly, evitable misunderstanding.

Subconsciously, we tend to identify most strongly with these types of characters… I guess we are all people who try to rise above, to be bigger than society, to mean something greater. But at the end of the day the system always wins… institutional procedures will outlast you, and your grand perspective is trapped in your own head.

Seeing the success of ‘godspeed’ (being featured on THUMP and all), do you think .gif has become this ‘bright beacon’ that alleviates some of the personal feelings of ennui?
D I don’t think there’ll ever be any ‘alleviating’ of the ennui? But I guess it’s somewhat comforting to know that you’re not the only one who feels a certain way.
W Oh, we’re super grateful for that! We have wonderful friends to hang out with, gigs to organise and attend all the time that keep us occupied and happy. The ennui… I guess it’s separate, it’s bigger than all that, see question four (laughs).

The featured artistes on the album such as Mean, Tim De Cotta, and Isa Ong, all come from different musical backgrounds — rap, r’n’b, and indie rock respectively. How did the collaborations come about?
D We were blown away by Mean’s track ‘Fabric’ when we first heard it, and we knew that we wanted him on the upcoming record. As for Tim and Isa, they’re both friends and we thought that it’d be fun to have them on board.

Weish, we loved ‘money’ and your rapping on it. Was that your first time attempting it?
W Oh yes, it was. The rapping itself isn’t the challenge, I grew up memorising Eminem’s entire discography and rapping in the shower (laughs). But writing a rap — holy crap. That’s hard. Getting all the internal rhyme to work, avoiding cheesy end-rhymes, strategically placing the stressed and unstressed syllables to give it a natural flow… It’s the hardest thing I’ve ever had to write.

Why did you guys rerecord ‘juvenile’?
W Our only recording of it was specifically for Baybeats, for a music video they wanted to produce, in collaboration with film students of Lasalle.
D So we had to rerecord it to better fit with the rest of this album.

You guys are a part of DUNCE. — a collective that stands for a similar principle as what is told on soma — why is redefining your country’s “stiff notions of success and happiness” important to you guys?
W As privileged as many of us are, growing up in a city like Singapore… we find that most kids have hardly any time to breathe, to feel or experience art in a genuine, non-formulaic way. Statistics are on the rise for kids who kill or hurt themselves from bad grades. Art, to me, connects all of human experience and it is the greatest comfort in our world of ennui and unattainable aspirations. So in DUNCE., we just want to make art and support young artists, in whatever way we can.