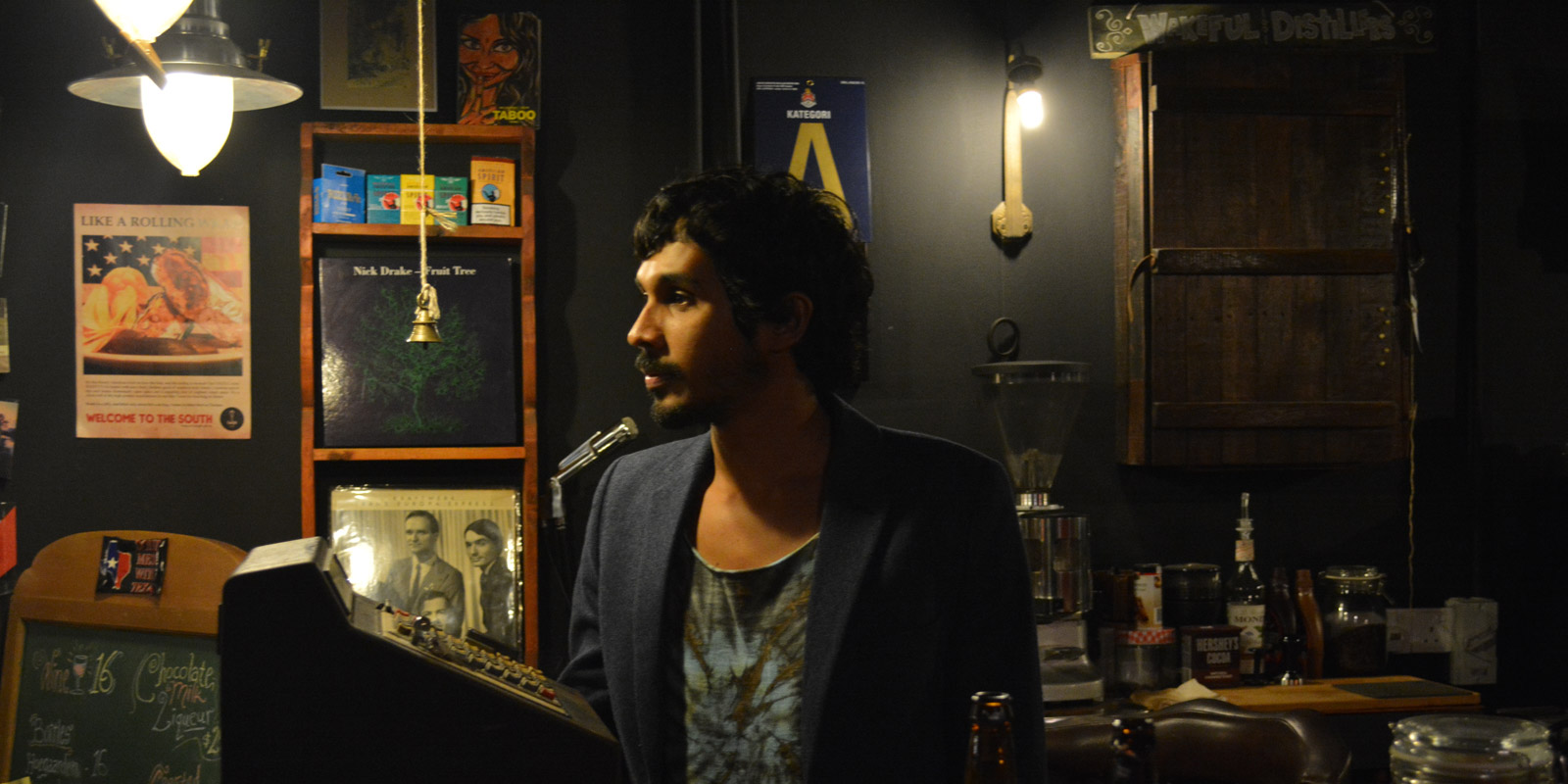 Shop
Gaslight Café & Music
A Hole in the Wall

If you’re an ardent acolyte of folk music and beatnik writers, or alternatively, you simply like to educate yourself with American cultural history – particularly regarding folk and the Beat generation – you would have heard of Gaslight Café. Located in MacDougal Street, New York, the original café was a haunt for the likes of Bob Dylan and many other venerable music, art, and literary figures of ‘60s Americana. Most recently, the original Gaslight Café was even featured in the Coen Brothers’ Inside Llewyn Davis, which was about a struggling folk singer played by Oscar Isaac. And if you noticed the small poster on the lamppost outside the cafe, it wishfully advertised that both Bob Dylan and Dave Van Ronk (the inspiration for Llewyn Davis) are performing inside the premises.

Owner Johann Sultan managed to pay the site of the original coffeehouse a visit – the actual café was closed off, one can only take photographs of the descending stairs that led to the well-storied venue where many musicians had performed at the same steps. With the knowledge he’s amassed about the original café and its history, his aim for his own Gaslight Café is not a gimmicky replication of the original, instead he merely takes inspiration from the period, which can be seen in the paraphernalia and tokens that decorate his café. There are purchasable records from artistes such as Ella Fitzgerald, Nick Drake, and Miles Davis as well as releases by local acts. There is a section dedicated to folk instruments (banjo, washboard), and by the entrance, you can read the history of the café that inspired it all hung in frames on the brick red wall.

Before opening in June of last year, it took Johann eight months to collect the vintage items from eBay, junkyards, and from out of state merchants. Another four months was utilised for renovation and Johann’s carpentry as he built many of the well-crafted cabinets on his own. Once a month, there is a poetry event, which receives a lot of attention, as well as a stand-up comedy show. Music performances, of course, are indubitably part of the café’s identity — as it is in Johann’s life too, whom you may have known via his sibling duo The Cotton Field Scarecrowes.

After more than a decade working in advertising, Johann decided it was time to start something of his own. Although opening a café wasn’t a dream of his, still, he managed to incorporate his keen interests into the business. He operates the café on his own, aside from a few friends who would help him if need be. Additionally, he likes to call Gaslight Café “a hole in the wall” rather than a ‘speakeasy café’ even though some have referred to it as such. JUICE spoke to Johann to discover when he was first introduced to folk music, creating his version of the original Gaslight Café, and what’s going on with his band The Cotton Field Scarecrowes.

When did the interest in folk music and its culture start to burgeon in you?
The process of growing up – partly childhood and during high school/college days. As a child, I was surrounded by music at all times, be it from my family’s record collection, influences from books, magazines, or my own imagination of how the land on the other side (America) would be simply through the sound of the music and words. Back then, it was just school, home, and music for me. I was a hermit. Music, toys, and arts – seen from old books and paintings – were my escape.

Why did you choose to open the café at Plaza Damansara? Did the space remind you of the original café?
No, the space is never like the original! The original was a basement in New York. The real estate guy took me here and showed me the place and I said, “Yeah! This Is It!” The place was clean, good in size, and [situated] in a nice area. So, why not?

How much of a hand did you have in conceiving the café? You mentioned in the BFM interview that you designed and even built some of pieces for the café.
I would say 60% was me, 25% by the contractor (for wiring, plumbing, partitions), and 15% was help from good friends. Yes, almost all of the woodworks were crafted and made by me during the process of building the space, except for some of the furniture (tables, chairs, benches, stools) that I bought from a second-hand warehouse. Vintage items and all of the antiques were from my ‘picking’ collection [that was accumulated] eight months before I settled for the unit at Plaza Damansara.

The operational hour for the café is relatively late – from 5pm to 1am. Have you found that the community of people you cater to patronise the café during these hours?
First of all, it is not a full-fledged restaurant or bar just yet. Currently, it’s operating more as a daily art space to host events in a ‘speakeasy’ coffee bar environment. A minimal menu will be up in the near future. It’s definitely in the pipeline. And why the timing? It’s because I don’t have any reason to be there during the day when people are busy working. You’re right – it’s for the night crowd for now.

You wanted to recreate the Americana ambiance that was cultivated in the original Gaslight Café, but was it difficult to seek out musicians, poets, writers, and artists who you thought would bring a similar culture to the café as you envisioned?
No, the ambiance is never the same as the original Gaslight Café. This is my own version of it with the intention to always give the living experience to the scene – like a fantasy almost. Yes, it is definitely difficult to find them, although there are some movement here in the community that is growing bigger. So, it’s a good thing.

The local music scene is not the most flourishing one out there and there is an even smaller pool of folk musicians and fans. Were you ever concerned that opening a café that champions this genre of music was a bit of a risk?
Yes, absolutely. [It is a] risk! We don’t have fifty Bob Dylans here, but there are a few great acts here. Some are fresh, some are established. So yeah, we still get to see a mix here in our scene but I’m always open to many forms, instead of just one angle. Right now, the café is there to host and carry many types of events, from folk singers and jazz outfits to poets and comedians. We are also open for hall bookings (private functions, video shoots, and workshops). So yeah, many things have happened here. It’s all for the cause.

Do you find yourself surprised by the patrons’ level of fascination for folk music and the Beat movement?
I wasn’t expecting that at first, but yeah, I’ve gotten to meet them. So, it’s awesome!

What’s happening with your band The Cotton Field Scarecrowes? Do you still play every Friday at the café?
No, we don’t do Fridays no more. We are taking a short break at the moment to sort out our new materials and recording.

New album in the works, huh?
Yes, we are now trying to put things together for the upcoming album, which we don’t know when it’ll be out yet. But we’re definitely working on it! Hope all will be well.