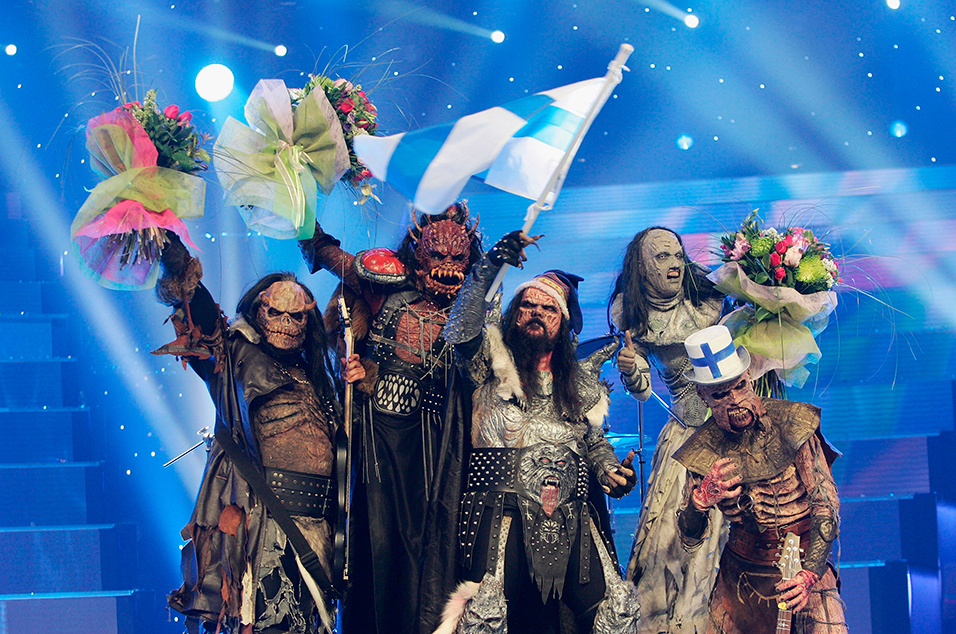 Alright, so Eurovision‘s competitors may not solely consist of countries in the European Union, but the vast majority of European countries are in it, and let’s face it – nobody can really tell what’s going on in the Europe at the moment. From Britain’s huge kerfuffle over Brexit to the ongoing troubles in its Eastern bloc, Europe is beginning to seem less like a united continent and more like a big sprawling mass of countries all struggling to assert their dominance over each other to no real avail. Eurovision certainly does reflect this, too – although it is a lot friendlier-spirited, and does not involve any sociopolitical machinations that plaster themselves all over the newspaper every day. While you may know Eurovision best for the obscene number of forgettable budget-Adele power ballads it has spawned (or may simply not know it at all), the competition has also been home to some of the most mind-boggling performances ever to grace live television. And, unlike the actual political mess in Europe at the minute, this stuff is actually funny – so sit back, relax, and enjoy the mess.

In 2008, Ireland was represented by a puppet turkey.

If you’re Irish, you’ll know Dustin the Turkey as one of Ireland’s funniest and most subversive TV presenters. If you’re not Irish, I’ll fill you in – Dustin the Turkey is exactly what the name says he is. A turkey and a puppet, Dustin appeared on Eurovision in 2008 in the hopes of restoring Ireland to its former glory (the country still holds the most Eurovision wins in history, but has not won since 1996). His entry, ‘Irlande Douze Pointe’ (‘Twelve Points to Ireland’ in French), was a half-shouted, half-cawed satirical look at the competition itself – perhaps the second best moment of hyper-awareness in the entire history of Eurovision. Unfortunately, Dustin the Turkey did not bring Ireland to gold, and was even booed at the end. I guess we only realise what true art is in retrospect.

Poland’s entry in 2014 was basically a major pisstake of themselves.

A close friend of mine is Polish, and even she has no idea why this song was made or how it was even approved. Boasting busty milkmaids, multiple sexual innuendos that are nowhere near subtle, and a hilarious look at the overused stereotype of the ‘sexy Slavic girl’, Poland were in it to win it in 2014. Although they finished in 14th place (out of 26 countries in the grand final), they did get a whopping 10 points from Germany, and to this day ‘My Słowianie’ is That One Eurovision Entry that anyone remotely familiar with the competition still talks about. Don’t say I didn’t warn you – one watch, and this bad boy (or should I say, bad girl?) will sear itself into the back of your brain in no time.

Forget boybands and sultry songstresses. Eurovision reached its true peak when Finnish hardcore band Lordi made it to the grand final of a competition otherwise dominated by adolescent Justin Bieber wannabes and divas who wished they were Adele. The band even stuck to their roots in rock, appearing onstage clad in every metal band’s Sunday best – that is, grotesque costumes and intimidating masks. Seeing as Lordi were pretty much unlike anyone else competing that year, let alone in the last twenty or thirty years of the competition, they won the hearts of judges and televoters alike, and took home the first place trophy with a record 292 points at the time. No other act that has been on Eurovision since has been this hardcore, and this fun too. Make Eurovision Metal Again? Now that’s a slogan I can get behind.

Everyone was thirsty for Holland’s competitor in 2016 – and boy, did he know it.

There is really something to be said for Douwe Bob. While most heartthrobs are content to let their screaming fans speak for their good looks and remain smugly modest while performing, this Dutch singer was clearly going for gold, and would stop at nothing to sway the televoters in his favour. While prancing around onstage playing at being some kind of strange cross between Beck and Bruce Springsteen, his eyes never once left the multiple cameras trained on him at every angle. Bob’s performance eventually began to feel less like he was being filmed for your entertainment, and more like he was watching you for his entertainment. As if that didn’t already take the cake, he even stopped halfway through his song for 10 seconds, for no reason whatsoever, to just smile into the camera breathlessly and mouth “I love you” as hordes of swooning Eurovision viewers shrieked and clutched at their country’s flags. Talk about using what your mama gave you.

Never has there been a performance more bonkers than Estonia’s in 2008.

Ever wanted to see some pudgy men hump a piano while scantily-clad dancers wave around random pictures of food? Yes? Well, now you can! No? Well… now you should! Estonian trio Kreisiraadio (literally meaning ‘Crazy Radio’) certainly lived up to their name when they qualified for the grand final in 2008. Their entry, ‘Leto Svet’, was not exactly a lyrical masterpiece – besides repeating the words “leto svet” (‘summer light’) about a billion times, all they sang about were several different foods. In order to make up for this, the frog-voiced trio took their live show to the next level. Besides taking a leaf out of David Byrne’s book (you’d almost expect them to burst out singing ‘Once in a Lifetime’ in those suits), their performance involved several dancers dressed in bikinis waving different countries’ flags around (for absolutely NO reason) as well as several pictures of food, while the three men repeatedly did the running man and tried not to look like your dad going crazy at a suburban wedding party. Oh, and around the 1:49 mark, two of the members start enthusiastically humping a piano. You know better than to ask why by now.

Lithuania took trolling to the next level with their meta entry in 2006.

2006 was clearly a bad year for the Lithuanian music industry – either that, or their Eurovision representative selection committee were all on something that year. Joining the competition with a song titled ‘We Are The Winners’, the Lithuanian six-piece LT United spent all of three minutes excitedly proclaiming themselves the winners of the competition, as it was taking place. “We are the winners of Eurovision,” each of them sung, while clearly having a lot of fun taking the piss out of everyone who their sarcasm was lost on. “So you gotta vote, vote, vote for the winners!” It’s a mindfuck, I know; a paradox unlike no other. Plus, it helps that the tune to ‘We Are The Winners’ closely resembles something you once sang while dancing around a campfire in kindergarten, and that the six guys onstage are not taking themselves seriously at all. Needless to say, Lithuania did not win Eurovision that year, but did leave us with one of the best pieces of meta-satire we will probably ever see in this lifetime. In my opinion, they were robbed of that gold.

France’s wooden spoon from 2014 was also certainly their biggest triumph.

2014 will always be Eurovision‘s best year in my eyes – but none of the other entries beats Twin Twin’s ‘Moustache’ in my eyes. It is perhaps the most criminally underrated Eurovision entry of all time, and had the song been written in English, I am very sure it would have gone viral as a French ‘Gangnam Style’ of sorts. Another brilliant parody taking aim at shallow masculinity and materialism in the modern age, the French punk trio ditched their usual hardcore sound to make this Euro-disco-trash dancefloor stonker about a man who has the world at his feet but believes that having a moustache will complete his life. Twin Twin came dead last in 2014 with 2 points, and ‘Moustache’ is a prime example of the fact that nobody hates any country’s Eurovision entries more than the country itself. Like most Eurovision satire, the joke was lost on the audience (especially the French themselves), but this song is the only reason I don’t regret studying French for seven years of my life. Did I mention that I know all the lyrics to this song by heart? Yeah, I don’t know what shame feels like either.

Russia’s best musical offering, ever, undoubtedly comes from the geriatric pop band Buranovskiye Babushki. Consisting of eight elderly grannies (only six of them appear onstage due to contest rules), the pop group hail from a remote village in Russia, and have previously recorded covers of ‘Hotel California’ and ‘Yesterday’, among other legendary hits – so next time your dad wants to start a band with his other middleaged mates, keep in mind that he might be Eurovision‘s next champion. ‘Party for Everybody’ was Buranovskiye Babushki’s second appearance on Eurovision – they had previously competed in 2010 and finished in third place. This time in 2012, their shaky-kneed dance moves and incredibly endearing antics landed them in second place. And, just when you thought it couldn’t get any more wholesome, the band took their prize money and used it to repair a rundown church in their hometown. Maybe they’ll be singing ‘Hotel California’ in there, too.

How Italians enter Eurovision – with a strangely hypocritical song about Buddhism, a dancing man in a huge gorilla suit onstage, and:

Comedy, controversy, and dancing disco balls – Ukraine had it all in 2007.

Arcade Fire, The Killers, and LCD Soundsystem (among others) may be heading a disco revival this year in 2017, but we all know that disco was actually already revived ten years ago when Ukrainian contestant Verka Seduchka performed this number in 2007. The song was as controversial as its dance routine was flashy. ‘Dancing Lasha Tumbai’ was performed in four different languages, much to the audience’s confusion. Seduchka herself, a drag performer, was lambasted internally in Ukraine due to the lack of LGBT+ rights in the country (although she eventually performed on Eurovision with the full support of the Ukrainian board). In addition to that, “lasha tumbai” sounds very close phonetically to the words for “Goodbye, Russia” in Ukrainian – a reference that Russians thought were a subtle reference at the 2004 revolution in Ukraine, and resulted in a year-long ban from Russia for both Seduchka and Andriy Danylko, the songwriter. Danylko initially claimed that “lasha tumbai” meant “whipped cream” in Mongolian, but no such words actually exist in Mongolian. Cue the X-Files theme song… revolution truly does come in disguise.

In 2003, the UK wanted to be Britney Spears really, really badly. They mostly succeeded.

Do you miss the good old days from the last two decades when pop music wasn’t just the same recycled trap beat over and over again, and Britney Spears put out her iconic video for ‘Toxic’? Well, you can relive those days with Scooch’s Eurovision entry in 2007. Replete with sexual innuendos galore (“Would you like something to suck on before landing, sir?”), campy flight attendant outfits that resemble Britney’s ‘Toxic’ ensemble more than just a little, and the raunchiest flight safety video sequence in history, it’s a pity that ‘Flying the Flag’ falls into the category of Eurovision entries that are most hated by their own countrymen. Although I do agree – British Airways had better not take anything from this video, for their own sakes.