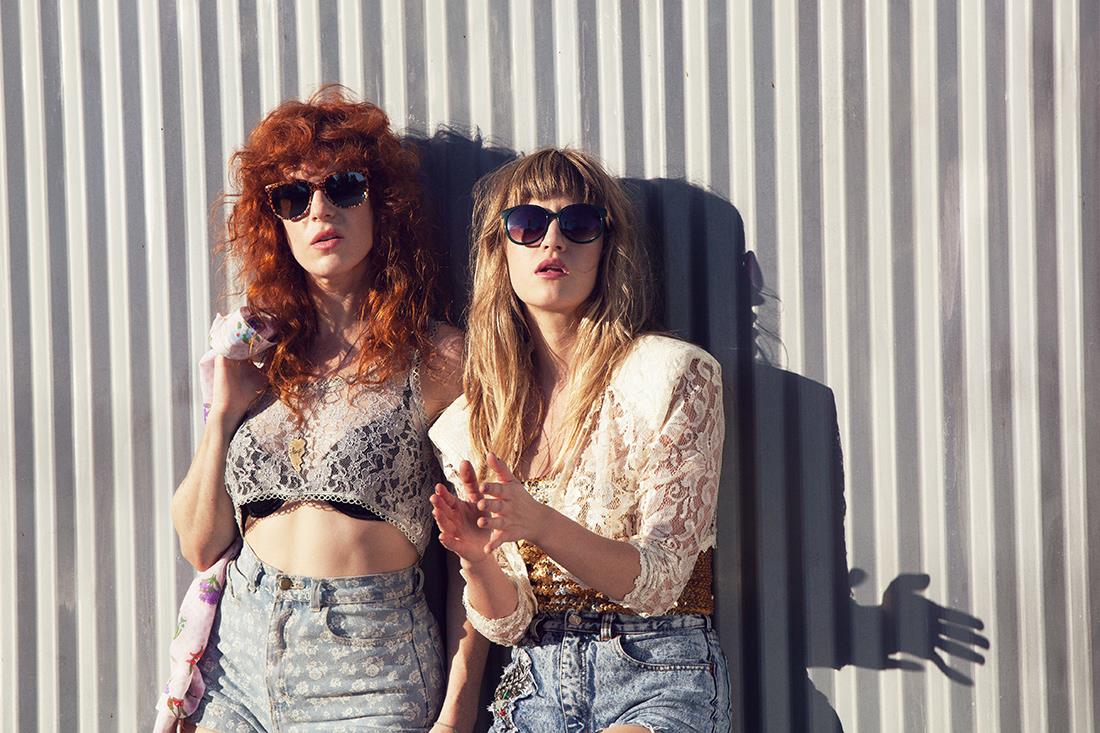 “Rock‘n’roll is dead” has failed as an oft-repeated axiomatic phrase. The music industry is still as nebulous as ever with genres, subgenres, trends, and tropes emerging, fading, reemerging, and waning again as often as Gen-X bitches about Millennials – failing to see their baby boomer parents did the same to them. Or rather, they are just part of pop culture’s recyclability – sentiments and music, they are all the same. Los Angeles’ guitar-and-drums duo Deap Vally is no different, their look, lyrics, and sound are seeping with ‘70s rock’n’roll debauchery – Led Zeppelin riffs, Almost Famous verisimilitude, and raw rock tunes yelping out lechery and general IDGAF ‘tude, clichés appropriated (and subverted) by Lindsey Troy (guitar/vocals) and Julie Edwards (drums/vocals). Their declaration, “We are valley girls; we sing the blues, we play rock’n’roll, we sweat, we move, we groove, we are Deap Vally,” is after all more feminist indignation than the thoughtless licentiousness of the male species. Debut album Sistrionix is elevated stoner rock, taking itself without a hint of hipster irony that pervades their male counterparts and still managing to be a fun record. Managing to catch the band before their performance at Dr. Martens’ #STANDFORSOMETHING gig a while back, JUICE stole a few minutes and learnt a little about who they really are.

How did Deap Vally begin?
Lindsey Troy Almost four years ago, I decided I need to learn how to croquet, and I went into a shop in LA for a class, and Julie owned the shop. She gave me a lesson, we started talking… we talked about our musical history and bonded over that, bonded over our struggles as artistes.

Can you talk about those struggles?
L We were in projects that just weren’t going anywhere and it was getting frustrating. So we just bonded over that, we hit it off and I kept going to the shop. We used to joke about her helping me with schemes to like, take over the world. We even discussed knitting full outfits and just a lot of stupid things (laughs). Then one day Julie asked me if I wanted to start a band with her and the rest was history.

What’s with the name Deap Vally?
Julie Edwards It’s a geographical reference to a suburb in Los Angeles called the San Fernando Valley. A part of that valley is called Deep Valley and I grew up there. People always made of me being from there and Lindsey talks like a valley girl, so people made fun of her for that as well. The name is kind of like taking it back.
L The stereotype with valley girls is like the ones you’d see in movies like Clueless, just girls that are like dumb blondes, stupid and superficial.

‘70s rock comes to mind when listening to your record. What type of music did you girls grow up listening to though?
J The usual you know, like grunge, classic rock, Tina Turner, and Joan Jet.
L For me, a lot of soul music like Motown really factored into it.

What about your favourite band(s)?
L Definitely Led Zeppelin. They’ve got it all. They have sensitive stuff to like acoustic jams, to down tempo country stuff as well as math-y weird, cerebral, ridiculous funky pre-hip hop type stuff.
J Mine would probably be the Beatles, because honestly they have a whole variety, but Led Zep would be the runner up.

Growing up did you guys think that you’d want to be rock stars?
L Yeah, all the time!
J I don’t think that’s the word for it, but I remember when I was little, I was telling my dad that I wanted to be notorious. And I think that’s like either you become the leader of the mafia or you become a rock star.

You’re definitely not the former, Julie. If you weren’t in a band now, what would you two be doing?
J I’d like to do psychological research and discover some new things about the human psyche. Also stuff on why people do things they do, I’d like to explore that type of stuff.
L Umm… I’ll probably have to do with farming. I grew up gardening for my family and being around a lot of nature so that’s really important to me.

A two-piece band is now a rock’n’roll trope. How do you two complement each other?
J In every way, when you’re in a duo, that’s kind of the idea. You have to constantly be complementing each other in some way. When one person is depressed, the other person will cheer [them] up.
L We’re very different but we’re also the same. On a really deep level, we’re actually very similar. But on a superficial level, we’re different. I guess it’s like our nature is the same but the nurture we had was different. We have different taste in movies though, it’s weird. Especially in comedies, like I love all the Judd Apatow movies but she’s not really into those
J Sometimes actors bother me. I feel that everything is a little too perfect. It really throws me off, it’s like how I like music to be raw; I would prefer movies that have an authentic feeling somehow. Like that series Lost, who is maintaining their eyebrows all that time? All I want is some realism. If you’re stranded on an island for three months, you’d look crazy, you’d have dreads!

Your music has been compared to White Stripes and Led Zeppelin. What do you guys think about being compared to these musicians?
J It’s incredible.
L White Stripes haven’t been a band since we’ve been a band.
J One of the greatest losses of all time. (Mocks a sad expression)
L Don’t really know what happened but I know that I read somewhere that Jack White just wanted a relief from tightness of being a two-piece. Especially when you’re playing live, there’s so much pressure on a performance.
J They probably like spent too much time together too.

Do you think that would happen to you guys?
L It happened to Death From Above in 1979 but they came back together!
J I think it’s only natural for bands to need breathers, and I think so many bands have come before and their relationships have deteriorated so much, like the Beatles for instance. If you’re smart and you look at the history of music, you can decide why they let it get to at that point of deterioration and be over the whole question of, “Why not maintain [the band] so everything can live and exist together?”
L: But the Beatles did so much right, so it’s hard to criticise them in any way at all.

So… do you guys fight a lot?
L We don’t fight very well.
J Mostly because I’m not really the fight-y type.
L Yeah, she’s not really a fighter, so then I just feel like a weird aggressor, like I’m abusing her or something. (Laughs)

What does the future hold for Deap Vally?
L We started writing our next record and hoping to get it out next year. This will be the sophomore album, the next step from our first record. The next record will be more raw but in different ways. Like it may be more complicated musically or something since we’ve become better players, but [it is] raw in other aspects.
J We’ll definitely keep it raw though, it’s not like we’re going to do baroque pop or something and I think raw is like the fight we fight and it’s how we maintain balance in the world of so much manicured, contrived, and overthought music.