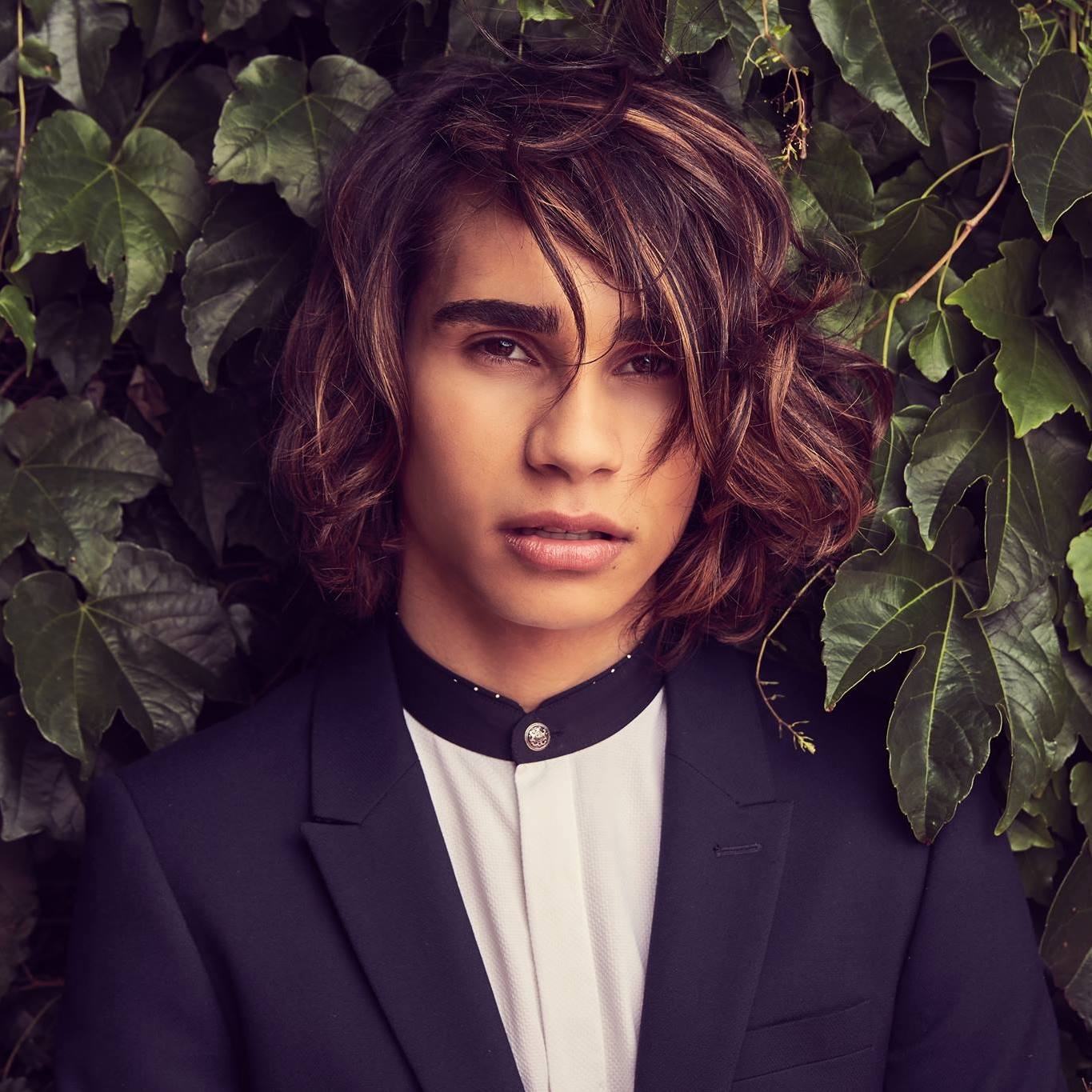 Seventeen is a pretty strange age to be at. You’ll find most 17-year-olds worrying about their A-level results, pondering their career choices, and mostly facing the existential dread that comes with the end of one’s adolescence and the thought of having to step out into the big wide world and become an adult. But at 17, Isaiah Firebrace appears to be facing none of that anxiety. With a deep, soulful baritone that hardly matches his boyish charm and young age, the Australian singer (who goes by his first name as a mononym, Isaiah) is currently living his best life – after winning The X Factor in Australia last year, he went on to record a debut self-titled album which took Aussie and New Zealand charts by storm, and as if that weren’t enough already, he was chosen to represent Australia on Eurovision 2017 and placed ninth overall in the grand finals.

His vocal chops are second to none in the pop scene, except perhaps for the greats like Adele – but that should come as no surprise, seeing as he’s been singing since he was three years old, and won a scholarship to a prestigious music institution when he was barely in his teens. And yet, in spite of his increasing fame and growing fanbase of devoted teenage girls (as every heartthrob is bound to have), Isaiah still remains remarkably humble even as the spotlight remains trained on him. For Isaiah, real life is only just beginning, and he’s ready to seize his bright future in music with all he’s got. In order to find out more about his storied past and the many things that the future holds for him, we even sat down with Isaiah for a chat on his brief visit to Singapore, and got to know a little more about what makes him tick.

Hey, Isaiah! First of all, we’d like to say congratulations on your success at Eurovision! What was it like participating in one of Europe’s biggest musical events? Were you nervous at all?

Thanks! Well, first of all, I was very very excited, and I was just so happy to be there. I was a bit nervous as well, because it’s just such a big thing and nerves are a normal thing before performing. But yeah, I had so much fun, and it was awesome!

You grew up in Moama – quite a small town in New South Wales, and you had to make a six-hour round trip to Melbourne for singing lessons. Besides that, were there any other challenges you faced learning music and making music from a small town?

We had a lot of instruments in the house, like piano, guitars, drums, and an electric keyboard. There were always things around so that I could practise my singing. And like you said, I made the trip to Melbourne every weekend because I did vocal lessons. But it was really hard on my family – we didn’t really have that much money. But now that I’m travelling the world and getting an income, I can support my family.

So your career is giving back to them, in a way?
Yeah, definitely.

“I still feel like I’m just the same guy and the same person from this small town – and none of the hype.”

That’s amazing. You’ve been performing for a long time now, too – since you were in your early teens – and you’ve been on various singing competitions, even winning last year’s X Factor in Australia. Is being in the public eye at such a young age scary at all? How do you feel about it?
I do feel comfortable with it all. It’s been my dream to be where I am today, and I’m just kinda enjoying it and not really thinking about things. What’s different is just that I’m now doing more singing, and more music stuff. Otherwise, I still feel like I’m just the same guy and the same person from this small town – and none of the hype.

What do you mean, none of the hype? Surely you get people who recognise you in the streets – is that a thing that happens to you?
Yes, actually – and even in Singapore. It’s been really crazy to have people recognise who I am, both in Singapore and in Australia, and in some of the other countries I went to after Eurovision. It’s good! I always like meeting my fans, because obviously they’re the ones that make it happen for every single artiste in the world. So I’m really engaging with my fans, I would say. But it’s really weird and crazy – in a good way. It’s like… I wouldn’t expect people in Singapore to know who I am, d’ya get what I mean?

Yeah, we get it! It’s not that far away, but it’s still a different environment and a different country…
(Laughs) Yes, exactly.

And are you enjoying yourself in Singapore?
Yes, I love it here! I’ve been to Bali, but I think this is my first real ‘Asian experience’, and I’m really enjoying it. I love the weather – it’s nice and hot.

Cool… It’s good that you’re enjoying yourself! Speaking of Australia, we hear that in your hometown there are local shops selling food named after you – there’s a smoothie called ‘Isaiah’s Dream’, and there’s also an ‘Isaiah Burger’! Have you tried those? And what are some of your favourite foods apart from those?
I have actually tried the smoothie! I haven’t tried the burger, but I have had the smoothie, and it’s really good, actually. I was a bit skeptical when I was trying it… I was like, I hope this isn’t gross and people have been buying it even though it’s gross… (Laughs) But as for my favourite foods… I like a lot of different types of food. I don’t really have a favourite, because I just like so much.

“I love doing a lot of adventurous stuff. I’m a bit of a thrill-seeker!”

When you aren’t performing, what do you enjoy doing? Obviously singing is a passion of yours, and that’s your full-time focus now, but do you have any other hobbies outside of music that you also enjoy?
I like going for walks, travelling, and going on road trips. I also like swimming; I love doing a lot of adventurous stuff. I’m a bit of a thrill-seeker!

Is that something that comes with living in a small town in Australia, where the wilderness is pretty much accessible for fun?
I guess so. Like, I grew up riding motorbikes and stuff; being a bit rough and tough. I think that’s probably why I like doing crazy stuff.

“It’s hard to pick [a collaborator] – you can either pick someone who would benefit your career, or someone that would just be fun to perform with.”

Going back to music – you’ve worked with some really big stars, like Adam Lambert, and you’ve also sung with your hero, Jessica Mauboy. If you could collaborate with anyone else at all in the music industry, who would it be?
Aw, that’s a good question. Oh, there are so many artistes out there with big-profile names like Ed Sheeran and Adele, but… I don’t know! It’s hard to pick – you can either pick someone who would benefit your career, or someone that would just be fun to perform with. I think maybe I’d like to collaborate with Calvin Harris, as a producer. That would be cool because I know he’d make a really good song and he’s good at making hits. But to perform and actually sing a song with someone… aw, that’s a hard question! I don’t know!

Thinking in terms of fun, who would you like to just get onstage and crack out a song with?
Well, in that case, I think Bruno Mars would be cool. His music is my genre, and uptempo, and he’d be really cool. But also, someone like Beyoncé would be good. She’d fill a stadium, and her fans are mental. It would be the best experience of my life. She can sing and dance, and she has everything going on. And someone like Adele – obviously she’s not as performative and she’s more about the vocals, so just singing a nice song with her would be cool as well. There are so many options, so I can’t choose!

It’s nice to see that you look up to so many people, and you’re still staying humble for someone who’s just blowing up out there at the moment.
(Laughs) Thanks.

“And I think it’s good that I’m in this position – there’s not many young indigenous teenagers my age doing what I’m doing.”

A lot of people are very happy that you were chosen to represent Australia at Eurovision this year, because you’re Aboriginal Australian, and it’s refreshing to see that kind of diversity in the music world today. You’ve also previously said that you hope to be an inspiration for all indigenous Australians out there, which is great! Have you faced any challenges in this regard, though?
I haven’t really experienced that much racism growing up. Where I grew up, everyone in my town was just… not racist. We all got along well. But I do want to be an inspiration for not just indigenous kids, but any young dreamers out there in the world. I want to show them that you can go and chase your dreams! And I think it’s good that I’m in this position – there’s not many young indigenous teenagers my age doing what I’m doing, and I think that this is good because it can give people hope that they can do the same.

Besides Jessica Mauboy, who you’ve worked with, who are some other great indigenous Australians that you look up to?
There’s a woman called Christine Anu, she’s a really great Aboriginal singer-songwriter. She sang this song called ‘My Island Home’, and it’s a really nice song because it’s about Australia being your true home and about how beautiful Australia is. That’s a song I really like by an indigenous artiste. And actually, even though my dad isn’t really famous or anything, he’s a really great musician. He taught me all I know about music, and about instruments, and he’s someone who really inspires me as well.

“It’s just in our blood, and family is a big part of who we are.”

That’s really admirable – that you’re still a family man. A lot of other musicians out there nowadays don’t really feel much of a connection to their families, or so it seems. It’s really cool to meet a musician who puts their family first.
Thanks! I feel like this is especially the case for indigenous people in Australia. I think everyone who’s indigenous is really connected to their family, and families are a really big part of our lives. It’s just in our blood, and family is a big part of who we are. I always make time to see my family. So when I go back to Melbourne tomorrow, I’m going to see my sisters and my other siblings.

We hope you have a good time with them! One last question – what are your future plans in music? You’ve already got a new single out called ‘Streets of Gold’, is there an album in the works too?
Yeah, I’m definitely working on more new music for an album, which is really exciting. I’m excited to release my singles too, because they’re really cool and fun, and I think people will really love them!