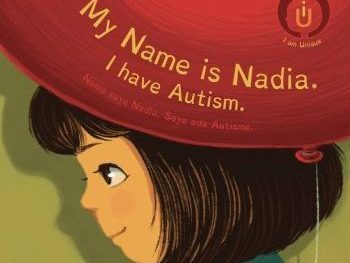 April is Autism Awareness month and there is no doubt that there are still many misconceptions and lack of awareness regarding the condition. Children’s book My Name is Nadia, I have Autism was written by 19 year old Huda Ryaz Patel to shed light on the realities of Autism.

This Sunday (29 April), the author herself will be having a book reading of her debut children’s book as well as a personal panel discussion on the issues of autism in Malaysia at Liberal Latte in Damansara.

My Name is Nadia, I have Autism is a children’s book following nine year old Nadia who is diagnosed with ASD (Autism Spectrum Disorder). The first person narrative highlights the realities, misconceptions and obstacles that children with autism face. It is written in both English and Malay. The book is also printed in Dyslexie Font which is a special typeface that will mitigate some issues that those with dyslexia experience when reading.

What started as a school research project soon turned into something more–making her one of the youngest children’s book authors. At 18, Huda had chosen to explore Autism for a project for one of her A-Level subjects at Garden International School student (GIS), which soon became the inspiration for her first children’s book. My Name is Nadia, I have Autism was officially launched on April 2nd 2017, World Autism Day.

Huda’s writing journey started after meeting Nadia who was autistic and her family in Johor August 2016. It urged Huda to highlight the realities of ASD in children as she felt that there wasn’t enough awareness within both the Malaysian and Singaporean public. Soon she continued her journey to Johor during weekends to spend time with Nadia and her family. Her interaction with helped her understand the mindset and reason behind the behaviour and feelings of a child with autism.

There are approximately 9,000 children born with Autism every year and around 300,000 people of all ages with autism in Malaysia. On average most Malaysians won’t recognise someone with autism as they look just like us, but with definite behavioural differences. Signs of ASD can be detected from 18 months old to six years old. Many new parents who have autistic children will not know how to spot the symptoms or are unsure how to help their child. This book is a good way to introduce children and parents to ASD, explaining from a child’s point of view what is all about. My Name is Nadia, I Have Autism includes an information section at the back of the book on ASD and symptoms that they can look out for.

Before the official launch of Huda’s book went on an early sale in Malaysia, United States and Singapore, raising up to RM10,000. The proceeds from this launch were donated to National Autism Society of Malaysia (NASOM), Support for Parents, Infants and Children through Early Services (SPICES) and Early Autism Project (EAP).

A year since the launch, the sale of her book was able to raise SGD 3000 which went to Association For Persons with Special Needs Singapore (APSN), Lighthouse School, MIJ Education Hub in Singapore as well as Early Steps Care Centre in Kuala Lumpur.

Huda hopes to become a doctor in the paediatric field and is furthering her studies in medicine at IMU in Malaysia.

My Name is Nadia, I have Autism will be on sale at Liberal Latte this Sunday for RM30 and all proceeds will be donated to charity. Show your support for the cause by purchasing her book or attend the event this Sunday, 29 April.

If you can’t make it to the event, pick up her book at Wardah Books and UnguPen in Singapore.

PUMA Will Turn You Into A Gothic Baddie

Pair these items with a badass winged eyeliner and you’re good to go!

We are definitely getting “The Most Cun Amoi In Malaysia” T-shirts for our mums. How about you?