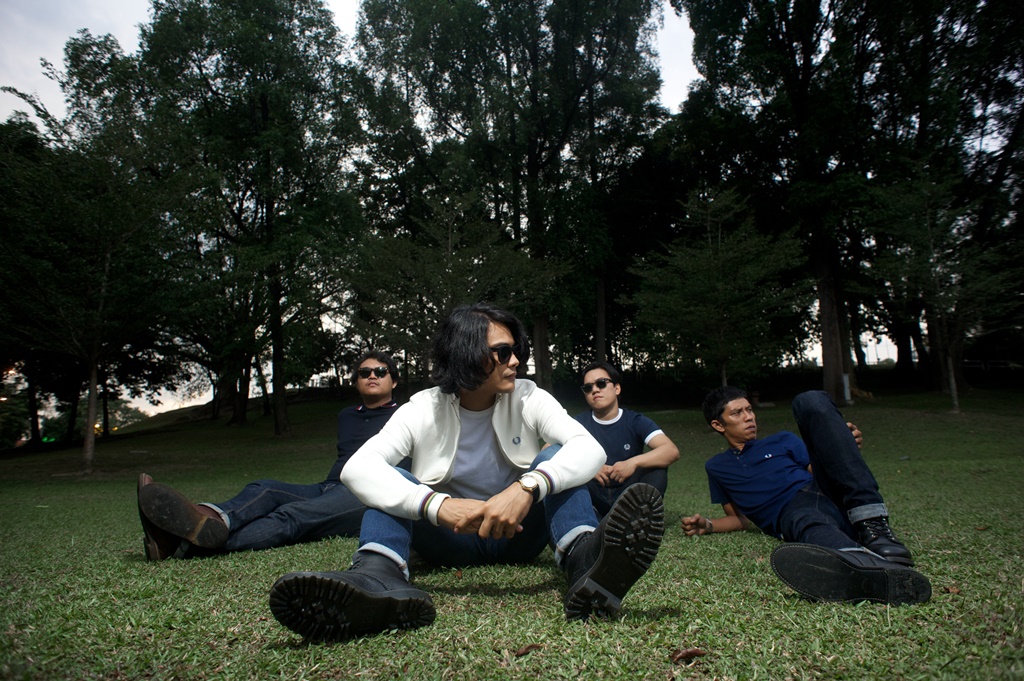 It’s been 11 years since the formation of Britrock-channelling quartet Bittersweet in the town of Ipoh – an astounding achievement of longevity in the fickle independent music scene. Despite some strife and the departure of the original frontman Pijie, still, the new lineup featuring lead singer Fizan has played together for a commendable six years. However, it is lead guitarist and chief songwriter Herri who’s the heart of the band, the central component in shaping Bittersweet since founding the band more than a decade ago. Though he couldn’t be present for the interview, nevertheless, JUICE sat down with frontman Fizan, keyboardist Emai, and guitarist Moon to talk about Fizan’s adjustment to being the voice of a band he and many fans have idolised as well as the making of their third album in four years, BTSWT, and how it’s the impetus for introducing a renewed Bittersweet.

Fizan, if we’re not mistaken, you became the lead singer of Bittersweet at 22. How did you come to join the band?
Fizan I was their roadie in the beginning, I drove them to JB and such, angkat diorang punya barang-barang… I was in a band (Dance To The Radio) too. Then, I went to college, so I stopped music for a while. This one random day, Emai called me asking me if I were free because they had a gig. I thought they wanted me to [be a replacement] guitarist but they wanted a vocalist. I was quite shocked.

What about his singing that attracted you to ask him to replace Pijie?
Emai He sounded like Alex Turner from Arctic Monkeys. He had a different tone from Pijie. And since the day he joined us until today, I can say there’s a differentiation [in his voice].

Were you guys worried as to how fans would react to Fizan as the new frontman?
F When a band loses its frontman, it’s quite difficult for the band, yeah?
E It was a disaster in the early years. We tried to convince him (Fizan), like, “Dude, this is an independent band. It’s not like we’re attached to a big label or anything.” We just played what we wanted to play. [Fans] have to listen to us, it’s not that we have to listen to them.

Fizan, while you’re the ‘frontman’ as the face of the band, Herri is the lead guitarist and the lead songwriter – he’s the core of the band. How do you guys share the responsibility of being these two different leads?
F Yes, he’s the main guy, he’s the backbone of the band. For me, I think Herri’s more on the music and the direction of the band. I just deliver what he feels for a song. We try to meet on common ground. It has turned out well, but of course, working with Herri is not an easy job.
All (Laughs).
F He’s a very particular person. He’s a perfectionist. So, I learnt a lot from him.
E Yeah, but we all respect each other, that’s why we can maintain the band for so long. To me, to create or disband a band is simple, but to maintain a band is the hardest part.

With Herri based in Ipoh and you guys in KL, how do you guys work together?
E Herri writes the songs in his home and we still connect with one another on our WhatsApp group, or he’ll call us…
F We always maintain constant communication with each other.
E When he has a new song, then he’ll separate the songs for guitars, keyboards, and everything. We’d practise and once we meet, we’ll build the songs together – that’s how we do it.

How often does he come down to KL?
F Once a week… Nowadays-lah, because he has a family now. Last time, bujang, single… (Smiles).
E … When he’s here, he’d be here for three to four days or three to four weeks.
All (Laughs).
E But now, we don’t have much time to play around. When we’re together, we’re focussed.

What’s the direction that you guys wanted to take with this new album? How is it different from Perfect Match and Empire’s Transition?
E For this album, we do have a route for it. We wanted to rebrand the band because we have been stuck with the previous lineup on Empire’s Transition. We wrote eight to 10 songs with them and then we split up. We messed around, and then he (Fizan) came on and we rerecorded the whole album again with two additional new songs for that album. So, this is a rejuvenation of the band – a rebranding of the band. We want to tell people that Bittersweet has this four current lineup, please stick with us.

Is that why the album is self-titled?
E Yeah, we had a lot of conversations about our album title, there was a lot of ideas. But at one point, we just decided, “Why not? Have it self-titled.” We are going back to the main objective of our rebranding by self-titling it. Bands either have a self-titled album for their debut or when they rebrand themselves. 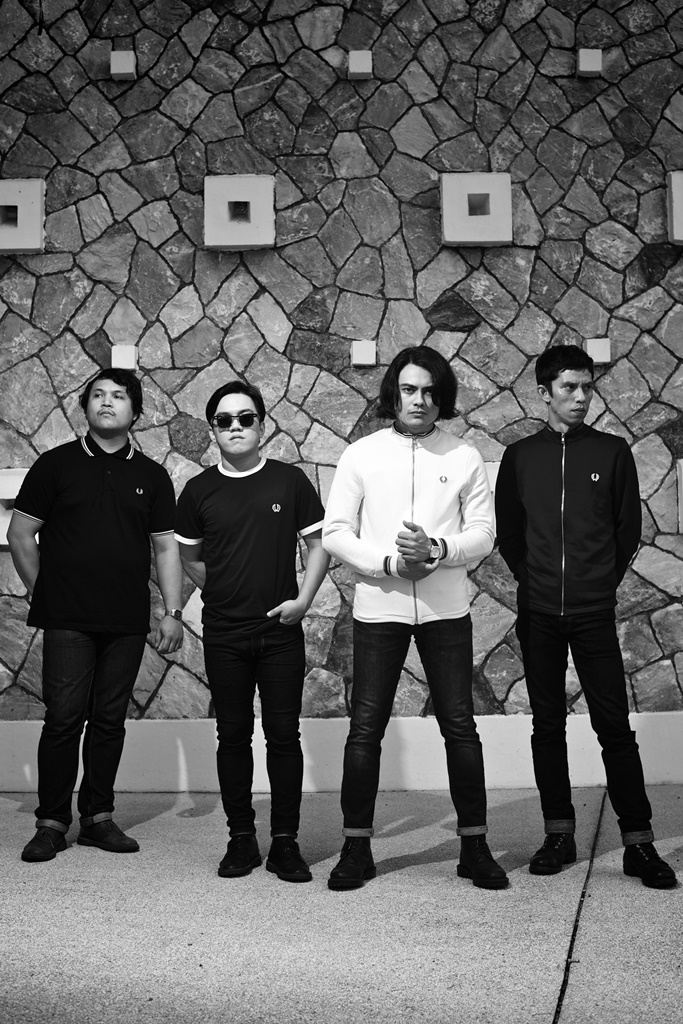 Can you talk a bit about the recording process of BTSWT?
E Each album had a different way of producing. For this album, we experimented with different sounds; the way we record it. Previously, we never tried recording live, we’ve only recorded track by track – one person comes in, then it’s the other person, then we send it for mixing and mastering. This time around, we got everyone to play together to get [a feeling of a live performance.]
F That’s what Bittersweet is all about.
E We’re a live band, that’s how people recognise us.

How do you three individually add to Herri’s songwriting?
Moon Arrangement and on the sound.
E For me, I’ll ask him about his inspiration. He’ll say he was inspired by someone like Teenage Fanclub, so I’ll go home and listen to that sort of stuff and we’ll practise, especially on the tone.
F I sit down with Herri a lot. Sometimes, he’ll call me, like, “Fizan, I have new a song. Come over.” I’d go over [to Ipoh], and I’ll listen to the products, and I’ll ask him what are his feelings for the songs. We try to meet on common ground. “Okay, I can do this, I can do this. This one, cannot; this one, cannot. Ni, mungkin nampak cam bodoh,” then, we’d try to fix it. We’ll all gather together and listen to what the songs are about… that’s how Bittersweet is, that’s how we work.

How long did it take you all to finish BTSWT?
E We started writing the songs when we came back from Jakarta [for a tour] in late 2012. Herri started composing and we started recording in 2013. People kept asking us why it took so long for us to release the album. But it’s a rebranding! We need to be particular on it, it’s going to take some time. If we take it easy, then it’ll be cincai lah.

Based on the two singles you’ve released, fans would know that there is a change in the musical direction. How has the response been to the new material?
F We were quite shocked by all the positive feedback. There are a lot of positive comments on YouTube. Tak ada lagi lah bad comments like, “Eh, tak sedap lah!”

Does that mean you received a lot of bad comments before this?
F Tak jugak…
E They just kept asking why we’d changed the vocalist. We were just fed up with that sort of questions.

Currently, would you say the fans have accepted you as the vocalist, Fizan?
F Yeah, I can say so. I cannot be Pijie, obviously, I can’t be the same person. It took me years to accept myself, embrace myself. At first, (worriedly mutters “I can’t be like Pijie, I can’t be like Pijie,”) because I look up to him, he’s one of my idols. Bittersweet was one of the first bands I listened to. But now, I’m in the band. So to be in my shoes, I don’t think ramai orang boleh buat. There’s a lot of pressure. Even though they sing along to your songs, they’d raise their middle fingers in the air. But, that’s the reality, that’s the struggle that you have to accept. What I do believe is that if you keep on doing what you love, just ignore all this noise and such. If you don’t like it, it’s fine. I don’t die for it. You must have that pride.

How did you feel when you were asked to be the frontman of the band that you idolised then?
F I almost peed, man.
All (Laughs)
F I remember the first show in JB, I was very, very, very nervous. But then the second show was Rock The World… (eyes widen in terror and feigns a panicked shiver)

We remember Bittersweet used to dress up in Mod outfits with Wayfarers on, you guys even had mop hairstyles. Does fashion play an important part in the band?
E We think that fashion grows along with music.
F Like the punks had the punk look, the mods had the mod look… and currently we’re attached to Fred Perry…

Yeah, Fred Perry as a brand is steeped in various British subcultures. Since you guys are undergoing a rebranding, will your look change as well?
F So far, we haven’t thought about that yet. We’ll do whatever we’re comfortable with.
E People will get old-lah. We’re not gonna wear skinny pants when we’re 40.
F (Laughs) Blue skinnies! Yellow skinnies!
E And our weight too… I used to wear S, nowadays it’s L. I skipped two sizes! (Laughs)
F We just wanna look mature.
E Yeah. Even our listeners have matured. They’ve grown with us. People who have listened to us from day one have changed too…[they] have families and all that.

Can you guys talk about the upcoming showcase with Hujan at Urbanscapes? How did the pairing of two of the most recognisable bands in the local indie music scene occur?
F We just wanted to do our showcase by ourselves. But it’s all Syafeeq (band manager), he sorted everything. Double bill with Hujan! Why not! Hujan is massive; Bittersweet, we have our own character, we are on a class of our own, and they are on a class of their own. Hujan’s about to release their album, Bittersweet is about to release our own album… I don’t know if you realised this or not, but the local indie culture, the music scene, sekarang dah drop sikit. The gigs are very small. We hope with the launch of both our albums – [also,] One Buck Shot is gonna release their album too – I hope [these releases] will spark back the industry. This new album, we’re not doing it for ourselves, we’re doing it for the scene too.

Bittersweet’s third album BTSWT will be released on Friday 1 April ‘16.

Their joint showcase with Hujan for Urbanscapes ’16 will be held on Sunday 24 April ‘16 at KL Live. Purchase show tickets via www.peatix.com. To catch them earlier, attend the second edition of TREC KL’s A Sunday Affair this Sunday.