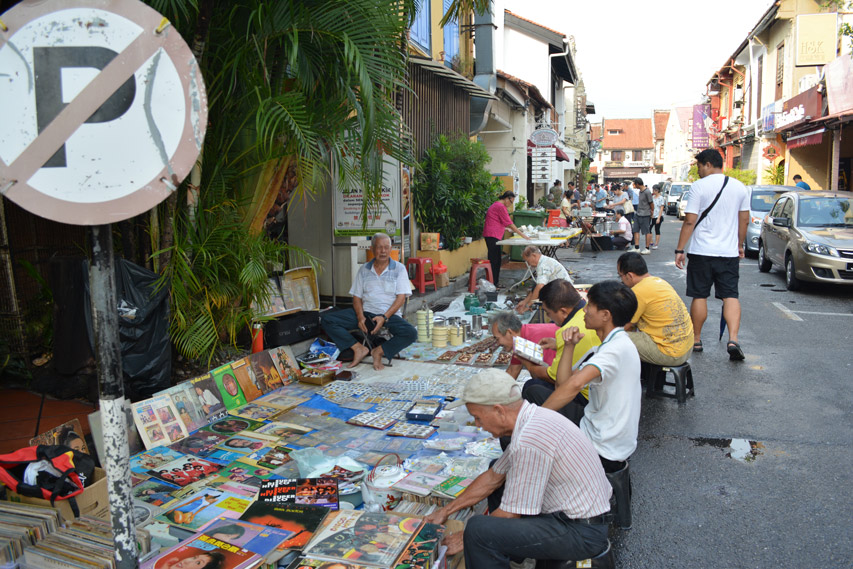 On a whim, this writer decided to head down to Malacca and somehow (unsurprisingly, actually) disrupted her own holiday plans by proposing to write about the short trip to the UNESCO World Heritage site. The initial idea was to do a bullshit listicle, think ‘Interesting Things To Do in Malacca’, which is a proper task in itself, if one – a non-native like ourselves – truly endeavoured to scour activities in this cultured and historical town.

When we arrived, it quickly dawned on us that there was indeed nothing that hasn’t been blogged, documented or written about in the papers/on the internet – be it food, street art, cafes, sights or what have you. The heat was unbearable and the hoards of people too. The absurdity of the line outside Chung Wah Restaurant for chicken rice balls was such an occurrence, such a sight, that mat sallehs were taking photographs of the insane queue. At that point, we felt a potent mix of shame and agitation as we witnessed this whole tragicomedy. Also, the night at Jonker Walk was an overblown sham; essentially a glamourised pasar malam, we kid you not. Don’t be attracted by the glob of people stuck in the market, it should be avoided entirely.

Demoralised by tourist traps, we were walking around the outskirts of Jonker Street to search for the infamous Hell’s gate – or in Mandarin, Guai Men Guan – at the recommendation of our Art Director. It was extremely difficult to locate it, we knew it was at Lorong Jambatan, but googling and even asking the Hokkien speaking locals on its whereabouts proved to be futile. But it was not until we gave up finding it – only by simply stumbling into Kampung Jawa – did we finally found it. At first, we were fascinated by the old-world shophouses which we’d only seen in Penang, but some of the shops were still in business. There were a bustling pet shop, old-school barbershop, and a few sundry shops, but it was a small yellow shop called Sin Hiap Hin that caught our intrigue.

A very kind lady walked out from the back of the shop to greet us with an eager smile. The majority of the storefront was taken up by the main attraction—a sturdy 100-year-old wooden bar. Although it had taken a dull complexion, it still felt like a mighty piece of furniture. The lady—Lee Lian Suan—had married into the business in ’73, taking over from her great grandfather-in-law who started the bar in ’41, almost at the time of the Japanese Occupation. And yes, as one would guess, this very bar was patronised by those soldiers. It seemed that Mrs. Lee was the only one who manned the bar in spite of her husband and she did indeed have a flair for it. She consistently smiled as she explained the different liquors to us, always urging us to try a shot (RM4), but we politely refused. However, when we expressed interest in purchasing a few bottles, she highly recommended the lychee liquor—a popular selection among foreigners. But upon examination, we found that it was made in Shah Alam; we wanted something specifically indigenous to this state. Mrs. Lee had a few Malaccan liquor to share such as the one made from coconut and another one made from rose extract. We were tempted to buy a few, but we settled on the rose as well as the rice liquor, costing us RM31. The business will probably meet its conclusion soon enough when she eventually decides to cease operation. Even though she has children, they’ve scattered in other major cities for brighter careers. Though she didn’t seem particularly sad about this fact, maybe it was because the store hadn’t received much of a response from people as it did in the past due to its obscure location far from the tourists and travellers. But having been to Sin Hiap Hin, it’d be such a waste to see it quietly disappear, or a worse fate, reappropriated into a café à la Penang.

Crossing the legendary Kampung Jawa Bridge where it’s been said that Japanese soldiers during WWII would impale the severed heads of locals onto the pillars of the bridge, it truthfully just appeared as a well-maintained, clean bridge with no inkling of past horrors at all. There were the usual sundry shops and a few signs of gentrification in the form of a café and two lodgings. It may soon bleed into the village across the stream, who knows? We continued walking quite aimlessly really, subconsciously hoping we’d find a gem like Sin Hiap Hin. We walked and walked till we saw a second hand bookshop; we went in to gratify a habitual book-buying itch and instantly we were met by these odd cat collages that were plastered on the walls a few streets away — Jalan Tukang Besi specifically. We knew it was the same guy because the artwork was very distinctive. And so, we decided to ask the sullen looking fellow manning the shop for confirmation. Sure enough, it was indeed him.

Soon — his name — had lived with cats for 30 years, they have been his loyal companions, even as he lived in Switzerland with a German partner, working on and off. Like many artists, Soon’s art is open to interpretation, but we’ll just describe them for you; they were essentially Dadaist collages of people or just bodies of people with the heads of felines, but with an undercurrent of commentary on religion and spirituality, it seemed. There were also a few hanging crafts of said imagery but also of one depicting a narrative via sequential art. Unlike the books, the art was not for sale unfortunately. He said he gifts them to his friends or private owners. Additionally, Soon shared that he writes poetry as well. Does he do recitals? Only among friends, he said. Originally from Malacca, he returned from overseas six years ago. He currently lives in the shop with a stray grey cat. Only when you speak to him, he’d smile pleasantly, otherwise he’d quickly revert back into a depressed state, he almost seemed hollow, sometimes he even appeared catatonic. Eventually, we decided to purchase a collection of stories by Bukowski, Soon beamed as he regaled about his time spent at the San Francisco publisher-cum-book shop City Lights. He even gave us a bookmark in the form of an anthropomorphised monk with a head of a cat as a great token of remembrance. We didn’t dare ask what led him to his current state because we didn’t want to be rude, but from the few tales he shared, he seemed to have lived quite the bohemian life.

We were so lucky to have found these two wonderful people – we hope you can do yourself a service by forgoing the god forsaken sate celup and coconut shakes and pay them a visit instead.

Sin Hiap Hin is located at Jalan Jawa, whereas Mr Soon’s book store can be found along Jalan Kampung Pantai.