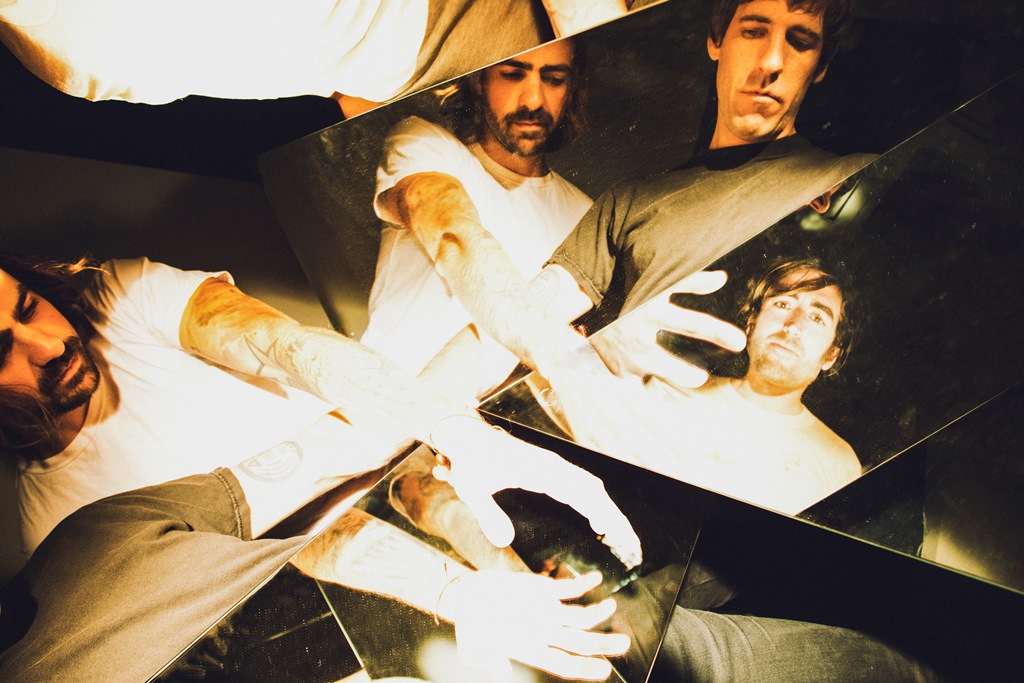 Hailing from New York, post-punk band A Place To Bury Strangers is a band that’s been pegged with an unshakable label— “The Loudest Band in New York”. Though this association is well-worn, having had a first-hand experience of their live performance, we can attest that the cliché is rooted in truth. With a sound that’s cloaked in reverb and distortion, as well as Oliver Ackermann’s shrouded vocals, it makes for an all-consuming listening experience. Ahead of their ear-splitting show, JUICE spoke to the band about the making of their latest album Transfixiation—from deriving songwriting inspiration during uneasy moments in their lives to trusting their instincts—as well as touching upon Oliver’s effect pedals company Death By Audio that has custom made pedals for the likes of Nine Inch Nails, Wilco, and U2.

You guys have talked about your labouring in capturing a certain sound or a moment for the record, and we’re guessing that the control was ultimately creatively constricting?
Dion Lunadon We’re free to make any choices we want when we record.
Oliver Ackermann And there’s also so many things that you can always do constantly, it’s completely open in the air. So, to have a couple of guidelines and ideas to go by, it sort of makes it kind of free to explore certain avenues and not have to be constantly contradicting, and questioning, and wondering. You can really spend forever; even to get this one particular sound or whatever. On this record, we focus so much on capturing the pure emotion of what was going on. We weren’t focus as much on those little details, so we could really dive in wholeheartedly into what the feeling behind these songs are, what it feels like to play these songs, and how it physically affects us while we’re playing, and it was kind of free. There was something that was happening that was unhuman, it was great.
D Rather than a constriction, it was a rough plan, like, “This is where we’re at, we’ve been touring a lot, the band is sounding good. How about we approach it like this?” You know?
Robi Gonzalez And also, I think it’s just to capture something that came natural to us.

But there was a lot of difficulty that was documented when you guys were making the album, right?
D There was, but I think this is the easiest album that I’ve ever made.
O Totally, I think there were emotion and stuff, it gave us material and stuff to write these songs. We didn’t know what was going on with the band, whether it was gonna be the end of the band… In some ways, it kinda made it easy. You know, someone is breaking up with you or whatever, and you’re madly in love with them, how horrible that is, maybe…
D He’s trying to tell me something… (laughs)
O (Laughs)… How wonderful it is for songwriting inspiration, and something that, I don’t know…
D … Something that gives you life!
O Yeah, you need an outlet, almost. I mean, when bad things happen you need to overcome it because it sucks at the time. But you develop some sort of strength when you have to deal with this sort of situations. Otherwise, you’d just stay in your happy little bubble; you don’t put your life at risk…
D It sucks when your life is going smooth, when you sit down to write a song and you kinda go like this (taps the table), “What can I write about? My life is so mundane at the moment. I’ve got nothing to write about.” You need some action.

So you guys drew internally for inspiration for the album?
O For some of the stuff, for sure, you know what I mean? There were a few songs that were really about that and were rooted in that. It’s also about questioning your own life, like what you’re doing is valid and stuff, and to figure out if you’re one side or the other.
D I think the more intensely you feel about a subject, how honestly you feel about it, the realer and deeper, you’re really honing on the emotion.
O Yeah, you see people who sing all these cookie-cutter cover song or some shit, I mean, you can just tell! They’re maybe classically trained, you can’t deny that they have a good voice, but there’s no truth to it.

One of the reasons you guys like to play loud is because it allows a level of catharsis, but we once read that Oliver is a bit protective over your ideas and would let listeners interpret themselves. How do you guys balance that?
O There are kind of like two of those things going on, maybe it doesn’t necessarily make sense in some ways, but you don’t kinda acknowledge that. If you can just sort of block all those things out, you can let that happen and be worried about it. If you’re too focused on some of these things, like maybe I would be too scared to go on stage, you just get lost in what you’re doing yourself. It ends up maybe forcing it down somebody else’s throat in some ways, you know. I feel confident in what we do and to that, it gives you the strength to go in front of people.

There are two songs from the album—‘Deeper’ and ‘We’ve Come So Far’—that were recorded in Norway and was co-produced by Emil from Serena-Maneesh. Was Norway a part of the vision that you guys had in mind during the making of the album?
O Not really. There was a collective in Norway which invited us to record there and to do this tour in Norway, so we were like, “Yeah, sure. Why not?” It’s an honour.
D It would be an honour.
O And we called our really good friend Emil who’s from Sweden to come and record with us. It was such a cool and fun experience. It was kinda like we added someone else in our band, all of us just got together and played instruments and recorded together. Everything was good.
D It turned out well.

We know that you guys have always preferred to produce yourselves, but how was it like collaborating with Emil?
O He was great, maybe some people wouldn’t be, but he’s a long-time friend, and he had similar visions to what we do, you know, he grew up listening to the same music and likes the same things as us. It was really natural.
D Yeah, just like he said, it was like he’d joined the band. It wasn’t like he was our producer or anything.

Was the inclusion of female vocals something that was planned?
O No, Emil’s girlfriend was there and we were just like,”Let’s get her to sing these songs.” It just made sense, I think. The songs were rough ideas when we got there, and we wrote them and completed them once we were there, so we just wrote the parts—she said she would sing—we just took that into consideration.

We thought the addition of her voice—especially with ‘Deeper’—it made it even eerier. It provided a textural contrast.
O Oh yeah, totally.
D Yeah, having a female in there made it into a different angle for us, which is a nice dynamic.

The song ‘Lower Zone’, it has a bit of an oriental-sounding instrumentation to it. What was it? Did it come out of something that you’ve built?
D (Looks at Oliver) You did it yourself.
O No, it was just one of those songs where a sound just kind of came out and we were sorta interested. It formed out of nothing in some sense.

So, it wasn’t any sort of oriental instrument then?
O (Laughs) No, definitely not. I don’t know how to play any scales or anything, so to be able to come up with a part, it was intriguing to me.
D I think, possibly, you told me that you came out with the beat first. You had the role, you were playing around with the quantisation, the velocity…
O … Of these floor toms, and it created this kind of rhythm. It was almost a bit arbitrary, we were just moving around to form and create these rhythms that I thought sounded really cool and shifted them around in these repetitions and that was the inspiration, and I just mixed some guitars.
D I like that; it’s one of my favourite songs on the record.

How’s Death by Audio doing? Are you still taking orders despite the closure of the performance venue/ studio?
O Totally, the venue was closed so we’ve moved shop to some other place; we have another warehouse in Brooklyn. It’s going good, but it’s taken us a while to set up. But we’re set up and we’re building pedals and doing tonnes of that. But, it’s sad to have it closed because it was so amazing.

How do you translate an abstract idea such as sound into crafting something technical and tangible like the effects pedals that you make?
O All sorts of ways. Sometimes it’s abstract, sometimes it’s really specific. You work and find ways to make that happen, it can take months sometimes. You know, you’re experimenting, you hear sounds that you’ve never heard before, so you turn them into things and see what they can do, and that comes up with effects!

Courtesy of Soundscape Records, A Place To Bury Strangers performed at The Bee on Wednesday 2 September ’15.