Fear is a feeling that most people tend to stay away from if they can help it. However, for many Malaysians, the adrenaline rush that comes with feeling frightened is sometimes too good to pass up. Usually we would have to wait until Halloween to find a good haunted house. We would line-up with our friends and walk through the dark feeling terrified. But tbh, if you’re a real thrill-seeker, most of these haunted houses would be made up of crappy décor and a few jump-scares by half-baked, underpaid actors/actresses.

So if you’re looking for that extra kick and don’t want to wait until All Hallow’s Eve, well, here it is! The team behind global escape-room game franchise, Breakout, just debuted the first immersive horror experience of its kind in Malaysia, Hauntu. What makes it so unique is that this haunted house is a blend of live theatre, role playing and storytelling.

It’s Malaysia’s first and only immersive horror experience, where guests take on the roles of characters in a story, interact with other characters performed by real actors and actresses, and make decisions that will affect the outcome of the experience. Bandersnatch much? 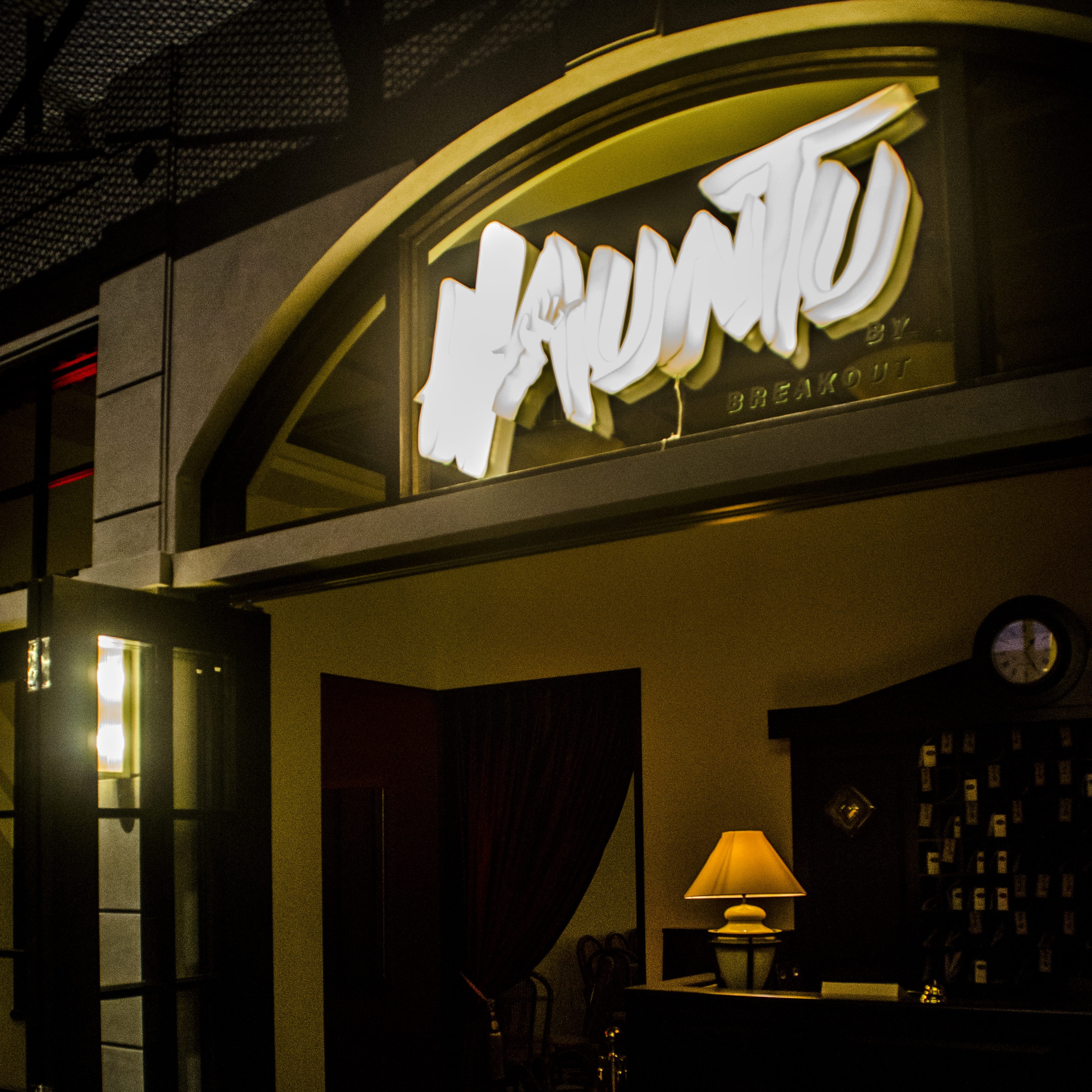 Last week, the JUICE team got invited to experience this rumah Hauntu and of course, we said yes! We made our way to The Linc KL and were greeted with a creepy hotel reception. We were definitely spooked and out of breath by the end of it. We were hiding, climbing, screaming, running, basically every kata kerja out there..

Without revealing any “spoilers” after going through the whole immersive experience, here are five things you can expect at Hauntu: 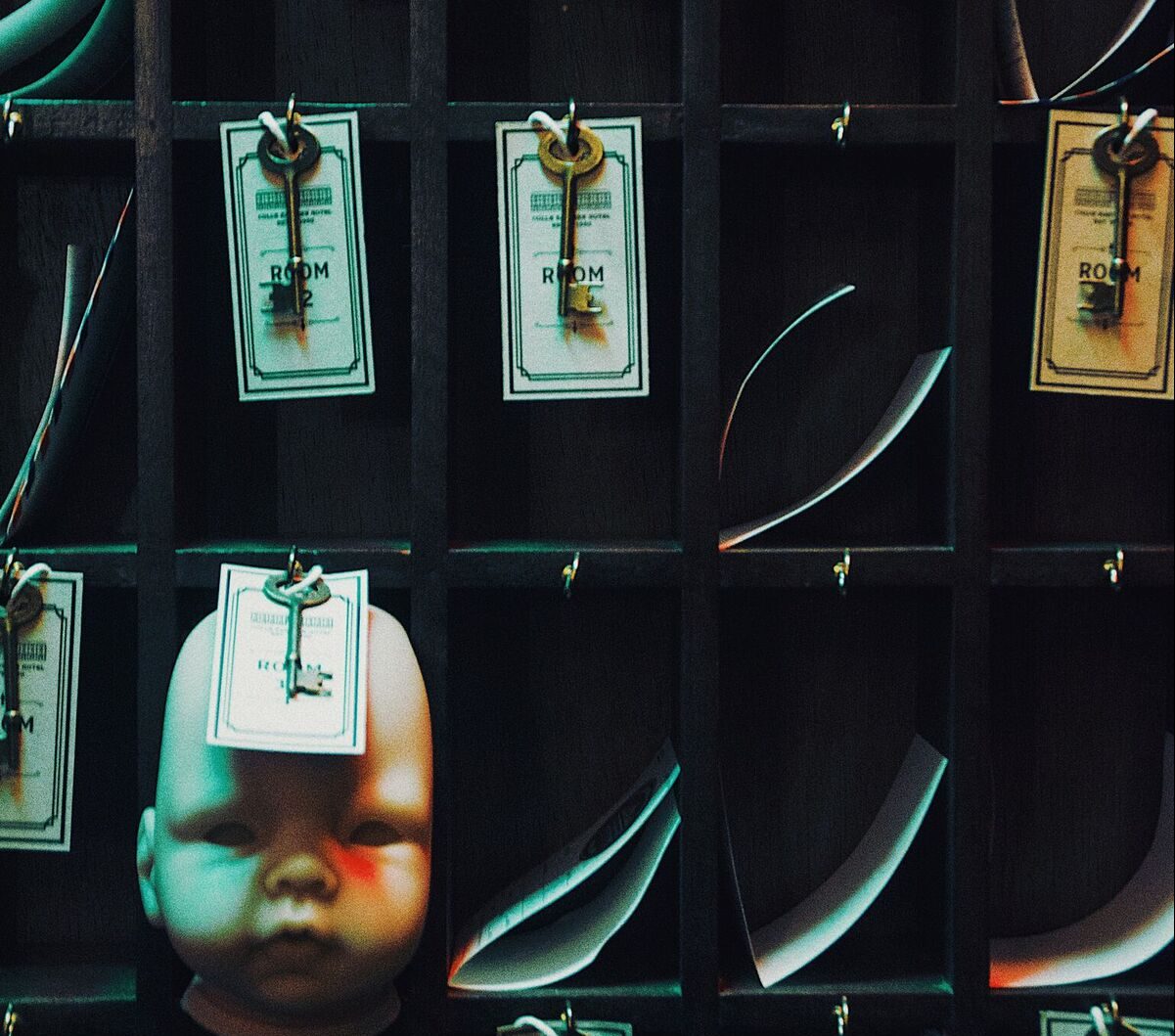 The key word here is ‘comfort’. Make sure you wear your fav sport shoes and sweat pants, cause you’ll be climbing and crawling… while being chased! So don’t show up wearing heels or skirts. The haunted house is very much like a maze, so get ready to run at times and don’t be scared to open doors. 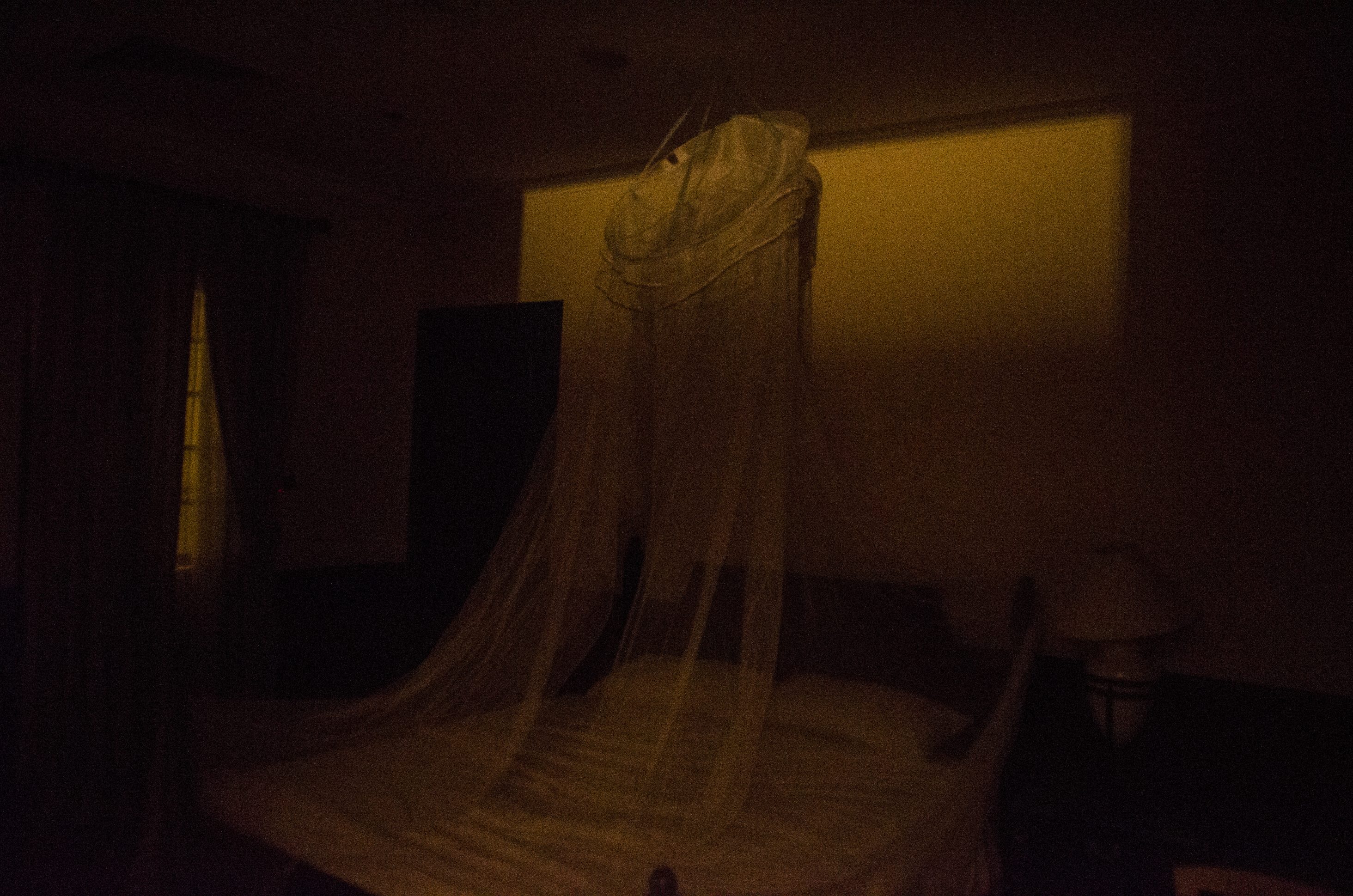 Although Hauntu is founded by the guys who brought Breakout (where you have to solve puzzles and riddles to escape) to KL, Hauntu is simpler than that. At some parts you will need to use some detective abilities, like finding hidden stuff but that’s it. Just make sure you listen to what the actors and actresses say and play along to complete the “mission”.

3. For a heighten experience, try acting the part too 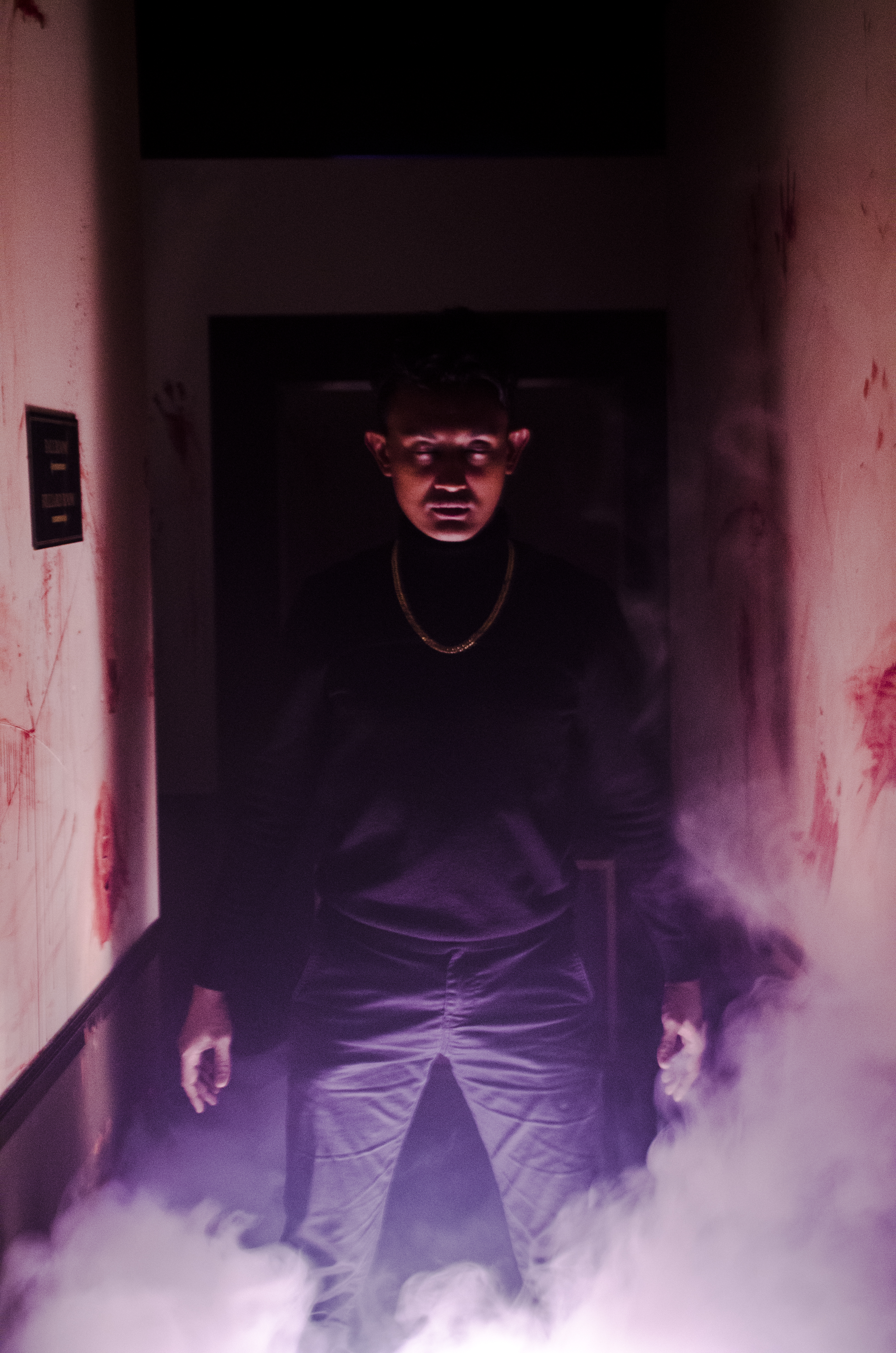 A cast of 6 to 10 actors and actresses who are integral to the theatrical storyline will perform in full costume–bellboys and chambermaids among other characters–ensuring that each guest in each story has an authentic and eerie experience. So to make it feel 100% real, just act the part! We know you’ll be scared, but trust us. Once you immerse yourself as a character in this cerita hantu, the hired cast will give back twice the energy you give. Baru syok!

At the moment, Hauntu have just launched and its storyline is at Episode 1: The Thief. That doesn’t mean you can’t start with Episode 2 when they release it in a few months, it’s just that it’ll be nicer to play all of the Episodes in sequence to engage in an epic storyline. You won’t be in the dark if you skip Episodes, however if you play the same Episode more than once, you’ll probably see some stuff repeated.

4. Pay attention to the storyline

Once you have “checked in” to Colle Eastern Hotel (a hotel constructed in the architectural style of British colonial buildings of Old Malaya), that’s when the fun begins. For now, it’s only at Episode One: The Thief, where you’ll be playing a member of the notorious Harimao Gang, there to pull off a gold heist in the hotel. As the heist goes on, it descends into a nightmarish journey of unexplainable events with severe consequences for each member of the gang. Don’t close your eyes and pay attention to the all the décor and challenges as the story unveils.

Usually when you go to a haunted house, it will stay the same. Most people would just pop by once, and they’re done. At Hauntu, they will be changing episodes every few months. The story of Colle Eastern Hotel is spread out through three different eras–the 1950s, the 1990s and the early to mid-2000s–which will be told in 3 different episodes. So once you finish one episode, you can come back and experience the continuation of the story, soon. Imagine it being like a cliff-hanger, you would want to come back for sure!

An episode can take about an hour to complete, with a group of (maximum) 10 pax or as a single player. Don’t worry if you can’t find 9 other people to join you, as you can join other groups at the venue–the staff there will sort you out. Or if you’ve got the balls for it, you can enter alone as a single player. Welp!

Hauntu is open daily from 11am to 11pm (last admission is at 10pm) and is located at the second floor of The Linc KL. As for the admission fee, it is priced at RM58 per person and it’s definitely worth it. So get your horror-movie club together and get ready to experience a rumah hantu like no other!

For more information about Hauntu, visit their website by clicking, here. 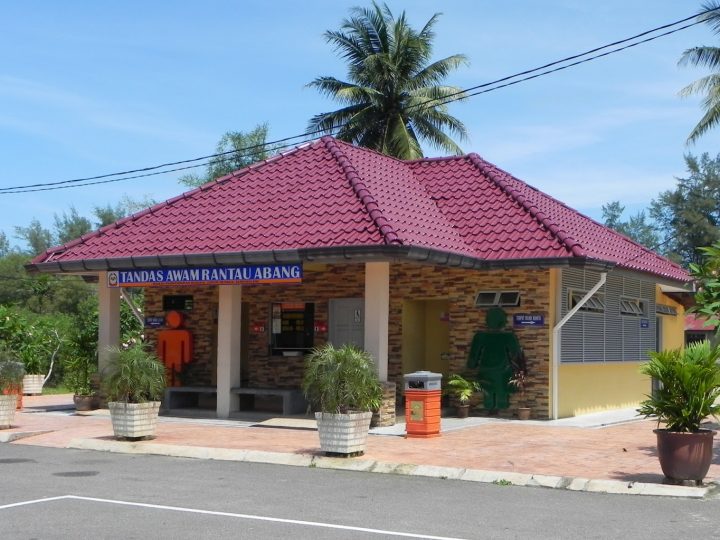 Hopefully this will start a trend..