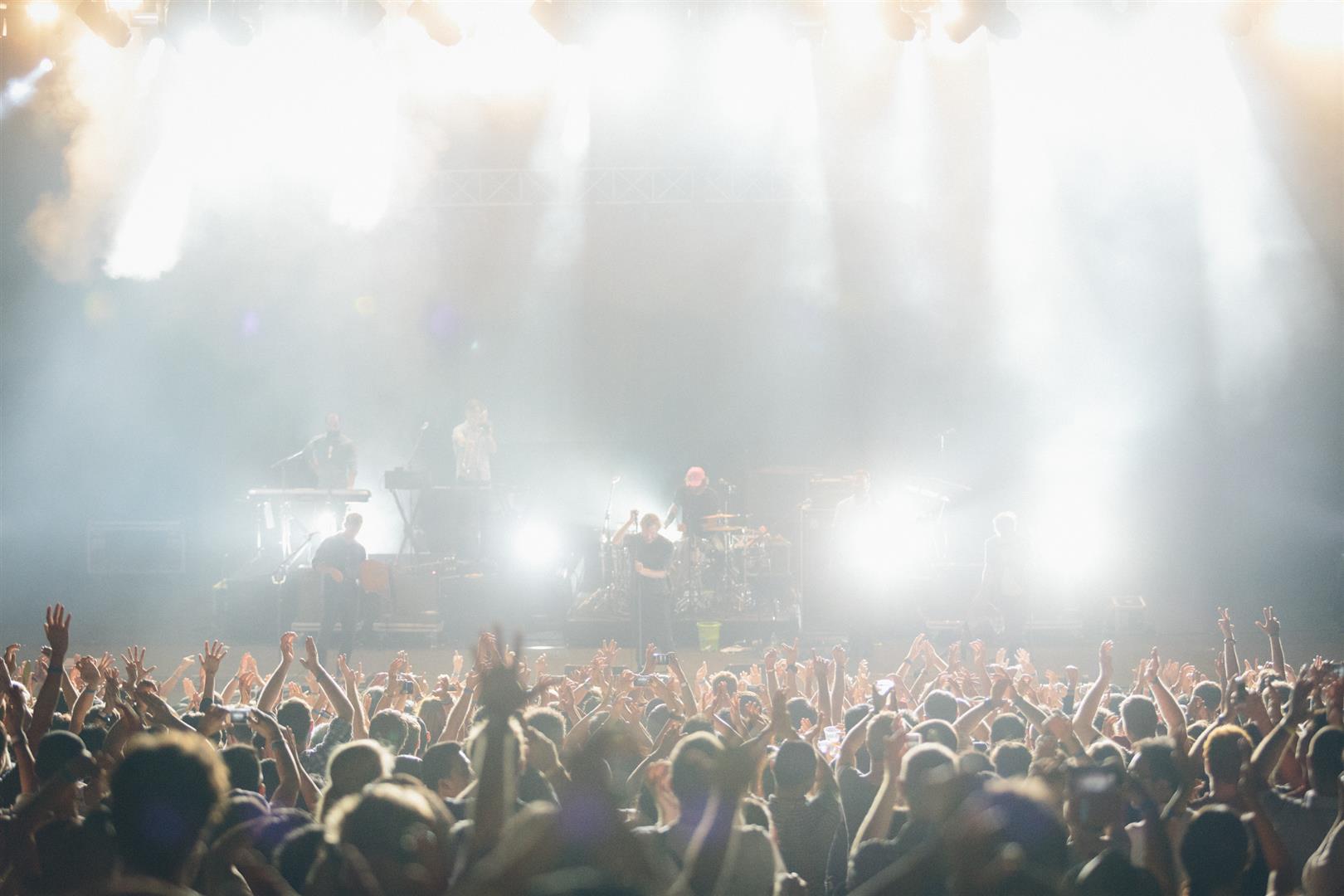 The inaugural Hostess Club Weekender in this part of the region sees them occupying the space formerly claimed by Laneway Festival Singapore; Fort Canning. A sensible decision, considering the smaller scale event, a fact made ostensibly clear when opening act Buke & Gase performs to a crowd capacity that can be best described as a rather large family picnic. Still, the female-male duo gives their all to the performance despite the heatstroke-inducing sunrays streaking their visage – glimmers of sweat prisms were visible from where we are standing. Sort of a noise-punk-pop doodat, the Brooklyn band plays their set with bespoke instruments that include the trademark bass-guitar hybrid and six-string former-baritone ukulele with aplomb (amazingly keeping their rhythm despite simultaneously playing with the bass drum), seemingly converting the heat of the sun like sweat-covered, solar-powered homunculus. Iceland’s next biggest export Ásgeir takes up the stage next with a performance that borders the line between Bon Iver and Sigur Rós, sans the Hopelandic and Justin Vernon’s sad axeman countenance.

In the evening, the precocious King Krule begins the final bracket of performers. Up close he is a walking mass of unsettling, disparate elements. Ginger hair clashes violently with the sky-blue puffer fish headgear he has on; a rusty, hoarse tenor clashes violently with his rather spindly, pale 19-year-old frame. But he is an assured performer, constructing elaborate blues-tinged soundscapes in the face of a rather aloof crowd. ‘Noose of Jah City’ sees him ditching the rusty-red Fender to bob and weave on the stage, elaborate headgear jauntily bouncing. Finally the crowd gets up to have a bit of a dance. As dusk falls, Mogwai takes to the stage. Five burly men with guitars, dwarfed by huge amps, standing tight in the small bits of stage not covered in pedals provides an idea of the immensity of sound forthcoming. While playing mostly tunes off latest LP Rave Tapes, there are surprisingly selected songs from the Mogwai-scored French TV series Les Revenants as well. With everyone referring to the event as ‘The National’, it’s not a surprise that the Ohio natives play the headline slot. As is everything on the little island which could, conditions are unnervingly immaculate. The stage is tucked neatly in a corner at the bottom of a grassy basin. The gradient gentle, the sky amber, and the fire exits accessible. When they finally walk in from stage left, it is single file and on time, workmanlike. There is earnestness to fans of The National that seems almost visible when in assembly. In a crowd of shiny young things all primped and plucked, it is slightly incongruous like a punk Anarchy button pin crooked on a Ralph Lauren oxford. Vicariously living or viciously lived, the throng erupts in primal rapture as the bearded frontman makes his first sheepish eye contact, his men at the ready. It begins. Over the precise drumming and recurring guitar motif of ‘Don’t Swallow the Cap’, his baritone is stereo, scratchy, and calloused and warm. The National makes music for aged innocents, wide-eyed and seemingly without artifice. In lesser hands, such subject matter would make for forgettable results. But these songs are an arcane art, almost devoid of hooks, relying instead on orchestral composition and the listener’s patience.

On stage, Matt Berninger’s hirsute waistcoat clad form is the physical conduit of the performance. He seems to be in possession of the same tortured physicality as a lead in a Shakespearan tragedy, caught between the twin sceptres of past and future. Whether punching both fists together as if they could spark or beating his chest with the microphone or dropping to his knees to bark a particularly compelling lyric, he is gloriously atavistic. A substantial time is spent tussling with the telescoping clasp of the microphone stand. Defeated, he tosses it over a shoulder. There is no evidence of the polished sheen one would assume of an artiste with a 15-year career. Later, with an almost childish naiveté, he walks into the crowd unaided. Separated from his microphone and lead almost instantly, he peers through watery eyes, submitting to the tactile tide. 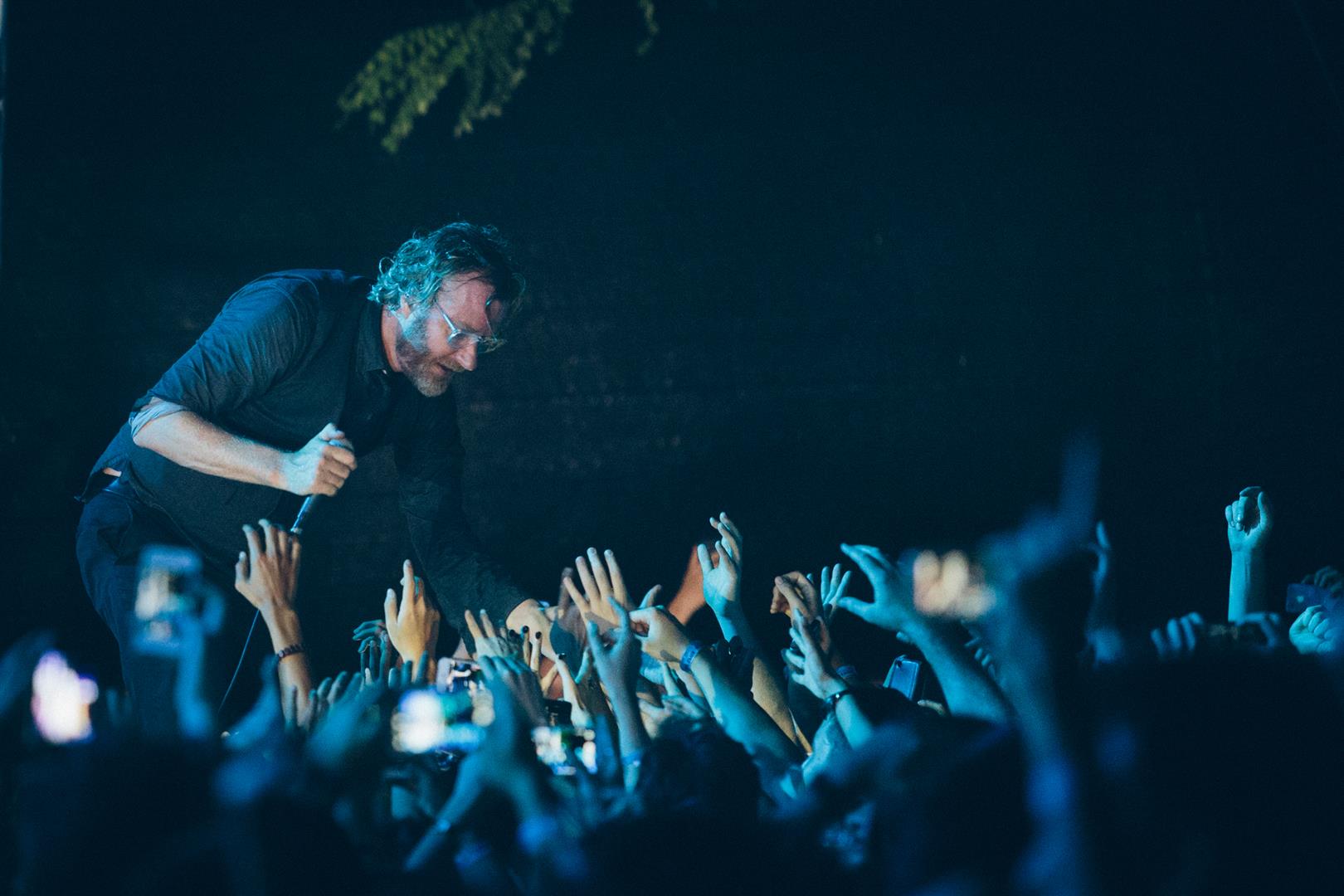 The lyrics have always read well. Live however, nuance pool in in each syllable giving context to the hyper-literate composition. The accusatory refrain, “You should know me better than that,” is equal parts resentment and juvenile sulking, “I have only two emotions: careful fear and dead devotion, I can’t get the balance right,” is bitter with self-loathing, “Jenny I am in trouble…” is almost sighed and the crowd swoons in complete thrall. The intricate music of their studio albums is competently translated in this setting. Bryan Davendorf’s propulsive toms drive ‘Squalor Victoria’ onward, giving it form and movement. The guitar riff heralding ‘Sea of Love’ sounds full and exuberant in a way that the studio version fails to.

The set closes as customary with an acoustic ‘Vanderlyle Crybaby Geeks’. Doing more listening then singing, Matt Berninger’s eyes are closed. Perhaps this has always been the way it is meant to be performed, maybe the words aren’t didactic but self-directed.