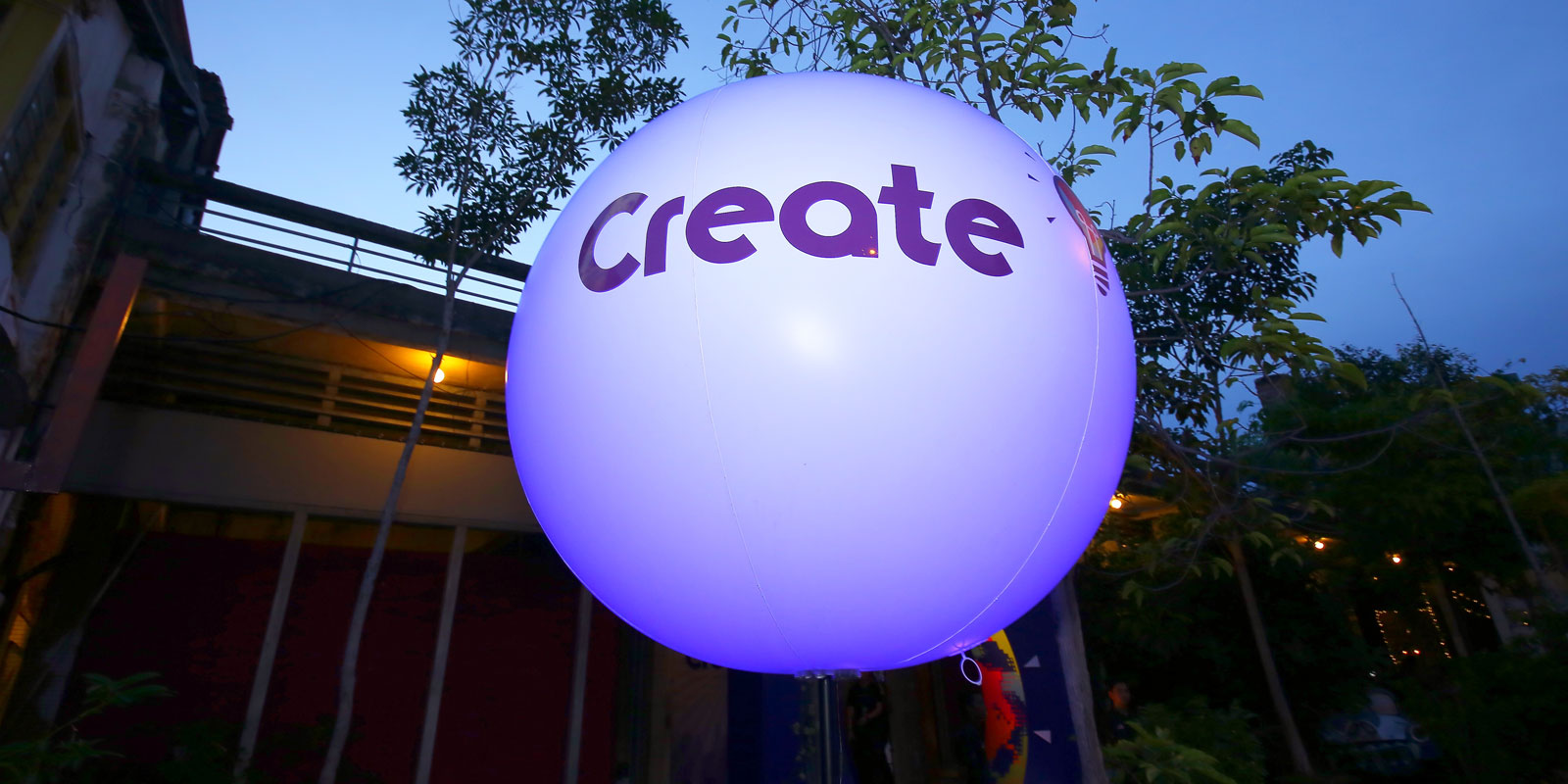 Last 28 May ’16 at Hin Bus Depot Art Centre, ‘crowd creation’ wasn’t just a buzz phrase used to capitalise on Penang’s increasing stature as Malaysia’s centre for culture and arts, or even to pander to the island-state’s innately creative inhabitants. The inaugural CREATE – a first of many artistically-inclined and crowd-driven festivals to be held in Penang – proved to be a worthwhile addition to the island’s canon of creative events that saw The Creators Project covering Jun Ong’s massive light installation for UrbanXchange and Lonely Planet naming Penang as Southeast Asia’s #1 culinary hotspot.

With the former bus depot – now event space-cum-art gallery – transformed into a crowd creation playground, there were naturally a number of activities punters could get involved in. First of which was the #mashtag wall where seemingly random words (plus emojis and the event’s official hashtags) were emblazoned on removable blocks; guests were invited to rearrange them in any way they saw fit – so you could imagine the hilarity that ensued when the more humorous of the lot had their turns. Though officially, the event challenged them to come up with inspiring sentences, the best of which was rewarded with a The Swagger Salon voucher worth RM200.

Then, there was the physically demanding Crowd-In-Motion challenge that had five stationary bicycles attached to a large LED screen, which displayed a retro-style modern game that required guests to cycle in tandem in order to win hourly rewards. This included winning drink coupons, unlocking beers for everyone at CREATE, and ultimately, a performance by the headliners of the festival – Singapore’s pop band The Sam Willows.

While unlocking the headlining act does seem like a tall order, it was really the 8x12ft CollaboArt Wall that was emblematic of CREATE’s ‘crowd creation’ ethos. Inviting Penang’s pride, The Swagger Salon founder Yung Shen and DJ-producer Ramsey Westwood, to contribute to the wall by having their favourite aspects of the island included in the finished – though uncoloured – artwork (this included anything from Hokkien phrases ho chiak and cha boh to Swagger Salon’s flagship store), punters were all then encouraged to add their own input by either colouring the art or even adding other elements to it by drawing new Penang-centric curios onto it, making the colouring wall their own representation of Penang.

In the midst of all these activities, festival staples such as food trucks and stalls were present – particularly of interest was CREATE’s own ice-cream potong that featured cherry and mint flavours as well as a combination of both. But hey, this was a festival, music was the most important staple. With a curation that saw local live acts in bar band The Backyard Buskers, acoustic doyenne Talitha Tan, and pop kings Paperplane Pursuits, and dance DJs in CollaboArt contributor Ramsey Westwood and Alexis G, there was never a still moment during the event. Especially so when the crowd unlocked The Sam Willows, whose YouTube popularity undoubtedly translated well in real life. The event didn’t end after their performance though, and even the unexpected rain didn’t hinder CREATE from continuing on either. Instead, Alexis G’s closing set was greatly aided by it as punters filled up the CREATE Stage, seemingly turning the event into something of a mini dance festival.

As communicated to us, the first CREATE festival here only acted as a preview to their upcoming events happening some time in the offing, which promise to be a substantially larger affair. If how much fun we had here were any indicator, we’re sure the next one is going to take the cake.

But hey, don’t just take our word for it. Watch the video below to see what the crowd had to say about CREATE:

CREATE went down on Saturday 28 May ’16. For the full photo gallery, click here.

Keep yourself updated with future CREATE events via www.create.net.my.

Read our interview with Yung Shen and Ramsey Westwood here.