With many millennials now in their late 20s and early 30s, we’re officially adults gais, eeep! But sometimes, it still doesn’t feel like we’re doing this adulting thing right.

In this episode of SAYS Cakap Banyak, we sat down with property YouTuber Sean a.k.a iherng to discuss some adulting struggles. Watch the full video below:

So first things first, what was our first #adulting moment? ‘Cause ya know, it’s different for everyone.

Riyal: “What about you Sean? When did you realise that ‘Okay, I’ve gotta do some stuff now’?”

Gwen: “That one defining moment.”

Sean: “It’s when I moved out from my parents’ house. When you finally get to move out yourself, then you’ll finally realise that dinner don’t appear on the table itself, the clothes are not gonna wash itself. I think it’s the whole process of being accountable for your own being.”

Whether it’s part-time or full-time, there’s no denying that getting your first job is a big part of making you feel all grown up

Gwen: “And then I went into the marketing department for a little while, dabbled in that. That was hard to come by because that was like my first full-time job. I graduated uni, bummed for like four months, and then I have no idea how this thing just like flopped on my lap. And I was like ‘oh thank God’! This place was 40 minutes away from where I live, but I’m just gonna take it because I need to pay bills!”

And then there’s that thing that all Asian aunties just loveee to constantly nag about: “When you getting married ah?”

Sean: “It’s not a competition.”

Of course, buying your first home is a HUGEEE #adulting moment! From the finances to the commitment, it’s also probably one of the things that scares us most.

Riyal: “And it’s not like you can leave, you’re stuck there for 30 years, right?”

Sean: “And that’s the worst part.”

But thankfully, there are now all sorts of schemes and campaigns to help first-time home buyers.

For example, EcoWorld’s #InstaYours, where you can stay in your selected property for up to five years before deciding if you wanna buy it.

Sean: “But then when this product came out, so you get to lock a price down today, and you’re gonna test stay for the next five years. So, you can actually decide whether you want to buy this (home) or not on the fourth year or the fifth year.”

Riyal: “But are these (homes) already made?”

Sean: “Yeah, already made. So, you get to move in already.”

#InstaYours really goes a long way in helping to ease the fears of first-time homebuyers, especially when it comes to that big C word⁠—Commitment

Riyal: “So, a lot of people have this commitment issue. So, the problem is like you would go in but you don’t know if it’s a good home for the long term or not. (With #InstaYours), so you go in, number one, you get to test drive it. Number two, you already built that attachment to the house. So it makes it even more like…”

Riyal: *sighs* I didn’t find this when I was looking for a house.”

After all, buying a property isn’t just about those four walls that you’re gonna be living in. It’s about so much more than that.

Gwen: “It’s like about a community. You want a place to call home.”

VIDEO: We Hired A Personal Trainer To Help Us Hit Our Fitness Goals In 30 Days 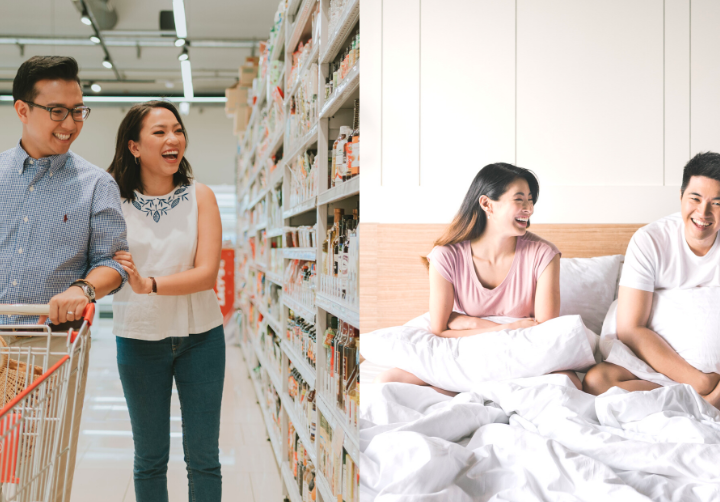 We’ll have what they’re having. 😍