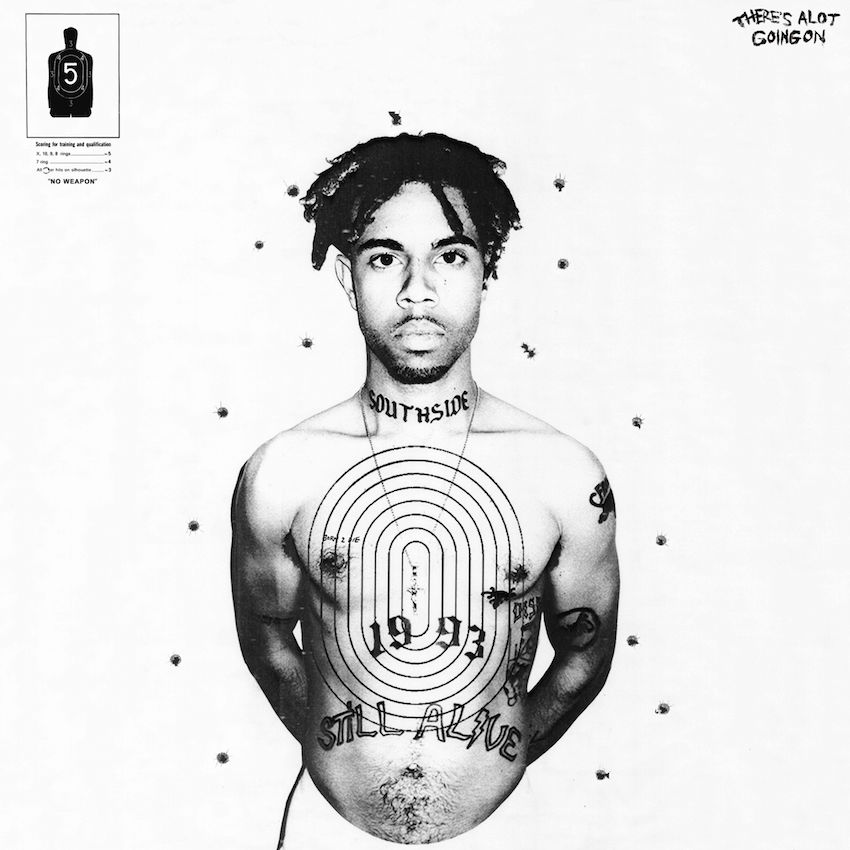 If this EP is any indication as to what to expect from Vic Mensa’s full-length album, it’s going down a promising direction thus far. There’s Alot Going On is essentially a seven-track music journal into the rapper’s mind. He confronts conflicts that have affected the community of which he grew up in as well as ones that stunted his mental growth. Sure, there are appropriate summertime tracks like ‘New Bae’ and ‘Liquor Locker’, but for the most part it’s political, imposes listeners to give it undivided attention, and most importantly, it’s passionate. He doesn’t sugarcoat his reality, which is despite being both uncomfortable and depressing, there’s optimism beneath the blunt candour.

‘Dynasty’ is a hat tip to Roc Nation, the label he’s currently signed to (“The Roc is still alive, throw your diamonds up again/ Yeah, I carry the Roc like a runnin’ back, hundred miles and runnin’ back/ Hov the president, he flyin’ private in Obama’s jet”), which sets the lyrical tone for the EP. A tone that can be playful at one point (“Young Muhammad in the ring with the power in my hands/ To defy the federation like Ali in Vietnam”), and frank at another (“After we build on existing structures, shift the culture/ Like George Bush searchin’ for weapons of mass destruction, think I’m ’bout to blow! But this ain’t the Middle East”). The track ends with a recording of a group of protesters chanting “16 shots,” which leads into the second track of the EP called exactly that. Here, Mensa relives the horror that was LaQuan McDonald’s death; the track fades out with a statement by the victim’s lawyer, Jeffrey Neslund, played over a bassline – the testimony, “Laquan immediately spins to the ground and the video clearly shows that the officer continues to shoot LaQuan, multiple times, as he lays in the street,” paints a clear picture of what happened the night LaQuan, a 17 year old black man, was shot to death. It’s enough material to provoke a sense of discomfort; enough to make a person question why these predicaments are cyclical and specific to the black community.

A question that the Chicago-based rapper ponders himself, like on ‘Dynasty’’s outro (“To the police, you can not kill me, if you want justice make some noise”) and ‘Shades of Blue’ (“And everybody broke so we in the same boat but would they let that bitch sink if we was white?”). The latter is also the song where he gives attention to the Flint water crisis (“Now you’ve got toddlers drinking toxic waste, while the people responsible still ain’t caught no case”), a subject he speaks out about often. His words are simple, but his message is strong enough to pull a person out of their bubble-wrapped world for half an hour.

When Mensa is not addressing social issues, he’s making peace with past demons. The eponymous track of There’s Alot Going On is reminiscent of Eminem’s storytelling method in the sense that the rapper’s vulnerability is painfully obvious (“I was really tryna fend her off but I ended up in the closet with my hands around her neck/ I was tripping, dawg, too proud to apologise or empathise, I blamed it all on her, saying that she hit me first, even though she was the one hurt”). By the end of it though, he doesn’t ask for a pat on the back for having overcome the aforementioned obstacles and admitting to his personal issues, instead he persuades listeners to learn from his mistakes, continue to strive to be better, and ultimately, to never stop believing.

Listen to ‘There’s Alot Going On’ below: