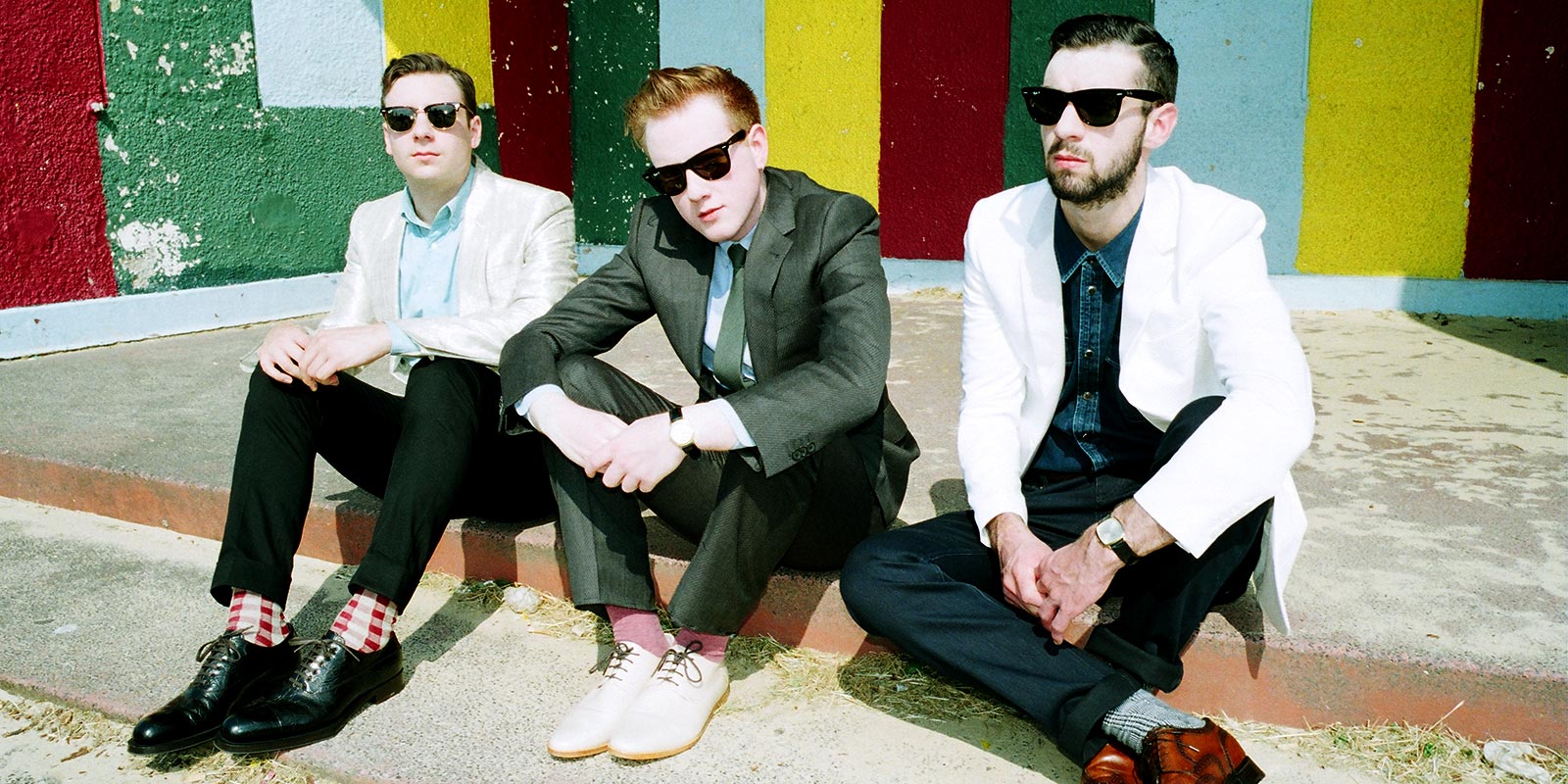 Indie music devotees went into a state of euphoria after Urbanscapes announced Two Door Cinema Club (TDCC) as one of its headliners in 2013. There was no doubt that fans of the band contributed a greater part of ticket sales. In the end though, the expected high-spirited ambience at Urbanscapes became a distant dream after the Northern Irish band revealed on social media — just one night before the show — that they were unable to perform in the caterpillar sanctuary (you’d understand if you were there) due to lead singer Alex Trimble suffering from acute laryngitis. The rejection said post had garnered went far past Dejected Ave., with TDCC fans requesting refunds from Urbanscapes and sharing melancholic stories of feeling unmitigatedly gutted that their opportunity to see TDCC live was taken away from them.

The over-dramatics were necessary, believe us.

It’s been three years and the wounds have yet to heal. Thankfully, Future Sound Asia found a window of opportunity for them to bring TDCC down for the return of Good Vibes Festival (GVF) – and it’s been a good while since Malaysia last saw a proper music festival to boot. Naturally, both despondent fans of the band and locals hankering for festivals to be a thing in Malaysia again had now become rather enthusiastic – cautious but still hopeful – making it the perfect instance for JUICE to speak to the band. It helps that after a four-year gap, TDCC is finally releasing a follow-up to their sophomore Beacon in forthcoming LP Gameshow (out 14 October ’16, Parlophone). With lead guitarist Sam Halliday on the telephone one early Friday morning, we discuss topics that aren’t particularly lighthearted – fitting, considering the album’s first single, ‘Are We Ready? (Wreck)’, is a declaration against consumerism.

2007 was the year the world was introduced to the first iPhone, witnessed Britney Spears’ mental breakdown, and also happened to be when Two Door Cinema Club was formed. A couple of years after deciding to pursue music full-time, TDCC released their first EP entitled Four Words to Stand On in January ’09 – recorded and produced by themselves. As with any band just getting their hands dirty in trying to mould their careers, the first few years were TDCC’s period to prepare themselves to ride the creative maelstrom that was heading their way.

A year later, TDCC released their track listing for their debut album, Tourist History (2010, Kitsune), in an interview with NME; three singles (‘Something Good Can Work’, ‘I Can Talk’, and ‘Undercover Martyn’) followed shortly after that as well as a performance of ‘What You Know’ on Late Night with Jimmy Fallon – a single that would become the holy grail of Tourist History. Their second studio album, Beacon (2012, Kitsune), cemented them as a band with genuine consistency as opposed to yet another buzz band waiting to be sucked into oblivion – they successfully avoided the dreaded sophomore slump cliché.

“I think time and distance from [the band]
sort of [made us] realised that the
things that were a big problem before
really aren’t a big problem, you know?”

In the subsequent four years leading to new album Gameshow, the band had endured touring the world together for a duration long enough to strain the three members’ relationship with one another – although, as anyone would feel after working in the conditions that they were in (i.e. not being able to sleep in the comforts of their own beds), it was evident that the band was very much in need of a break from the road and ultimately, themselves.

“We didn’t really speak [to one another] for a while, we just sort of got on with other aspects of life – just enjoying being in one place and finding some sort of routine. But I think people need to have a job, you know? It’s nice to have time off but you kind of get bored and kinda crave more. So, I think we all just realised [that] we’re good at this – there are parts that we enjoy and we needed to find a way to enjoy other parts of it. I think time and distance from it sort of [made us] realised that the things that were a big problem before really aren’t a big problem, you know?” Sam said – a statement that substantially proves the axiom of absence making the heart grow fonder.

“I don’t know if you call it bravery
or coming from arrogance (laughs), but Kanye
kind of does what he wants with himself.”

Sam wasn’t shy on elaborating the issues they were faced with during that time. “Just little things seem like a big deal, like where to do a show or what music video we’re going to do – just things that need three people to agree on,” he revealed, “I guess because we’re all so close to the band – every occasion we were all really involved in – which can be a good thing and can be a really bad thing because you know, if you’re all very different, like we tend to be, you can drag it in different directions. Sometimes those things don’t tend to be a big deal but when we’re with each other all the time, it is a big deal.”

Since acknowledging that there was more to their lives than juggling touring, songwriting, and the required promotional obligations – often an impossible task to accomplish when the mind is wired to hustle, hustle, and hustle more – the band has reached a level of zen now; Sam credited this to their progressing maturity.

The band had taken a two-year long break to create a routine that didn’t put them in the position of having to wake up in new cities every other week, and while it was liberating to be able to spend more time with their families and stay in their hometowns, they had to return to the studio eventually. Though, when that time came, Alex – the band’s main songwriter – found it difficult to get the ball rolling, and so he sought help from someone outside of the TDCC camp. No wonder then that influences for Gameshow’s content included anyone from Prince, to David Bowie, to Miguel, to even Kanye West, as revealed by TDCC’s bass and synth man, Kevin, in an interview with NME. Seeing as Yeezy and TDCC are quite the contrast, we just had to ask Sam how he inspired the band’s songwriting.

“I don’t know if you call it bravery or coming from arrogance (laughs), but Kanye kind of does what he wants with himself,” a point Sam and the band empathised during the recording of Gameshow. “Some songs don’t really seem to make sense – especially because I think we find ourselves adjusting into a pattern of songs structurally being quite safe and being quite similar all the time – I guess we found a formula that’s sort of easy and [it] worked.”

“[Bono’s] pretty annoying. That’d be
my first reaction. Quite painful.
But I’m sure he’s lovely,
I’m sure he means well.”

Forcefully moving ourselves away from gushing about Kanye with Sam any further, we delved into the meaning behind TDCC’s latest single ‘Are We Ready? (Wreck)’ – a song that expresses a deep anxiety pertaining to the overwhelming need of being connected vis-à-vis the growing concerns revolving around consumerism. Sam credited the song’s critique of materialism to the number of endorsements that were given to football clubs; “It’s just ridiculous now, they have corporate sponsors for everything. It kind of ruins the whole local community aspect to it and sports, and you feel like everywhere in the world now has McDonald’s and Starbucks and all that sort of stuff – it’s just getting to that point where you feel that in 10 years time, everywhere will have some sort of chain.”

Despite saddened by the ubiquity of chains and branding, Sam wouldn’t go as far as identifying himself as an anti-consumerist, stating that he picks and chooses what he does purchase since he himself owns a few (five to be specific) Manchester United jerseys. Yes, he acknowledged that this could come off as irony, but contradiction is a human right, so, who could hold it against him?

After scratching the surface of consumerism, we pursued a subject that would have greater economic impact – Brexit. What happened in the morning of Friday 24 June ‘16 basically turned the possibility of an economic meltdown in the next couple of years into a reality. Since Northern Ireland is part of the United Kingdom, which was tied to the EU but now no longer, we asked Sam which governance would be most ideal if his choices were between Theresa May’s or Sinn Féinn’s administration, to which he responded by saying that he’d like to go back in time before the call for votes came to play.

“We’re from Northern Ireland but we’re not fully Irish, it’s weird because there are now talks of to go ‘one’ with the United Ireland because of what’s happened with Brexit,” he relayed. “It’s weird because lots of times, you know, very political in terms of Northern Ireland politics, I’m not massively for or against like the whole Protestant Catholic thing that we have going on there. It’s quite embarrassing a lot of the time but it’s definitely a minority still, but yeah, not that I’m against being part of Ireland or anything but I think it’d be sad to lose Northern Ireland as a country because I feel like culturally it’d be very different from Ireland and very different from England or Scotland or Wales. I think for us to be a United Ireland would be sad – to lose your home country.”

Having inadvertently ventured into a conversation on the intricacies of Northern Ireland and Republic of Ireland’s relations, we just had to ask him what he, as an Northern Irish rockstar, thought of the global Irish ambassador, Bono of U2, who came from south of the island. “I don’t know him, but I don’t think he represents Irish people (laughs). I think he’s definitely on his own. Don’t think many Irish people are like Bono, no. Don’t think many people in the world are like Bono. I don’t know, he does a lot of good things… I don’t really know him. I don’t know enough about him, I’ve never been a massive U2 fan or anything, just probably [what] people would expect when they come to Ireland. He’s pretty annoying. That’d be my first reaction. Quite painful. But I’m sure he’s lovely, I’m sure he means well.”

Irish humour is as peculiar as their politics, it seems.

Performing on the first day of Good Vibes Festival ‘16 (Friday 12 August ’16), Two Door Cinema Club is one of the international headlining acts who will be rocking the stage at The Ranch @ Gohtong Jaya, Genting Highlands.

Gameshow is scheduled to be released on Friday 14 October ‘16 via Parlophone.