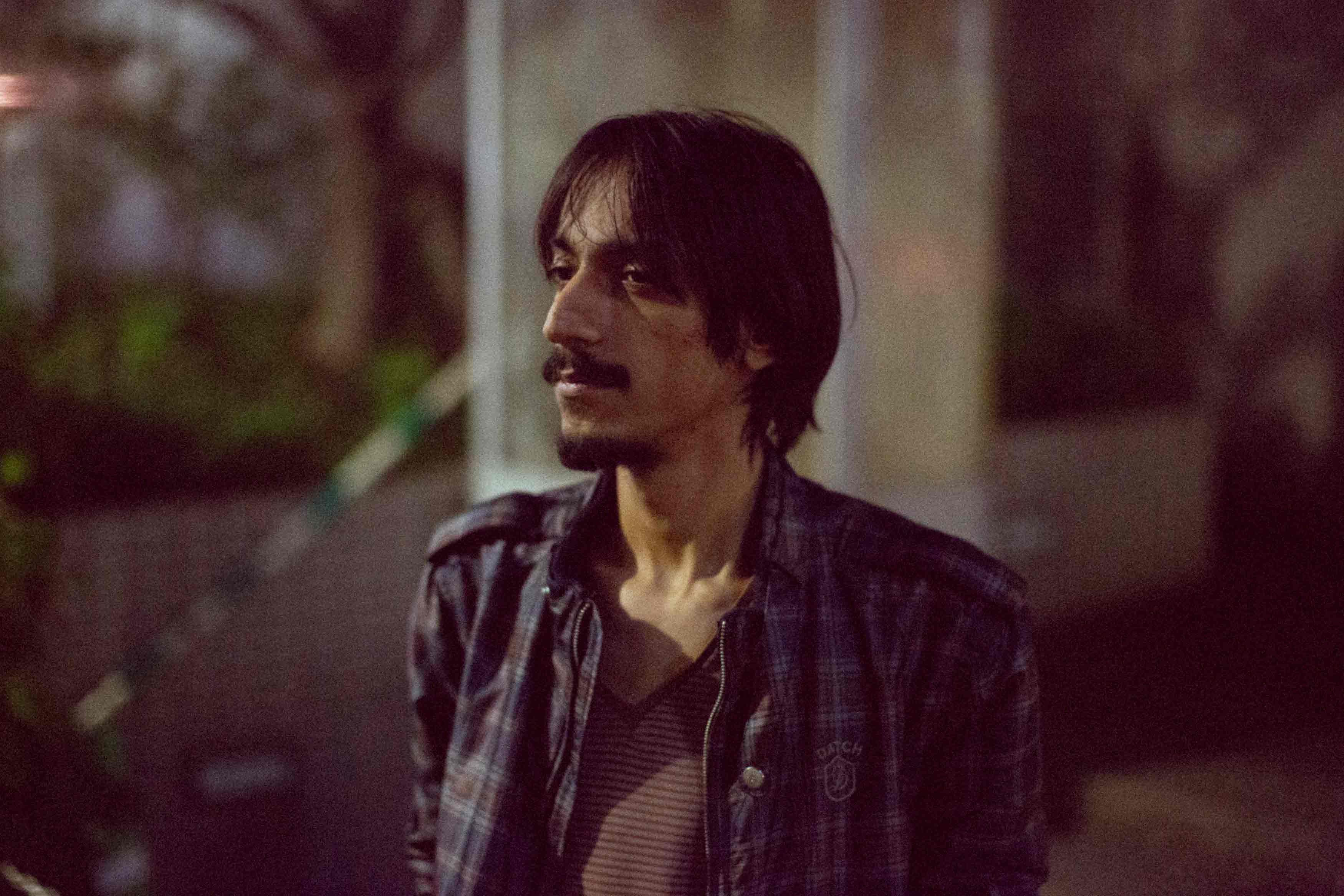 If Tollcrane’s words were to be believed, there isn’t much of an underground electronic scene in Pakistan save for what his collective Forever South has built in Karachi. Yet the country has one Red Bull Music Academy Tokyo alumnus to call their own in Tollcrane – meanwhile Malaysia has yet to produce a single student! Barging into one of the bespoke mini-studios at Red Bull Japan’s HQ while he was working on a track, JUICE investigates what it was like to be an electronic act with an affinity for noise and techno in a country that not only bans YouTube, but doesn’t even have clubs.

Most people wouldn’t know about Pakistan’s electronic scene…
There is a small but really eager scene in Pakistan. We saw that a lot of people were really getting into not-the-traditional electronic music. There’s electronic music in Pakistan that started way back; when we had raves, we had warehouse parties, we had stuff like these which have been going on [for some time], but the kind of music that was being played at these parties was very commercial, it was mostly CDs that you would find in like supermarkets and popular CD stores and stuff. You wouldn’t find intelligent music or good music or modern music out there. Slowly, we could see that a few people are getting sick of that, because it has been going on for 20 or something years and it’s still going on and there’s still some people who still stay in that scene. We’re trying to do something different now. There’s a few of us back home, we’ve formed this, I don’t know if you wanna call it a label or group or crew or whatever you wanna call it, [but] we call ourselves Forever South. There’s like whoever is a cool bedroom producer [in the collective]. Before that we started with friends first, we all were bedroom producers and we all like dance music and we all like dancing and we all like electronic music, so we were like, “Why not we just start a crew together? And we could start playing parties, start playing shows and stuff?” So, we had this start and we’re like, “Yeah, why not?” We got together, made a SoundCloud, made a Facebook, you know that’s how these things happen now. We threw our first official gig in 2013 – January. We kicked it off. We called it Revival, because it was like reviving the electronic music scene of Pakistan, if you wanna call it [a scene]. We started with Karachi first because that’s where we were from. And we will go to the rest of Pakistan later on, but we have to start somewhere, so we decided Karachi was it. And yeah, we had that show, we rented a warehouse and everybody got on. We had our teams and stuff, DJs and some guys played live. It was really cool.

Did the more intelligent side of electronic music only start recently? You mentioned that your first gig was in 2013.
No. For my first gig as an electronic musician, it was 2013, but I have been in the music scene for a while. I wasn’t into electronic music so much five years ago. I was in a band. I was into psychedelic rock, noise rock. I was making noise rock back home. I started with like garage-y psychedelic rock stuff and moved on to like noise shoegaze-y stuff… I don’t want to call it these things because these are our inspirations basically, but we ended up sounding completely different. But when this was happening, a lot of other guys were making hip hop and beats on the side. Seeing those guys make beats and stuff, I also got really into it. I got into making techno and stuff, some guys are making future bass and grime, and some guys are making chilled-out beats, hip hop and ambient electronic stuff. So there was a whole mix of electronic music – I wouldn’t say it was all dance-y. I’d consider two, three of us to be dance-y, but there is a whole variety of electronic music back home. We showcase all of that in our shows.

Five years ago you weren’t so much of an electronic act, what really inspired you to get into it besides watching your friends make beats?
Yeah, I wasn’t. You’re right. It changed for me, man. It’s a really weird story (laughs), because that thing that inspired me just disappeared from the internet completely (laughs). When I started digging more [into electronic music], I was like “Man, I need to go back to the website to see where these guys are!” And it was gone. There were these three compilations, they were called Pickpocket Compilations, Pickpocket Records or some netlabel called that. There were these underground European, Italian techno tracks, minimal tech, and like experimental techno type-stuff. When I started hearing that, I was like “Yeah, this is stuff I can dig man, this is cool stuff.” I moved on, like I heard Actress back then, I was like “There is something weird going on.” Because I love noise and I found that noisy elements when combined with minimal techno-y ambient stuff – this is on, this is my way. Yeah, I guess Actress really got me into making electronic music.

And then they banned it.
They did. I dunno if I would say I learnt all my production techniques from YouTube. It wasn’t all just production, man. Because in Pakistan, we don’t have music schools, we don’t have guitar teachers, we don’t have a lot! I learnt a lot of guitar stuff, a lot of how to fix my things… you know, everything! YouTube was there for everything. I wouldn’t say it was just for electronic music production because I have so many talented friends around me, sometimes I don’t even need to go to YouTube. But YouTube was my source when I was sitting at home, I was like “Oh, what do I wanna do for this?”, “How do I fix hi-hats?”, “What does this VST sound like?”, “What should I get?”, etcetera. That was how I used YouTube, mostly. But yeah, YouTube was a great help, and we still get access to it when we get VPMs and plug-ins installed, you have to work around it.

The internet helped a lot with your scene.
All of our scenes are mostly due to the internet because we don’t have releases back home, we don’t have a record label, we don’t have clubs or anything. So whatever we showcase, we showcase on the internet first and when people dig that, people listen to that, slowly we have a following happening for us. Because the last gig that we played, right before I came here, that was a pretty massive gig and also the best turnout we’ve had so far at a gig. Every gig the crowd gets bigger.

You mentioned that you don’t have clubs back in Pakistan?
We don’t. We either have house parties, like in basements and stuff, or we rent out venues and then we have to do it properly because in Pakistan, there’s a restriction on alcohol consumption, so you can’t have alcohol widely in parties. You need to have some sort of fun for people to enjoy, otherwise… We tried that, we tried one without alcohol and it sucked! Everyone was just standing there like, “Uh, what do we do?” We kinda learnt from that, like alright, these things can work in a different setting maybe. If you wanna play ambient music, maybe that works. But dance-y music, you gotta have some crazy people around, like partying out. So yeah, we rent out warehouses sometimes, or other venues – there are some underground venues that permit drinking alcohol and stuff. But coming from Malaysia, you must know this story man.

Sometimes, say they need fill up their quota right? Then they would raid the clubs (laughs). It’s random.
And it’s so weird because we have licensed booze shops back home, like you can get booze from a store but you’re not allowed to drink it.

Wow, they sell booze but you’re not allowed to drink it?
They sell it for non-Muslims. That’s what they say. It’s so weird.

It’s the same way in our country: They sell it to non-Muslims, but Muslims will buy it anyway.
[There’s] a loophole. Whenever they see someone, they’re like “Let’s catch this person.” And then people end up bribing them, it’s a corrupt system. Yeah, that’s the stuff we have to fight back home.

Malaysia does have clubs.
Oh cool. That’s a step up. Hopefully we will get there soon man.

Speaking of which, must be difficult to create a proper scene there without a proper venue for it…
Yeah, man. The biggest of our hassles is arranging a good sound system, and if you have a dedicated club with a sound system where you don’t need to get speakers in each time, get a sound guy each time to hook in different sound system up, we don’t get consistent with our light sound, nothing makes sense in the end right? Because if you have a club, you know the club’s sound, you just take your laptop there or your CDs there and you just play at the club right? For our gig, each time it’s a different sound guy, the board is different, our equipment doesn’t sound right, we have to sound check for like two, three hours before we start a gig. Yeah, it would definitely help if we had a club or something.

What about your followers? Are they actual fans of the genre or did they become fans after they listen to your stuff?
I don’t know. I have like (laughs) two, three hundreds followers on SoundCloud right now, I don’t know. My band following is way more than my electronic following, but slowly especially after RBMA, they’re like “Alright, he must be doing something right.” (Laughs).

Band music is probably bigger there.
Yeah, yeah. Band music was big. There is still that scene in Pakistan where people are like “Oh, electronic music is not made with real instruments.” You know? But it’s really changing, there’s a lot more, like not just our crew, but other people making electronic music back home, like there’s a whole scene. People are trying to do different things.

You came from a relatively minute scene, what about your application, you think, attracted RBMA?
Oh, I just sent them a 40-minute mix of my own tunes man. I have been producing tunes but I never DJed my tunes ever before, so it was my first attempt at DJing and I DJed all my tunes into one 40-minute long mix and I just burnt it into a CD and mailed it to them with the application form, I filled out the 50 questions.

Were your answers extensive?
I took a while to fill up the form. The thing is, a lot of people really wait for the last moment to fill it out – I didn’t do that. I filled it out way early, like I sent it way before the deadline. It’s just ‘cause I had, not a lot, but I had some free time on my hands, so I would say I gave the application like a month or something to fill out with the music and everything. I guess like investing time helps, but the Japanese guy who just got in, he filled his out on the last day, so you know (laughs), I can’t even say what is the right way to do this.