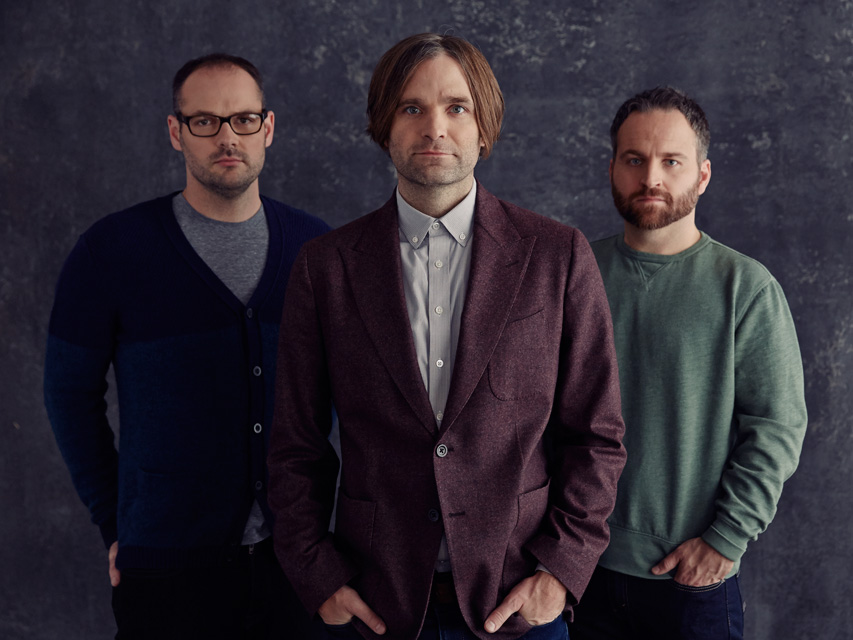 Did you know that Death Cab for Cutie got their band name from the namesake song by ‘60s English trad jazz and psychedelic pop band Bonzo Dog Doo-Dah Band? In an interview with Time Out Chicago, lead Ben Gibbard said, “The name was never supposed to be something that someone was going to reference 15 years on.” Whilst it’s been more than 15 years later, but there, JUICE has broken the stride. Not only that, we have also spoken to bassist Nick Harmer and drummer Jason McGerr about being in a band that is almost old enough to vote (and vote yes, it shall!), one that is the Leonardo DiCaprio of the mainstream music industry, and one that has named their latest album after a broken pottery art in Japan.

Death Cab for Cutie’s latest and eighth studio album is named after Japanese art kintsugi. It involves fixing broken pottery with powdered gold, and holds the philosophy of treating the repairs as part of the history of said object, rather than a means to hide the breakage. How would you say such an album title, and the philosophy the name holds resonate with the tracks you put into the record?
Jason McGerr Nick (Harmer) found a video on kintsugi online, maybe six months prior to us really getting into the recording process. I don’t think we were even thinking about the album title at the time.
Nick Harmer We never pick titles for our records before we go into the studio. We just kind of record everything and when we’re done, while we’re figuring out the sequence of the songs, we start to think about what we’ll name the album as we listen to the tracks. We were kicking around with a bunch of ideas for names and Kintsugi was one of them. I just like the philosophy behind it; the notion of not going out of your way to repair something perfectly, but instead let the flaws be a part of it… There’s something beautiful about finding new beauty in breakage and fractures and all that. We were all kind of looking for a way to sum up this album and the experience of it all, and I think that the word just fit that concept, and certainly resonated with us the most.
J Once it was brought up, it made a lot of sense as a metaphor for everything we have all been through in the last year, especially knowing that we were going to be moving forward without Chris (Walla).

Speaking of Chris’ departure, how has the creative process been for this recent album, after he left the band?
N Well, Chris actually made this whole album with us, so the creative process was actually fairly similar to how we’ve made all of our previous albums. It wasn’t until we were halfway through making this record that he told us he wasn’t going to continue on with the band. We still managed to finish the album with him and Rich Costey, the producer for Kintsugi. In fact, I think it’ll be interesting to see what the next album will be like without Chris! Beyond the live shows and adding new players for our tour, the shift in the band hasn’t really happened yet. It will be what we do next in the studio, and who we do it with. So, we’ll see.

How do you think Death Cab For Cutie’s music will change then?
N Chris is a great guitar player, and he always has a lot of interesting ideas for our music arrangements. It’ll definitely be different now that he’s gone. He has certainly brought a unique creative energy to our band. We will never able to just swap that out and replace it. However, our band has always been about finding good chemistry with other people as well. So far, we’ve already developed sturdy long relationships with the two players that are in the band touring with us now, and I don’t think we’ve ever been so reinvigorated and excited to go into the studio next with the new musical ideas and the new approaches we have in our heads. I’m not foolish enough to say that it’s going to be the same, but I’m fairly confident and feeling really optimistic about what’s to come.

Kintsugi was nominated for Best Rock Album at this year’s Grammy Awards, though it lost the title to Muse’s Drones. Still, it tallies things up to eight Grammy nominations in the last 10 years!
N It will always be an honour to be nominated for such a ubiquitous and popular industry award. It’s important for any industry to have its sort of ways of rewarding and awarding the people. But personally, I have always felt the Grammys tend to skew a little bit more towards pop and a little away from the stuff that is really meaningful. When we formed our band, we have always felt like we kind of exist outside of that kind of mainstream acceptance. The notion that we would even be in a band that would even be nominated or considered for a Grammy… it was hilarious to us when we started the band. The Grammy has never been a marker of success or failure for us. Like, if you don’t have a Grammy, it’s not like you’re making bad music, or if you do have a Grammy, somehow, you’re making better music? I mean, David Bowie never won a Grammy. Not to say that I’m comparing us to David Bowie, but there’s a lot of attention placed on it unnecessarily, and I think some people get caught up in the significance of it all in a way that is not something that’s ever concerned us. If someone called me today and said, “You guys won a Grammy!”, would I be happy? Of course, that would be exciting, because I understand what that means to the world at large. But in the same way that when our manager called us and said, “Ah, you guys didn’t win again”, which at this point, you’re kind of like, “Who cares?” We’re still making records, and we’re still going out into the world. Death Cab For Cutie will have been in the music scene for 20 years next year. Over the two decades, you’ve each formed bands on the side, such as All-time Quarterback and The Postal Service. Unfortunately, none of them have made it as far as Death Cab has. Reaching this 20 year milestone, what would you say is the DNA of this band that made it something you’d want to come back to from the side projects again and again?
J It’s the best one (laughs). I think everything we do outside of this band just tells us what we have together as a group with Death Cab. Everything else is very short-lived, but this is primary, and this is the focus. I don’t think there is anything that could ever pull me away from what I have with the people in Death Cab.
N Our friendship even goes years before we were in the band. I was roommates with Ben (Gibbard) in college, and I was in another band with Jason before Death Cab, so we have a deep, deep history. They are like my brothers as much as they’re my bandmates. They’re like family, and family always brings you back. You can’t keep away from that.

Twenty years in the music industry does equate to a large back catalogue. Do you ever go back and compare your songs when recording a new album?
N We check in every once in a while, but we’re definitely not interested in necessarily repeating ourselves. If there’s one thing that’s refreshing when it comes to working with Rich this time around, is to not overthink things. Back when we were working with Chris, we were always so eager to not repeat ourselves ever by any means necessary. We’d be like, “That feels a little too similar to this other thing that we did, let’s not do that.” But Rich would step in and say, “I never made any of that music with you, I don’t know what it sounds like. I don’t care, this sounds good to me this way.” So, it was really great to get out of our heads a little bit, and kind of release ourselves from our back catalogue. It’s your best friend, and it’s kind of a blessing and a curse.
J It goes with the whole “just be yourself” mantra. I think that bands that try really hard to make a record outside the box, a record that’s completely different from anything they’ve ever done, it will still sound like that band. The apple doesn’t fall too far from the tree.

How about when you come up with a set list for your tour? How do you decide which classics to play with such a huge back catalogue to look into?
N After doing this for so long, we kind of already know what songs are more popular from our old records. You can go back as far as Transatlanticism and know what songs people will always request for on Twitter. We know that in certain areas a lot of people have heard ‘I’ll Follow You Into The Dark’, so we probably should play ‘I’ll Follow You Into The Dark’. Those kind of things. I think we’re pretty well aware of the songs that really connect with our fans.
J We do try for every album to bring out what we think is going to be great live, and sometimes, there’s something we were really gunning for in the beginning that doesn’t seem to react the same way. So, through the back catalogue moving up to Kintsugi, it’s pretty clear what should be played and what shouldn’t.

Shall we be so bold to say, “Death Cab For Cutie, 20 more years?”
N (Laughs) It would be awesome to be a band for 40 years. That would be crazy!
J Yeah, it can happen. The fact that we’re this far in, in somewhere new and still being asked questions about the band and what we’re doing… I mean, I don’t care if we’re somewhere new, or just in the US, it’s amazing nonetheless that we can do this for this long, and still have places to go and people to see, and people still want to come to our shows. It’s pretty amazing that I’m able to hit things with sticks and make a living out of it (laughs).

Brought to you by Good Vibes, Death Cab for Cutie played at KL Live on Saturday 27 February ’16.