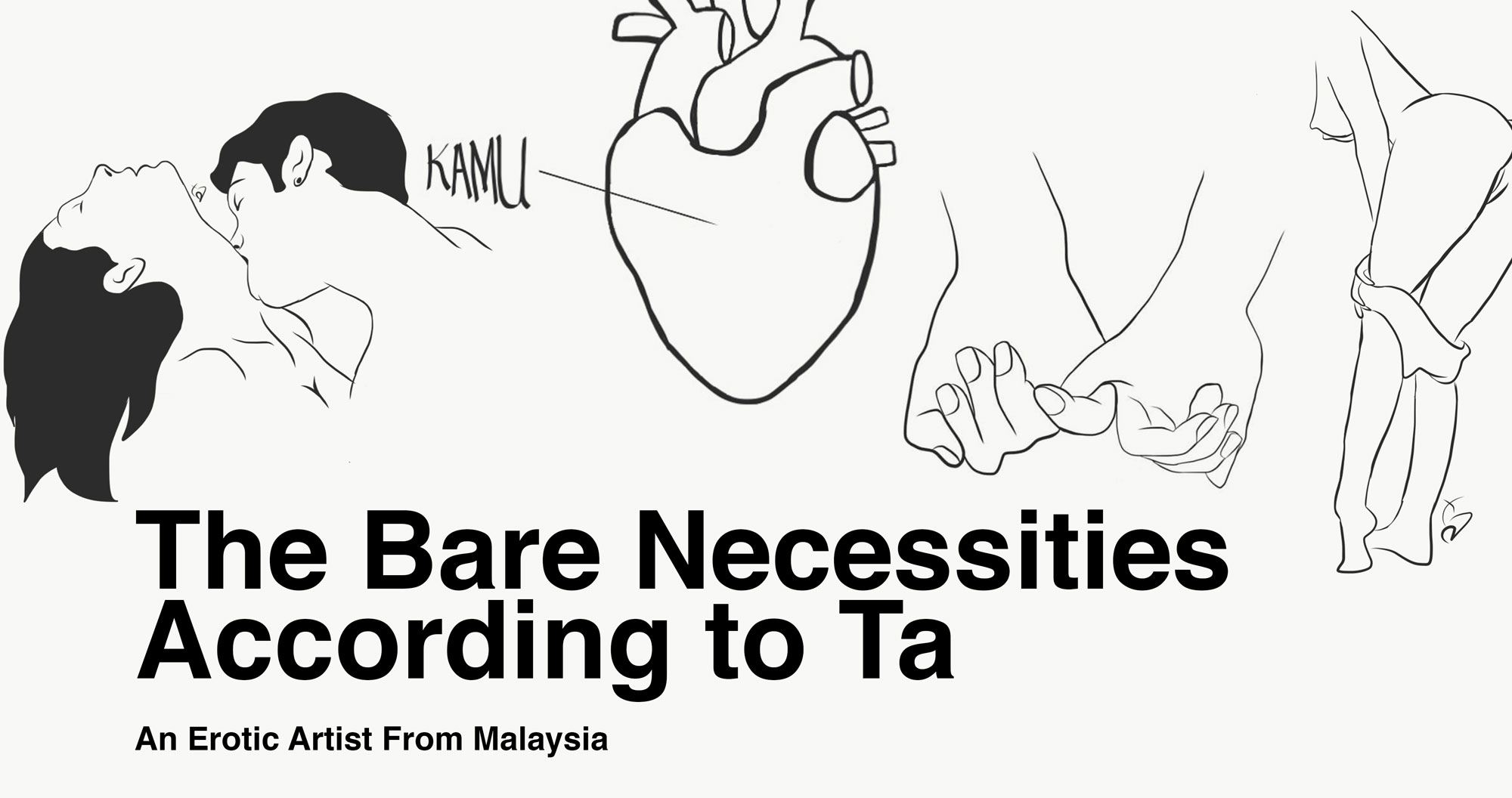 Instagram has been beneficial to its users for many reasons; to seek inspiration, to stalk, and to connect with fascinating people — like Ta. After browsing through the content of her social media profile (which we would not recommend doing while being in the office), we knew we had to have a conversation with her. Over email, we asked Ta what prompted her to delve into the world of illustrating eroticism while acknowledging that the subject is a risky one to express here in Malaysia. Ultimately, what she hopes to achieve through this style of art is to highlight subjects like patriarchy, body positivity, and maturity.

“I realised that [eroticism] is more than just bareness/nakedness.”

To start, we’d like to know why you chose to venture into eroticism? What about this style of art intrigued you?
Curiosity, for sure. Pada zaman dahulu, I didn’t see eroticism as a form of art (surprise!), it was mostly just a bunch of naked body drawings to me — I wasn’t making fun of it or anything, but it did make me feel uncomfortable. Then, curiosity hit me and I began to question how are these people cool with this much nudity and that’s when I explored eroticism the right way. I realised that it is more than just bareness/nakedness. Now, when I think of eroticism, I think of energy and that is powerful to me.

Art is a form of self-expression; what are you expressing?
Someone told me my work is lyrical, that it speaks about love and celebrates the human body and that is what I am demonstrating.

Why do you think these rules exist?
As cliché as it may sound, I blame the media for it. I am sure we are aware of how it has influenced our society — as in the way we view things or socialise with others.

“… [a] successful woman like Rihanna had her Instagram account taken away because she posted pictures that revealed her tits (it is always the tits!). But then it is all cool when a rapper has a bunch of women being their ‘hoes’ and ‘thots’ in a music video.”

How so?
For instance, when a woman is proud of their body like Miley Cyrus, all of the sudden it’s an “Ugh, cover your tits,” “We do not need to see your hair pits here,” or when a strong, successful woman like Rihanna had her Instagram account taken away because she posted pictures that revealed her tits (it is always the tits!). But then it is all cool when a rapper has a bunch of women being their “hoes” and “thots” in a music video. Do you see how many bullshit women gotta deal with even though it is about their own body?

The patriarchy struggle is real. So, what made you want to delve into art?
I have always been into art stuff but I was never one of those ‘art kids’ in high school because I never had the patience to do so. Even if I am drawing, I am probably really inspired or I just have too much free time in my hand which, is exactly how my Instagram account (@Buttsandloves) happened. I am very new in making erotic art, like if I were to describe where I am at, I would say I am still a foetus. Not kidding about that, I still have a lot to learn. I repeat, a lot.

“All I need is people to just stop misinterpreting what sex is.”

What are you working on achieving through you art? Do you want to encourage people to be more comfortable with their bodies, is it because sex is not talked about openly in Malaysia?
Hell yes to body positivity, but I am not trying to change anyone because I mentioned earlier, I do respect others’ opinions regarding a taboo subject like this one. But I wish people would take a step back and not freak out about it. Like, stop making a scene if you are not a fan. Same goes to the ones who are open about this sort of stuff, you do not need to tell random people who you just met (I have been this person many times) who you have had sex with or how much you love it. All I need is people to just stop misinterpreting what sex is. All I want from them is just to respect this sort of stuff, do you feel me?

“… learning stuff through pornography media is a nay.”

Yeah, we get that. As someone who produces erotic work, on a similar but far-ish note, how important do you think sex education is?
On the scale of 1 to 10, I’d give it a 7 or 8. Some may say providing sex ed may encourage kids to do it. That is partly true, but pretending to think they are not curious about it is dua kali lima sahaja. Because at the end of the day, they are teens/young adults, it is totally normal for them to be sexually aroused. We’ve all been there. I was already curious about it before I even hit 12 and thank god I had my first sex ed class back in middle school. Without sex ed, they would not know where to go to feed those questions they have in mind and thinking it is common to ignore that they are learning stuff through pornography media is a nay. So yes, I definitely think it is significant to have sex education programme for high school students and especially college kids.

Aside from uploading her illustrations on social media, Ta also prints her graphics onto tote bags and sells them at RM45 per piece. You can order one by sending her a direct message on Instagram @buttsandloves.