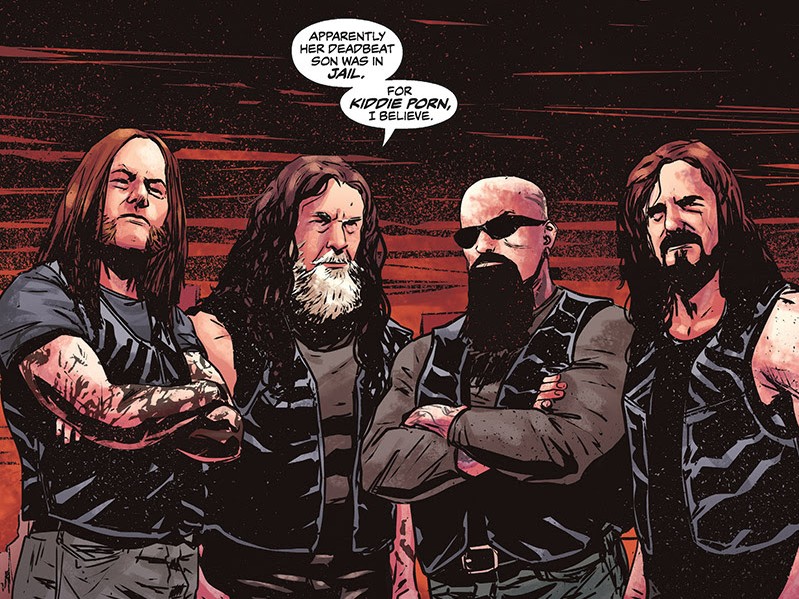 American thrash metal band Slayer teamed up with publishing house Dark Horse Comics (responsible for titles like Aliens, 47 Ronin, and G.I. Joe among the thousand others licensed properties) some time last year to bring the gore and grit incorporated in their twelfth studio album, Repentless, to print. The storyline for the comic though — also entitled Repentless — is focused on Slayer’s music video trilogy (‘Repentless’, followed by ‘You Against You’ and ‘Pride In Prejudice’), which played out similarly to a short film, only instead of giving the viewers closure, it raised more questions (why are the Neo Nazi dudes in charge? Why was the man with the eye-patch hesitant to slit Danny Trejo’s throat?). Questions that will probably be answered in the comic.

Storyline and excess blood aside, can we also address how the cover — which was designed by Eric Powell, who’s most notable work was The Goon — features a skeleton with every orifice on its skull defiled by nails and its head decorated with thorns? It bears an uncanny resemblance to Jesus Christ’s most iconic iconography? Maybe it’s just us but we can’t put it past Slayer to include religion in their imagery. Meanwhile, the protagonist, featured on the second cover, is clearly a poor man’s Jesse Custer. Nevertheless, they’re rad in their own right.

View a few of Repentless‘s pages and its covers below:

Pre-order the comic via Nuclear Blast.