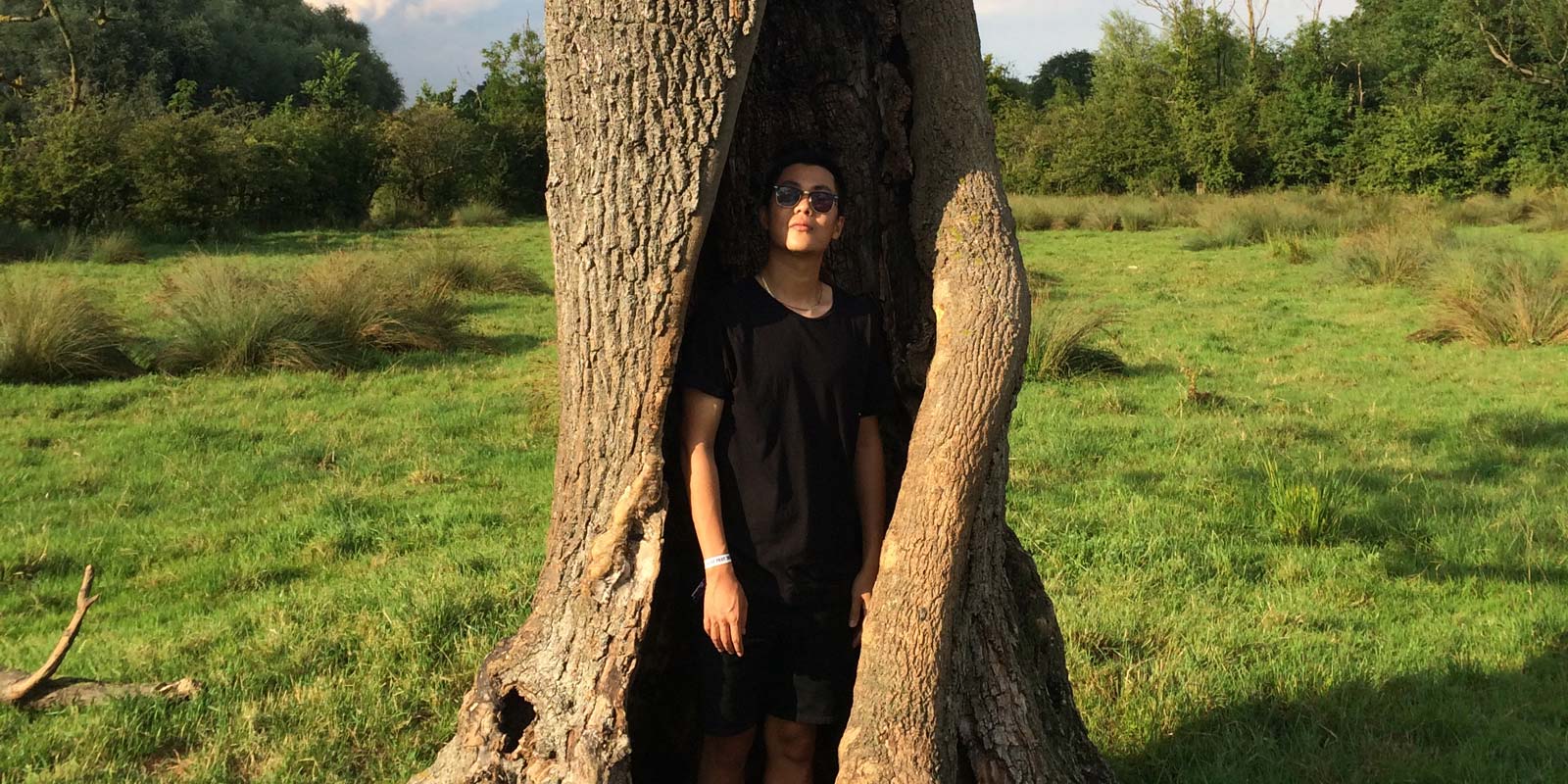 The term ‘sinogrime’ (birthed by Kode9 via an eponymous mix), denoting the melding of Far Eastern influences with bass-heavy genres (grime or otherwise), was at point used on a satirical level by Fatima Al Qadiri for her masterful album Asiatisch. But the prefixes ‘ethno-‘ and ‘sino-‘ are very real to Beijing act Howie Lee – figurehead of Chinese label Do Hits and possibly the most known name in China’s nascent bedroom producer scene. After all, he’s gotten recognition from Boiler Room, Noisey, i-D, SXSW, and more. Most impressive of all, his debut LP Mù Chè Shān Chū was released via Los Angeles’ beat scene label Alpha Pup. And that’s not mentioning the cosigns he’s received from the likes of BBC’s Gilles Peterson and Rinse FM’s Plastician, along with past gigs that saw him sharing the same stage as UK luminaries Kode9 and Bok Bok. Ahead of his first show in Kuala Lumpur, JUICE managed to speak to the man on being labelled as an exotic bass music act, Beijing as smoggy dystopia, and defying China’s blockage of Western social media platforms.

You came from a band background, and as we understand it, it was your stay in the UK that contributed to your becoming an electronic act – how did you first get involved in the DJ scene?
[Actually,] I was DJing before I went to the UK. I was playing in a band and at the same time I was DJing at parties as well. I start to take it more seriously around 2009, been DJing/playing my stuff out [since].

How did Alpha Pup and you connect? And was the LA beat scene a big influence on you as the UK scene?
2015, I was in LA with Mike Gao and he just released his album on Alpha Pup. He introduced me to Daddy Kev and I sent him some of the shit on my album, and he loved it. The whole beat movement defo influenced me a lot – Fly Lo is my biggest ideal, and those people have been making hip hop and electronic music on a whole new level.

Your recent album, Mù Chè Shān Chū, is frequently described using adjectives like ‘exotic’, ‘ethnic’, etc., and prefixes like ‘sino-‘ and ‘ethno-‘ by Western publications. Do you feel like there’s a conscious branding of you as an exotic electronic act? Or do you welcome that kind of acknowledgment of your music?
I’m really into those Far Eastern sounds. And I always have a feeling that I can put those sounds together with all the other influences I grow up listening. So ‘sino-‘ to me is really geographical. I don’t really mind how people see it; it’s like if I put some Chinese ingredient to a Western recipe, does it instantly become exotic?

On the same note, what do you make of Fatima Al Qadiri’s Asiatisch where she was actively attempting to play with the Western idea of Orientalism, even going as far as to call the album ‘sinogrime’?
Yeah, I think like what I said, it’s difficult to judge, and even the artistes [themselves] won’t [find it] easy to tell what they really think about their work. I think ‘sinogrime’ is propaganda, or maybe it’s like an image in everyone’s head, this chaotic walled city with crazy neon lights. But no one can achieve it, it’s a mystery.

Labels like Night Slugs and their sister label Fade to Mind have a dystopian quality to their music, and so do a lot of music that are offshoots of the whole UK bass umbrella. Listening to Mù Chè Shān Chū (while perusing images of smoggy Beijing), we would say it’s the same with your music too. Would you characterise your music in that manner?
Of course, yes. Beijing’s smog can be the most beautiful thing. I always have this illusion that I’m living in a city full of smog and all residency complexes got the latest air-filtering system, and everyone wears masks. That’s a post-Olympics Beijing.

You were quoted saying the most enjoyable thing about DJing is when it involves a lot of your own music. Now that you’re playing Mù Chè Shān Chū live alongside drums by Zhang Yang and live visuals – do you still find it necessary to play DJ sets anymore?
I’ve thought about this a lot. I can still play more clubby works in my DJ set, [and I] also can play music from Do Hits as well. So my live set can experiment with more non-clubby stuff. I still think DJing is important – it’s something got me here.

Your label Do Hits is credited for tapping into China’s blooming number of bedroom producers, most of whom are self-taught via DAWs and likeminded peers. What do you make of this era’s democratisation of music-making, where the internet and technology has given everyone access to music creation and distribution?
China is crazy. If you think about the population, everyone has the access to music making, and it costs so little. Producers are still underrated but things are changing. China doesn’t have SoundCloud or any of those Western social media platforms, but China has their own platforms that allow independent musicians to spread their music and get bookings. It’s taking place [now], and currently there are at least 10 cities in China where we can throw parties to 300 people.

There was an interview where you mentioned that some of PC Music’s roster seem fake. Ironically fake. We noticed the same in quite a number of acts from the SoundCloud gen – do you think producers are treating electronic music too much like an art project where they make kitsch music in a self-aware manner?
I think the word “music” means too much right now. It’s difficult to avoid it. A lot of people cares about the social meaning rather than what the sounds really offer. Without description, does the sound explain itself?

Does irony have value in art or is it used as a crutch?
Yes, sure, it has value. Irony is tasty.

You don’t think of beats when it comes to China’s alternative music – and as we understand it, it’s still a very fledgling scene. But we’ve been approached by quite a few electronic acts from the country – namely thruoutin and AM444 – and then there’s your prominent coverage outside of China, would that suggest a more active electronic scene there now?
Yeah, things are popping! Svbkvlt, Ran Music, Rankadank, all are releasing good bass music. Chengdu Rap House is doing great as well. I mean, I think everyone is doing electronic nowadays, and those bedroom producers are starting to getting attention on the internet. Most people are still misled by EDM I guess – most people don’t get it – but I think it’s the same everywhere, and what we need to do is to build something else.

You’ve been publicised as something of a figurehead of the China underground – at least for the new generation. But before all this, was there an electronic scene back then?
Yeah, always. People like B6 and Sulumi were doing this before us, pushing underground techno and chip tune sounds. Beijing has always been a great spot for new music since it’s the capital, but getting their music out of China was way harder before .

How do you guys filter through the nigh innumerable amount of musical output online before deciding to give them a chance with Do Hits?
We know lot of producers directly, then, we’d ask them to contribute to the compilation. We get a lot of submissions as well, and we’ll listen to anything that’s send to us.

Also, with SoundCloud blocked in China, how do you guys disseminate your music?
You know, walls are all breakable. SoundCloud is blocked, so what? We’re still using it! It’s only the domestic audience who won’t use it our way. So, we basically use international platforms to reach international audience like you guys. Then, we also have to use domestic platforms such as Xiami and Kanjian. It’s a lot of hassle, but we have to [do it].

Have you guys looked outside China and Taiwan and into other nearby countries?
Yeah, always. We have lots of producers living in the West. Also, I’m personally close to the producer scenes in lot of countries such as the UK, Australia, and Brazil. I think, essentially, it’s all very similar in a way. I went to Guìyáng a few weeks ago during my China tour and I found some local rappers who were really cool and energetic about music. They used to be just hooligans on the streets, but once [they] discovered trap music, they totally immersed themselves into it. It’s a global thing, everyone now has the access to music.

Finally, if it’s not too much, can you name five acts from China that we defo need to look out?
[In no particular order]
1. ZHI 16, nice textures and samples great traditional music.
2. Jason Hou, dark and wild jungle spirit.
3. Zaliva-D, really dark and creepy shaman vibe.
4. Kai Luen, check out his new EP on Svbkvlt!
5. Damacha, my fav laowai (foreigner) producer in Shanghai.