It began as a pejorative to describe homosexual males, but the term queer was reappropriated by the LGBT movement in the ‘80s as a neutral descriptor, much like what the black folks in the States did with the n-word. In the past decade however, new life was breathed into the term as the new wave has adopted it as a catch-all word inclusive of all non-heteronormative and non-cisgender minorities, so much so that scholarly papers on the greyness that is gender-binarism and sexual diversity are commonly referred to as queer studies. Regardless whether you’re straight or not, cisgender or gender-dysphoric, queerness is now the rejection of traditional gender/sexual identities.

While the acceptance and academic fixation might be recent, queerness has been part and parcel of pop culture for as long as we can remember. In the spirit of the word’s original meaning, strange or odd, JUICE looks at some of our favourite curiosities in queer pop culture.

Pictureplane’s ‘Trancegender’
Travis Egedy aka Pictureplane’s seminal LP Thee Physical sounds like an underground club night as reflected by the zeitgeist of the sexual minority; it’s body positive, sexually diverse, gender neutral, and to quote a song title, post physical. Highlight of the album, ‘Trancegender’, is the pinnacle of the album’s underlying message. Egedy’s repeated variations of the same lyrics – “You can be my boy, and I can be your girl, genderless, and we can be trans.” – are essentially playing with the notion of gender-binarism, we’ve transcended that if you will. It’s the trans anthem pop stars like Lady Gaga wish she could have made.

David Bowie’s Ziggy Stardust Persona
Bowie’s Ziggy Stardust persona was the archetype to every androgynous rock star that came after its debut, male or female. Not only challenging the idea of the rock star by diluting it with pop appeal, the humanoid alien Ziggy Stardust shattered the image of what a male rock star at the time should look like. It wasn’t too on the nose, Bowie had announced he was gay before (only to retract it and claimed bisexuality later), but Ziggy was a persona, and this persona had an otherness to it that attracted the LGBT community and other minorities. The legacy of Ziggy Stardust can be seen everywhere from genres (glam rock, j-rock, etc.), to LGBT fashion, to the fact that he paved way for other gay stars in that decade. David Bowie, despite just playing an image, affected popular thinking, both gender and genre are just sliding scales.

Frank Ocean
Prior to Frank Ocean’s confession letter, no one would have guessed his sexuality. Here was an r’n’b singer-songwriter who hung out with Odd Future, a rap collective misrepresented as dangerously homophobic. Here was also a man, at the peak of his commercial success and debut release, decided to tell the public that his first love was with another man. Bear in mind that homosexuality isn’t something easily found in the genres his associates and he work with, especially hip hop. The gay crowd finally had a commercial success that they can identify with, and like Bowie before him, that would lead the way for more. Suddenly that line from ‘Thinking Bout You’, “… a new feel,” means a hell lot more.

Klaus Nomi
Looking and sounding like an angular mime castrati, the late Klaus Nomi was a genuine alien to Bowie’s made-up one. A German countertenor, Nomi previously sung arias at a gay discothèque called Kleist Casino in his native Berlin before moving to New York to make a name for himself among the rejects and freaks of East Village’s art scene. His brand of new wave-meets-opera-meets-Bizarro music was met with instant recognition among the fringe culture there, enough that even David Bowie took notice and had him sing for him as one of his backup singers, the Joey Arias, during his 1979 Saturday Night Live performance. This was the moment that led to his record label deal and subsequently two LP releases. While sadly Nomi was one of the first celebrities to die of AIDS, right when he was about to achieve some level of fame, his music has been brought to life as a cult curiosity thanks to the 2004 documentary The Nomi Song.

Hedwig and the Angry Inch
The most obvious answer to queer musical in film would be Rocky Horror Show, but as fun as it was as pastiche, it was still an exploitation film. Hedwig and the Angry Inch by John Cameron Mitchell – originally a broadway musical (written by the director of the film adaptation himself) – on the other hand is pastiche, but imbued with genuine pathos for the trans struggle. Darkly humorous yet not shying away from the reality of being a gender minority, the musical sees the eponymous protagonist’s struggle from being left with an ‘inch’ of his manhood due to a botched surgery, her failure to rise as a rock star, to the cathartic end where she transcended gender forms.

Burial’s ‘Come Down to Us’
Rival Dealer’s end track ‘Come Down to Us’ is a 13-minute magnum opus that has a clear message – Bevan has stated that it was a pro-queer anti-bullying epic. The song is cathartic in its aural exploration of alienation, solitude, and acceptance. It starts off sombre with his trademarked vocal samples pleading “Excuse me, I’m lost,” before blossoming into overly saccharine positivity – chimes rose gloriously as the vocal samples declare that “you are not alone.” Uncharted territory for the man who crafted the quintessential London grit record, but hey, we’re keen on exploring it just as well. 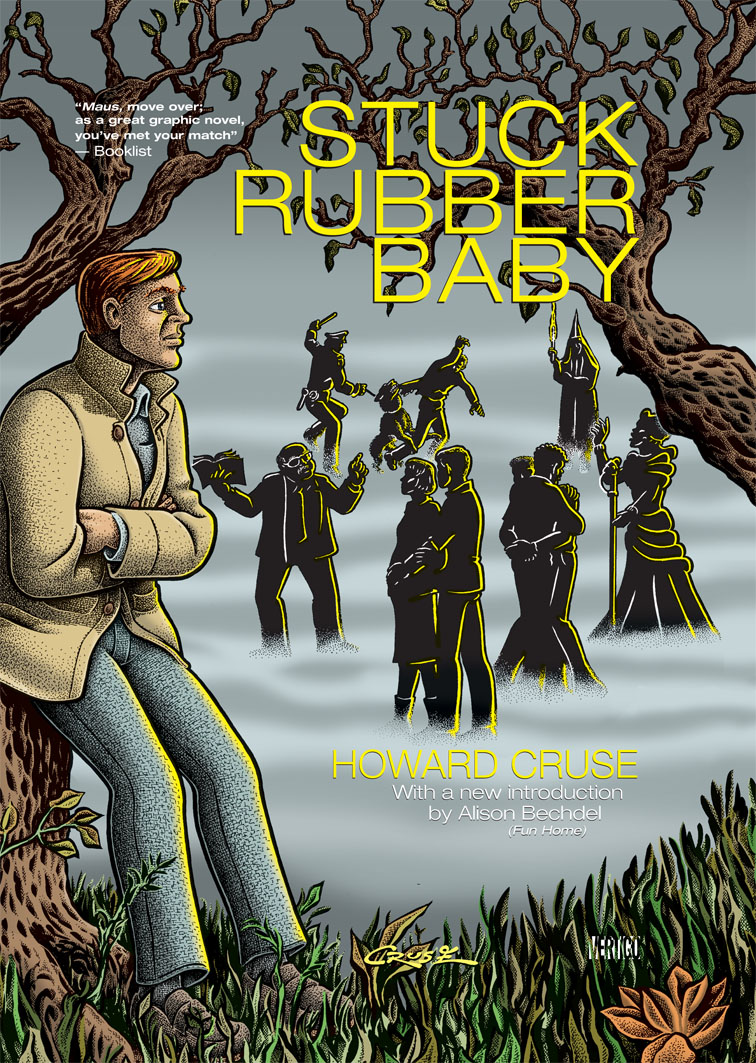 Stuck Rubber Baby
Underground cartoonist Howard Cruse’s magnum opus and first ever graphic novel Stuck Rubber Baby draws a parallel between the Civil Rights movement with a young man’s burgeoning sexuality. While far from being the first comic book to depict homosexuality, it did however set the story during a turbulent time in American history with an unflinching comique vérité. Like the best of subversive works, the book was at one point asked to be removed from a Texan library. Stuck Rubber Baby is recognised by the likes of Lambda Literary Award and American Library Association (nominated for both awards), and was awarded the Prix de la critique by Association des Critiques et des journalistes de Bande Dessinée and Best Graphic Novel by  United Kingdom Comic Art Awards. Grant Morrison
The other guy entry level comic fans would name, if not Alan Moore, as their favourite writer, Grant Morrison was recently famous for declaring that yes, Batman is indeed gay. The concept of the character at least. This wouldn’t be such a big deal if he were a no name figure in the industry – Morrison was one of the few writers in the industry to have defined, then redefined, Batman into who he is today. Much of the character’s modern traits are still largely his invention. Looking beyond that though, Morrison’s oeuvre includes subversive works like The Invisibles (Lord Fanny, pictured above, remains our favourite trans character in fiction) and Doom Patrol, all featuring characters that live on the fringes of society. Naturally, LGBT elements seeped into the fantastical, and not surprisingly both influenced other similarly fantastical creators. Namely the Wachowski siblings of The Matrix fame, one of whom is a trans person.

Bounce
Hip hop is still deeply misogynistic and homophobic. Despite that, dominant queer elements arise in some of its subgenres; New Orleans’ bounce being one. To the uninitiated, namely the conscious rap side of the community, the subgenre is problematic for another reason – it’s largely characterised by explicitly sexual dancing. If you’ve watched YouTube videos of girls bending down on stage while shaking their booty to the audience, it’s very likely that they are doing it to bounce music. You might also come across videos of drag queens doing the same. Bounce, as it turns out, has taken roots in New Orleans’ drag culture, Big Freedia being one of the more famous names in the community. Whilst some has come to derogatorily categorise them as ‘sissy bounce’ or ‘sissy rap’, Freedia decries such labelling, saying that bounce is bounce regardless of whom the music was made by.

Pussy Riot
While it’s not clear exactly how many of them are part of the LGBT community, Russia’s premiere protest group-cum-punk rock band is on the forefront of the equal rights movement in (metonymically) Kremlin land. If you’re too busy looking at memes of Putin being stereotypically masculine on the internet to know any better, let’s just say 74% of the people there view it (queerness) as morally perverse.

To find out more about LGBT rights in Malaysia, read our story on Seksualiti Merdeka here.