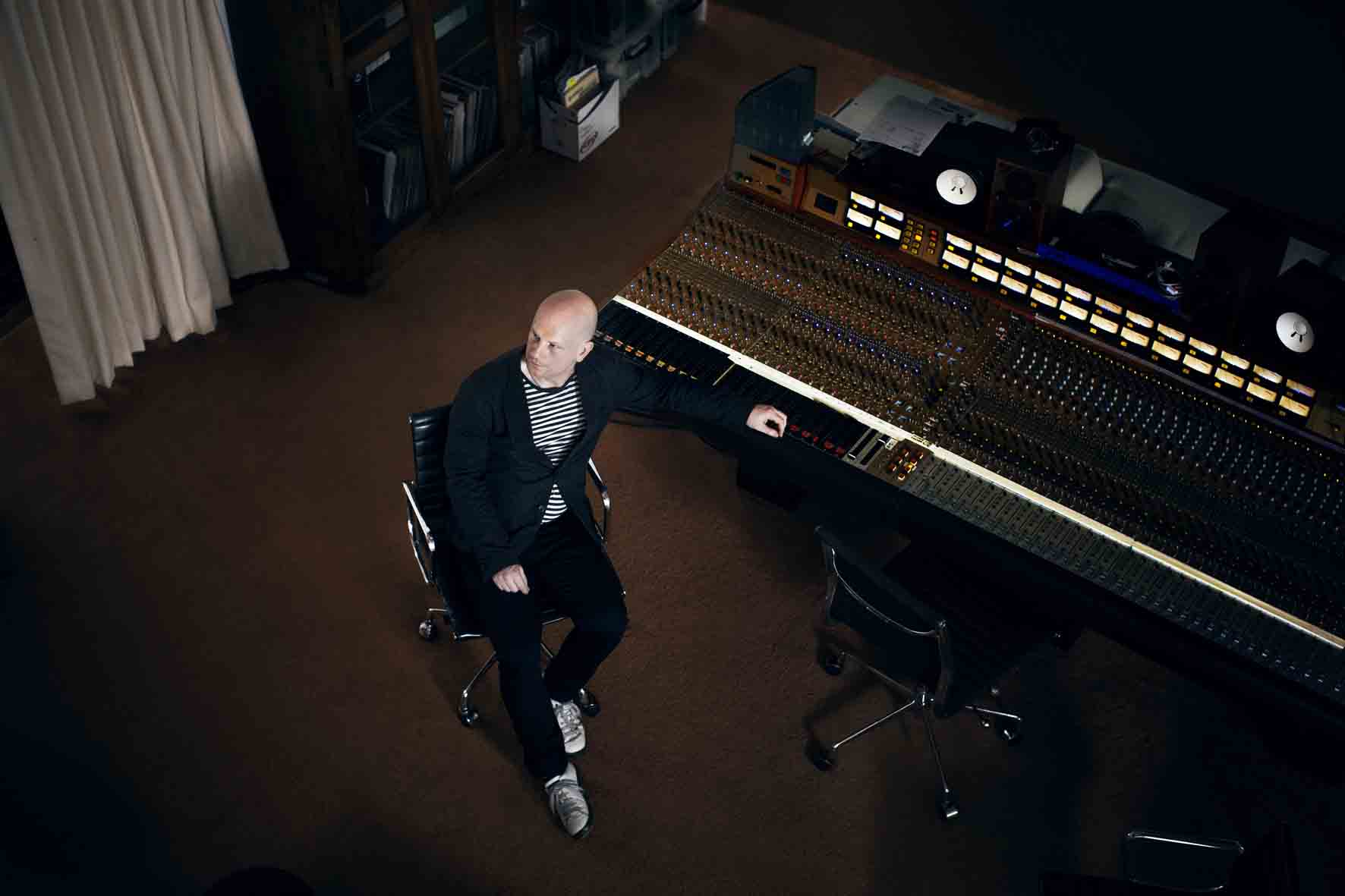 When you’ve played an integral role on records that have consistently made the top of multiple ‘all time’ lists, you’re already an indelible figure in the modern music canon. So branching out on your own comes with a different set of expectations from fans, labels, and critics alike. Philip Selway doesn’t view it in that light, though. Instead, the Radiohead drummer feels that it’s just a natural extension of his oeuvre to explore newer musical territories, as we’ve seen from his latest release Weatherhouse, in which he carries on his solo journey as a sequel to his debut album four years ago. Considerably closer to his main band’s soundscape than first solo effort Familial, partially due to Selway’s return to drumming duties, the record smartly ditches the retrofolk of its predecessor, opting for dense, genre-expansive paeans instead of weak guitar strumming and hushed vocals. Impressed by the progress from one album to another, JUICE speaks to Phil about how bodybuilding is akin to singing, getting back into songwriting, and musical dialogues.

Two albums in, what would you say is the Philip Selway sound?
I would hope that there’s warmth to what I do, and an intimacy. Lyrically I try to make things direct and emotionally recognisable. I’d say that I hope that from Familial to Weatherhouse, there’s a broadening of the sound, and especially on Weatherhouse where I drummed – Glenn Kotche from Wilco drummed on Familial, which was brilliant by the way, [but] I think that with my drumming and singing together, there’s a much larger representation of my sound [on Weatherhouse]. Also, a lot of [the sound] depends on the musicians you choose to work with. On Familial I was working with Lisa Germano, Sebastian Steinberg, and Glenn and Pat from Wilco, so you know, there’s a very distinct musical dialogue going on there. And with Weatherhouse, I’m working with Adem and Quinta on the record – we’ve worked together in my live band for Familial – the sound is very different; it’s always a different musical dialogue [when working] with other musicians.

Going back to what you were talking about, you let go of your drumming duties for the first album, but you went back to it due to Adem’s coaxing. Why did you let go of it on Familial but decided to come back to it with this one?

On Familial, I was starting from the ground up in terms of singing and songwriting and finding my singing voice, and I think part of it was that I just didn’t have the headspace to think of drum parts. I wasn’t hearing them. And then I did a project with Neil Finn called 7 Worlds Collide, and that’s how Glenn Kotche came about – he’s an amazing drummer and percussionist. He just brought these lovely, subtle, rich textures to that record and elements which I just wouldn’t have thought of. But I think having gone through that process on Familial, I was beginning to have the confidence in my ability to write songs and find a singing voice. So, that confidence freed up some of my headspace to think about drum parts on this record, and both Adem and Quinta were very encouraging and supportive of me – giving me a lot of space to develop my drumming ideas, and throw a lot of ideas at it. And again, as a Philip Selway solo record, it gave a much fuller representation of me musically. Also, we decided when it was just the three of us getting into it, we wanted it to sound like a band and having my kind of drumming would be very appropriate for a Philip Selway band.

What’s the significance of the album’s title?
It’s the lyric from the record off a song entitled ‘It Will End In Tears’, and when I started to talk to the artist who did all the artwork, a man called Ted Dewan, one of the things that he was drawn to from the outset was this concept of a weatherhouse, and you know, he reflected on that, and I like the whole idea of a weatherhouse – that it seemed to be a wider image of the record. There’s a lot of different weather musically and emotionally on the record.

You and Thom have solo projects, and Jonny scores films from time to time. Does being in a band not fulfil you creatively as an individual? Or conversely, does making your own solo stuff rejuvenate your creativity when in the band?
Oh, very much the latter. I mean, Radiohead has covered a lot of ground musically. And if that were my one musical outlet, I wouldn’t be disappointed. But we’ve been there for quite a long time now, and I think for all of us there are a lot of things that we want to try musically that may not be appropriate in Radiohead, within the whole dynamic of working within the five of us. So anything outside of that, you kind of develop your musicality and that seeps back into it. I think you can work through some musical frustrations, if you like, and just get a better sense of your own musical voice. And then you bring all the elements back into Radiohead again and it moves that process along as well. Also, that’s a very positive aspect of Radiohead that you bring into your own records as well.

Some magazines have described Weatherhouse as closer to Radiohead when compared to your first solo album. Being from such an iconic band, does this association hurt or help you more?
I think the experience that I’ve built up over the years of being in Radiohead has definitely set into what I do as a singer-songwriter, and other things as well. We were working in Radiohead’s studio as well. It’s a fantastic place to work, so that’s all very big elements of being Radiohead. And then when the record’s released, I’m in a fantastic position where I hope people will at least listen to the record. I think more people will listen to it because of that Radiohead interest. And from that initial point then it has to stand up in its own right. And I hope, that’s what it does – it’s very much an entity within itself!

Was it a conscious decision to go back to a more familiar soundscape with this album?
Well, the first decision was that my drumming was there, and that’s a much more identifiable Radiohead sound there. And with Familial, I went into the studio thinking, well, this is something I’m doing outside of Radiohead, it should be something that’s very different to Radiohead, and it was. I think with this record I felt much more open to inventing those expansive arrangements that you’d find on a Radiohead material. It’s a big part of what I do musically, and I felt much more connected to that on this record. I think with Familial, if something came up that sounded like Radiohead, I tended to shy away from it – I put less pressure to shy away from those elements on this record.

Your vocals were more hushed on Familial as compared to the latest record. Would you say you’re still very much in the process of finding the right voice for your solo effort?
It’s definitely developing. For Weatherhouse, Adem really encouraged me to sing out a lot more, which was good. It’s always like body building – you have to build it up over time. The more you do it, the bigger the scope of what you can do. I mean, last week I was in New York, I did a performance on the [The Tonight Show Starring Jimmy Fallon] and I did it with a band called The Dap-Kings – they’re an eclectic soul house band, and again, you know, you sing in that musical context, and you just sing out much more. So definitely, my voice has developed a little I hope. Just as with my drumming, it’s an ongoing process of development.

Weatherhouse is dark, but still very inviting. Tell us about the themes of the album.
I wanted all the words to be emotionally direct and to raise the relationships and tensions on the record to be recognisable for it to ring through. In terms of the themes, from the first song on the record, ‘Coming Up For Air’, I wanted it to be a positive statement at the beginning. It’s very retrospective when I went into recording – to just come out there after a period of Radiohead touring and recording, which was very good. But yeah, I’m here and this is the right place to be and this is the right thing to be doing right now. And that kind of allowed me to go into, I suppose, more troubling places. You know, you can go from a good place and then go into troubling places with the experiences that you’ve had, you’ve been around for other people.

You haven’t written much – lyrically at least – since being in a band. Was it difficult to go back to writing words to your music?
Certainly not like riding a bike, it’s a long process. On Weatherhouse, we recorded all the arrangements ahead of the vocal melody. I had some lines of the lyrics as well – I knew what kind of sounds I wanted from the lyrics too. The whole process was just sitting down and really crafting the lyrics after we recorded the arrangements. And I think it took a good four months for me to go through that process, and a lot of craft went into that, but you want to cover that craft, to make the words feel more natural – I wanted the record to be more conversational. If you’ve got a record coming around, in this case four years after Familial, you want to make sure what you’re saying is an accurate representation, that it hits home. So yeah, it’s just that whole process of not letting up the words till you’re completely happy with them.

What does Thom think of your solo stuff, and what do you think of his?
As a band we’re very supportive of what each other do. Sometimes we all recognise a quality in what everybody does, a benchmark of quality that we try to push into Radiohead that we push into our own. Tomorrow’s Modern Boxes, great record, very different from Weatherhouse, and I like how they stuck up against each other when they’ve been released. And we’re back making Radiohead music now. So I think all that feeds into it.