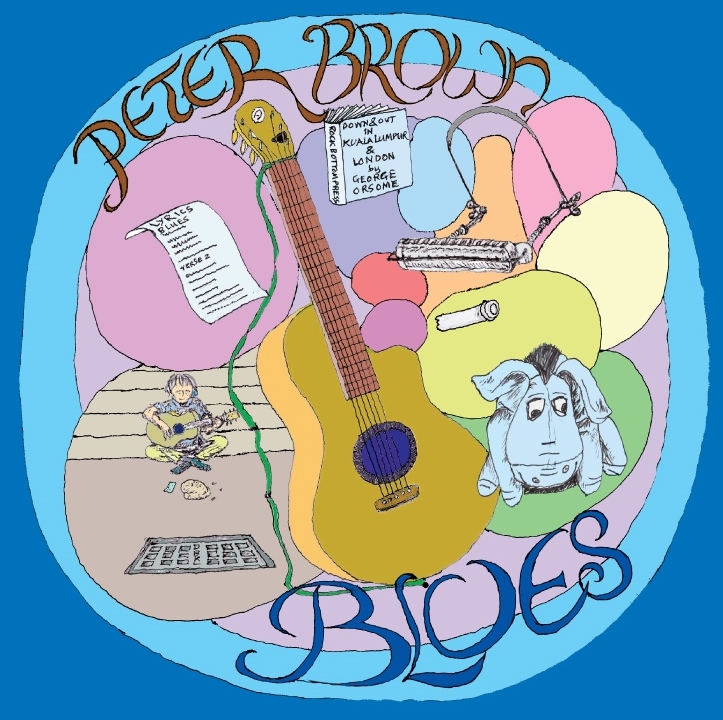 A BOY NAMED PETER
The thing about old school pubs, apart from the welcoming aroma of cigarettes and whiskies, is that the bands performing there seem to be stuck in a time warp. It’s been decades since The Eagles hatched, learnt to fly, laid that supposed Satanic stinker about some whore-infested hotel in California, and faded into the oblivion of record collectors. Yet that song along with all the rock classics of yesteryear are still wildly celebrated by the select few whom frequent these pubs. The ‘pub scene’ as they call it, is nothing more than a glorified karaoke session of classics from the ‘60s to ‘90s with some really bad current pop songs thrown in and little attention given to whether the musicians onstage are genuine in their art or just wanking over someone else’s creation.

And with that, a 72-year old Peter Brown rips into the opener of his fifth solo album Blues. ‘Gotta Make d’Music’ is a brutally honest jab against that part of the local music industry that exploits Pinoy bands while telling locals they aren’t good enough. No one is spared over the course of the song’s six-minute rap, including the pub patrons themselves who are “drinking every night to get away from the wife.” Such anger, but you have to remember, the man did start out as a singer-songwriter back in the late ‘70s when original material by local artistes was celebrated. This is also the first time we heard the lyric “fuddy dud” used in a song, so bonus points for throwing off the kids.

Just before you think it’s all angst and bitterness, Peter reveals his lighter side in a self-deprecating way. ‘If You Leave Me (I’m gonna go on drugs)’ doesn’t leave a lot to the imagination past the song title, but the infectious ska groove and surf vibe make it special. In fact, one of the reasons why Blues stands out from the rest of his albums, is the employment of an exceptional band of musicians and musical guests, notably Kevin Theseira, Rithan Vijay, Theo Graham-Brown, Paul Millot (hey, remember Paul’s Place?), Zalila Lee, Julian Mokhtar, N. Rama Lohan, and wife Markiza (who plays keyboards and provides backing vocals). Khai Bahar (known for directing such quirks as Relationship Status and recently, Cuak) engineers the album as well as lends a few guitar riffs and chords.

The comedy continues with ‘Nit Head Blues’ and to a lesser extent ‘Lesser Being’, where the driver of a luxury car is contrasted against a bicycle-bound Peter. There is a certain vintage quality to Peter’s music over the next few tracks. Though that might be clichéd due to his age, it won’t be far to drop comparisons to Sixto Rodriguez. At least by this point in the album, you’d be able to tell some of Peter’s earlier influences – all those acts he was so happily dissing in the opening track and The Rolling Stones (especially on the album’s title track).

At track eight, the album reaches its high point. ‘Golden Moonbeams’ is a succulently sweet song recalling the sound of local indie popsters Ferns, but only during the intro and interludes. Once Peter’s voice sets in, you feel the pain. Not fucking Damien Rice pain. The real pain of knowing that only death would provide relief from the pain of living. Okay, so it’s close to Damian Rice pain, just minus that annoying pristine wailing. Peter does it more naturally here – perhaps even tempting death itself.

Many a time, we’re reminded that this is a record for young people. Never mind the fact that Peter himself is a grandfather.  This album is dedicated to the struggling artiste, the newcomer, the young folks. Whether he’s being the helpless romantic (‘Jaded’) or the ambitious singer-songwriter waiting for his turn to play his two-song set at one of those dreadfully boring acoustic gigs (‘Open Mic’), Blues shows that good, immature songwriting, while not a sought-after skill, is a gift bestowed to those lucky enough to have survived the seriousness of a life-long career in music.