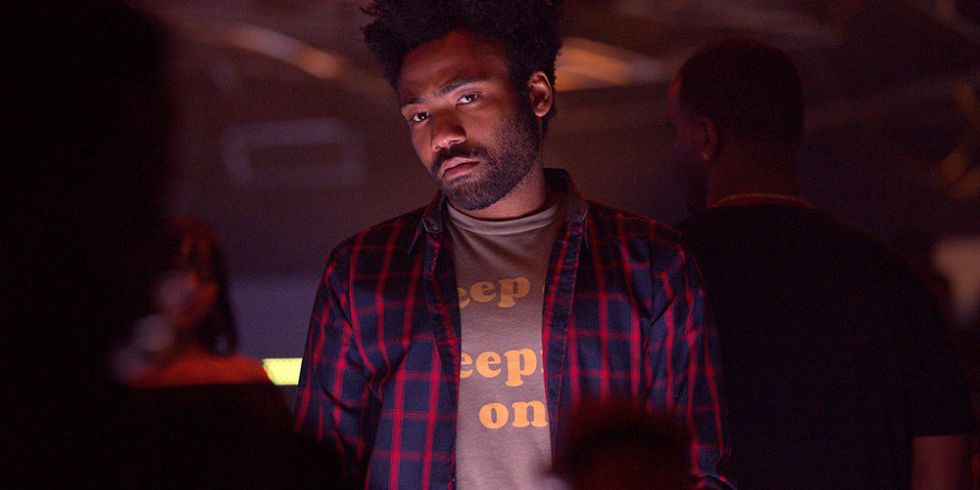 “Paper Boi, Paper Boi… Always ’bout that paper, boy If you ain’t on your grind
Then you flexin’, you’s a hater, boy…!!”

If you haven’t heard of Childish Gambino’s award-winning FX TV show Atlanta, then boi, you gots some catching up to do. This is a perfect series for anyone who loves black comedy with a touch of satire and the drama that encapsulates the daily grind and struggle of an inner city hustla trying to make it big in the rap game.

Set in a city that Dr. King often called “black mecca,” Atlanta, Georgia, this series is created and starred by Donald Glover who plays Earn, a broke homeless man from the hood. It follows his day-to-day journey of trying to redeem himself in the eyes of his ex-girlfriend and the mother of his daughter, Vanessa (Zazie Beetz), by being the manager of his underground rapper cousin, Alfred (Brian Tyree Henry), or better known as Paper Boi. Alongside these two boys, the hilarious Darius (Lakeith Stanfield) joins their misadventures as they aim to get rich or die trying to improve their lives.

This visually beautiful and surrealistic series aligns itself with the aesthetics of the city of its namesake and thoroughly captures the atmosphere of the poverty stricken neighbourhood without discriminating (neither does it condone) the lifestyle of its residents. It balances the serious social issues with intelligent (and sometimes ridiculous) comedic moments using the simple charming story of relatable protagonists, all without compromising its hip hop vibe.

For those who have been patiently waiting for any signs of the second season, time to cap the sky and let our gats smoke off. Our year long drought has finally ended with this dope ass teaser showcasing snapshots of the boys munching down some yummy wings at J.R. Crickets, hitting up the stripper joint, and chilling on the hood of their car with a komodo dragon.

What do all these preposterous situations mean for our favourite gang? We’ll find out soon when Atlanta returns for its ‘Robbin’ Season’.

For those who still haven’t caught up yet, go on and watch the first season. It consists of only 10 30-minute-long episodes, so you can easily binge watch it on the weekend while slumming on your momma’s couch.

Meanwhile, we leave you with this weird boy, Tobias, staring at you:

Atlanta is out on Thursday 1 March ‘18 at 10pm (ET/PT) on FX (being in Malaysia, y’all have to wait a day or two before scouring the torrents for the episode).

Bounce onto these babies: