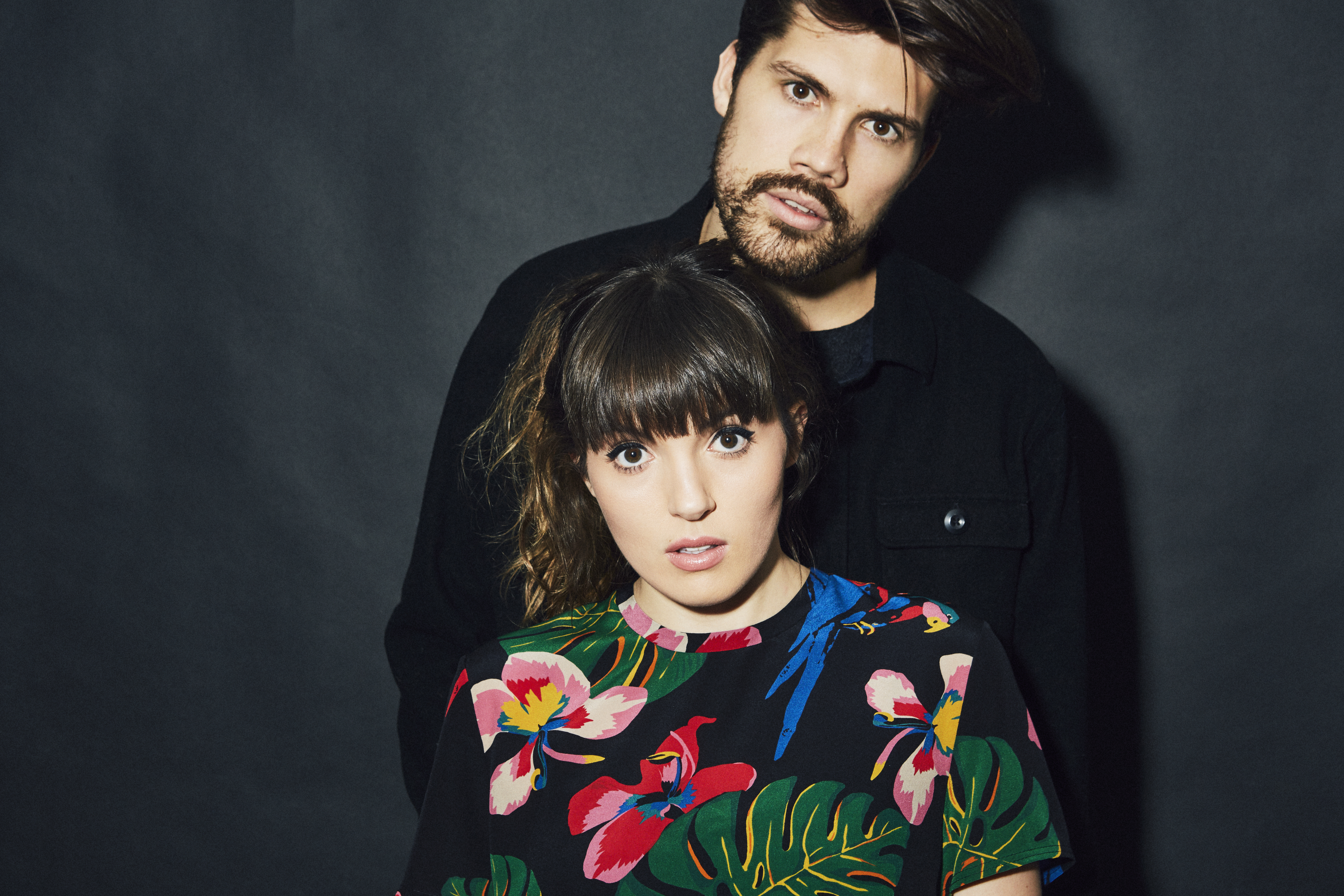 London duo Oh Wonder – consisting of Josephine Vander Gucht and Anthony West – make unabashedly emotive alt pop songs in broad strokes. So deft they are at connecting with their audiences with gossamer-light, mood-swelling pop ditties that fans are quick to share with them intensely personal stories – and some, as revealed here, would go as far as to gift them with strange curios, i.e. shark teeth. It’s no wonder then that their recent Kuala Lumpur show garnered such an audibly emotional crowd, who filled up the venue to its pax capacity to boot.

Before Oh Wonder took the stage at The Bee, Publika and greeted hundreds of their eager fans, JUICE sat with Josephine and Anthony to understand their songwriting process, the most intriguing story a fan has told them, and why writing pop songs isn’t as easy as you’d think it is.

Josephine, you mentioned in an interview with DIY Mag that you “never want to write a brief” because you prefer writing about experiences. What are some of the experiences that you two consider as one of the more defining moments of this album?
Josephine
I guess Ultralife — our new album — the title track and that word is just about [how] touring as a whole is pretty crazy. Like, the fact that we’re here in Kuala Lumpur, Malaysia and we’ve never been here [and to be here] playing  — that’s insane!
Anthony Yeah, our lives have changed a lot (laughs).
J And we have songs on the album which are about missing our family and friends back home ‘cos we’re basically touring until Christmas, so, we won’t see them for a while.
A ‘High on Humans’ [is one of the songs that were defining] because of [an experience Josephine] had on a train.

Yeah, we read about that — you talking about your love for Sriracha for 20 minutes with strangers. That was funny.
J Yeah, that was cool, just meeting strangers.
A We meet a lot of people on the road and it’s really energising, isn’t it?
J It’s incredible.
A Meeting fans is also really cool. People have stories about your music and that’s really inspiring.

“We get lots of crying and quite a few gifts [from fans.]” – Josephine

Have any fans told you any weird or extremely personal stories before?
A Everyday (laughs).
J We get lots of crying and quite a few gifts — I think the ‘weirdest’ gift, which is actually really sweet [because it] came with an amazing story, [was from this] woman in Florida who turned up with a bag of sharks’ teeth which she found at the bottom of the ocean.

Right…
J She’s a diver and the story was, her dad had died recently and she had a festival which she had booked in [much earlier] but she couldn’t bring herself to get out of her tent. Then, she heard one of our songs called ‘Shark’ playing in the distance because we were on stage [at the time], and she felt this hand appear from the sky and pull her out — she didn’t know our music — but felt better and came to watch our set. After that, she said she felt like she could live her life and found these sharks teeth for us.

Knowing that your songs has the power to validate how someone feels, is there any pressure for you two to maintain that level of comfort and almost playing the role of therapists to your fans?
A I don’t feel a pressure, I think it’s quite normal.
J I do (laughs).
A I feel enormous joy when it happens, I feel a pressure to make music that people are going to connect with, but it’s just a bonus. Like last week, we did a meet and greet in London to celebrate the album and some people were just like, “You helped me through the hardest part of my life,” and that makes our jobs worthwhile.
J I definitely felt like this new album — when we were recording — there was something in the back of my mind going “this song has the potential to like, totally revolutionise the way somebody is feeling and inspire someone or console somebody,” because that’s what music does to me — it soundtracks these revelations about who you want to be and where you want to go, and I just had that in the back of my mind, and that’s a very powerful gift that you can give to somebody.

Who were some of the musicians whom were what you two are to your fans but for yourselves?
A Death Cab [for Cutie]. They kind of soundtracked my childhood. When someone says they connect with our music, I put myself in my shoes when I was 16.
J Regina Spektor, Joni Mitchell — so many!

“… trying to write an incredible pop song is difficult — it’s such an art.” – Josephine

Can you tell us about the process that happens when you two want to write for other artistes?
A It’s dependent on who’s involved, I guess.
J It’s pretty collaborative, if you’re in a session with someone else, if they are going to sing it, I think it’s all about facilitating what they want to say and how they want to sound. Sometimes you just get in the room and you’re like, “Let’s just write the best song we can, and see what happens.”
A Yeah, [in] some pop sessions, it doesn’t matter what it’s about – let’s just write something that’s super catchy and has cool phrases in it but there are some sessions where you need to be on the same level as the [artiste].
J And I think really good pop songs are way harder to write than songs that are like “this is how I’m feeling,” I find that those pop out really easily but trying to write an incredible pop song is difficult — it’s such an art.

“It took nine men to write [Beyoncé’s ‘Run the World (Girls)’], which is so funny, I love that.” – Josephine

Why do you think there’s a stereotype that pop songs are ‘empty’ then?
J I guess it’s because it’s not always written by the people who sing them, and I feel like a lot of artistes that write songs and sing them have a deep connection to the music they’re performing.
A I can’t imagine singing someone else’s song.
J I can’t either, but there are a lot of amazing singers who can’t write, so, that’s why that is. Therefore, it’s written by people in a room that don’t really care about how they [the artistes] are feeling, they’re just like I’m going to “get a cut, so I can make some money.” But actually, the best songwriters are writing these absolutely unbelievable songs.
A Some of the best songs I’ve written have gone through like 15 songwriters — if you actually look at the credits of some of Beyoncé’s tunes, there’s been like 10 [songwriters].
J You know her song ‘Run the World (Girls)’? It took nine men to write that, which is so funny, I love that. That’s probably why they’re incredible songs because they had so many people working on them.

So, even if you add like a single word to a song during one of the many rounds, you still get credited for it?
J Yeah, even if you’re [just] in the room you get credit for it.
A If you say nothing, you still get it too.
J We’ve had that before where we were at one of our sessions and there were people that do nothing, and you’re just like, “Why are you sitting here doing nothing but get credit for it?”
A It’s an interesting world.

Yeah, truly. Oh Wonder started off as a side-project at first, right? Did you two have a business plan when you got into it or was it a “We’re going to do this for fun, and see where it takes us”?
J We’re still doing it for fun (laughs).
A We still don’t have a plan, we think day to day.

Oh Wonder performed at The Bee, Publika as part of the Upfront series on Wednesday 19 July ’17.